The coast which just keeps on giving 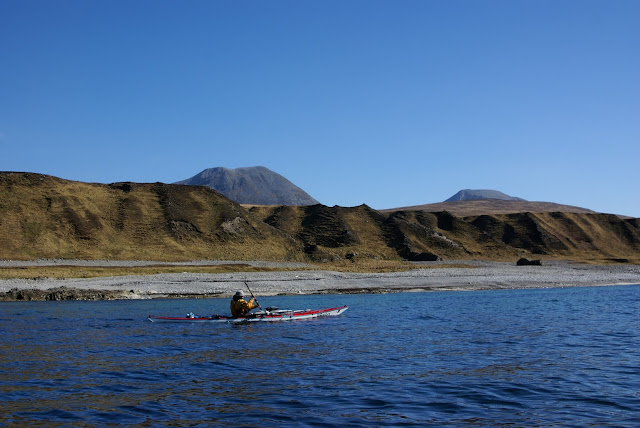 Back on the water the small breeze had died away and it was pleasantly warm as we paddled along the SW shore of Jura under a cloudless blue sky.  It was a very relaxing section of the day's paddle, even the wildlife seemed relaxed.....

....this Otter surfaced near Mike's boat, then dived twice - each time coming closer to inspect us; it was a very close and intimate wildlife experience for the three humans! 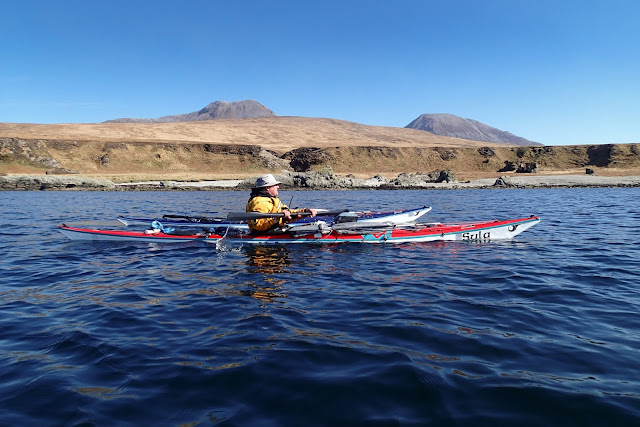 Two of Jura's distinctive mountains, Beinn an Oir (mountain of gold) and Beinn a' Chaolais (mountain of the kyles (narrows)) dominated the view as we made our way south.  In order to make best use of the fast tidal stream in the Sound of Islay we would need to wait until the south-going stream which would start at 1621 became well established.  That gave us plenty of time to slow our pace and enjoy our journey on this superb coast...... 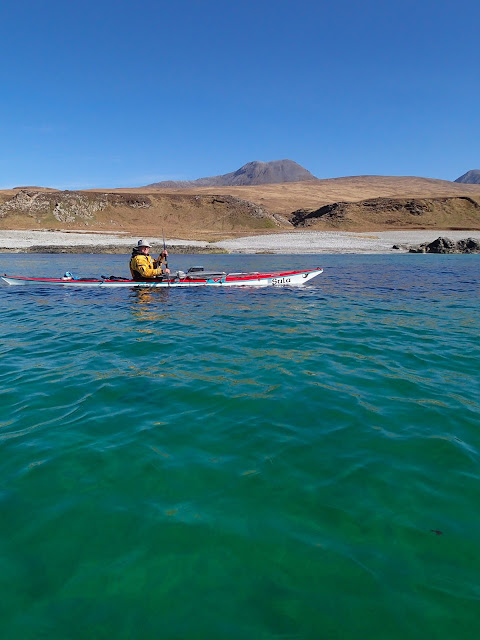 ...and there was more than enough incentive to just stop and admire the colours of sea, land and sky.  As if this riot of colour wasn't enough, the Jura coast came up with yet more interest..... 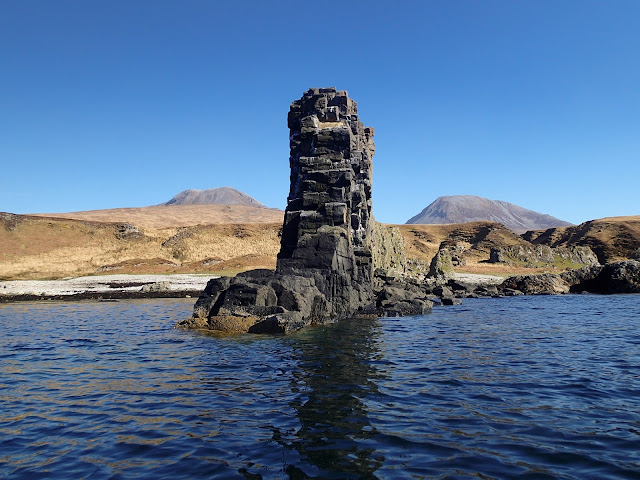 ...as we approached the first of a whole series of dramatic free-standing basalt dykes.  Formed when intrusions of molten magma flowed upward through near-vertical cracks, faults or joints in pre-existing ancient rock and cooled, the dykes cut across the planes of rock into which they intruded.  As the basalts are usually harder than the surrounding rock, they weather much more slowly and are left as isolated blades, stacks and towers..... 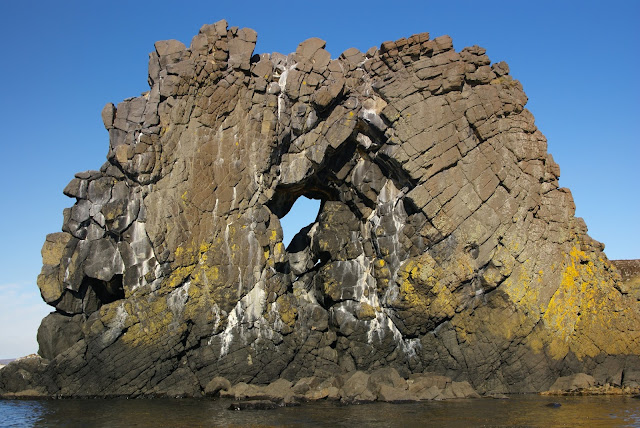 ....some of which are very dramatic.  The Jura shore south of West Loch Tarbert to the entrance of the Sound of Islay contains a whole swarm of dykes and we passed some superb examples. There was absolutely no way we were going to pass this white sand beach framed on each side by dykes - the perfect place in which to sit and wait for the tide to build. 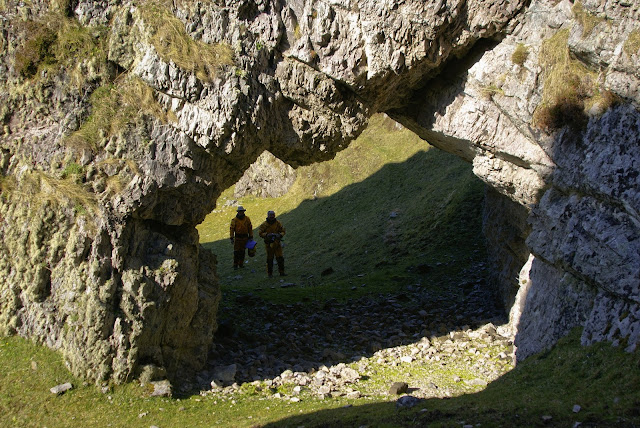 Exploring above the beach brought us to this arch through the base of a large dyke.  At one time the sea would have churned through here, but it's been dry for several thousand years. 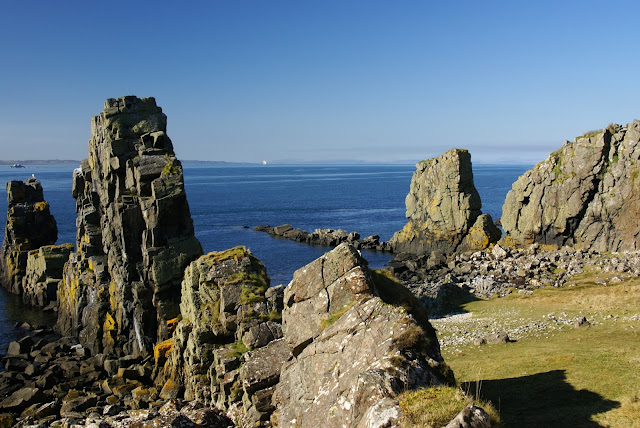 We seriously considered camping in this beautiful spot for the night, there was flat clipped turf and we'd have a lovely view of what was certain to be a spectacular sunset beyond Colonsay, particularly as the smoke plume from the muirburn would add shades to the colours.  After a bit of discussion we decided to push on once the tide had built in order to reach one of the best of the coastal bothies. 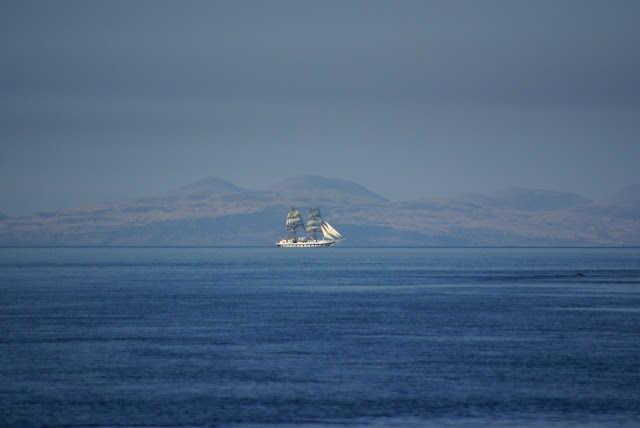 Out to sea the Stavros Niarchos was setting more sail as she cleared the Sound of Islay and would head over to anchor off Colonsay for the night.  She made a very fine sight in the late afternoon sunshine. 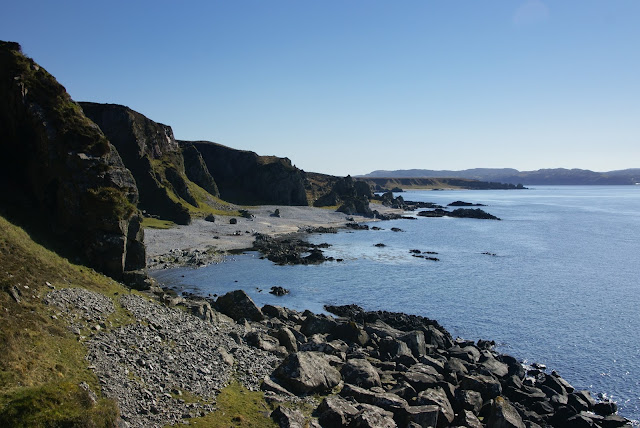 As we lingered and watched the swirls of the tide start to move south we could look along the coast towards the entrance to the narrows separating Jura and Islay.  For as far as we could see the shore was studded with dykes, stacks and skerries; truly the west of Jura is a coast which for kilometre after glorious kilometre just keeps on giving.
Posted by Ian Johnston at 19:30