After leaving Castle Haven Bay we pushed on through a series of skerries, hoping that the channel inside Barlocco Isle might still be open. Unfortunately we were too late; the tide had receded leaving a rocky finger connecting the island to the shore, as Douglas' image shows.

We were now faced with a choice of two options in order to reach the top of the beach where we'd camp, neither of which were very appealing.  Either we could paddle around 2.5 kilometres around the outside of the island and undertake a 250 metre carry with each of the boats (and the tide was still receding), or we could try the direct route, which was 320 metres but could be broken into two separate portages.

After some debate the direct route was chosen; our cargo of firewood was unloaded into a sack and an Indespensable Kayak Expedition Accessory bag in order to lighten the load and these were left on a prominent rock.  The first portage was quite short but tricky, about 20 metres of slippery rocks and into a large tidal pool, through which we waded the boats, saving about 30 metres of carrying.  The portage to the top of the beach was hard going despite splitting it into two separate carries for each boat.  A trolley would have been most useful here and on any future Solway camping trip we will pack one amongst the party.  A portage strap was used so that all three of us could move each boat, but to compound matters my strap failed on the second lift; fortunately we had two spares!  (I have since reinforced the wrist loop attachments on both my portage straps, quadrupling the rows of stitching using a sewing machine).

By the final lift, we were staggering up the beach - later calculations revealed that we carried boats laden with winter camping equipment for over a kilometre that evening.  Douglas found a camping spot at the first available patch of good ground while Mike and I walked a little further to a really fine patch of level ground with a great view.  I hadn't realised just how painful Douglas' bionic knees had become otherwise we could have shifted his tent next to ours, although in truth we were separated by less than 50 metres and we all gathered around the fire later anyway. 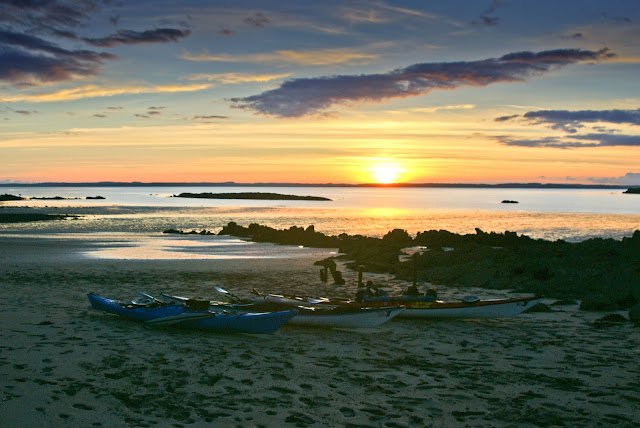 The tents were quickly pitched and there was time to admire another fine Solway sunset which developed...... 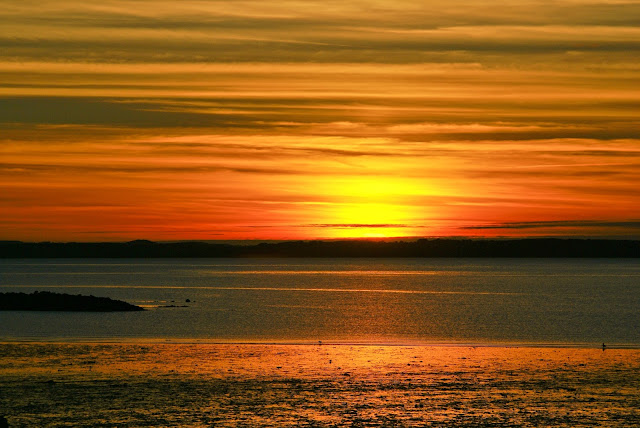 .......into a staggering intensity of colour.  It was one of those west coast sunsets in which we participated rather than spectated.  As the riot of colour faded I went back down the beach to retrieve our precious loads of firewood before darkness fell.  I missed much of the afterglow as the reflections developed..... 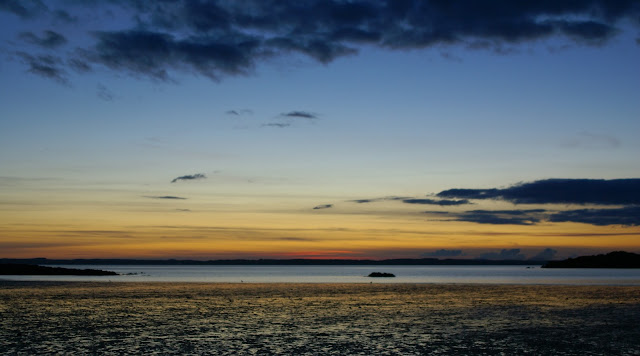 Image by Douglas Wilcox
...but Douglas kindly took some images with my camera as well as his own, capturing the gorgeous reflection of the late evening light across the wet sand. 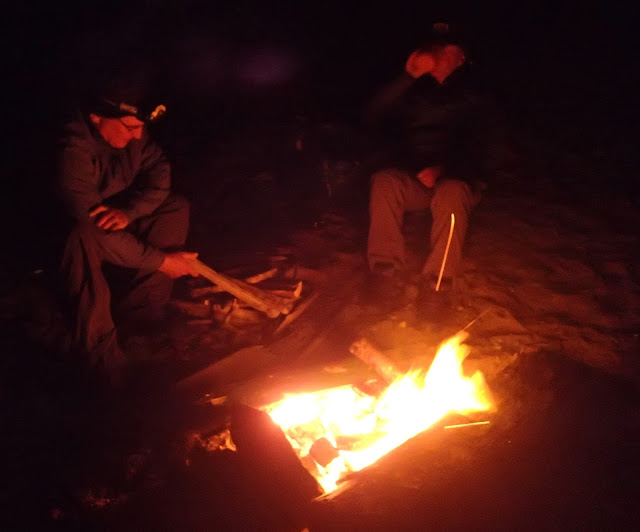 As soon as dinner was finished we set to lighting our fire.  Having gone to some lengths to collect sufficient fuel we intended to use it all!  Placed on the sand below the high water mark, a beached section of pine trunk formed the back of the fire and there were large pieces of sodden wood and a flat stone for the sides. 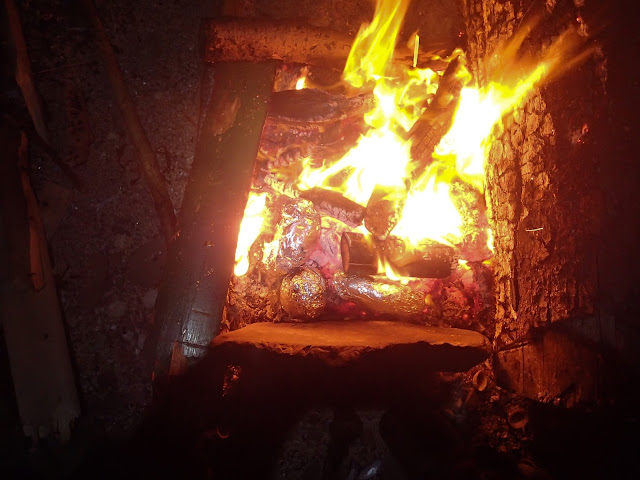 Thus contained, our fire that evening surpassed any that we've previously enjoyed.  We kept the blaze small and well-fed, quickly building up an intense and welcome heat with very little smoke.  At a suitable juncture we allowed the flames to burn down a little and placed our Sweet Potatoes wrapped in foil into the embers.  While they baked I returned to the boats to resupply our Jura as it appeared to be evaporating in the warmth around the fire.

We sat and chatted long into a beautifully clear evening, toasty warm beside our fire underneath a sky of astounding clarity.  We lost count of the satellites and meteors we spotted as the wash of the Milky Way wheeled overhead - a truly enjoyable evening which will last long in the memory.

But there was a problem.  This fire had exceeded even the recent effort on Cara and we needed some scale of reference against which to rate future camp fires.  We thought initially of a "K" scale as we were camped near Knockbrex, but we already use that designation to represent "degrees Kinlochleven" for comparing cold temperatures.  Perhaps "B" for Barlocco or "S" for Solway would work, but it needs two elements, the first digit to indicate the size of the fire, the second for the heat it produces.  By any standard, the fire we enjoyed on this would rate highly!
Posted by Ian Johnston at 20:25