The name "Hunt Hill" doesn't perhaps have the dramatic allure of a mountain name such as "Beinn a'Bheithir" (mountain of the thunderbolt) or "Gairich" (the roaring), but a look at the map of the area  at the headwaters of the River North Esk shows a sinuous approach to a summit perched at the edge of a wall of crags.  Just an hour and a half from home and with a forecast of a sparkling early November day to come, I hoped that it would give a good short day out. 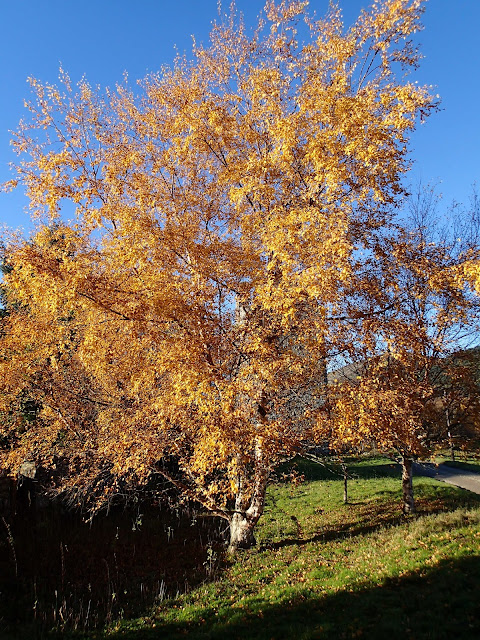 Glen Esk is one of the most beautiful of Scotland's glens.  From the lovely woods and rich farmland surrounding Edzell the glen runs north west for some 15 miles (25 km) through woodland and then increasingly mountainous scenery.  Part way along, the River North Esk crosses the Highland Boundary Fault in a series of small waterfalls at a spot known as the Rocks of Solitude.

The public road ends at Invermark, the point where the confluence of the Water of Lee and the larger Water of Mark become the River North Esk.  In Gaelic nomenclature, Inbhir (anglicised to "Inver") indicates the mouth of a river and although more usually encountered where rivers enter the sea the name here refers to the mouth of the Water of Mark.  There's plenty of parking as this is a popular walking area and is the start of the usual route to the most easterly Munro, Mount Keen.  Right from the start this walk would prove to be a kaleidoscope of brilliant colours; the birches around the car park were a breathtaking gold against a flawless blue sky. 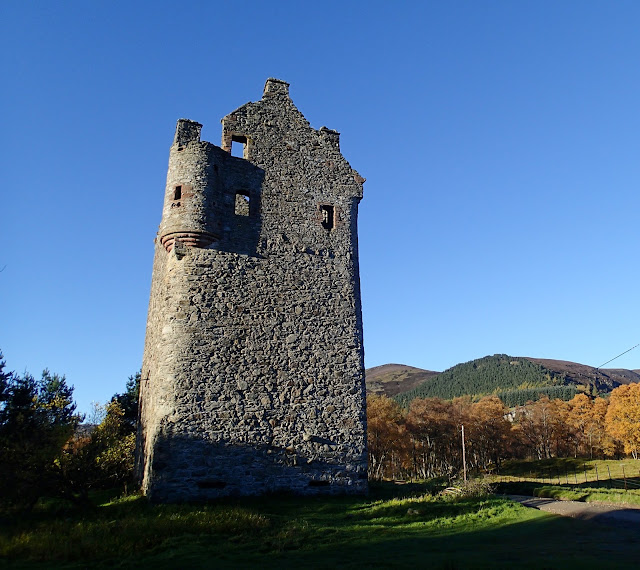 The first point of interest comes almost straight from the car park at the impressive Invermark Castle.  The present castle dates from 1526 and replaced an earlier fortification built at the same location and for the same purpose of controlling the strategic crossing from Angus to Deeside over the Mounth.  The 1526 castle was two storeys high but was added to in the early 17th century by Sir David Lindsay who removed the original parapet, added an additional storey and inserted gun loops at ground floor level. 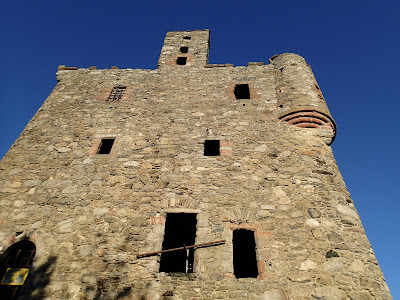 There's no door to this castle at ground level, it was reached by a drawbridge arrangement to the first floor - the door can be seen in shadow at lower left in this image. It was quite clearly built with military considerations first and foremost.  Invermark was inhabited until at least 1729 but by 1803 was a roofless ruin with some stone being re-used to build nearby Loch Lee parish church. 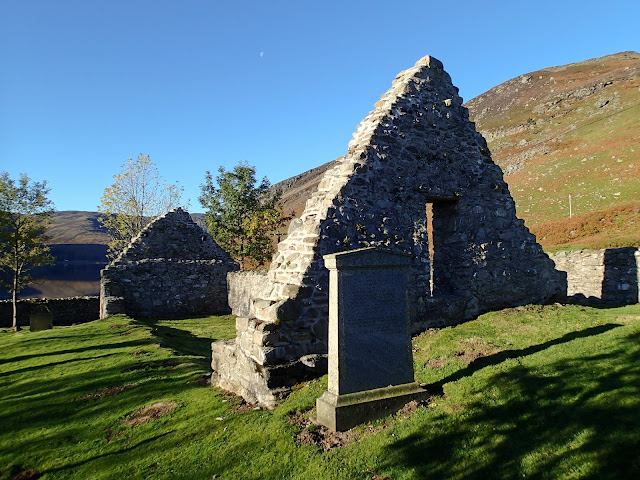 I headed past the "new" parish church and along a track to the end of Loch Lee, where there's a much older religious site, the Kirk of Droustie, also known as the Kirk of Glenesk.  The original building on this site may date back to around 600 AD and was dedicated to St Drostan, the present ruin is of unknown antiquity but is probably the building which replaced the kirk reported as having been burned by Montrose's troops in 1645. 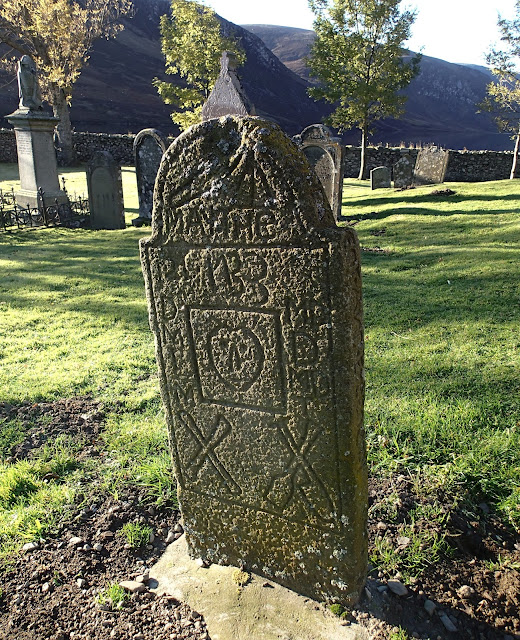 The wall surrounding the cemetery is being repaired at present and some of the fallen gravestones appear to have been re-erected.  There are some fascinating old stones, including this one from 1733. 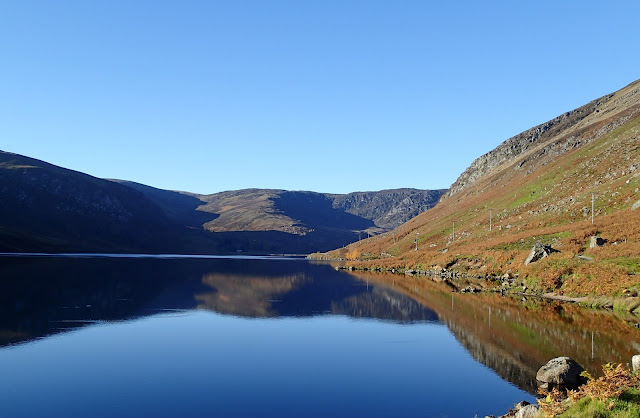 On a day like this, the Kirk of Droustie is a peaceful resting place, Loch Lee was living up to its name (Le - smooth) with not a breath of wind.  The only disturbance on the surface was from rising fish; the loch is well known among fly fishermen for its stocks of Brown Trout and Char.  It's also a reservoir providing drinking water for the Angus towns of Brechin and Arbroath and is dammed at the eastern end. 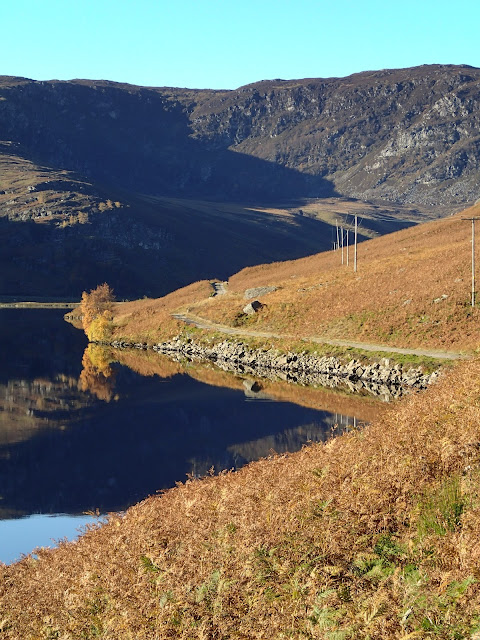 The walk along the shore of Loch Lee was very pleasant.  I'd been in a T-shirt since leaving the car park such was the warmth of this November morning - a rare and welcome treat for the time of year!  The reflections and curving lines along the lochside were really beautiful, though I couldn't do them much justice with the camera. 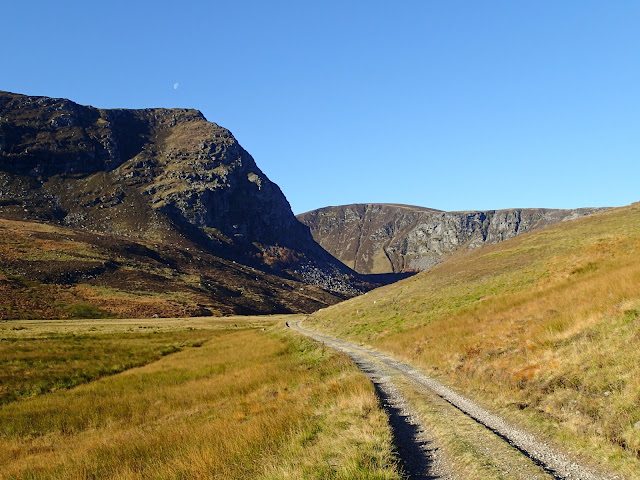 Beyond Loch Lee the track continues its curving approach to the plateau above with the impressive crags of Craig Maskeldie on the left and the wall of Bruntwood Craig a formidable barrier ahead.  The grass here was an extraordinary shade between green and gold in the bright sunshine. 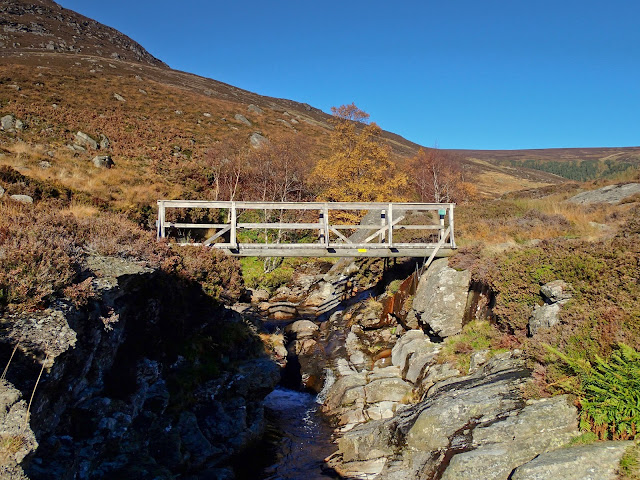 The track I was following is used by Invermark estate to access the great sweep of mid-level plateau above Glens Lee and Mark for grouse and deer shooting.  As the track starts to rise, a footpath leaves it to cross a tumbling brown burn, actually the infant Water of Lee, and heads towards a more substantial body of water.... 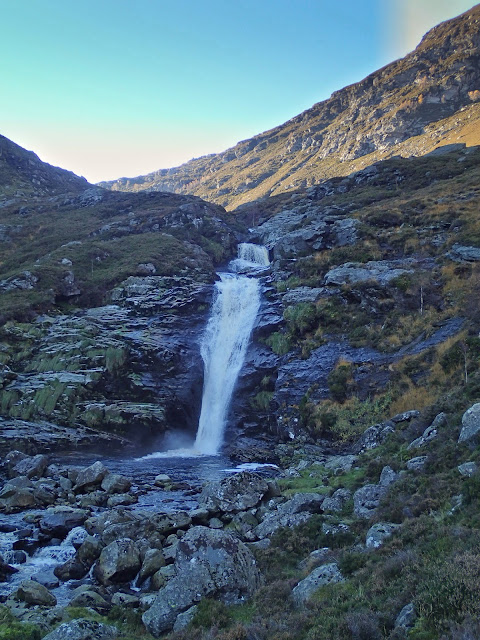 ...at the Falls of Unich.  The waterfall is visible from a long way off and at first the impression is of quite a small affair, but it gets really quite impressive close up.  This was a dry spell and after a period of wet weather it would carry a real volume of water as the Water of Unich drains quite a substantial area of high ground.  My onward route went above the falls on the right and into an intriguing hanging gorge. 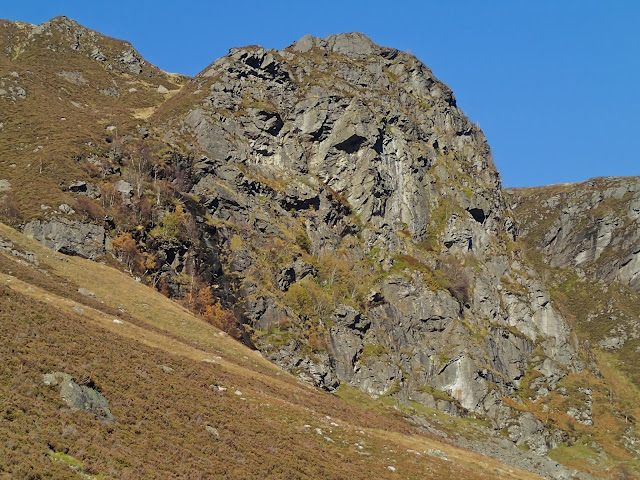 As I climbed beside the waterfall the hillside to my right was bathed in warm sunlight which was picking out the features on the face of Bruntwood Craig..... 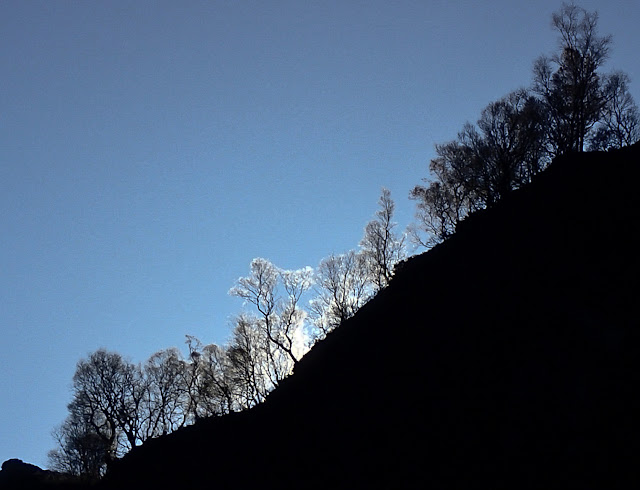 ...whilst ahead of me most of the gorge lay in shadow.  Right towards the top of the crags forming a bend in the gorge the sun was lighting the tops of the birch trees to a sparkling silver brilliance. What a day it was turning out to be!
Posted by Ian Johnston at 10:23