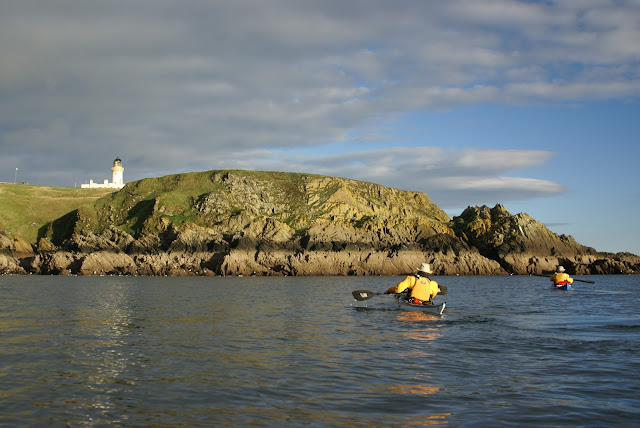 As we had time in hand before sunset we decided to paddle around Little Ross Island rather than heading directly to the beach where we'd camp. 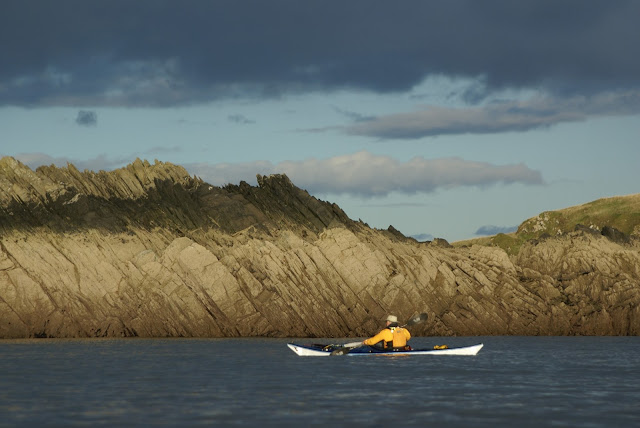 The majority of the coast of this small island is defended by jagged outcrops of rock...... 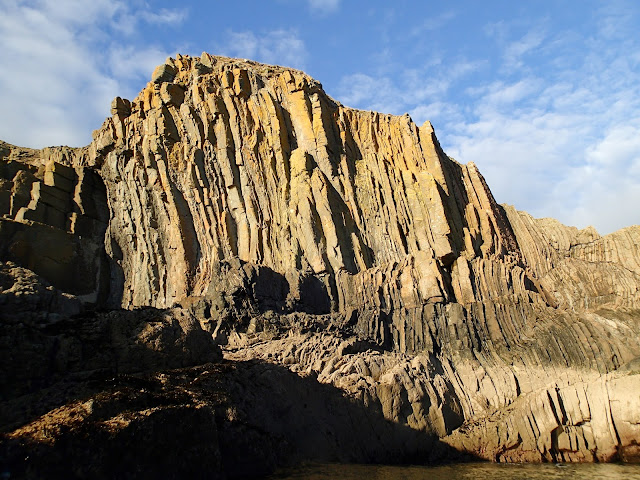 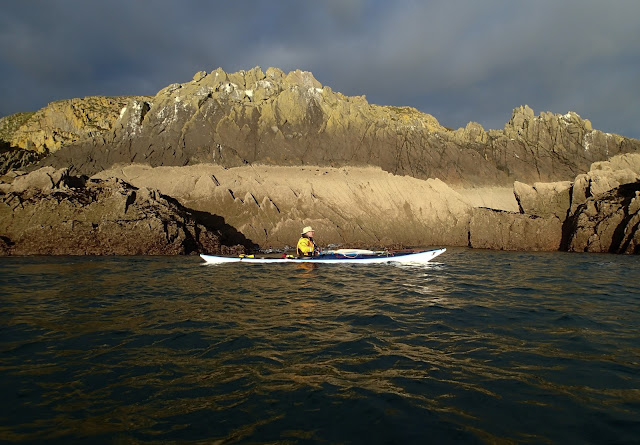 The quality of the evening light was extraordinary, almost a spotlight effect against the dark clouds which had formed over the mainland to the north.  We paddled a little faster in order that we could land and pitch our tents before climbing the island to watch what we hoped would be a spectacular sunset. 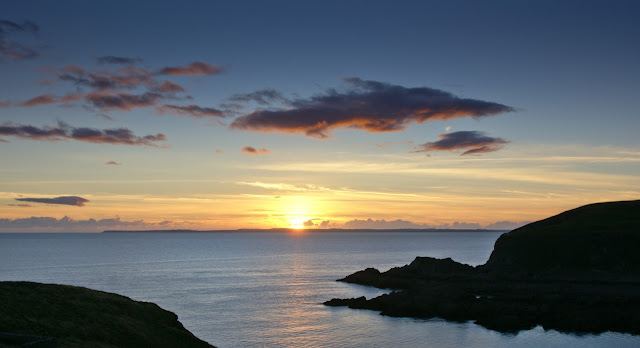 We were certainly not disappointed.  Having landed on a steep pebble beach at the north of the island and pitched our tents on a level grassy platform, we got to the summit of the island just as the sun was setting beyond distant Burrow Head.  Behind us a secondary sunset was occurring..... 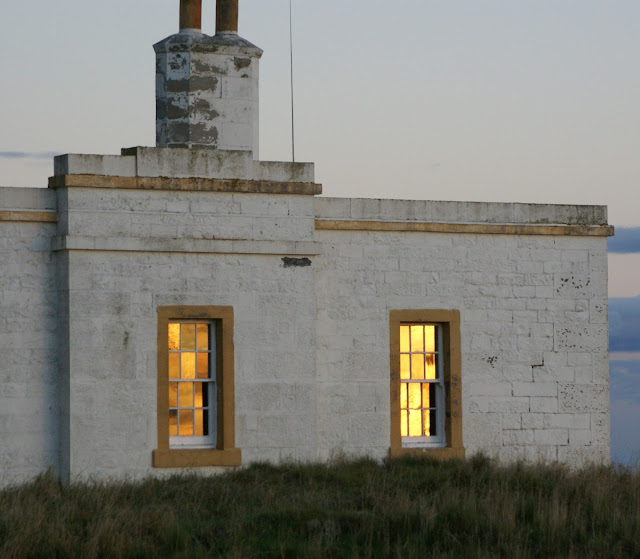 ...in gorgeous reflection on the windows of the lighthouse buildings. 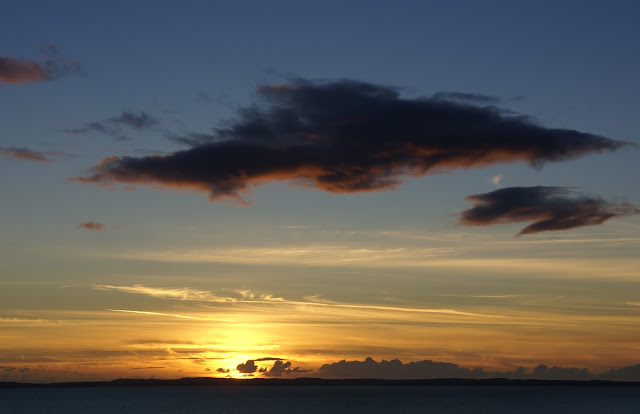 As is so often the case the best colours developed well after the sun was below the horizon.  The smoulder of the horizon was enhanced by vivid colouration on the undersides of the clouds. 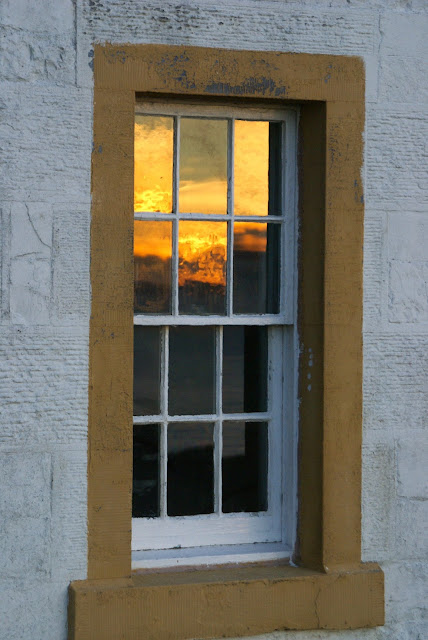 Gradually the reflected sunset crept up the window of the lighthouse building as the light changed, until there was one final flourish from the real thing...... 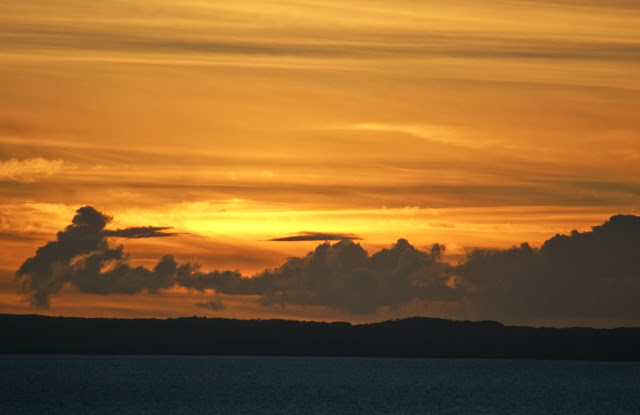 After the exertion of getting to the top of the island and then standing to enjoy the sunset, we suddenly became aware of  a chilly evening breeze which had started up - it was time to return to the tents, prepare dinner and get a fire going.

I've got no images of the evening although Douglas has some here  as there was a technical difficulty with my camera - suspected at the time and confirmed in daylight to be Operator Error.   It turned out to be an evening of minor mishaps for me; when I stood up to get another log for the fire my chair pitched forward in the breeze and was only rescued from the fire by Mike's lightning reactions.  Not five minutes later the chair leg slipped off a flat stone as I sat down and I damaged the frame by falling sideways, knocking over my sports recovery drink container in the process!

We retired to our tents quite early as it had been a long day and the breeze was chilly despite the fire.  In the small hours we were wakened suddenly by a nightmarish, inhuman screeching - and bear in mind that Little Ross Island is reputed to be haunted!  It took only a second or two for me to recognise the commotion as an argument between two grumpy Herons - and somewhat longer for my heart rate to return to normal levels - fortunately the remainder of the night was quieter.....
Posted by Ian Johnston at 17:31