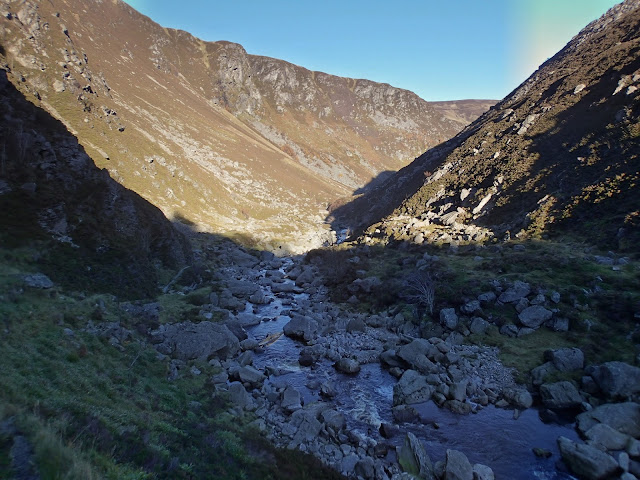 The route through the gorge above the Falls of Unich is a delight, a narrow path winding through boulders above the tumbling burn.  A Wren was belting out a scolding chatter, so loud from the tiny bird that it was creating a slight echo.  Movement across the face of one of the crags resolved itself into a Peregrine (Falco peregrinus) pursued by a couple of Crows.  As it reached the level of the top of the gorge, the Peregrine suddenly shot upwards and folded itself into the classic "stooping" arrowhead shape and into a arcing dive - the Crows took the message and scattered.

Such is the interest in this section that height was gained without me really noticing, only the very top section seemed at all steep.  It has to be said that the very top of the gorge and the immediate area of plateau above are pretty muddy and peaty, but it doesn't last long.  The direct route to Hunt Hill takes a sharp right turn at the plateau, but I decided to persevere with the muddy path a little further to look at another waterfall marked on the map. 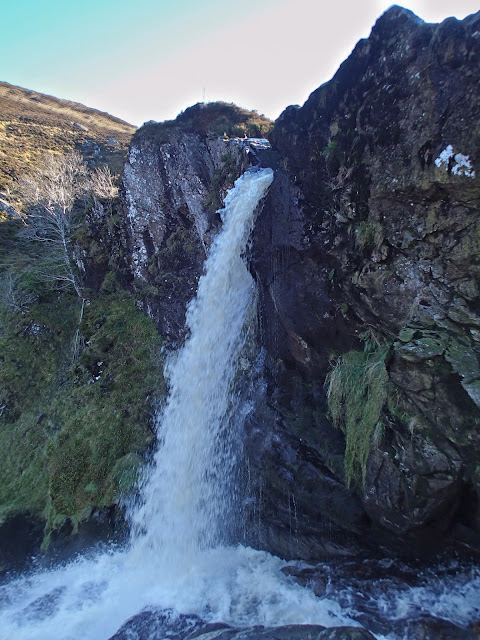 The extra few hundred metres of mud-plugging are well rewarded at the Falls of Damff (Gaelic "Daimh" - (Stag Falls).  The Water of Unich drops in two bounds over sills of rock here just as it enters the gorge.  I scrambled down to a level next to the upper fall and sat for a while just enjoying the place; getting closer to the lower fall appeared to involve some quite tricky down climbing. 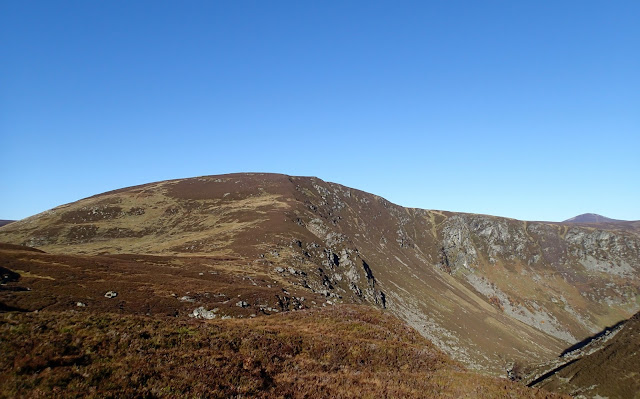 Returning to the head of the gorge the route across to the summit of Hunt Hill is pretty obvious, though there's no path to speak of.  A few deer tracks lead through the peaty ground of a broad col, then it's pick your own route up the fairly steep pull towards the summit area.  I stuck close to the edge of the crags to get the best views....... 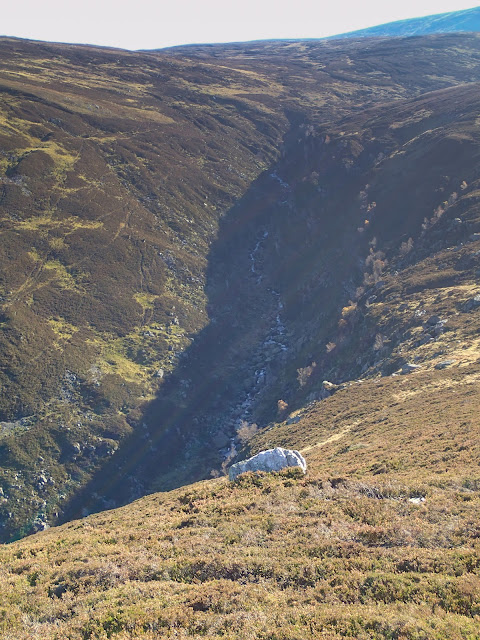 ...of the gorge, with sunlight streaming down over the sidewall - the angle which had so beautifully lit some of the birch trees near the top. 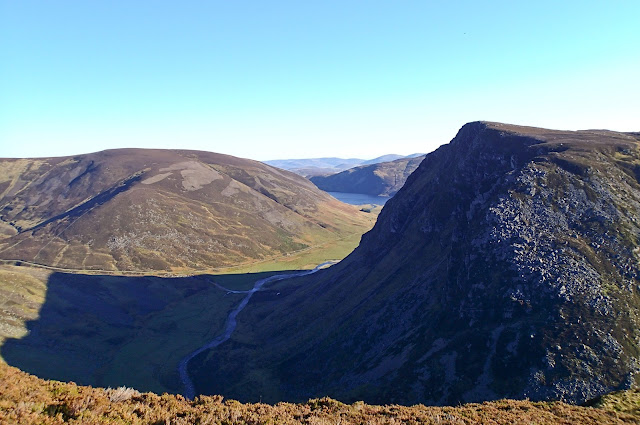 Gradually the view opens up past Craig Maskeldie and across to Monawee...... 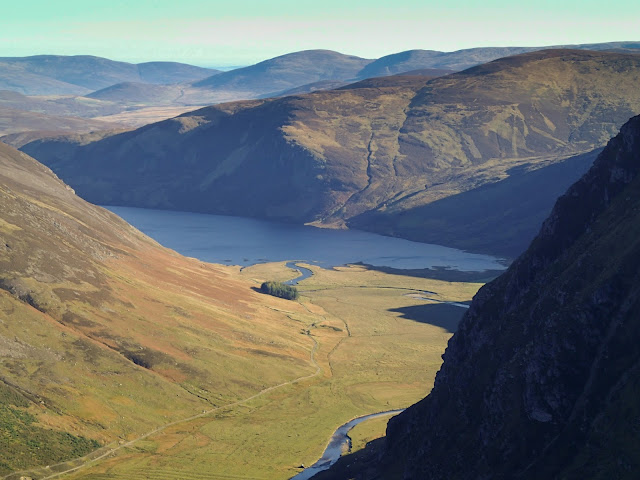 .......and between them the head of Loch Lee and the track I'd used on the approach.  The view from here really seems to mirror the approach walk, a series of curves and folds which reveal different views as you go.

There's a fairly steep pull of 150 metres to reach the summit area, and it comes as something of a surprise when the angle eases very suddenly onto a flat plateau.  The views are very wide; a real feature of the Eastern Highlands with rolling brown moors stretching away under a huge sky.  Some find this landscape boring, others find it intimidating in poor weather and some find the sense of vast space under a big sky a real joy.

Lochnagar is the prominent feature to the west, some 15 kilometres distant, with no hint of the trench containing Loch Muick which lies in between. 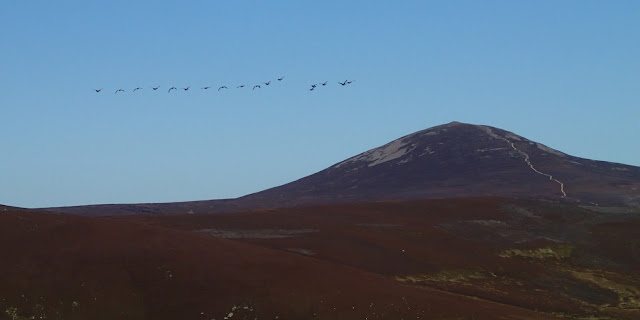 To the north the dominant feature is Mount Keen, the most easterly of the Munros (separate Scottish mountains over 3000 ft/914m). The popularity of climbing this classification of hills is ever-growing and the paths are often very obvious.

Distant calls of geese eventually resolved into a skein of Greylags (Anser anser) and appropriately they appeared:

".... far abune the Angus straths I saw the wild geese flee,
A lang, lang skein o’ beatin’ wings wi’ their heids towards the sea,
And aye their cryin’ voices trailed ahint them on the air...."


Just as described by the Angus born poet Violet Jacob in her poem of longing for home "The Wild Geese".  Born into the aristocracy at House of Dun, Violet Jacob spent much of her life away from Angus, but seems always to have had the place in her heart and her mind; she returned to Angus in the later years of her life and is buried at Kirriemuir.  Her poetry is often written in the rich dialect of the region, and from the perspective of working folk.

Sometimes known as "Norland Wind",  The Wild Geese is one of her best known poems and was shortlisted as one of the country's favourite pieces of poetry in 2006. Written as a conversation between an Angus man far from home in England and the north wind, the lyrics have been set to music by a number of singers, but my favourite version is by the Battlefield Band featuring the voice of the late Davy Steele (the words start at 2m 37secs) 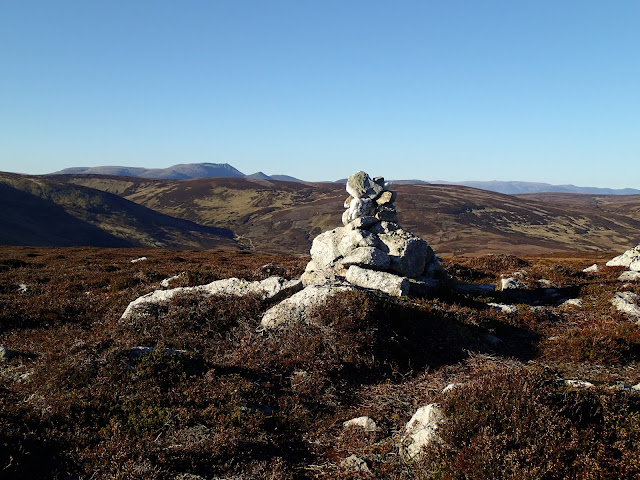 In contrast to Mount Keen, there's no path to the small summit cairn of Hunt Hill (705 metres/2313 feet).  It's classified as a "Graham" - a hill between 2000 and 2500ft high with at least 500 feet of ascent all round.  Often overlooked, this group of 220 hills usually give walks of real quality.

There was a slight breeze on the summit but it was warmed by blowing across miles of heather in full sunshine - amazingly for a November day I was able to sit comfortably on the summit of the hill in a T-shirt. 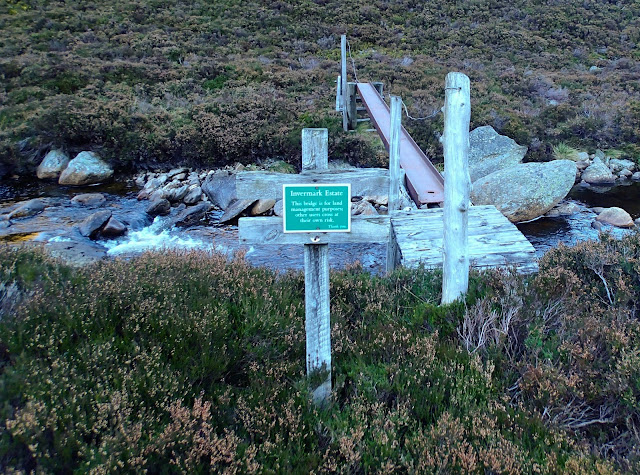 My descent route took me north-east down convex slopes of heather, then grass and moss to reach an entertainingly bouncy girder bridge over the Water of Lee, then down the track to Loch Lee. 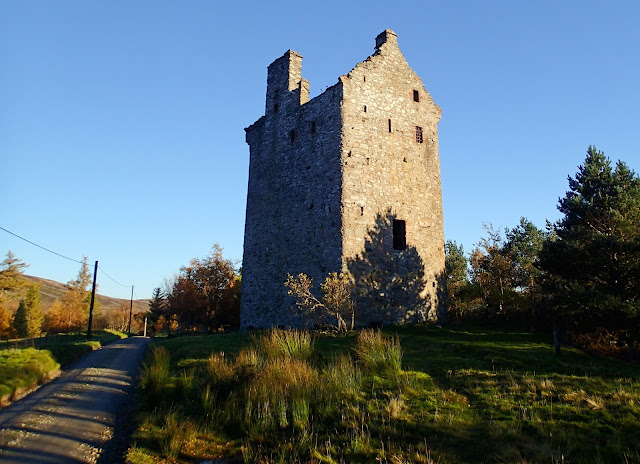 A stroll back along the loch and through the birch woods got me back to Invermark, still in glorious late afternoon sunshine.

Hunt Hill may not have the most dramatic name, nor is it the highest hill the area but it had given me one of the best hill days I've enjoyed in years.

Days like these, they're golden coins in the treasure box of memories.....


Note: The route taken on this walk is on Ordnance Survey Landranger Sheet 44 (Ballater & Glen Clova).  The distance is 18 kilometres with 460 metres of ascent, allow between five and six hours.  In poor weather, reasonable navigation skills will be needed as the high ground is pathless.  A shorter and well worthwhile alternative is to walk to the Falls of Unich and return by the same route as described by Duncan and Joan here.
Posted by Ian Johnston at 17:14