Solway sojourn - sayonara in the sunshine 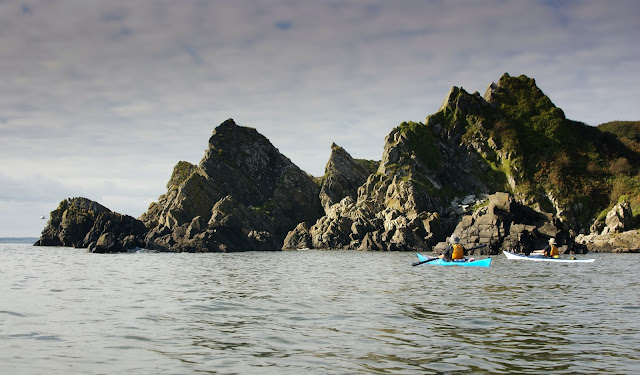 The day warmed up considerably as we crossed from Murray's Isles towards Ravenshall Point, so we took the opportunity to land and change out of our drysuits on a tiny (and fast disappearing) beach at Corbie's (Crow's) Cove.  Although it was mid October the weather was warmer and more settled than it had been for much of the cold and windy summer of 2015.

Douglas had mentioned an interesting rock formation at Ravenshall Point, so I was curious to see what might be around the corner.... 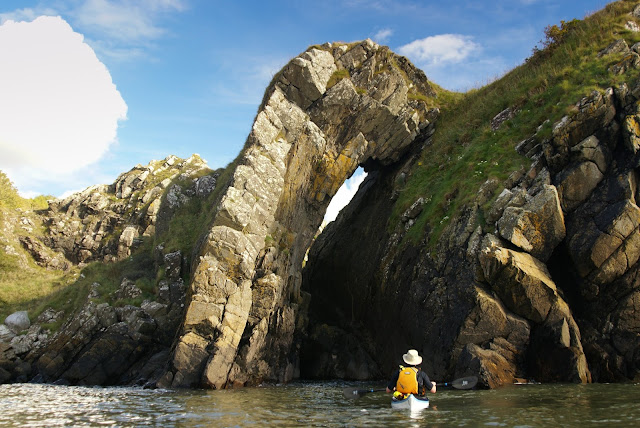 The rock formation here is really striking, a graceful sweep of pale rock forms an arch as it joins a larger sweeping outcrop with a window right through to the other side of the headland.  Remarkably this great piece of rock architecture is less than a hundred metres from the busy A75 trunk road which runs along the line of a raised beach above the present day shore, yet it could be a million miles away.  We enjoyed reversing in under the arch to get a better view before reluctantly..... 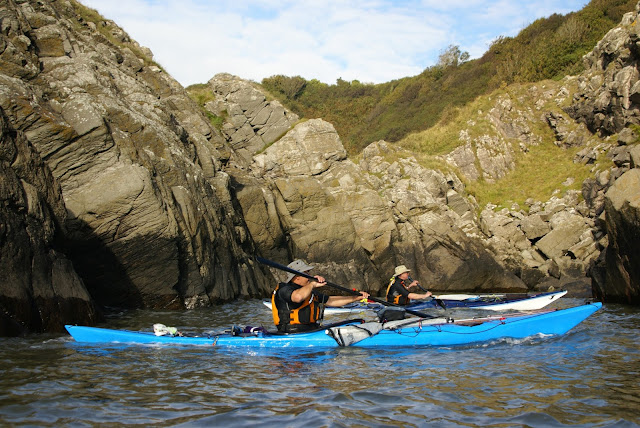 ...turning our boats and starting the last leg of our Solway sojourn.  There was plenty of exploration left to do though, the coast between Ravenshall Point and the end of our journey is punctuated by a couple of large caravan sites but also has great stretches of rockhopping..... 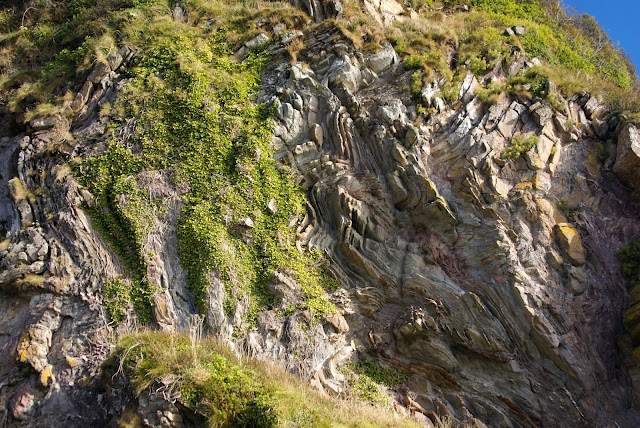 ...with more amazing rock formations.  The rock of this crag was so contorted that it was difficult to tell what the predominant plane of it might be.  Amongst the paler bands were sections of bright rose pink rock picked out by the sunshine - how many of the drivers speeding by on the road above could imagine what's just below them? 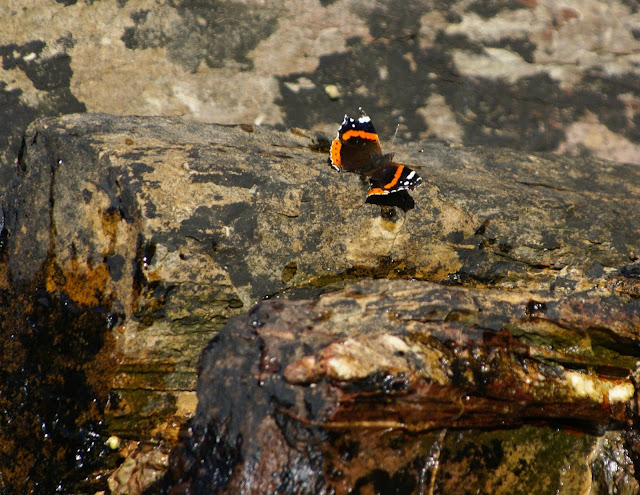 At the back of a sun-warmed cove we saw three lovely Red Admiral butterflies (Vanessa atalanta) which seemed to be actively seeking out the splashes of water on the rocks.  They were probably feeding on the flowers of the Ivy which covers most of the cliffs here.  These butterflies are unlikely to survive the Scottish winter, the species is mainly migratory in the UK with the population topped up by an influx of butterflies from the continent each Spring. 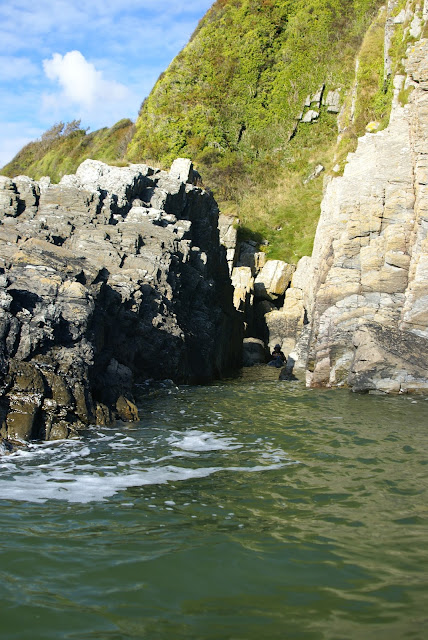 We intended to land near Cardoness at about high water to avoid a long portage with the boats so we had some time in hand to explore the intricate rockhopping opportunities.  Douglas is back there somewhere...... 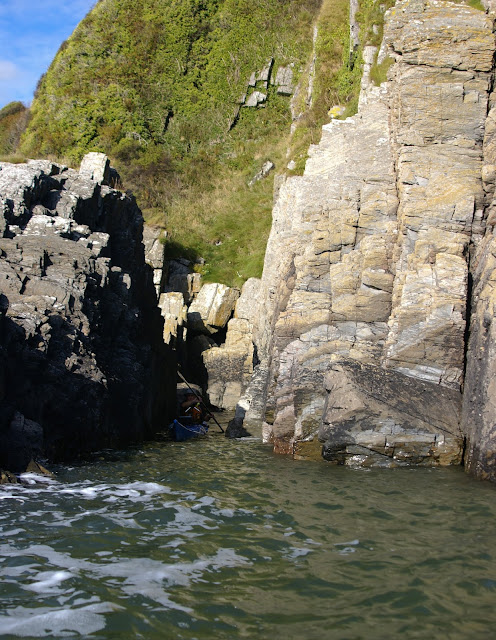 ...and showing fine style through a narrow channel :o) 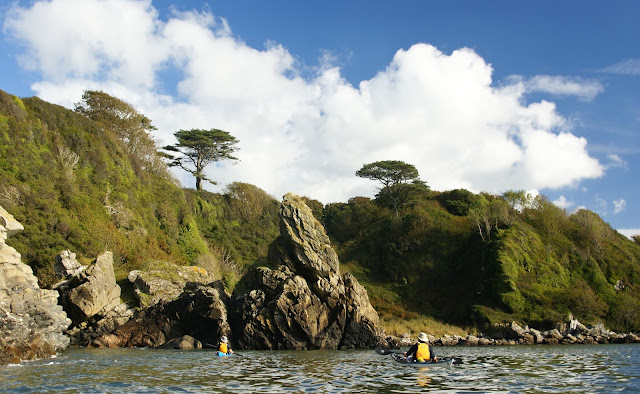 As the cliffs begin to peter out there are a series of dry coves cutting back into the level of the raised beach.  This one had pine trees perfectly placed at either end and looked almost like a Japanese coastal scene - perhaps a fitting backdrop as we said Sayonara to our Solway journey! 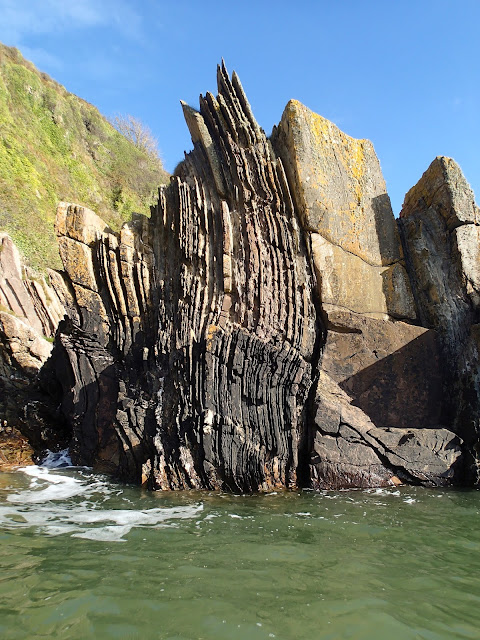 A last opportunity on this trip for us to use the term "alternating turbidite lithofacies"........... 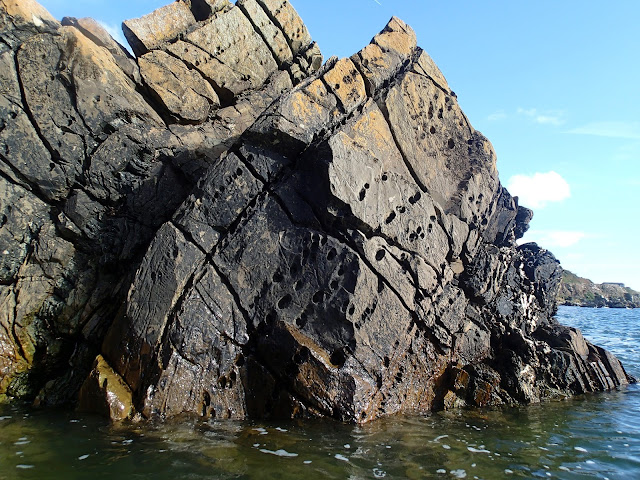 ..and another interesting rock formation - this was a darker rock which appeared to be volcanic and had lines of what we guessed to be gas bubbles fossilised within it.

We slowed down considerably as we approached Cardoness and the end of the journey; a subconscious thing that we've noticed previously - none of us really wanting what might be the last camping trip of the year to end. 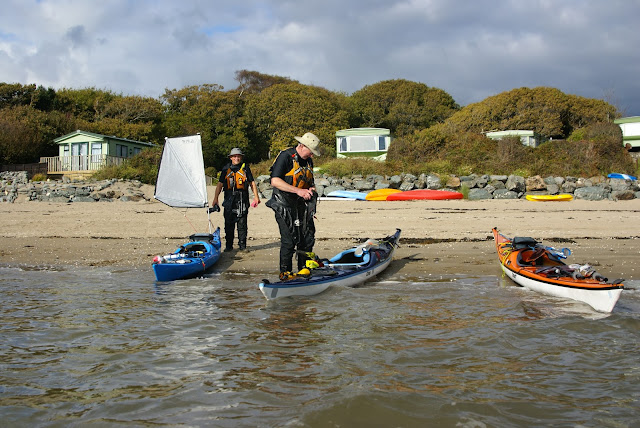 Our timing was pretty good, the tide had just turned as we landed.  It didn't take long for us to move the boats (this time with the assistance of a trolley) and unload, then we were treated to a lovely bowl of soup - thank you Alison!

What a trip we'd enjoyed - wonderful cliff scenery, wild camping under the starry skies, memorable camp fires, history, islands, intense sunsets and spectacular sunrises, a fine pub meal and calm conditions below huge skyscapes.  Our Solway sojourn might have ended but we have a host of memories to treasure.
Posted by Ian Johnston at 16:47