Narrow places - exploring the geos of the Angus coast 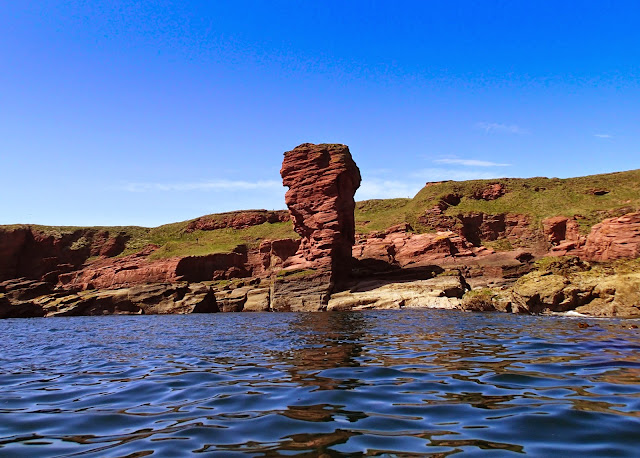 The delights of the Angus coast from Auchmithie to Arbroath weren't over by any means.  We left the beach on which we'd taken luncheon and almost immediately passed the prominent sandstone stack known as the Deil's Heid (Devil's Head). 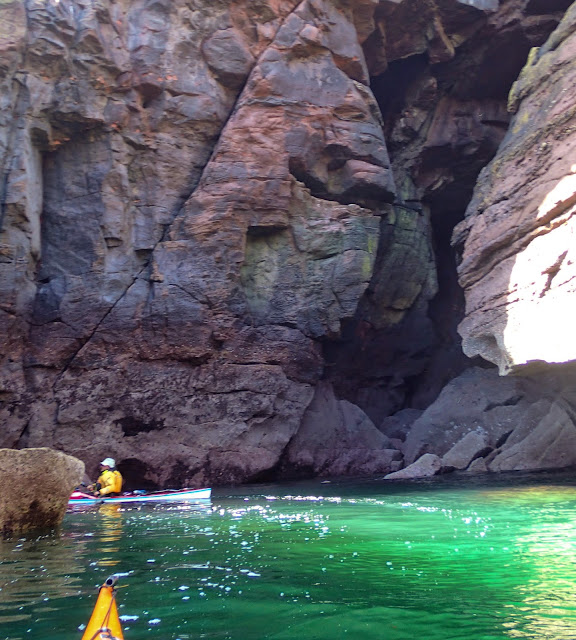 There are some great rockhopping opportunities here too, and with the sun high in the sky the pools inside the geos we paddled were lit with a lovely and luminous light; almost as if the light was shining from below rather than above. 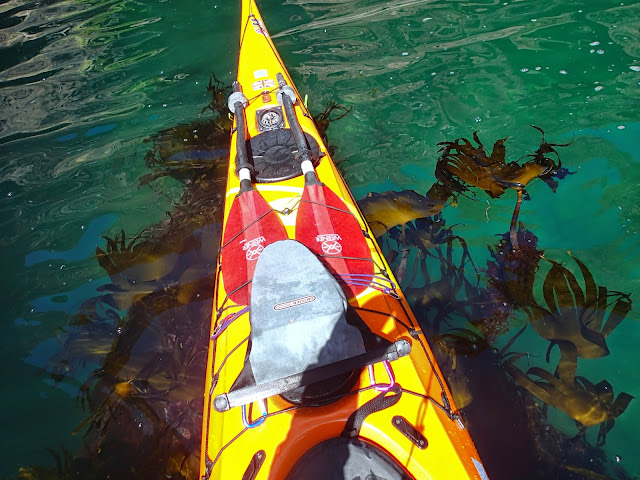 There's a perception that the North Sea is always grey and devoid of the colours of the west coast, but this is a long way from the truth; in fact the red sandstone against the water on this part of the coast is one of the most colourful sights anywhere. 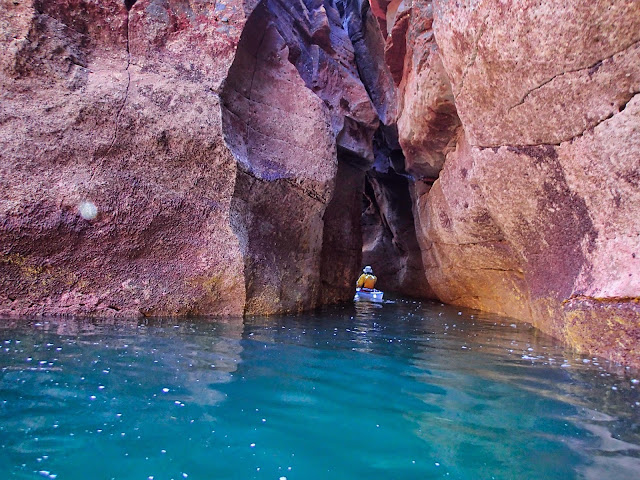 In the calm conditions we were able to thread some narrow channels which wouldn't be advisable with any swell running...... 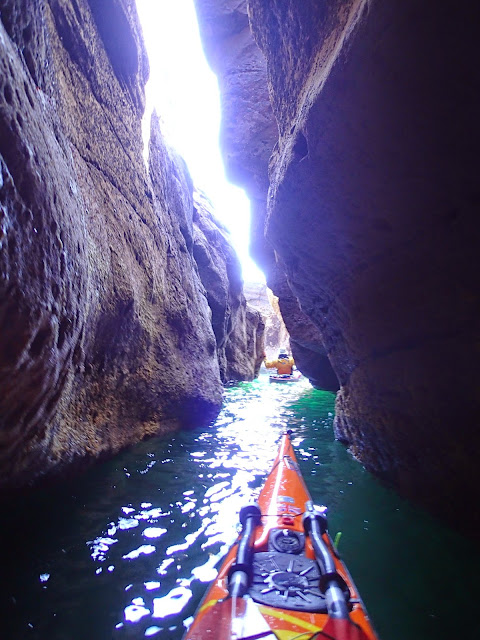 ...including one which narrowed to just about shoulder width and required us to propel ourselves through using hands on the rock.  The slant of the rock and the narrow nature of this particular slot put Douglas and I in mind of the angled sea cave which cuts through beneath the island of Dun in St Kilda, except here there was light from above! 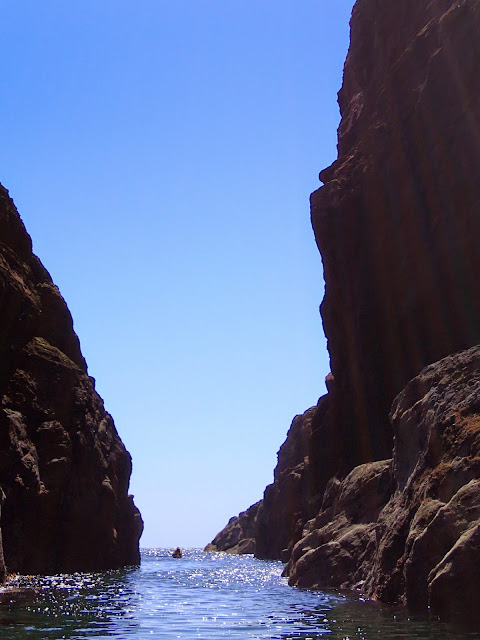 Next comes Dickmont's Den, a geo formed by an enormous cave collapse which will be the eventual fate of Gaylet Pot further north.  It's possible to paddle around a central ridge of rock here, so several of the party did a couple of laps , one each way :o) 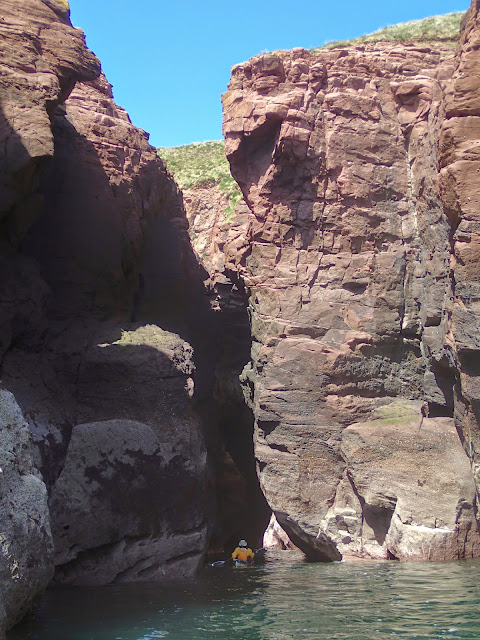 The rock architecture continues almost to the edge of the town of Arbroath itself, ending suddenly as the bay is reached; guarded by shelves of rock which make it a long way from the low tide mark to the seafront promenade near Whiting Ness.  This has its attractions too in the shape of an ice-cream van which we took full advantage of!

Whilst eating our ice creams we heard a call to Aberdeen Coastguard from a yacht which had become entangled on a creel float line.   Douglas and I spoke to the yacht skipper and established that we could see him about  a mile offshore.  We offered to try and help by either passing the rope up or, if we couldn't manage that, to cut it away.  We headed out but were overtaken by the Arbroath Lifeboat on its way to the yacht - the RNLI lifeboatmen are much better trained and equipped for the job than we are, so we were very happy to see how quickly they had responded; only 10 minutes from the original VHF call. 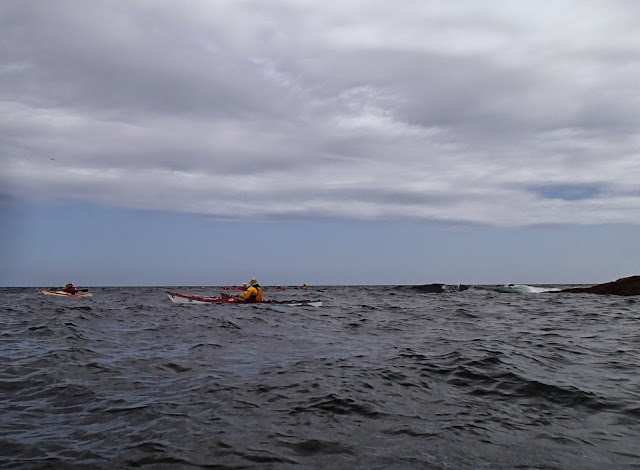 As our group reconvened on the water it was clear that the weather had (as forecast) come up a couple of notches.  A wind swell against the tide was being complicated by clapotis from the cliffs and the combined effect made for a jopply sea and an engaging paddle back up to Auchmithie.  We were certainly glad that we'd fully explored all the great rock architecture on the way south as the narrow channels and caves would have been a very different on the way back!

We rounded our day off having fun with some balance exercises, rolls and self-rescue practice just outside Auchmithie harbour, the chilly water reminding us that summer is not quite here yet.

Once again the Angus coast had given us a day of superb sea kayaking; and its noticeable that our paddling group grows a little every time we visit - the word is out!

You can follow this trip in "Sea kayaking TriVision" by reading Duncan & Joan's blog here and here and Douglas' blog here
Posted by Ian Johnston at 20:04