Breaking in and breaking out at Morar

Mike, Douglas and I had planned to stay two nights at the Glenuig Inn in addition to a wild camp during our Glenfinnan - Inverailort journey.  This gave us the opportunity to do a day trip from Morar to Arisaig, returning the same way.  You can follow this day's paddle in "Sea Kayak Stereovision" by reading Douglas' blog starting here 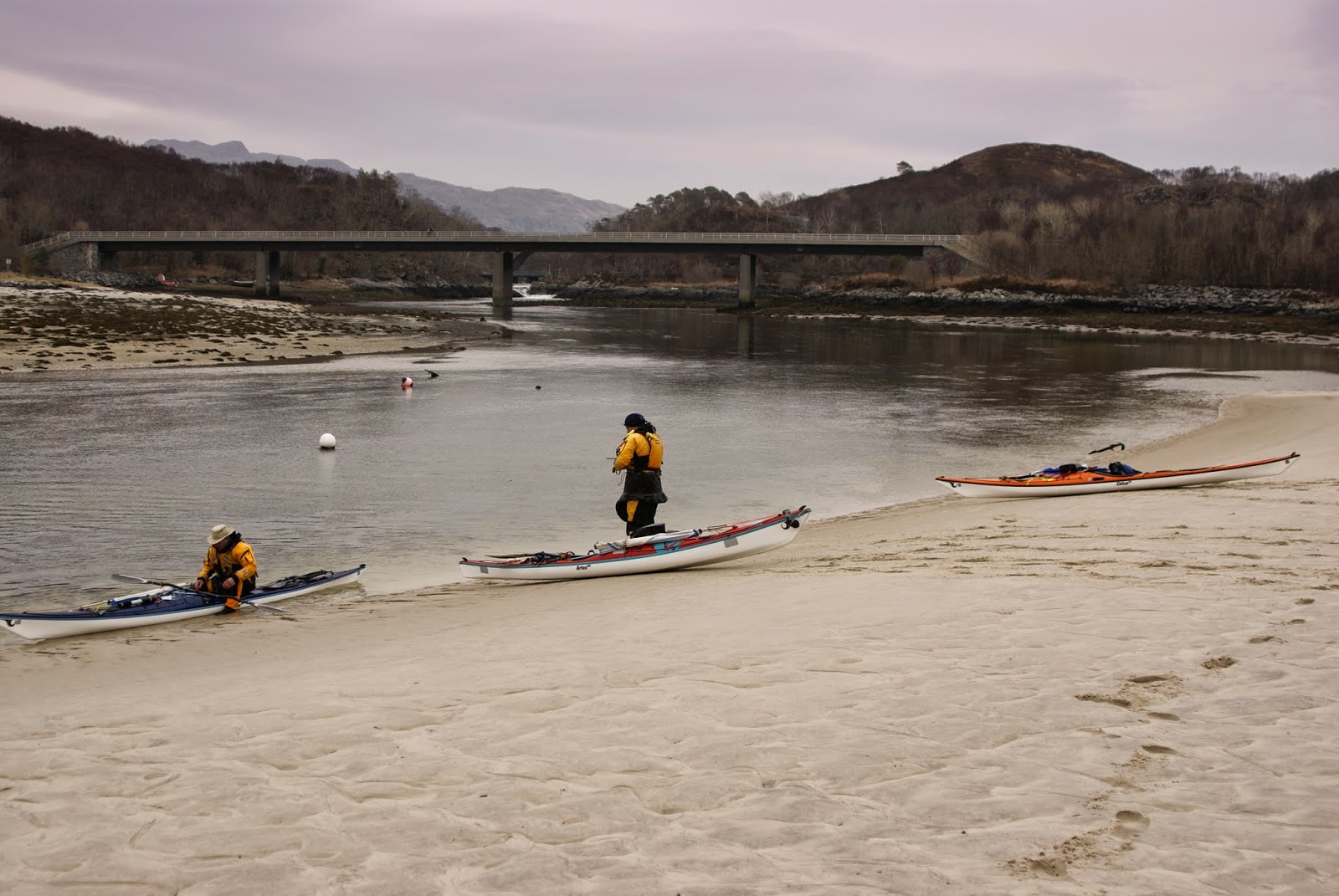 We drove from Glenuig to Morar and parked in a layby just to the east of Toigal (a hundred metres or so downhill from the car park marked on the OS map) where there's good access to launch onto the tidal part of the River Morar.  Beyond the bridge which carries the A830  road to Mallaig we could see the waterfall where the the fresh water from Loch Morar pours down to meet the salt water. 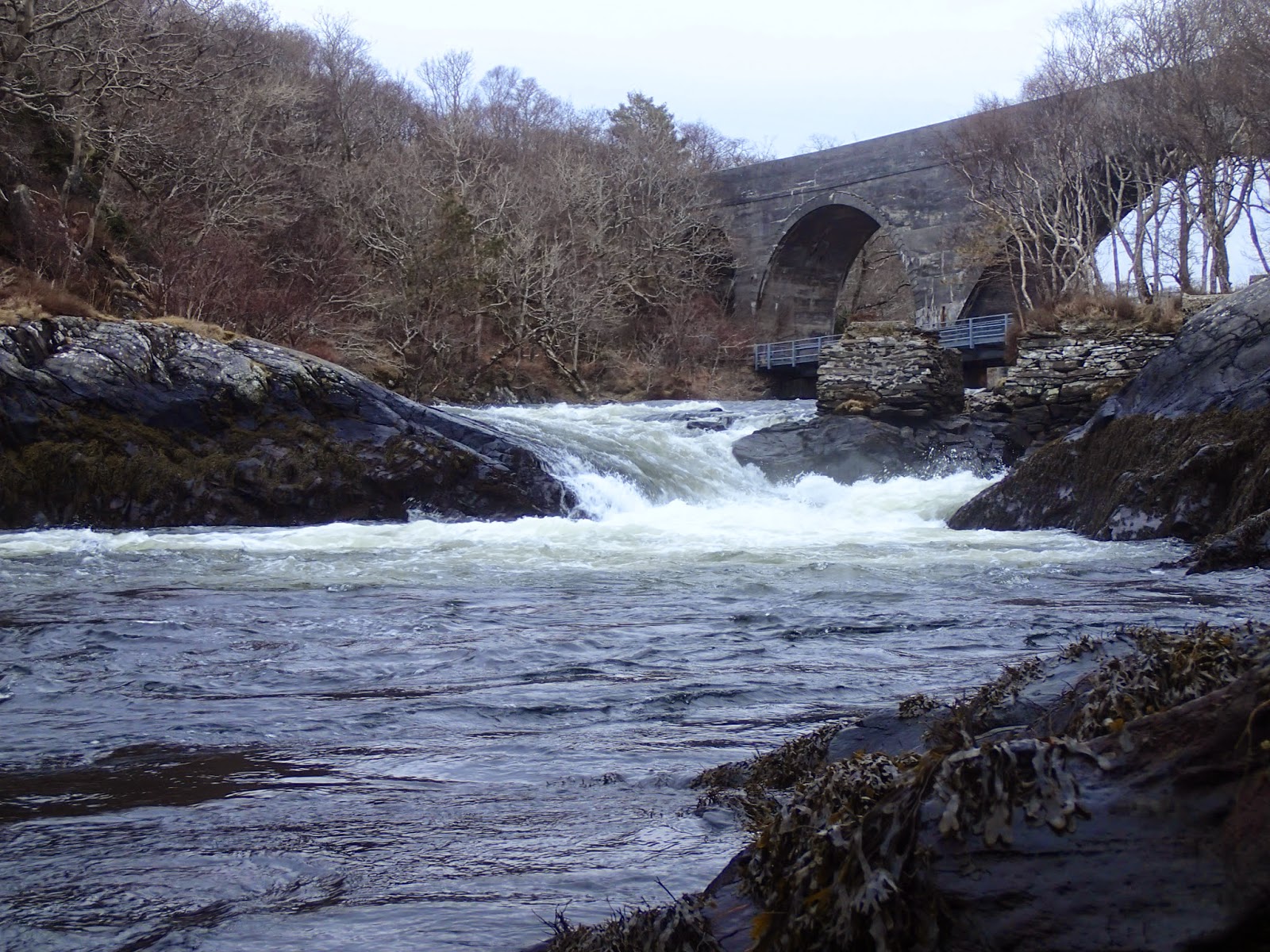 Using eddies and small channels we were able to make our way up against the flow, passing under the new road bridge to where a smaller road bridge and the railway viaduct squeeze together over the rocky channel down which the water was roaring.  As we were launching near low water a day after Springs, the drop was at its most pronounced.  Like the final waterfall from the River Shiel to the sea, this drop is the result of the continuing rise of the land here following the release of glacial ice (isostatic rebound).

The power of the water passing down the 5.5 metre difference in height between the freshwater Loch Morar and the sea has been utilised just above the Falls of Morar by a 750KW hydroelectric power station which was installed in 1948.  The fresh water section of the River Morar is a contender for the shortest river in Scotland, and it drains the deepest freshwater loch in the country, so the potential is for a hydro-scheme is very clear.

We wondered whether it would be possible to inspect the fall a little more closely...... 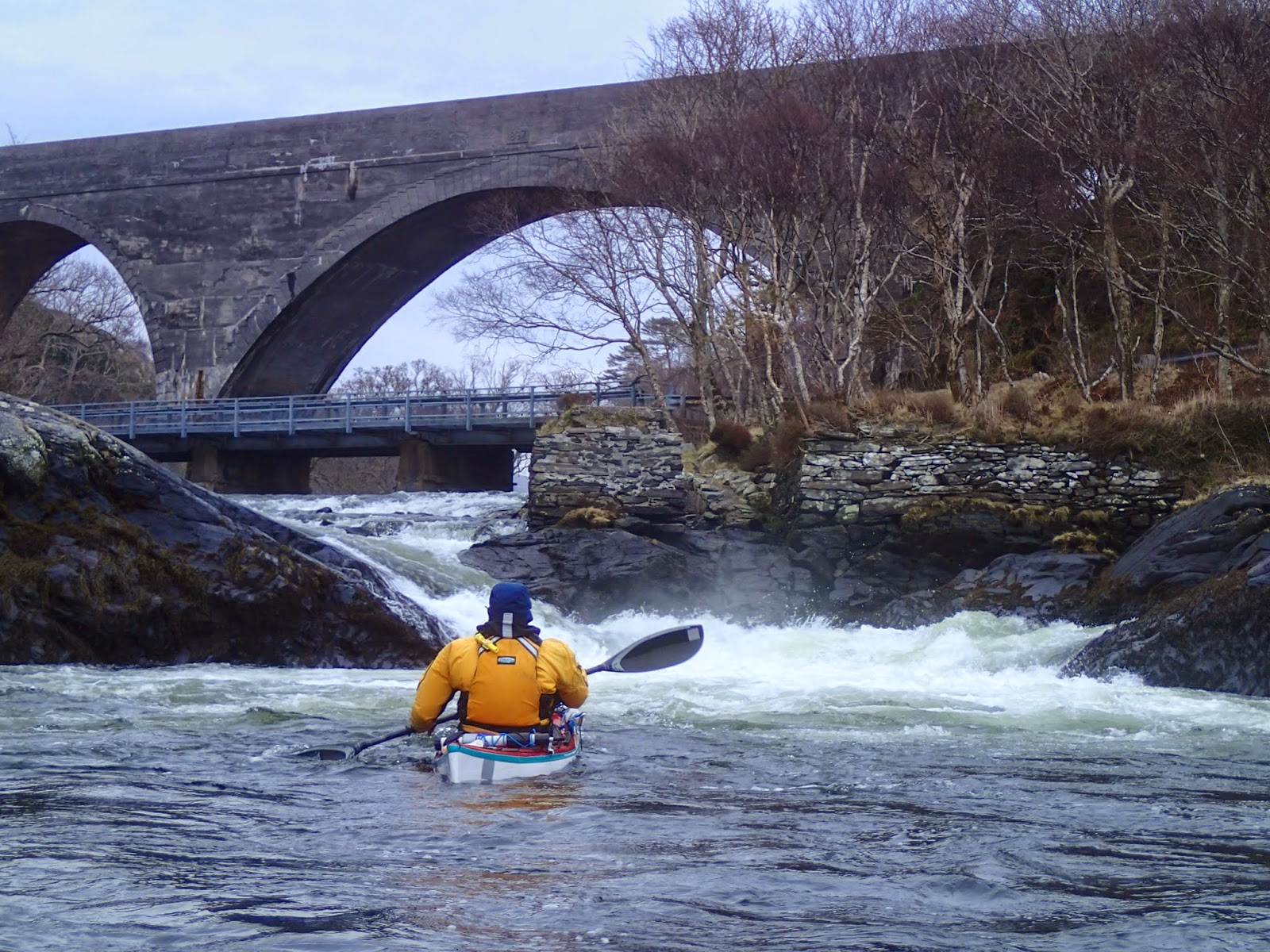 Breaking into the flow required a fair bit of energetic paddling, but as is sometimes the case we found that once at the base of the fall itself we could maintain station quite easily.  On the bank we noticed two drystone footings; these may have either caried an earlier bridge or possibly the footings of a mill. 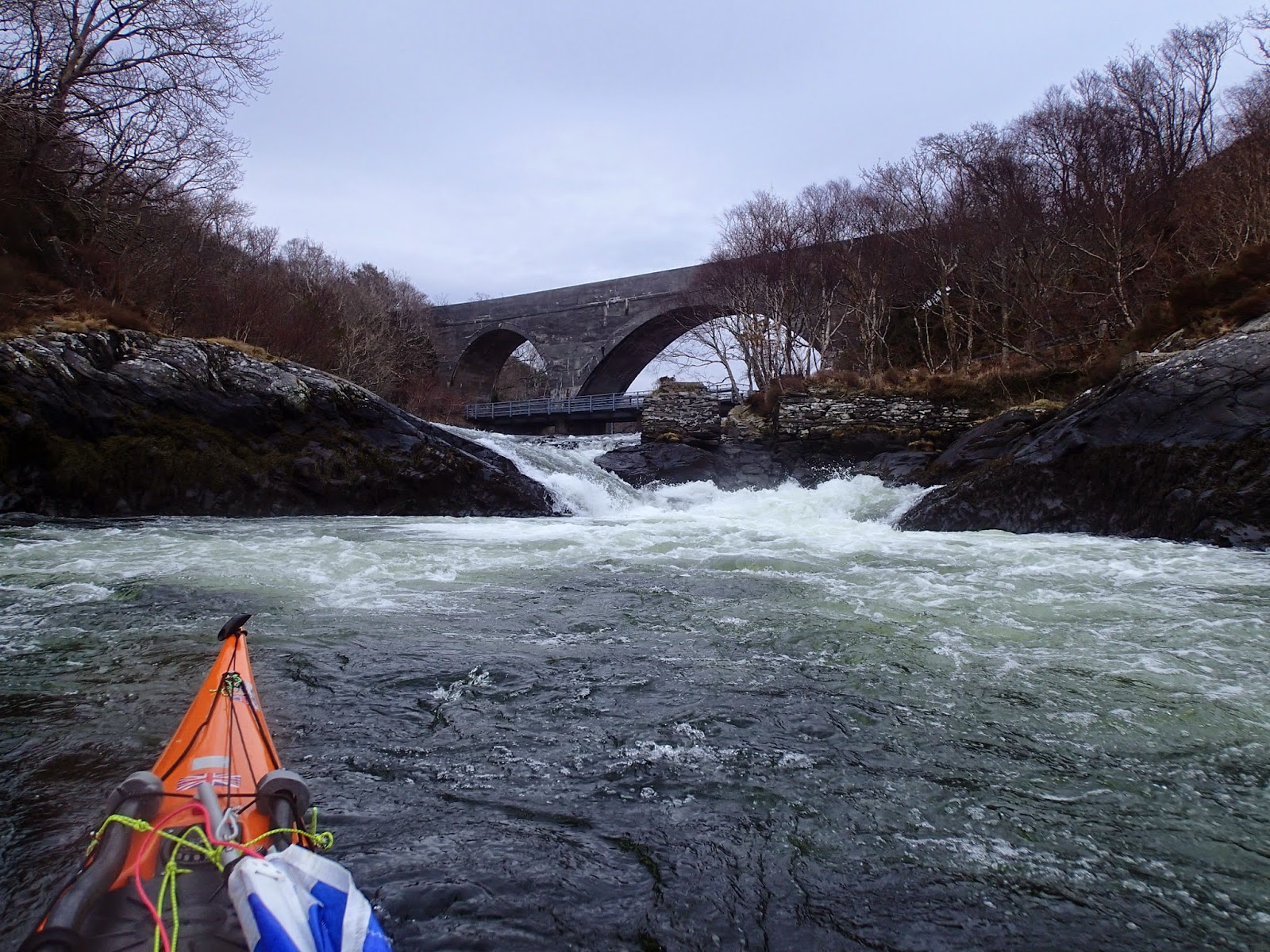 At this range the noise of the fall is quite impressive! After having some fun in all this aerated and moving water we let the flow take us back down into the quietly moving water in the Morar estuary. 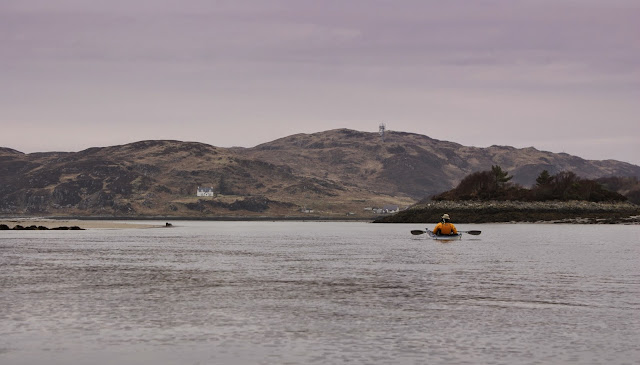 At first we could hear mostly man-made noises; cars on the A830 road and a train crossing the viaduct, but as Mike pointed out, the further we travelled downstream the more the man-made sounds faded to be replaced by more natural sounds....... 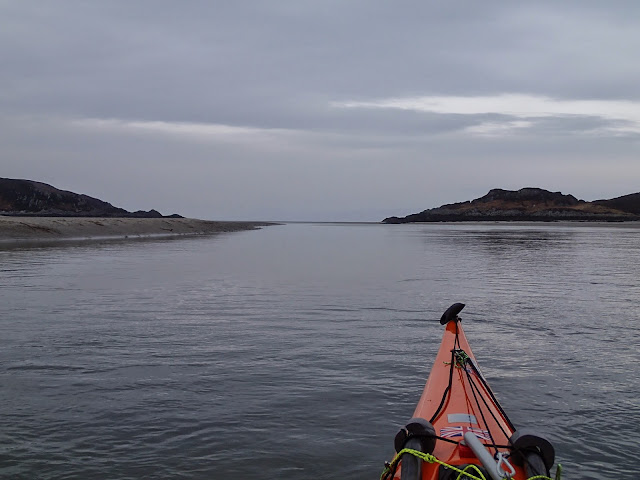 ...until the calls of birds - Curlews, Oystercatchers, Redshanks and the rest - became the only sounds.  It felt that we had broken out from "civilisation" and slipped firmly into the natural world. 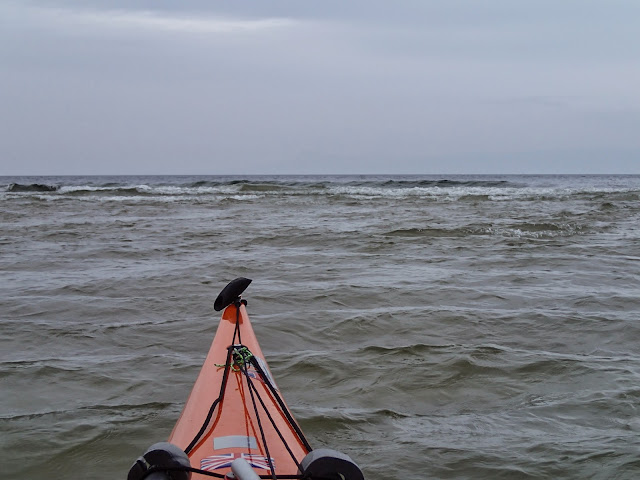 However, we had one more break-out to achieve.  At the mouth of the Morar estuary is a sand bar over which the ebbing tide runs strongly.  When the wind is from a westerly direction impressive standing waves can be formed here as the wind opposes the strengthened flow.  We arrived at the end of the ebb and with a light southwesterly breeze and so........ 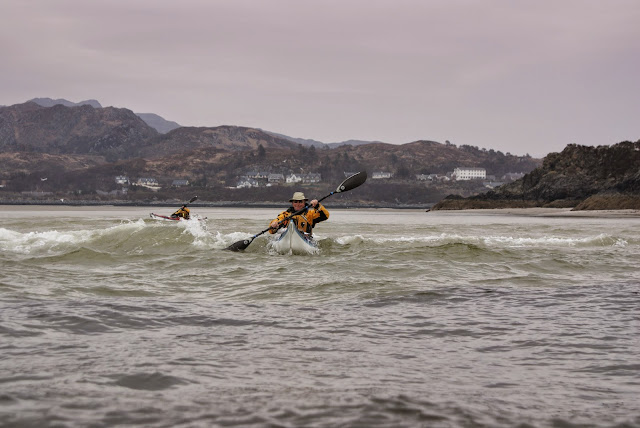 ...our break-out was fun rather than difficult..... 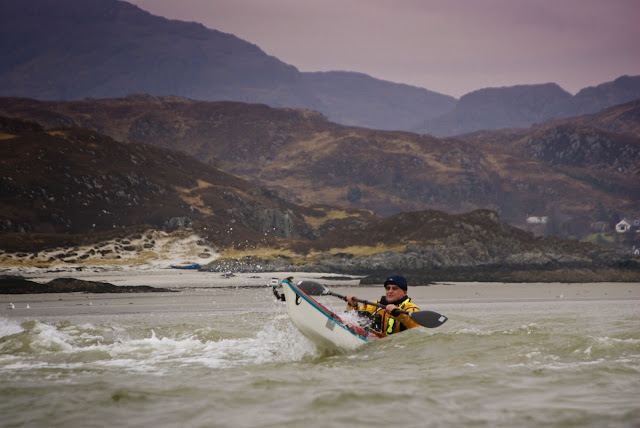 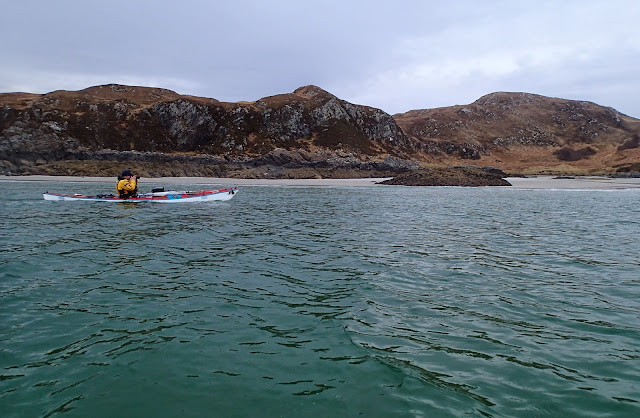 Having broken out from the Morar estuary we turned south to head along a coast famed for the quality of its beaches.
Posted by Ian Johnston at 08:40