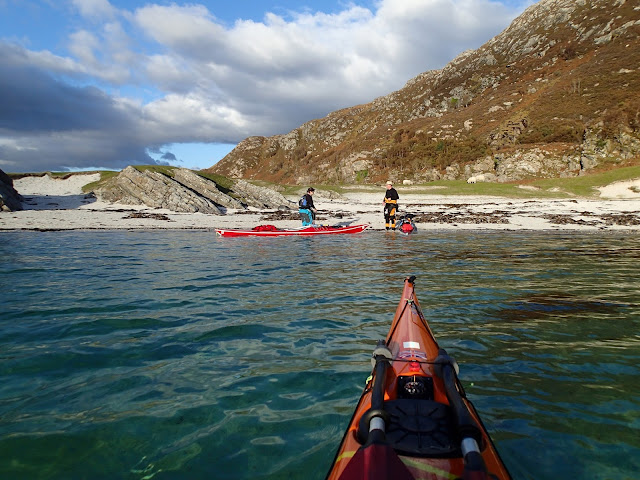 We pulled our boats a little way above the high water mark and set up our tents - there's enough space to spread out here if required and the turf makes excellent ground on which to camp - except in wet conditions when the sand below the grass seems to stick to everything. 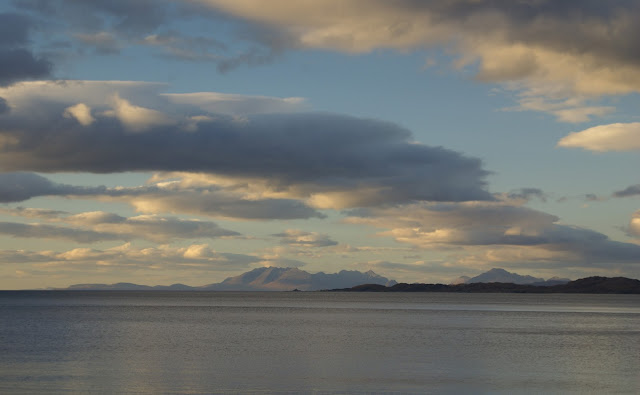 Having pitched our tents and carried sleeping bags and mattresses up from the boats we paused to take in the view - and what a view it is.  The Small Isles - Eigg, Rum and Muck (Canna isn't visible from here, being hidden behind Rum) lie to the west, while up to the north there was this glorious view of Skye beneath an arcing cloudscape.

The Cuillin ridge is prominent in the centre, lit by the late sunshine with a warm brown glow.  To the right, across Glen Sligachan are Bla Bheinn and a glimpse of Marsco in full sunshine.  To the left the west coast of Skye stretched away into the distance, rendered sharp in the cooling air.

Having made space in the boats, Douglas and I paddled back to the entrance of the North Channel and made a landing on the rocks to collect firewood.  We managed to collect a couple of bags and cut some sections of branch from a bleached dead tree washed up and wedged into the rocks.  This was the second visit I've made to this tree and what's left will require cutting with something bigger than our folding pruning saws! 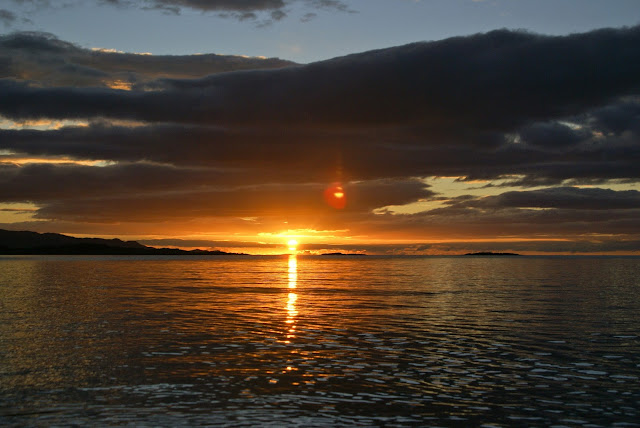 The wind died completely and the sun began to set as Douglas and I made our way back. For a short while it seemed to us that the world held its breath - the only sounds were the occasional calls of shorebirds.  We slowed right down, it felt right to pause and watch rather than disturb the silence by paddling. 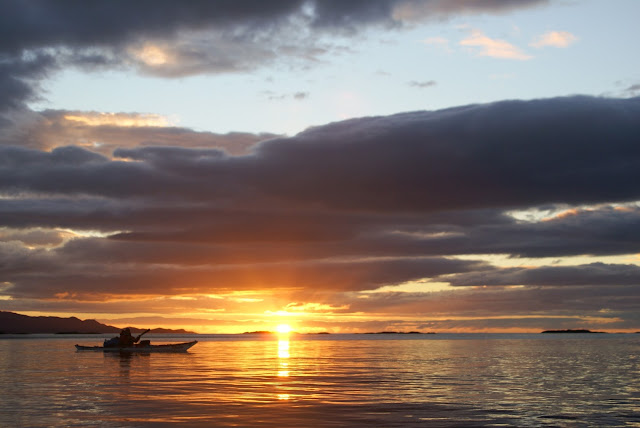 As the sun touched the horizon beyond Ardnamurchan Point a blaze of glorious golden light poured across the still surface of the sea.  Douglas had the vision to turn his camera away from the sunset and captured perfectly this transient and gorgeous light. Rays from the setting sun reached up and fired the base of the clouds.......

.....which began to glow in fiery shades.  We landed on the beach and joined Mike and Lorna who had climbed a little way up the point to get the full widescreen view from Ardnamurchan to Skye and beyond, all backed by the incendiary riot of sunset colour reflecting off the sea.  Lorna summed it up perfectly when she said "Just look around us......right now this is the best view in the world".

We cooked and ate dinner outside the tents, absorbing the view and certainly for my part thinking how incredibly fortunate I am to be able to enjoy experiences such as this.  After diner we gathered on the beach and lit a driftwood fire below the tideline.... 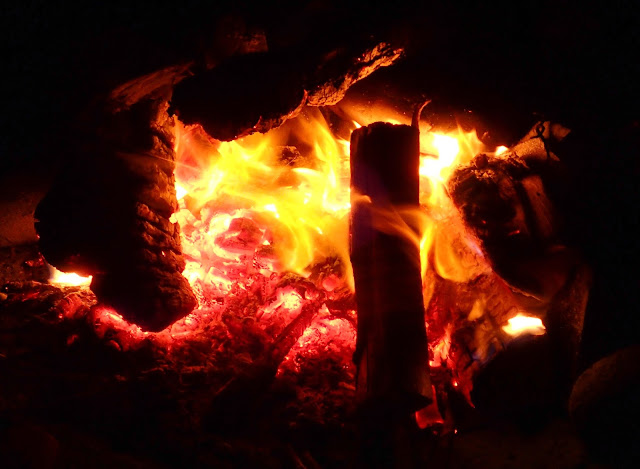 ...which burned bright as the embers of the sunset finally subsided some hour and a half after the sun dipped below the horizon.  The glow of the fire lit our conversation for several hours afterward as we reflected on the trip so far.  The morning would require just a short paddle, but the forecast was not good as the brief spell of settled October weather would be replaced by the strong wind and rain of an Atlantic low pressure system.
Posted by Ian Johnston at 11:26