Glenfinnan to Lochailort by sea kayak is a trip which both Douglas and I have long wanted to do. Looked at on a large scale map it doesn't seem to be much of a trip; after all the two points are little over 15 kilometres apart by road. However, if done by the long and scenic route this would be a 65 kilometre paddle with some potentially committing sections.

Our method for planning and executing multi-day trips is quite simple; plan the outline of the journey, work out the basis of the tidal requirements, potential stopping points, contingency planning etc and then wait for the conditions to be favourable. For some trips the waiting can take quite some time; our journey among the Small Isles for example was planned in outline for almost two years and in detail some eight months before we actually set off as either the conditions or our availability didn't coincide.

A winter dominated by frequent wet and windy spells didn't seem to offer much hope for multi-day trips, particularly one which could be directly affected by very wet weather (the reason this trip is best done in dry weather will become clear in a later blog post!).  Added to this, Douglas had been unwell for the best part of a month and was still recovering.  I considered a solo attempt when a brief weather window looked to be on the horizon, but the forecast gradually deteriorated; besides which this would be a much better trip if shared with friends.

And then on 15th March the forecast for the following week indicated a spell of light winds as a result of a nearby high pressure system.  The proximity of  high pressure to the run of Atlantic low pressure systems can provide fine weather but even slight movement of either influence can change conditions quickly.  It wouldn't be wall-to-wall sunshine but the wind would be light and there was no significant rainfall in the forecast.

As the basic planning of the trip was already done, it required just two text messages and a couple of phone calls to make the final arrangements - on 17th March, Mike, Douglas and I convened at Glenfinnan a little after lunchtime.  Douglas had phoned ahead to see whether we could park a car at the Glenfiinnan House Hotel; we offered to either pay to park or to have a meal at the hotel prior to setting out. The hotel wasn't yet open for visitors, however the manager kindly allowed us not only to park a car but to launch from the hotel grounds.  This was a kind gesture and very much appreciated - in summer with both hotel and loch busy with visitors we probably wouldn't have approached the hotel but parked at the car-park just off the A830 used by people visiting the Glenfinnan viaduct (overnight parking at the NTS car park is not permitted).

This trip can be be viewed in "Sea Kayak Stereovision" by also following it on Douglas' blog starting here...... 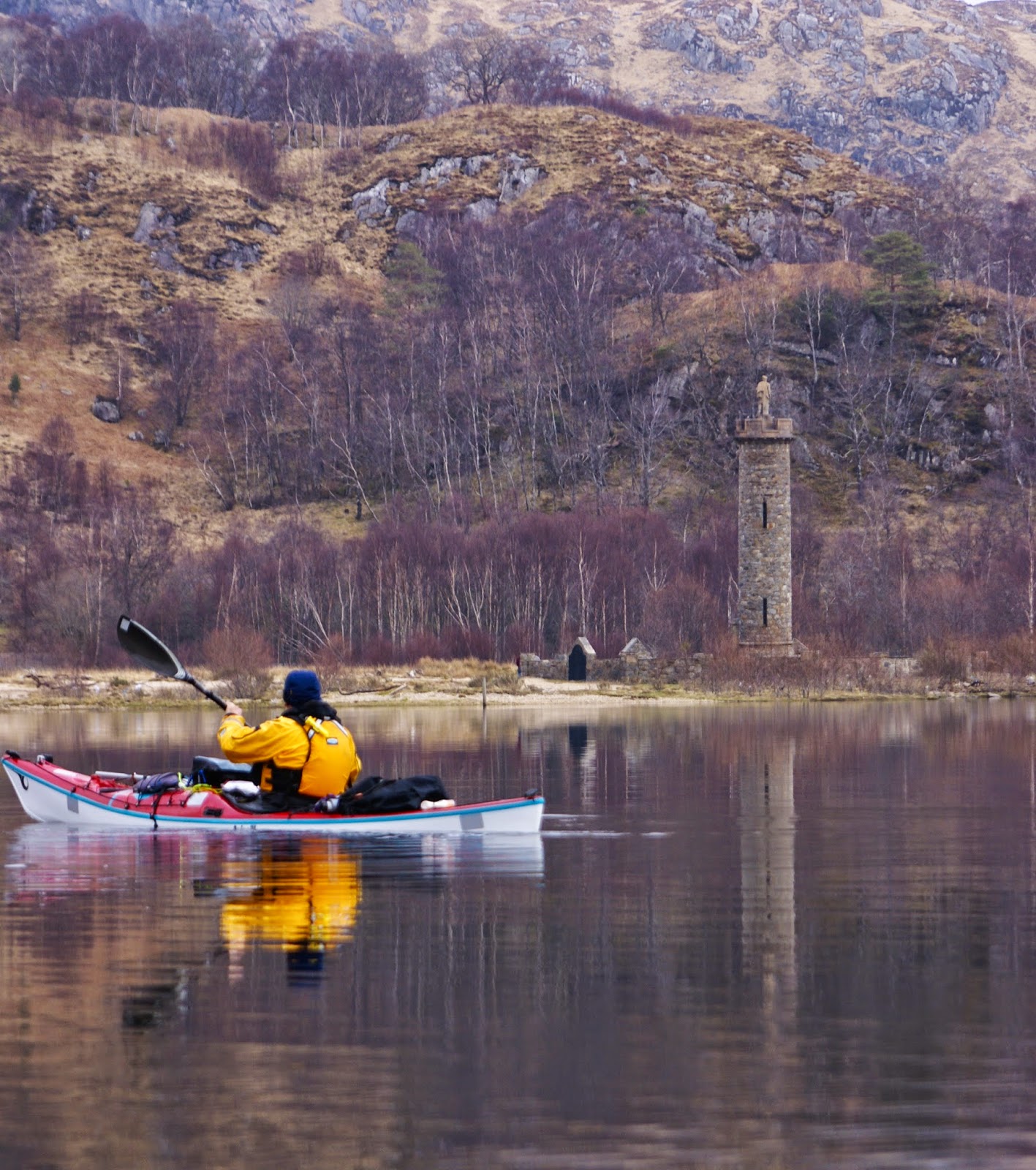 While Mike and I ran the shuttle to get a car to our planned destination for two days ahead, Douglas moved the boats on their trolleys to the waters edge.  By 1440 we were on the water to start another trip - a fresh start because we set out onto the freshwater Loch Shiel.  We couldn't head down the loch without first paddling the short distance to see the Glenfinnan Monument. 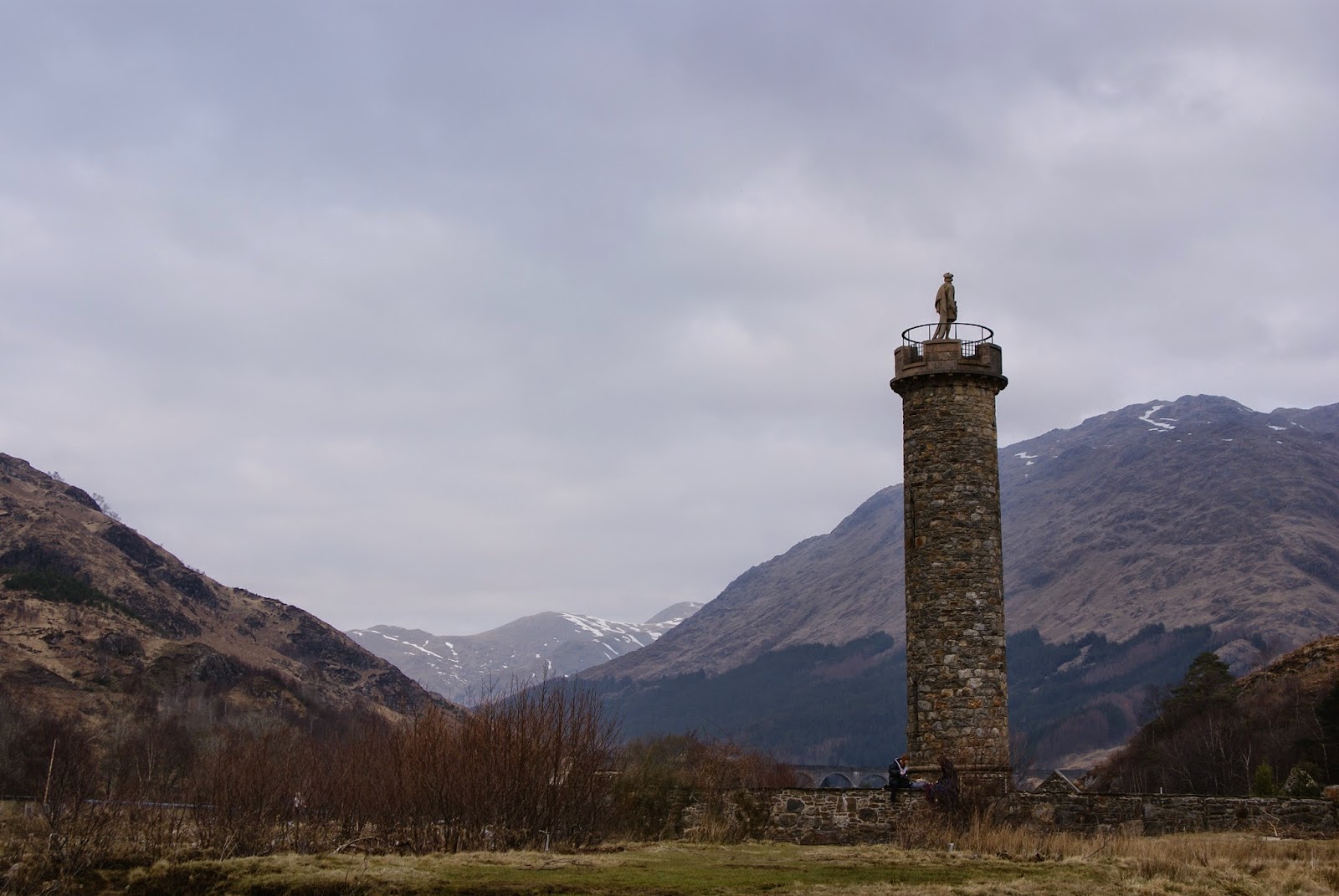 On 19th August 1745 Charles Edward Stuart was rowed to the head of Loch Shiel where arrangements had been made for a gathering of clans sympathetic to the Stuart (Jacobite) cause.  He was eventually joined by about 1500 men, mainly from the clans MacDonald, Cameron and MacDonnel who formed the basis of an army with which the Stuart Prince hoped to win back the crowns of both Scotland and England from the Hanoverian King George for his father James, who was in exile in France.

The story of the 1745 rebellion is one of impulse, drama, mismanagement and ultimately disaster.  A very useful resource can be found here. Initially the campaign was successful, reaching Derby after a couple of victories over Government forces en route.  With the Hanoverian court already packing to flee and Government forces in disarray, factional issues and lack of clear leadership within the Jacobite army caused the rebellion to falter and withdraw.  There followed a period of retreat ending in a final calamity on Culloden Moor near Inverness in April of 1746.  Charles Edward Stuart passed Glenfinnan again in 146, this time as a fugitive hunted by Redcoat troops.  The loyalty of his followers eventually ensured that he was taken off from Loch Nan Uamh in a French warship on 20th September 1746, the same loch from which he'd disembarked a little over a year earlier.  The price paid by the Jacobites and by the highland people in general in the wake of the rebellion was devastating.  A period of brutal repression and the sweeping away of the clan system paved the way for the empty highlands of today.

In 1815 with Britain on a high after the defeat of Napolean, tensions had receded sufficiently to enable the erection of a monument to commemorate the 1745 rebellion.  Paid for by Alexander MacDonald of Glenaladale, descendant of a wealthy Jacobite family, the figure atop the slender stone tower is not of Charles Edward Stuart but of a kilted highlander in fine dress.  The simplicity of the monument set among  mountain and loch scenery is quite striking. 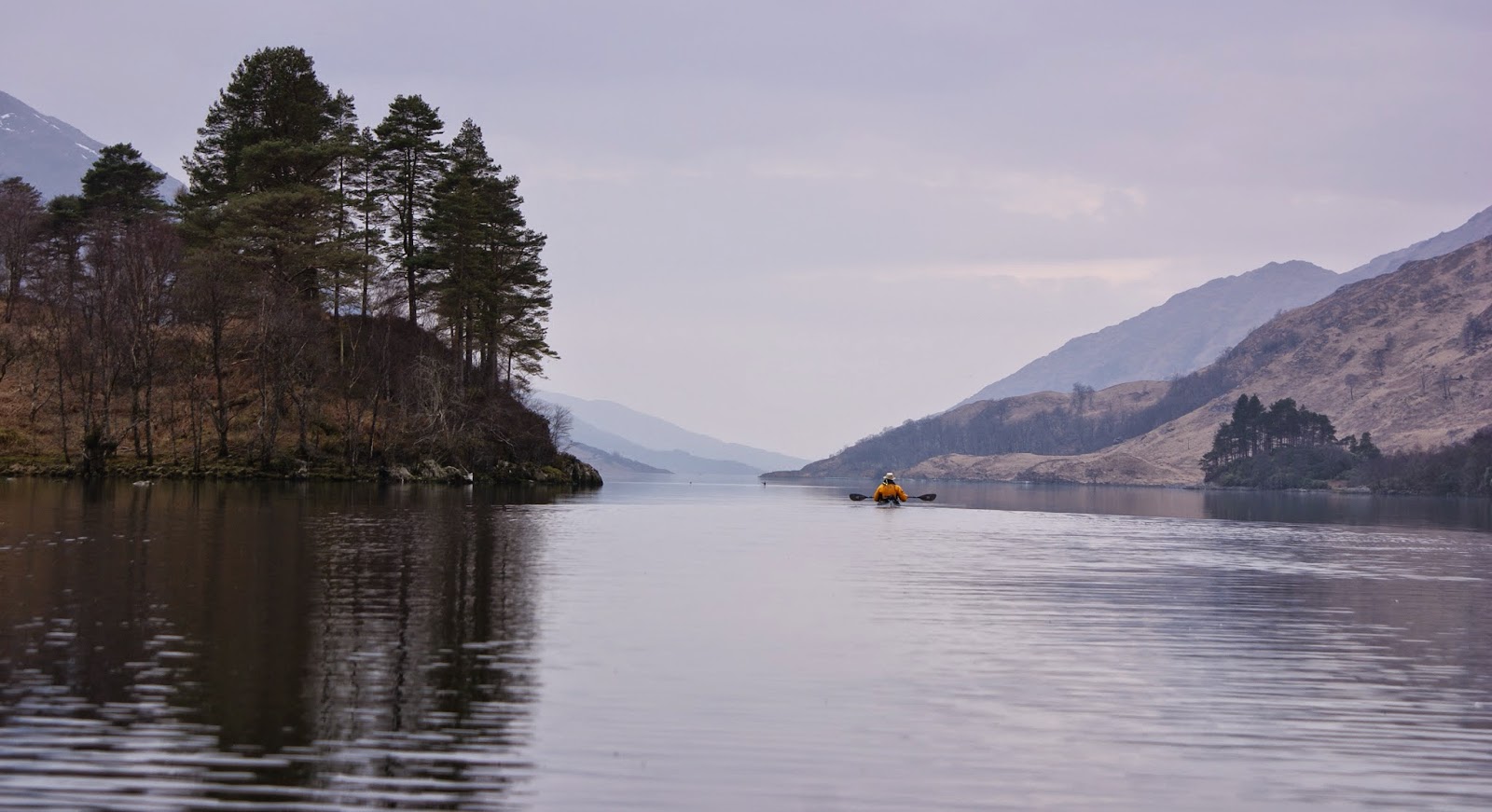 From the historical, we turned our boats to head to the immediate future - a very calm Loch Shiel........ 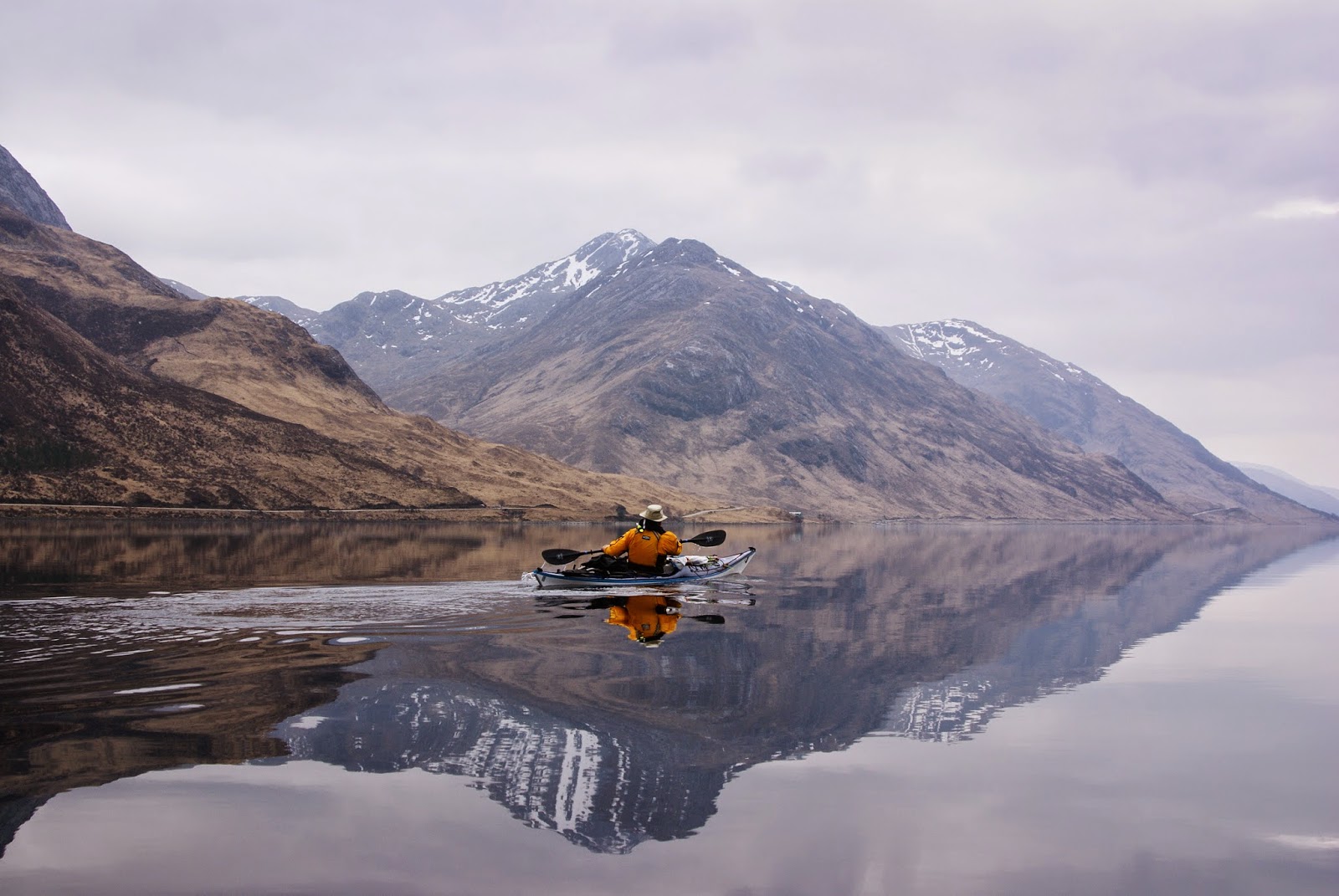 ...so glassy calm that it seemed a shame to disturb the surface with our paddling! 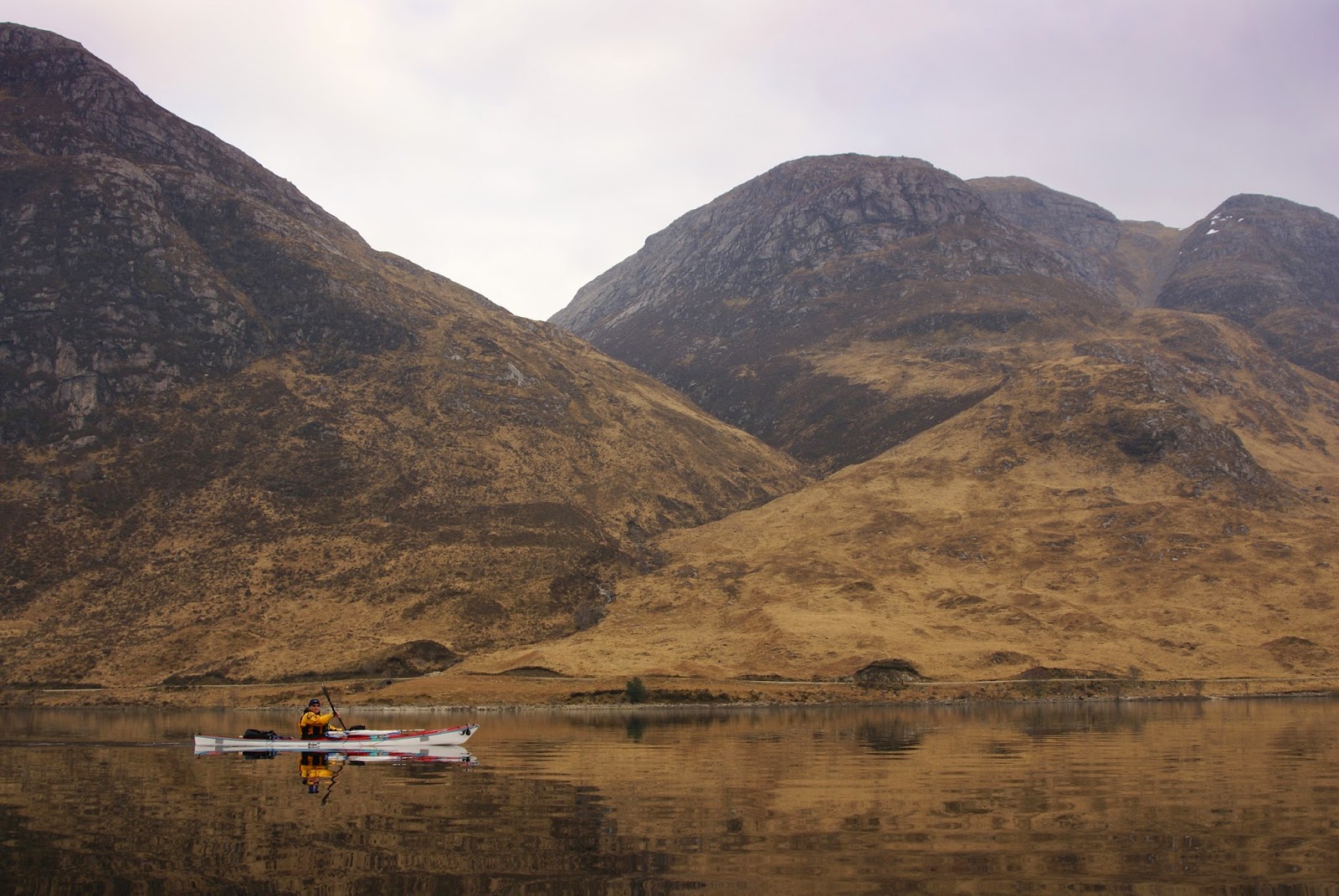 The overcast conditions and late winter colouring of the mountains gave some wonderful effects..... 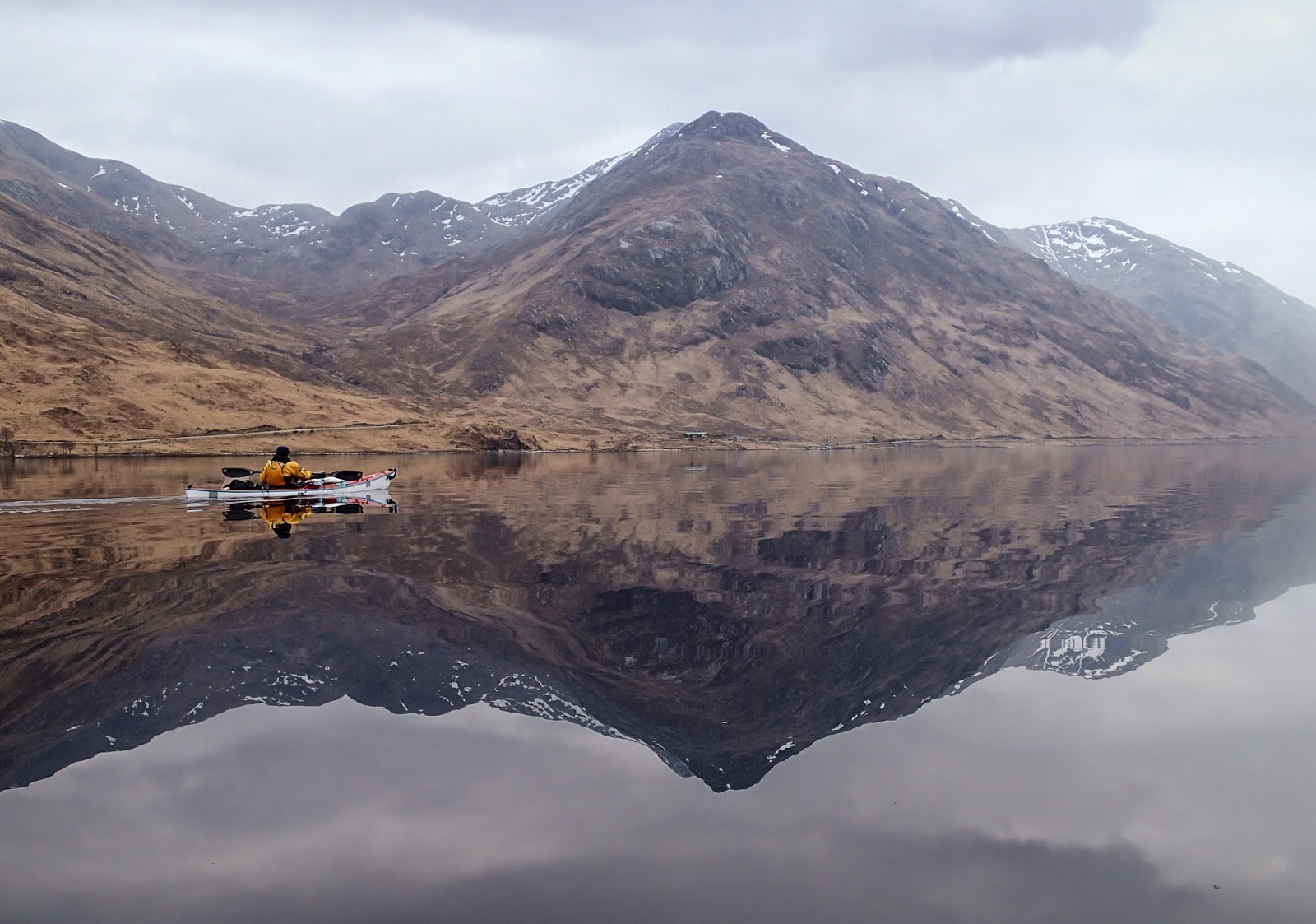 ....mountains were reflected in perfect symmetry onto the surface of the loch..... 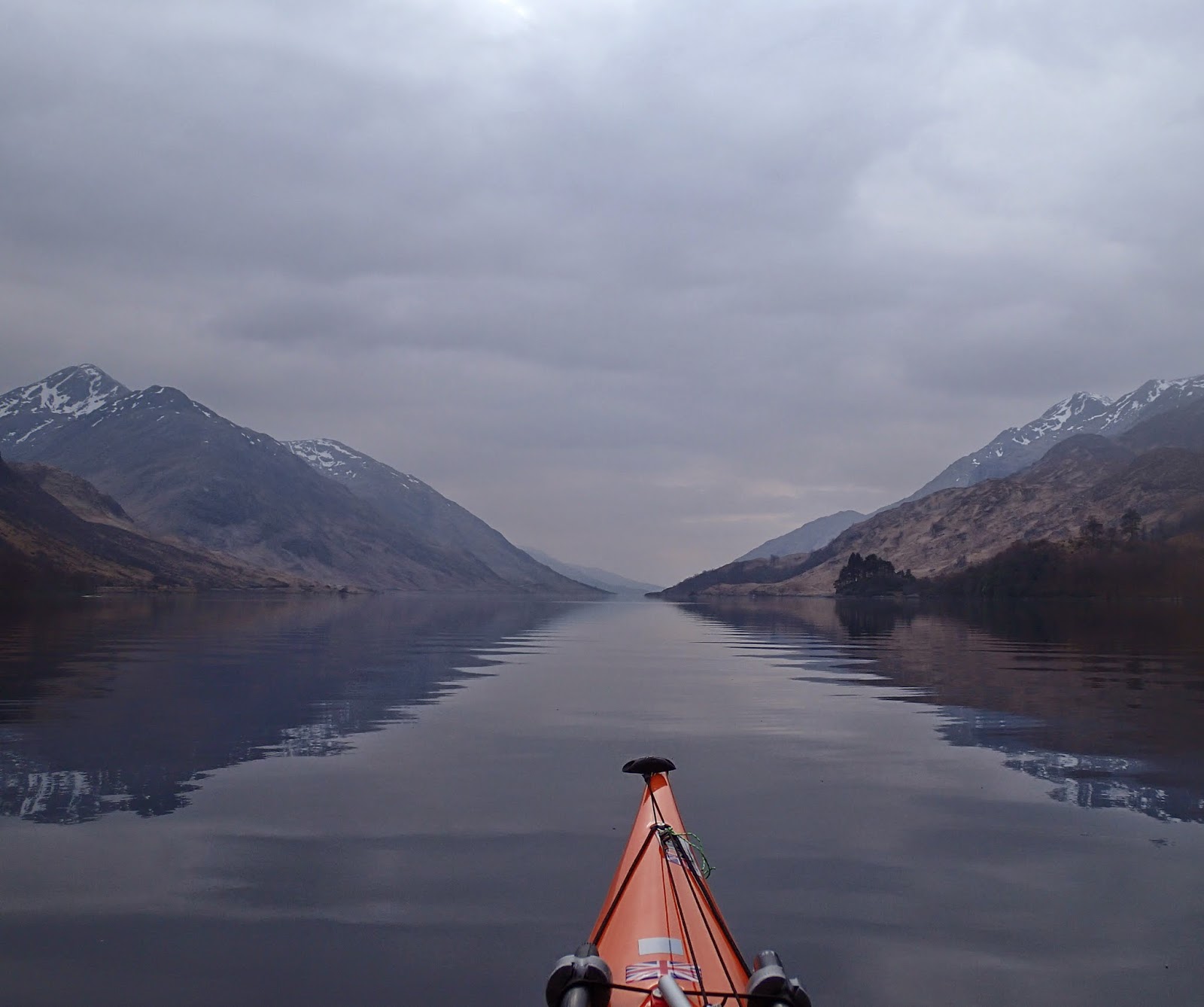 ....while ahead of us the ranks of hills framed the loch to the far distance, drawing us on to a fresh adventure
Posted by Ian Johnston at 11:14