Photographers talk of the "golden hour", a period in the early morning when the light quality is at its best. Certainly the light quality had changed from the previous afternoon; in place of overcast skies and subdued colour there was brilliant morning sunshine and a wash of warm tones despite the early season. 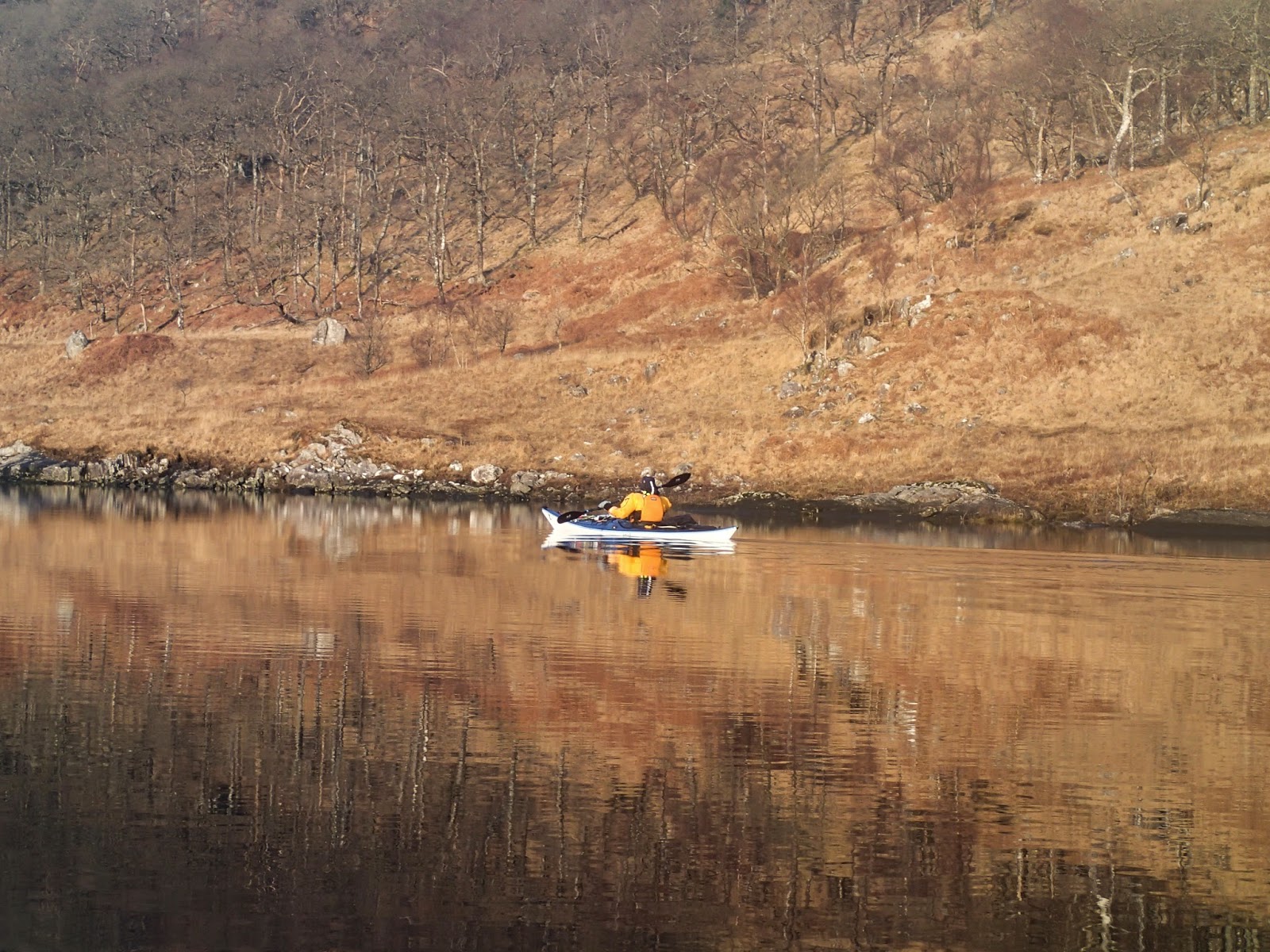 Something which hadn't changed was the lack of wind and the great reflections on the surface of the loch.  We made our way steadily along the shore just enjoying being out on such a lovely morning.  However, as we cleared a small outcrop at Gaskan Wood......... 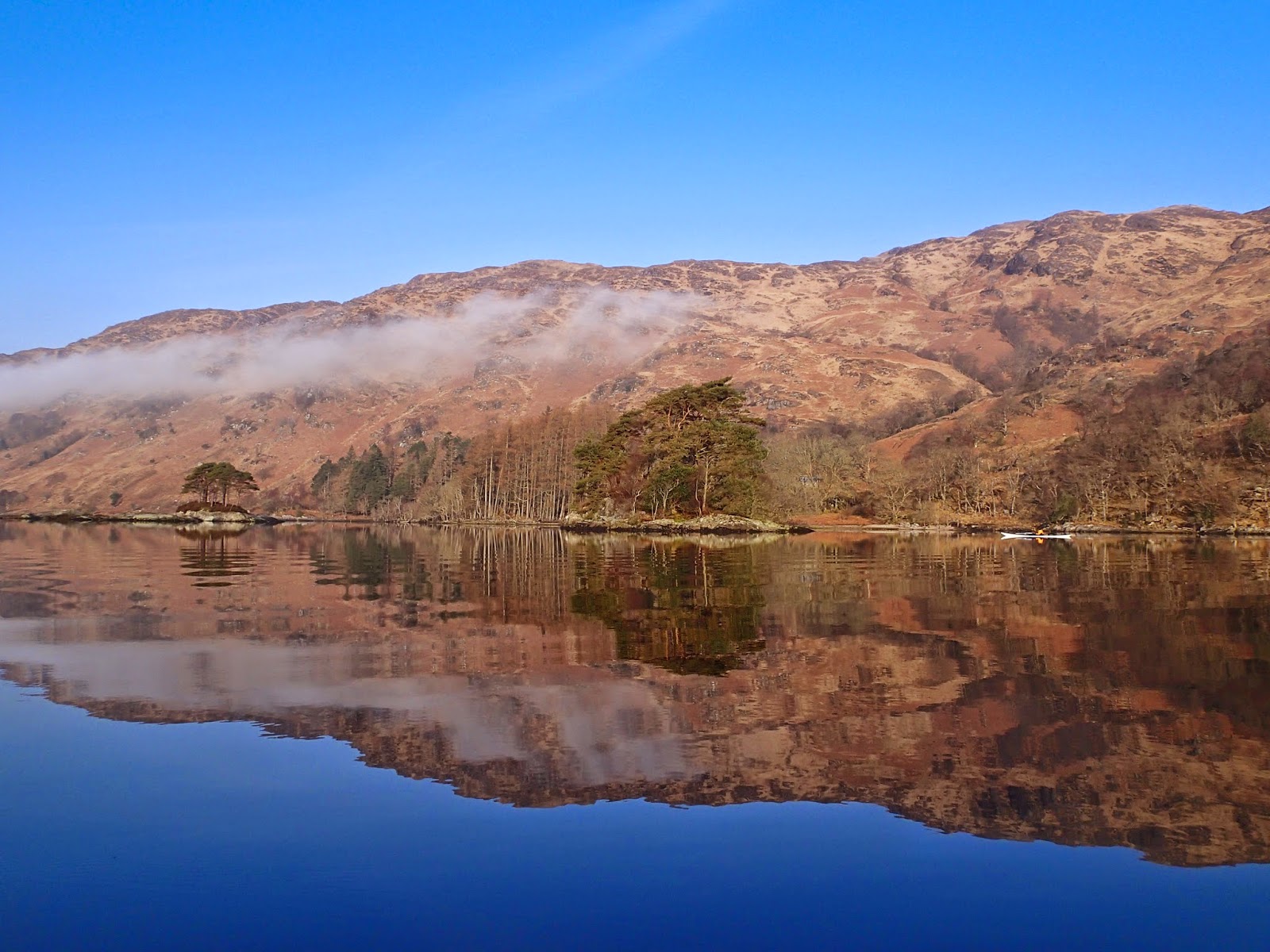 .....the view went from simply lovely to absolutely jaw dropping.  Ahead were the small collection of glaciated rock islands called Eilanan Comhlach (possibly Islands of the meeting).  Set against the russet and blonde tones of the hillside and under a sky of intense blue, the islands seem to float on the loch.  The shred of mist clinging to the hillside just completed a scene which might have come from a "Visit Scotland" brochure.  The whole was simply gorgeous.

I had paddled out a little way into the loch to get the image above while Mike had drifted slowly towards the largest of the islands.  Douglas had landed briefly to demist his camera as this scenery was too good to miss photographing  - I think he did a pretty good job! 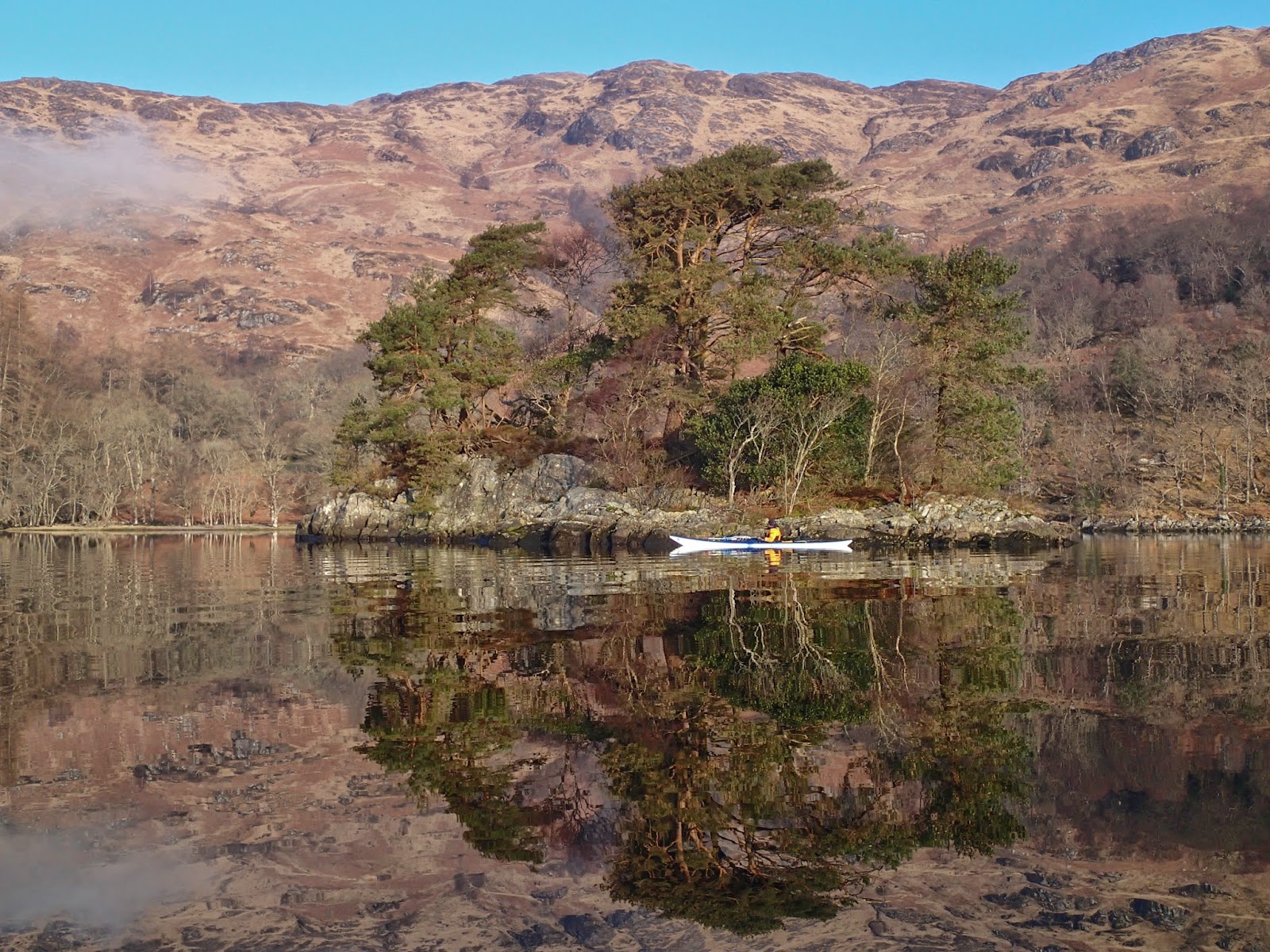 We paddled slowly around the larger island, admiring the reflections of the Scots Pine and Holly on the still water...... 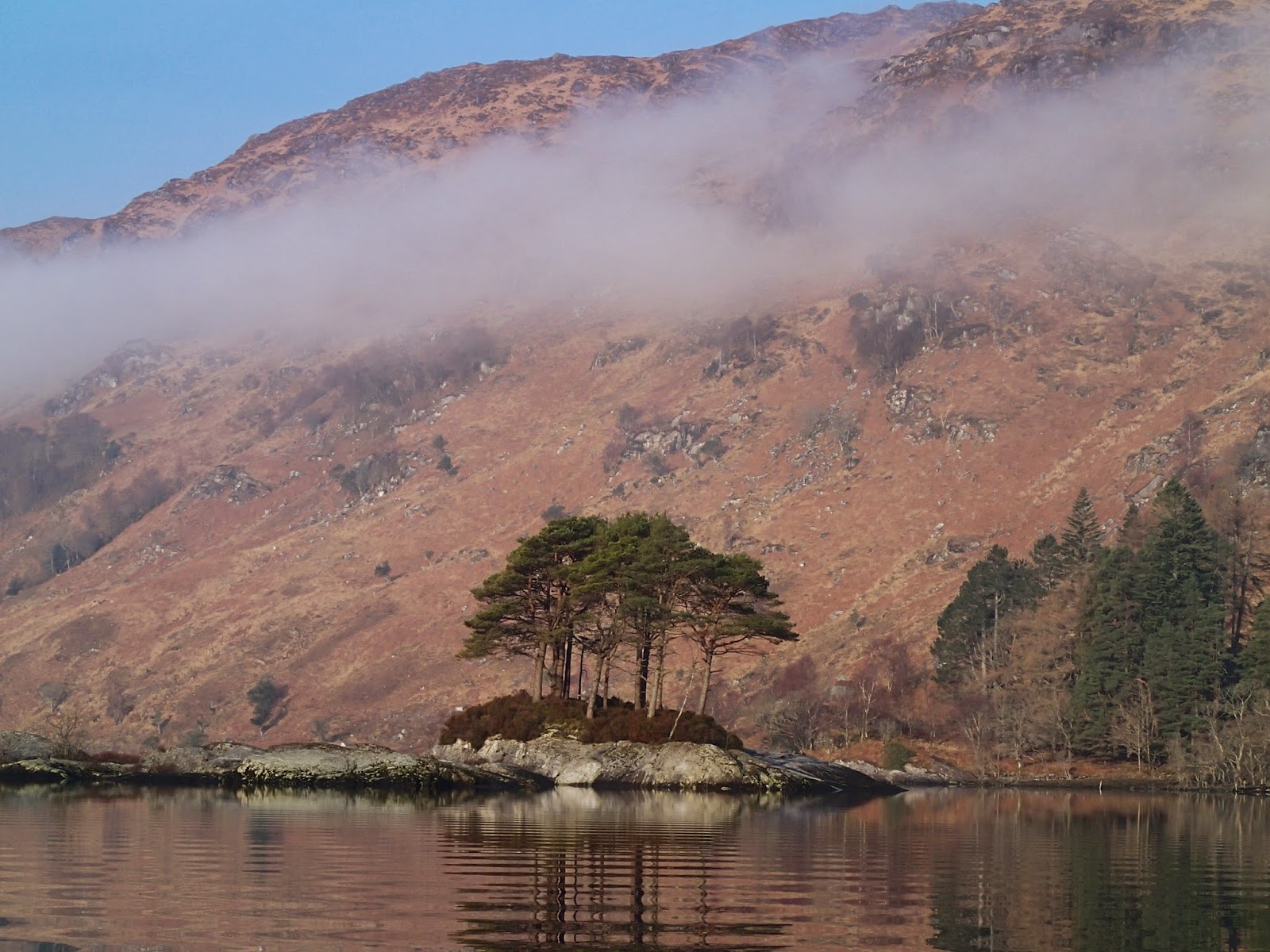 .....and then headed for the collection of rocks forming the smaller island.  I did wonder how the group of Scots Pines here had managed to get any kind of foothold on the island which is a bare rock with the thinnest skin of peaty soil and heather. 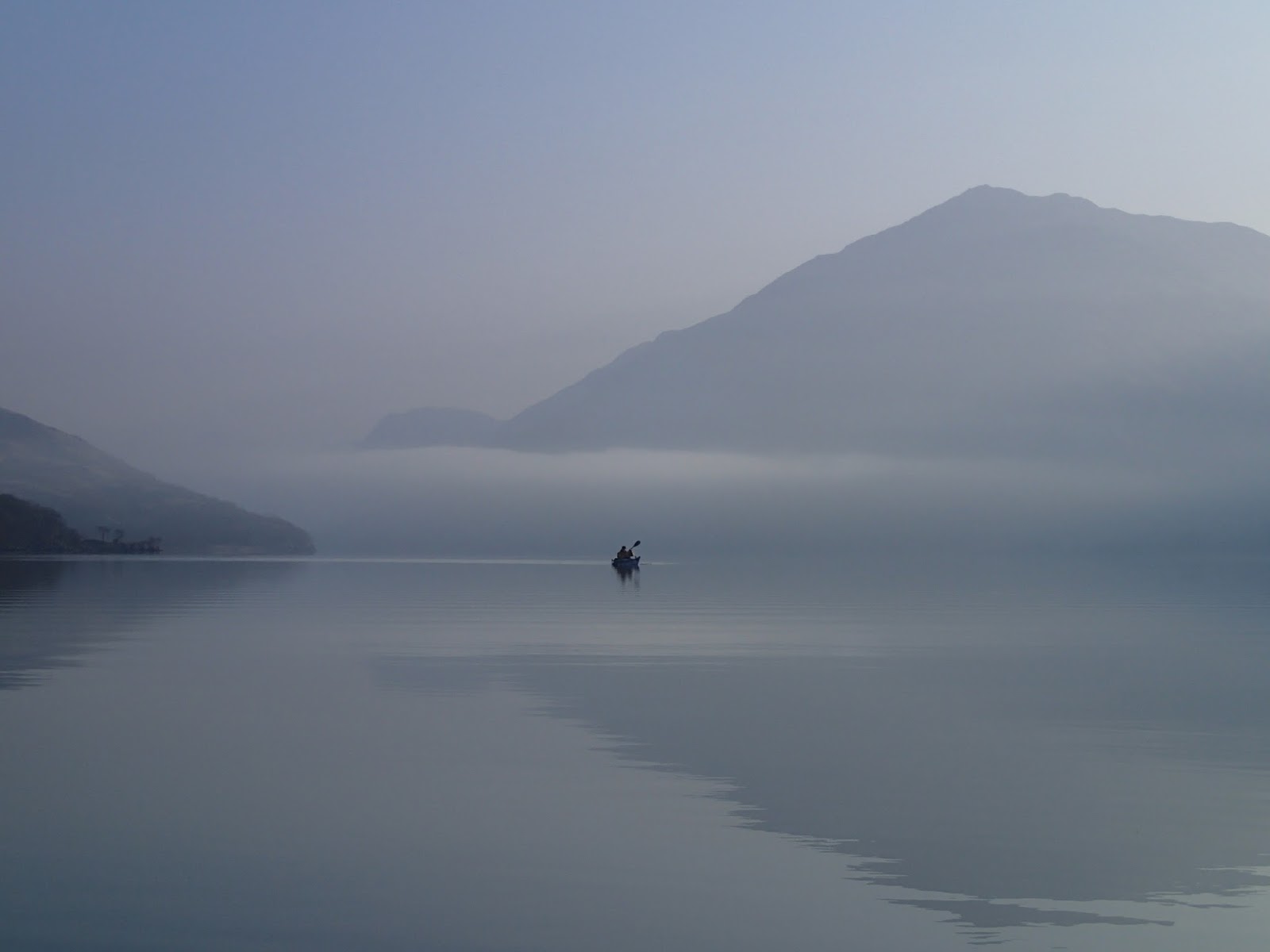 Douglas was back on the water and his approaching kayak added a sense of perspective to the view back up the loch. Surrounded by bigger hills, that part of the loch was yet to receive the morning sun and was still shrouded in a cold but atmospheric mist. 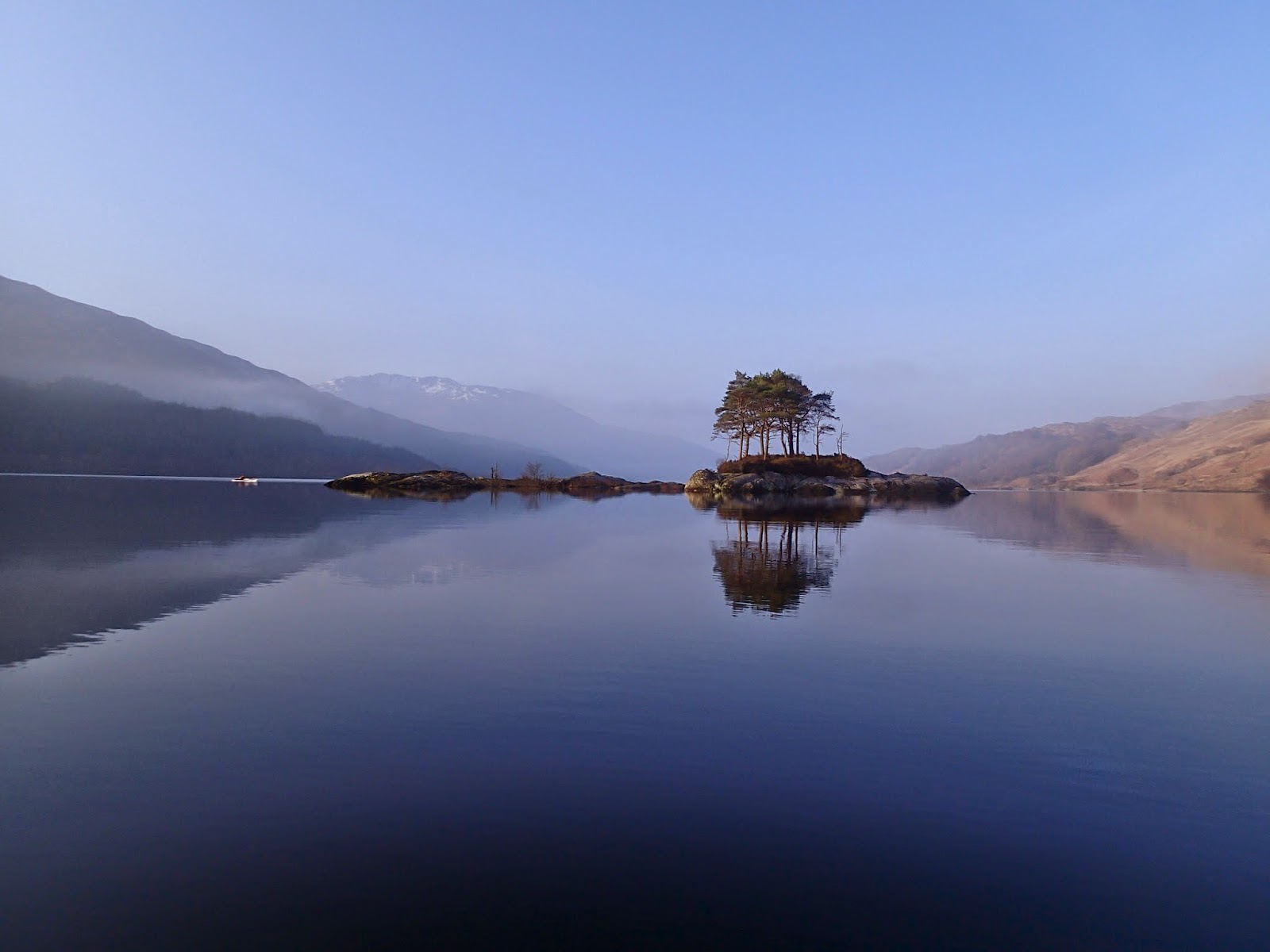 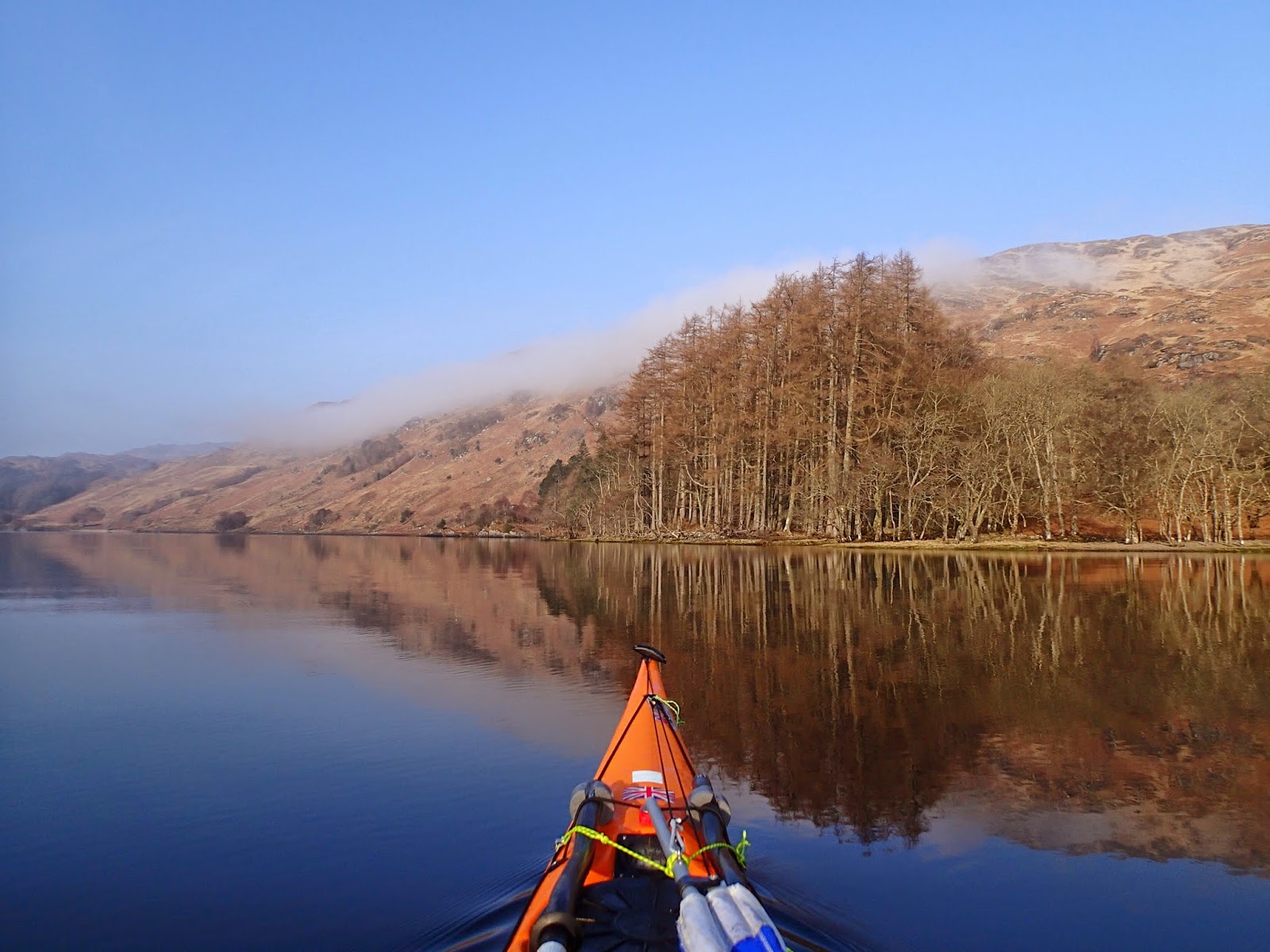 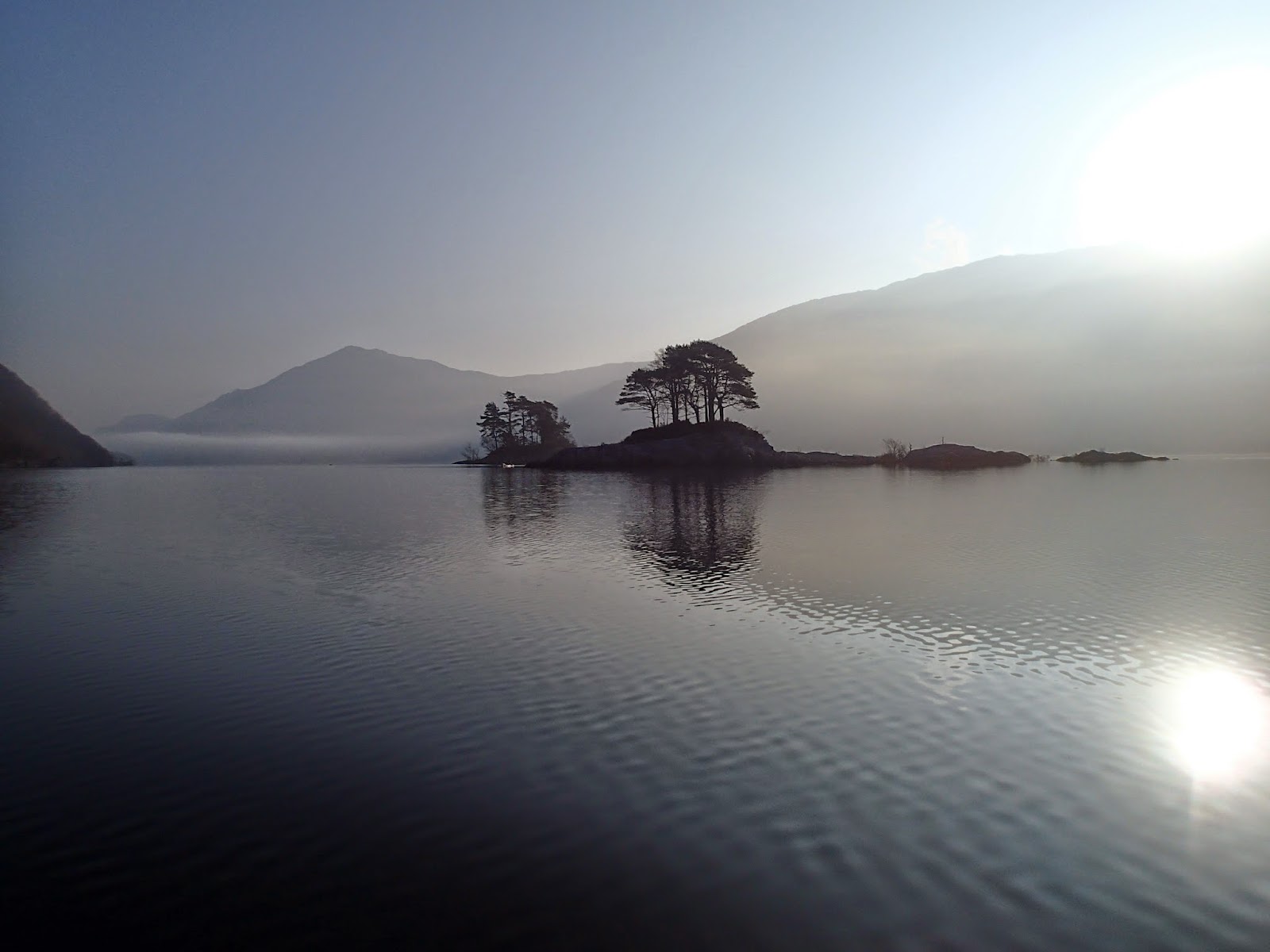 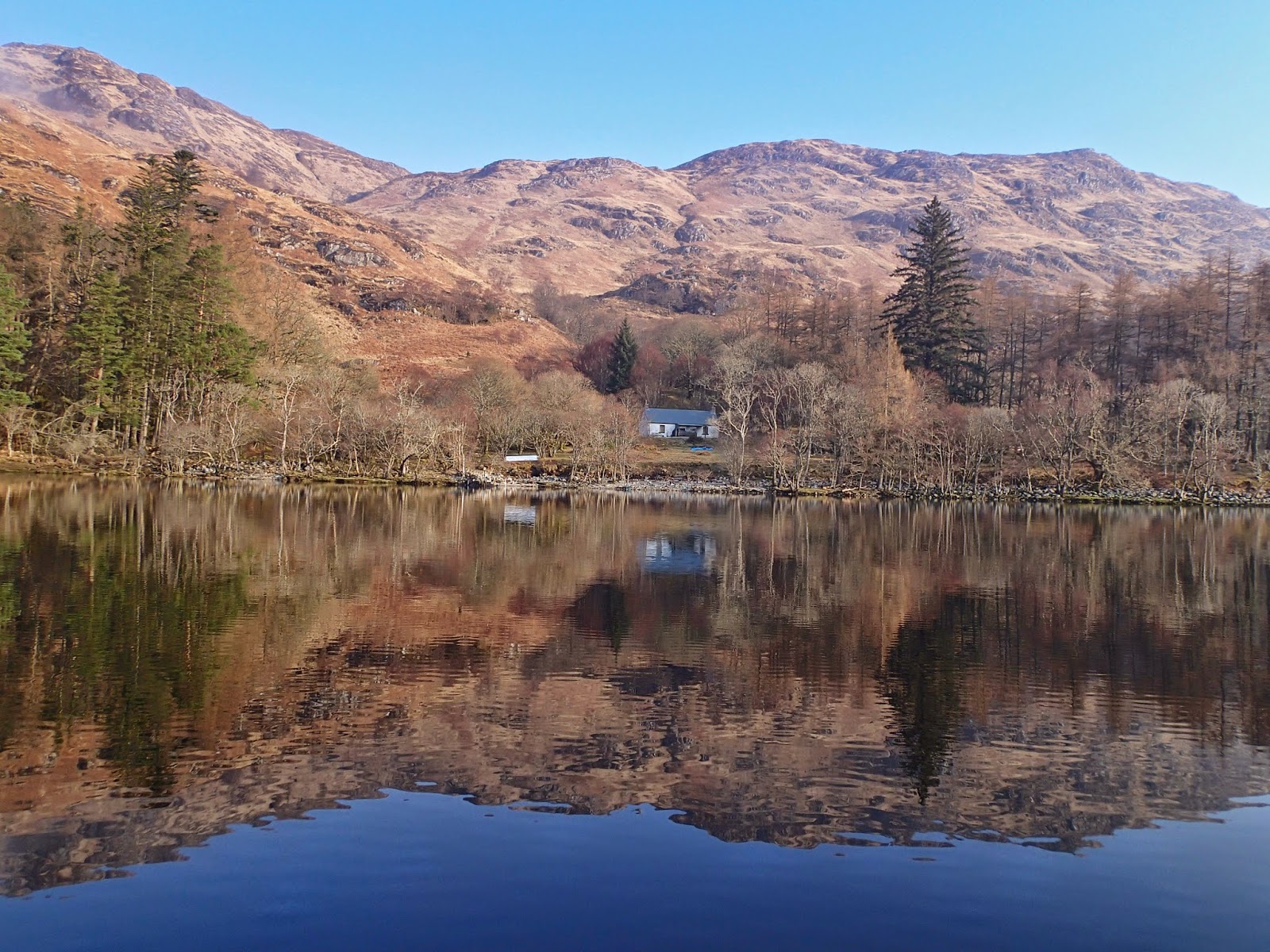 Just beyond Eilanan Comhlach we passed the cottage at Gaskan where the naturalist and author Mike Tomkies lived for many years.  He wrote nine books about Scottish wildlife at he cottage which he called "Wildernesse" including the bestselling "A Last Wild Place" and "Golden Eagle Years".  His has been a fascinating and varied life, and there seems little doubt that the years at Gaskan shaped the astute and insightful observations of this consummate naturalist. 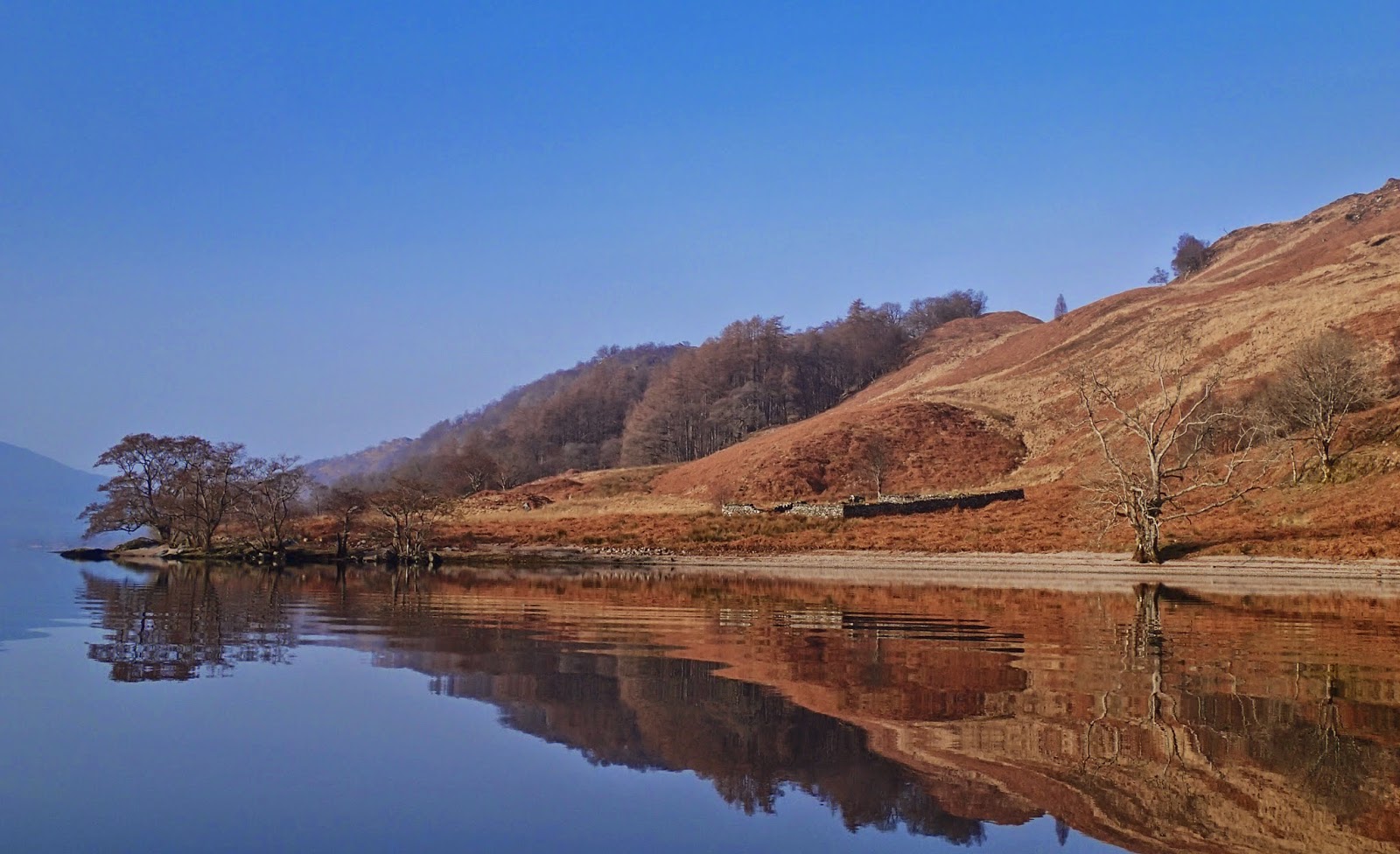 We were startled to find that we'd been on the water less than an hour when we reached this small beach backed by a ruined croft.  I was immensely glad that I'd stuck to the principle of waiting for the right conditions and hadn't attempted this trip solo and in poor weather.

There's no doubt in my mind that this first part of the morning was among the best hours I've ever spent in the outdoors. For sheer beauty, impact and in terms of my emotional response perhaps only one other comes close, a crossing of the Kilbrannan Sound which I was also fortunate to share with Douglas and Mike.

We still had a long way to go, but a short stop to reflect on the "golden hour" we'd just enjoyed seemed very natural.  I approached the beach slightly ahead of the others and had a very strange experience; the water was so still and crystal clear and the reflection so sharp that I couldn't determine where the edge of the water was - the momentary disorientation caused me to lose balance and required a quick corrective stroke...... what a day it was turning into!
Posted by Ian Johnston at 21:50