An echo down the centuries from Eilean Fhianain 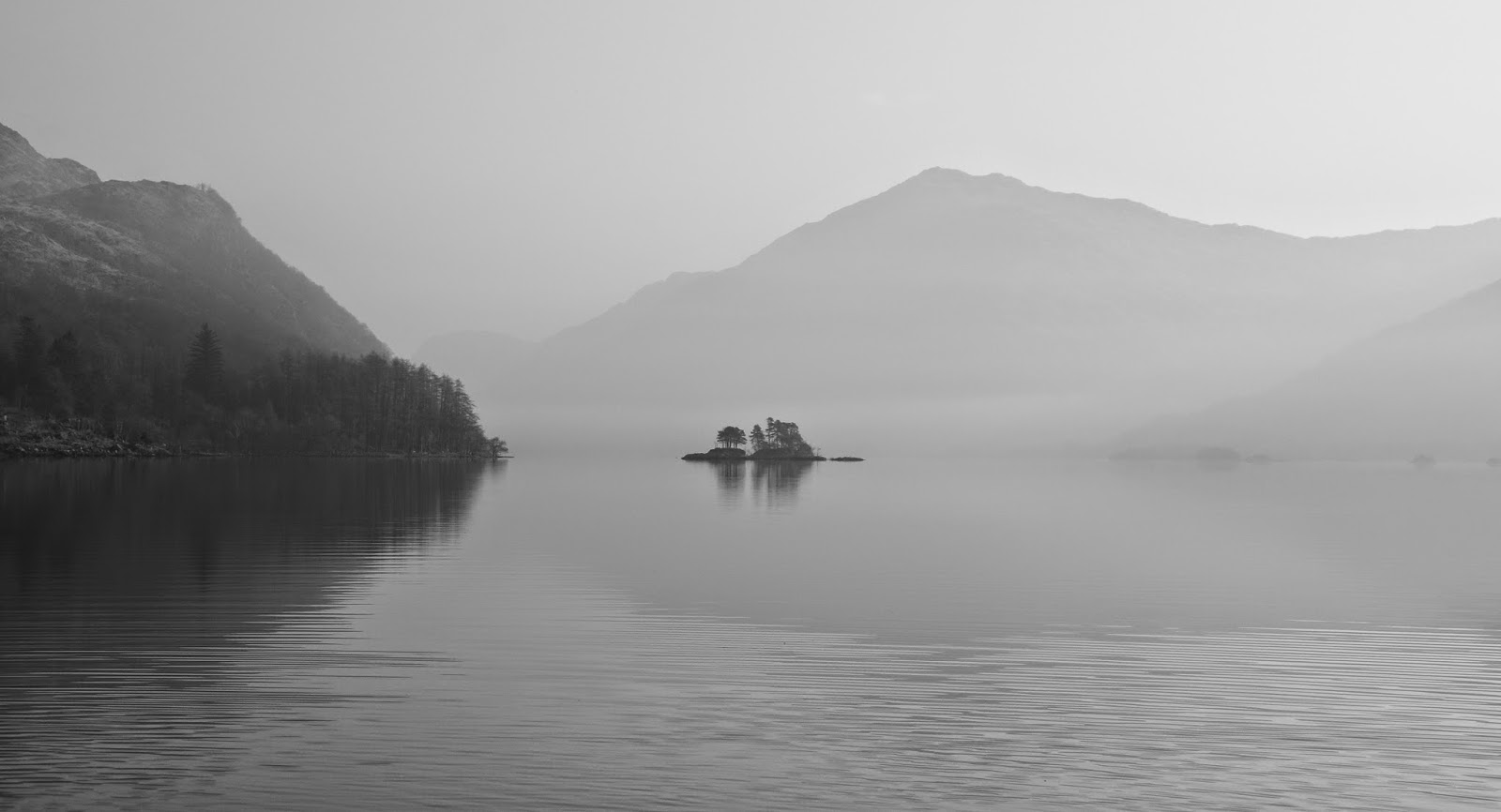 We took a last look back up Loch Shiel before we turned the corner at Camas Drollaman.  From this point the mountains which hem in the upper loch so closely and give it a fjord character begin to fall back and gradually there is a more open character to the scenery.  To have experienced the loch in such still conditions for two days was a rare treat and we wondered whether we could ever match these two days on future visits to Loch Shiel. 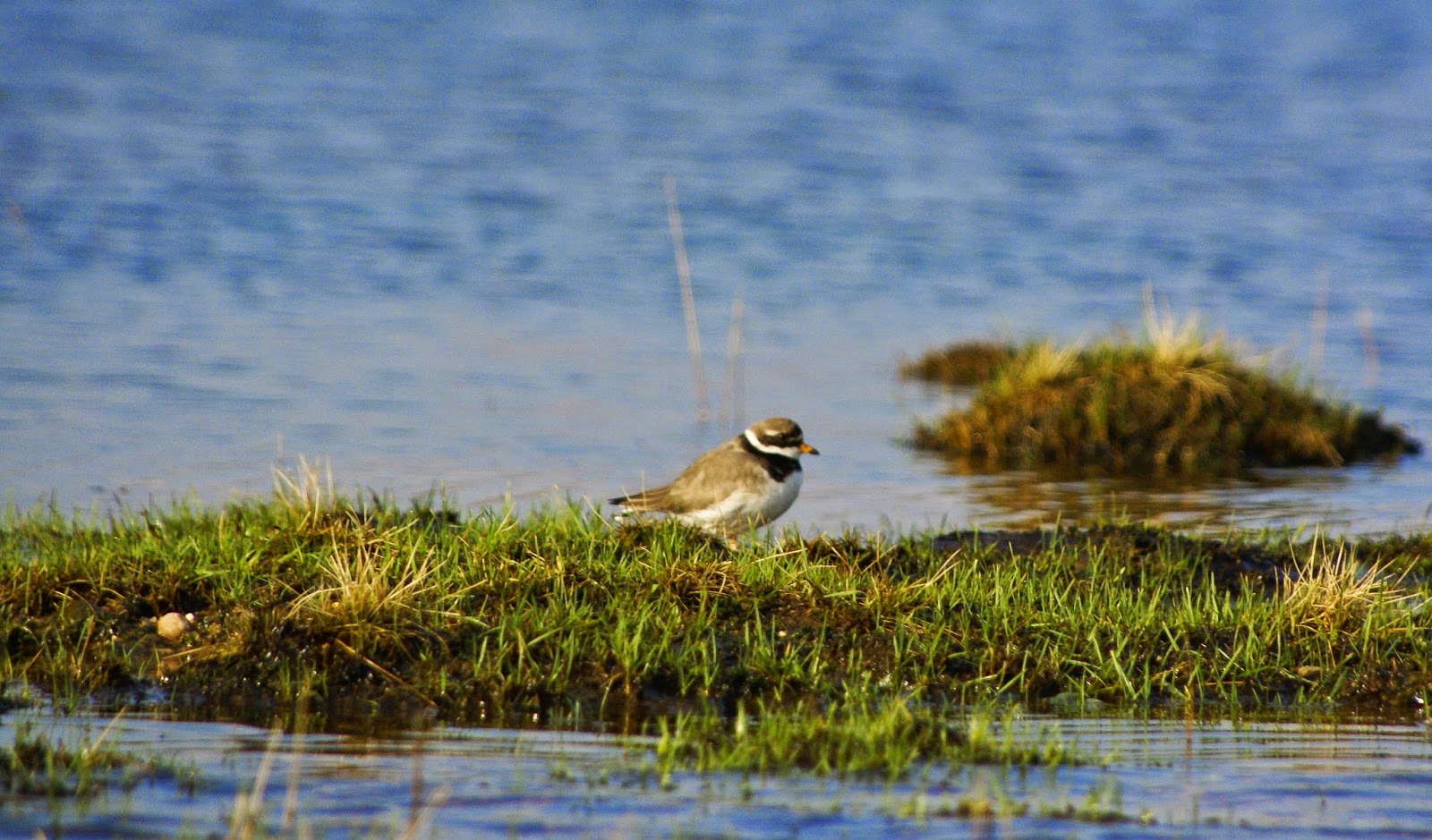 On the low grassy ground near the very point of Camas Drollaman we came across this Ringed Plover (Charadrius hiaticula).  A member of the Plover family and related to Lapwings, these dapper little waders are beginning to breed on more inland sites in addition to their more usual sites on sand and shingle seashore.

The UK breeding population of Ringed Plovers may be less than 6000 pairs, though numbers are boosted in the winter to about six times this figure with birds from Greenland and Canada.  I'm taking a guess that this this particular bird is a resident as it was in breeding plumage; the easiest way to tell the difference is that the bill turns from black in winter to bright yellow-orange with a black tip.

Ringed Plovers lay their beautifully marked eggs in a shallow scrape in sand or gravel.  If the nest site is approached by a predator (or a sea kayaker), the adult will try to lure away the threat by feigning a broken wing. If encountering this display, it's wise to keep a very close watch on where you put your feet as the eggs are so well camouflaged.  Seeing this display in Spring and early Summer on a beach at you intend to camp should be a cue to move on somewhere else to avoid disturbing the birds.  Mike, Douglas and I had last seen nesting Ringed Plovers on Arran in the previous summer and on that occasion had stayed well below the tideline during our second breakfast in order to avoid disturbance. 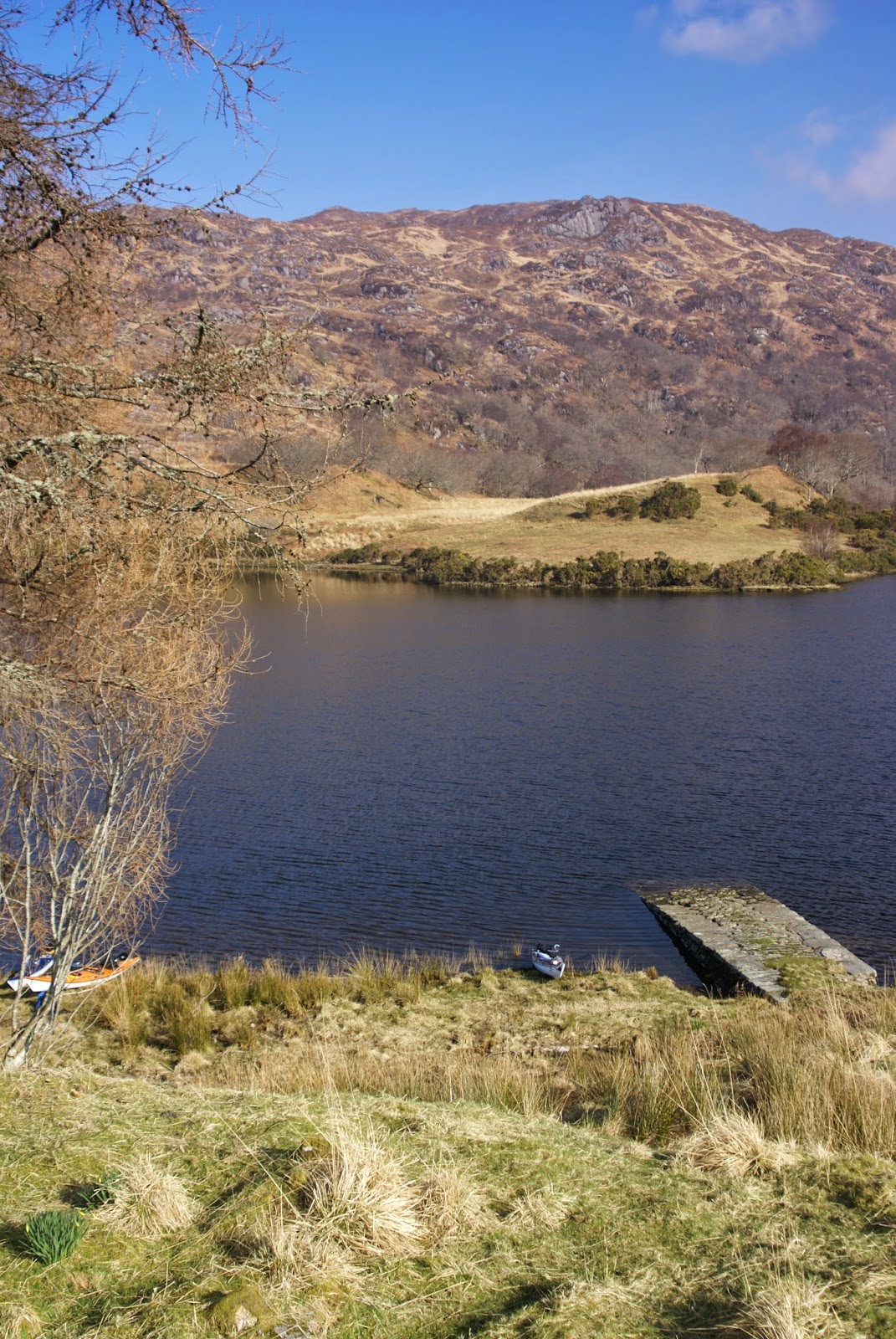 After paddling around Eilean Camas Drollaman, a wooded island which has evidence of a "bloomery" once used to smelt iron, we headed for the narrow twist of the loch containing Eilean Fhianain (Finan's Island).  We landed next to the small stone jetty, which wasn't the easiest landing due to the water deepening quite quickly immediately off the shore.

Finan was an early Celtic saint who is believed to have lived from around 520 to 600AD.  Details of his life are sketchy but he seems to have followed Columba from Ireland and became Abbot of a small monastery on the island now named after him, but which is also known as the Green Island.  He is believed to have evangelised much of Argyllshire, but considering that his name crops up all over Scotland - as well as the obvious Glenfinnan and Kilfinnan, there is a St Finzean's Fair in Perth and a Finzean as far away as Aberdeenshire, he must have travelled extensively

Known as "Finan the Leper" from the disease which afflicted him, he appears to have favoured small islands on lochs; he is also recorded as the founder of at Inisfallen on Lough Leane in Ireland's County Kerry.  Finan died, it is thought, at Clonmore in his native Ireland. 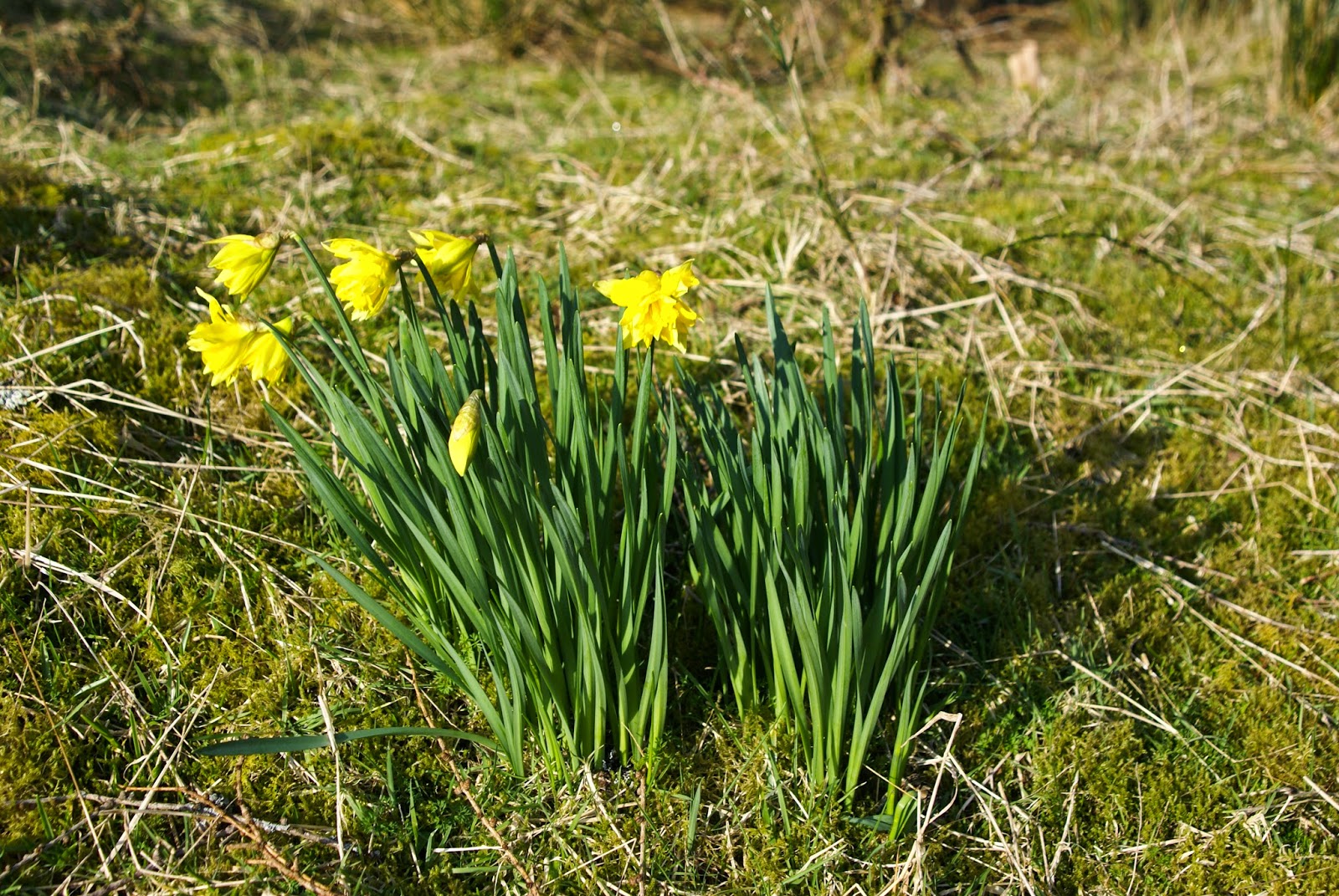 I've often thought that the early Celtic churchmen knew a good spot when they saw one, and the island which Finan chose as his base is certainly that.  A grassy green hump formed of glacial sand and till, it sits away from the shadow of the high hills and has great a view up Loch Shiel and down to the sea at Moidart.  Crucially for the purposes of the early church it sat in a prominent position on the sea and land routes through Argyll, Sunart and Moidart.

The first of the daffodils were opening on the sunny slopes as we climbed up to explore Finan's island, a splash of bright yellow against the late winter colours elsewhere. 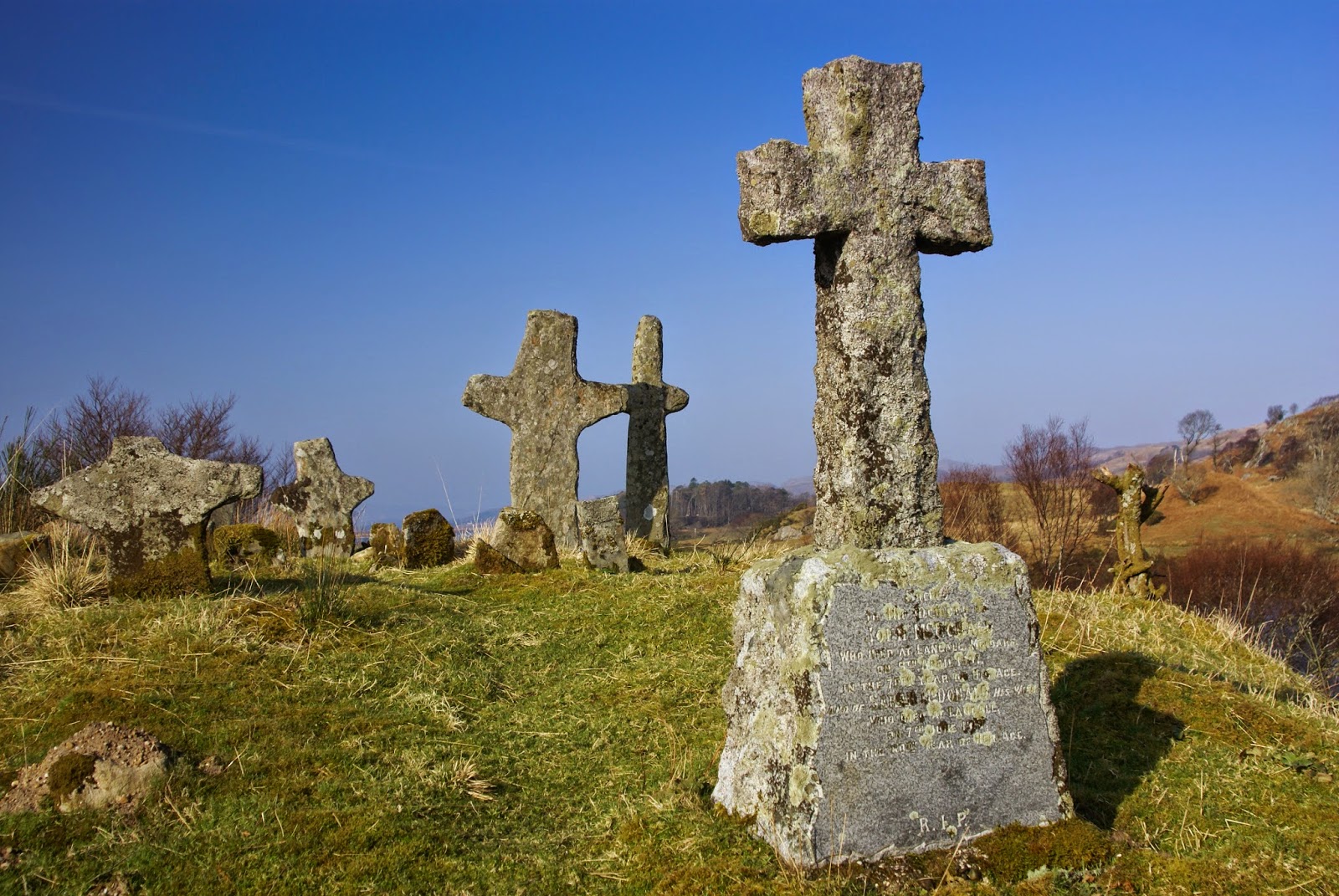 The top of the island is largely given over to a burial ground; some of the graveslabs here are very old, probably early mediaeval, but though some of this group of crosses appear very old they date from the 18th century.  The island was a traditional burial place for the chiefs of Moidart, indeed it may have already been in use as a burial place when Finan arrived in the 6th century.  The island is still used as a place to commemorate the dead, we saw several recent stones marking the interment of ashes - a continuity of use which would surely please Finan the Leper.

A very fine Celtic cross monument stands in a prominent spot overlooking lower Loch Shiel, commemorating  a Reverend Charles MacDonald, priest of the diocese of Argyll and the Isles who also wrote a history of Moidart and of Clanranald. 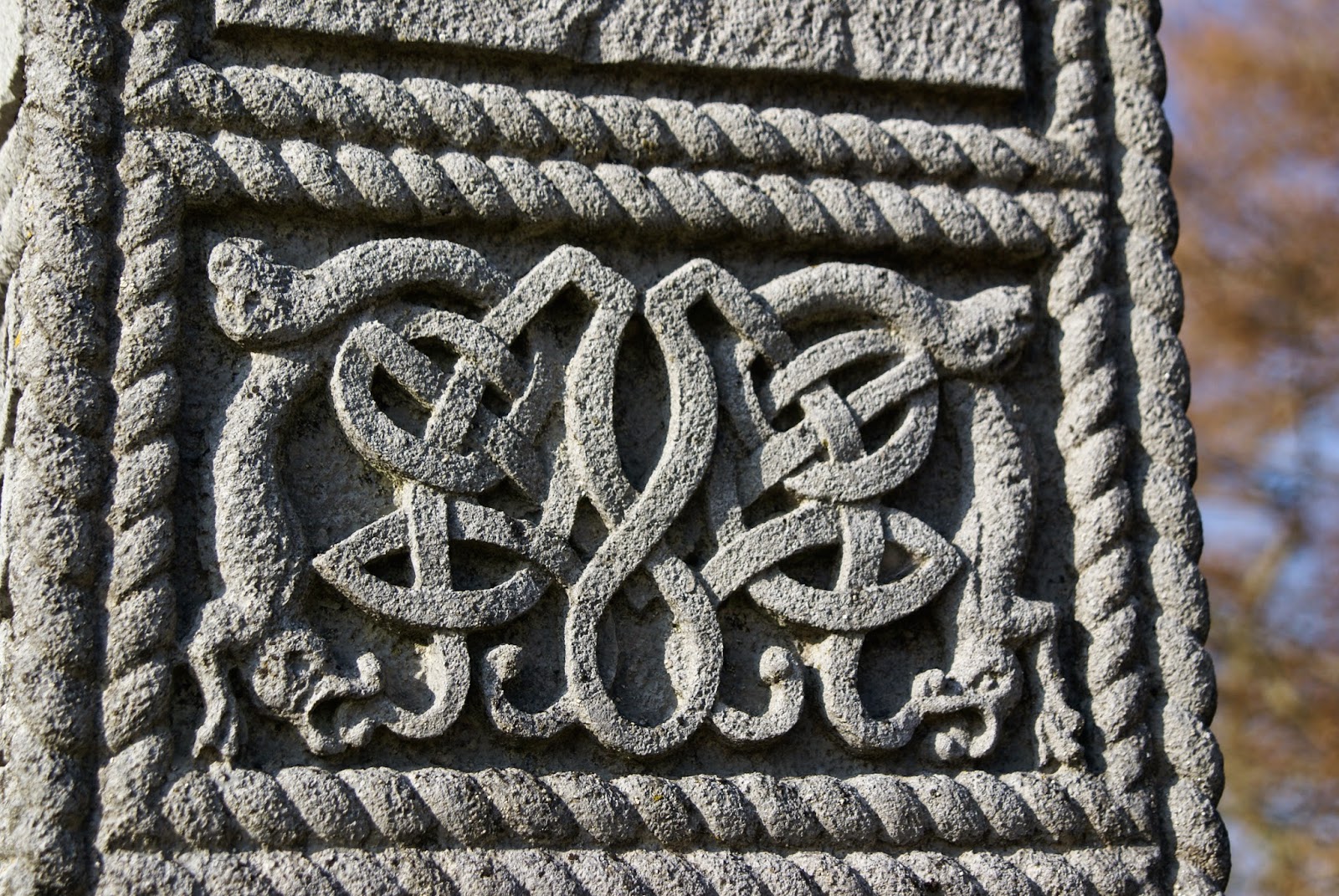 The stonework on the monument is very fine indeed with celtic motifs, designs and a range of tail-casing animals.

The ruins of a stone chapel sit in a small hollow high on the island, dating from about the 16th century.  It was the centre of worship for those of the Catholic faith but fell into disuse in the 1700's, possibly in the bloody aftermath of the 1745 rebellion.  The visible ruins themselves replaced a wooden chapel which was probably built by Allan MacRuari, a chieftain of Clanranald who had a distinctly violent reputation.

But predating even this is a remarkable artifact - and one which you might reasonably expect to find in a glass case in a musem rather than exposed to the elements in this place. 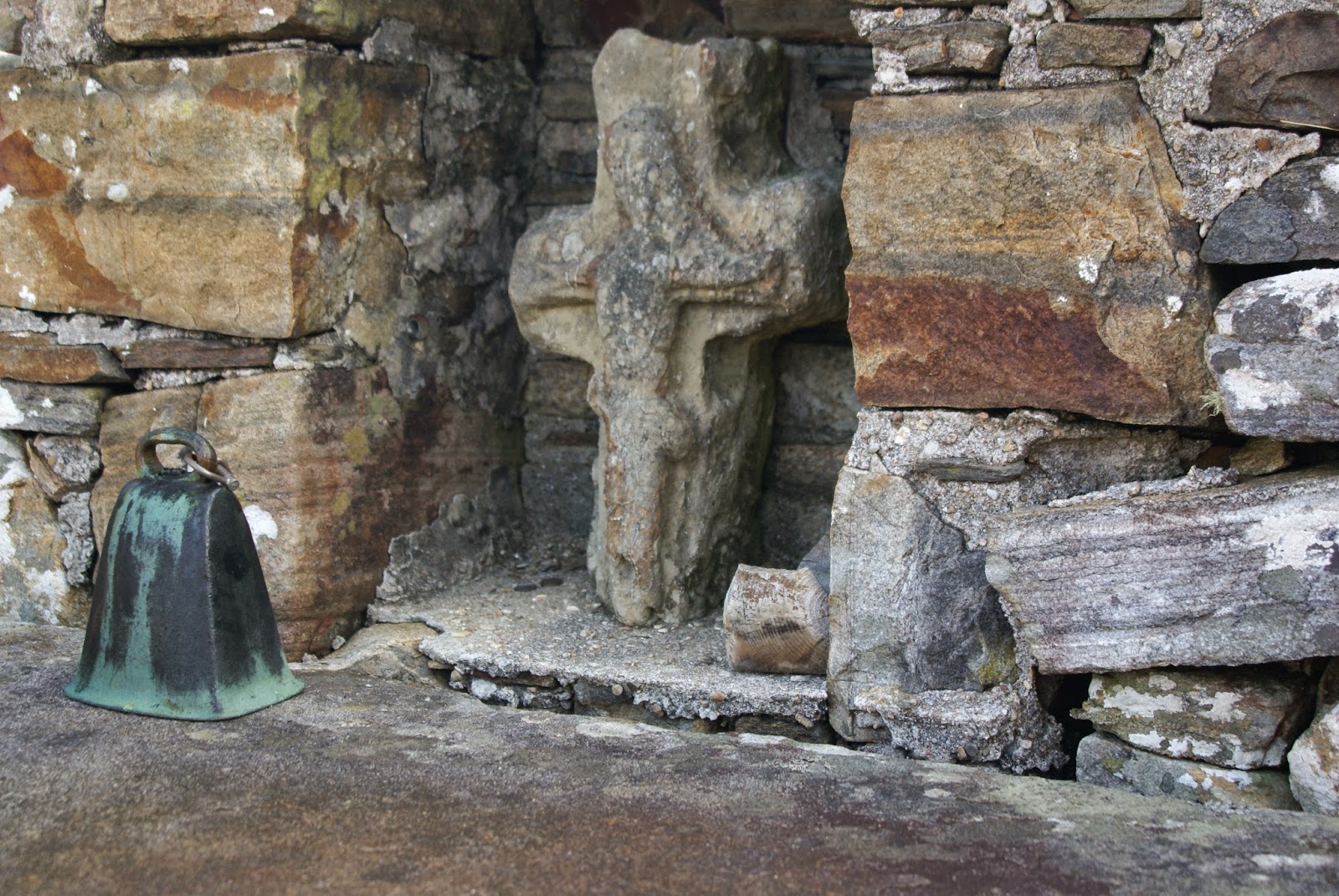 On the roughly formed altar slab, sitting next to a weathered stone cross is a bronze bell which dates from the 10th century.  It takes a moment for the significance of the thing to sink in - a seamless bronze hand-bell which is in excess of 1000 years old on a small island in Loch Shiel.....

It has survived the ravages of time, of the vikings and all the tumult of the years since to remain intact on the altar here, secured with a small chain.  There are of course stories telling of the curse which will befall any person removing the bell which must have been persuasive enough for the authorities to leave it in place.

We can vouch for the fact that the bell is fully functional, an experimental ring brought a clear tone which echoed back in the still morning air and caused deer over a kilometre away on the mainland to raise their heads - it's an echo which has been heard here down ten centuries. 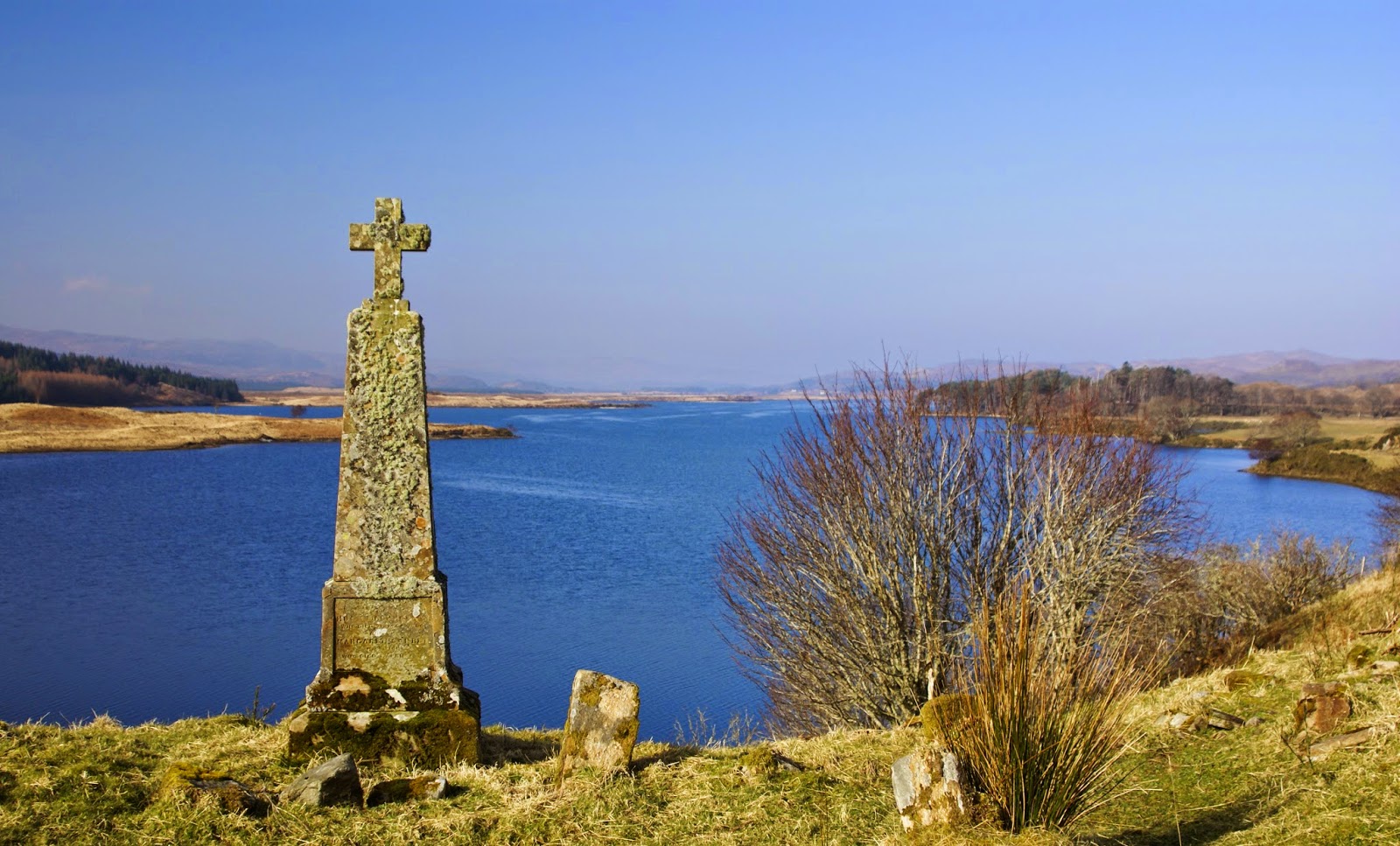 Eilean Fhianain is a real gem of a place and very well worth a visit.  We spent an hour or so exploring the island and its history before returning to the jetty to make coffee prior to setting out again on our route to the sea.   To have simply paddled past, intent on racking up distance would have been a great shame, one of the advantages of paddling with like-minded friends is that small explorations such as this are a real highlight of the journey as a whole.

From Eilean Fhianain we would paddle the shallow lower part of Loch Shiel and we now started to think ahead to our transition from fresh to salt water.
Posted by Ian Johnston at 21:56