An Caladh - the harbour

On the crossing from Kames back towards Bute we got into the wind shadow of the hills at the north end of the island and the wind died away completely. 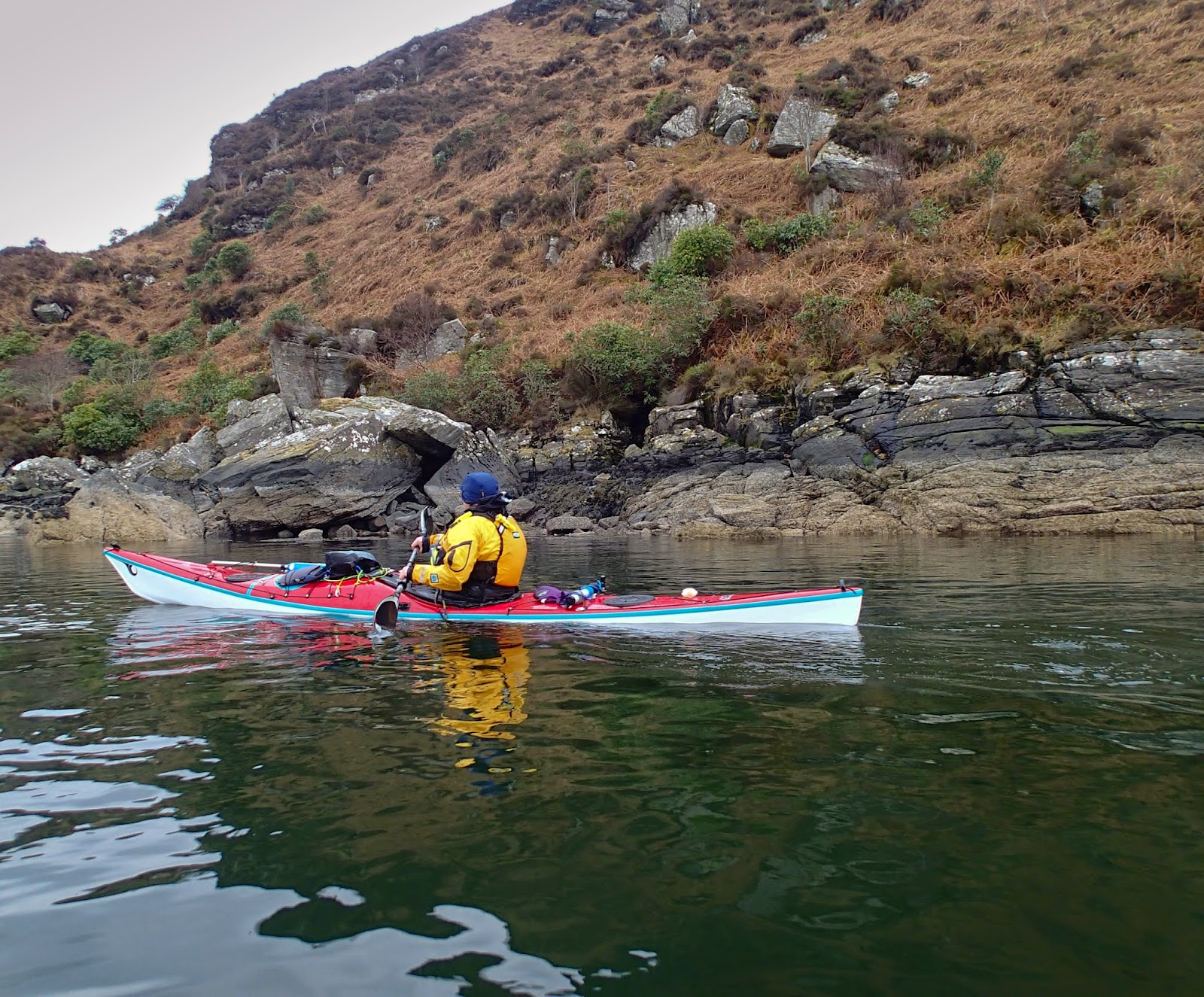 The Highland Boundary Fault passes through the centre of Bute along the trench of Loch Fad (Long Loch) and divides the island's geology and landforms markedly.  South of the fault line the land is comparatively low-lying with rolling, fertile farmland pierced by volcanic rocks.  North of the fault line the landscape is most definitely Highland in character with steep slopes, craggy hills and much poorer soil.  We kept close along the shore enjoying the quiet atmosphere and the wader calls as we went. 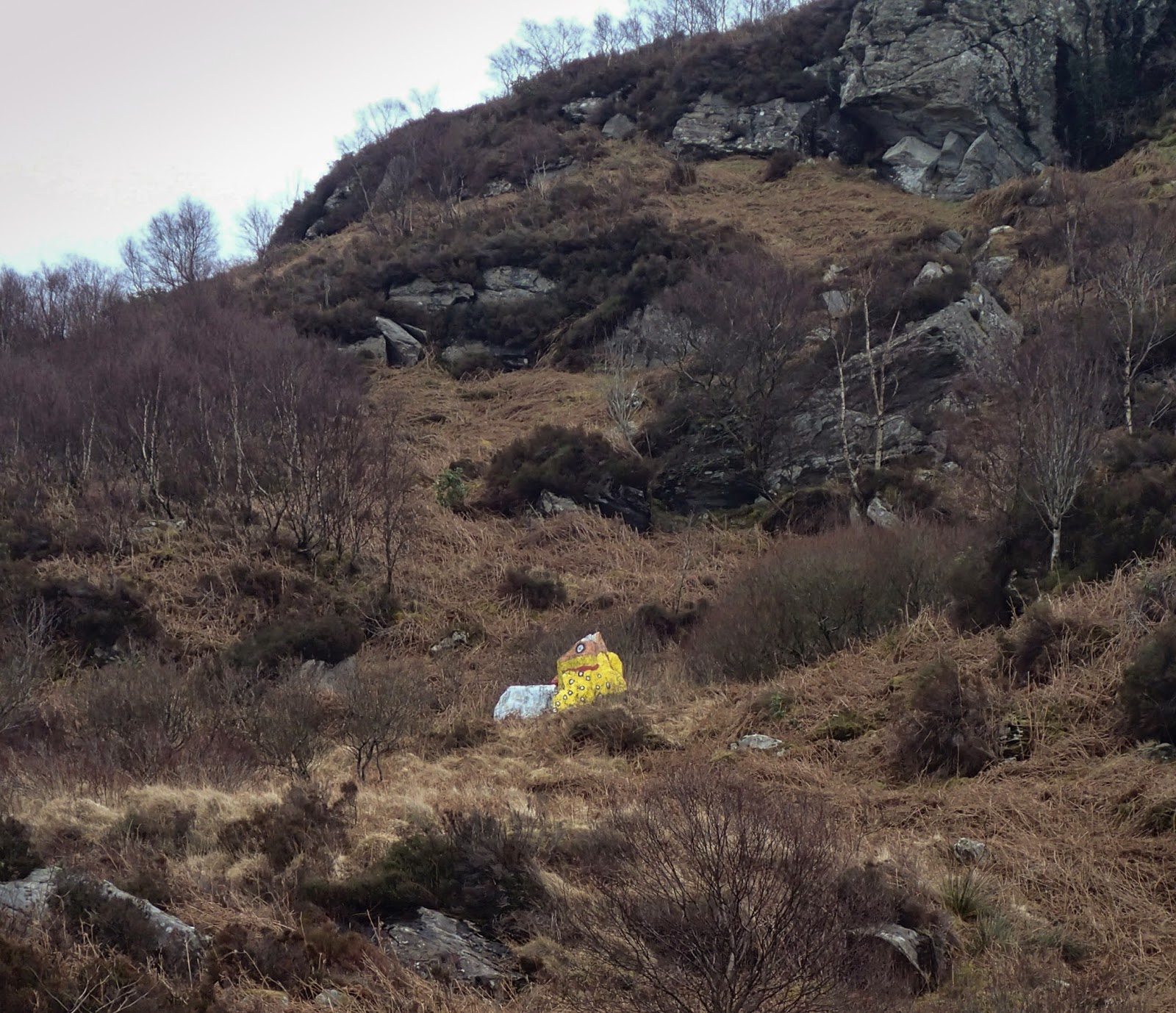 Near the northernmost point of the island stand the Maids of Bute, two large rocks which were first painted over 100 years ago.  When I first saw the Maids they were decorated in simple red and white colour bands but lately the decoration has become garish, the rocks painted to resemble cartoon creatures.  They're still an interesting and unusual feature of the landscape though! 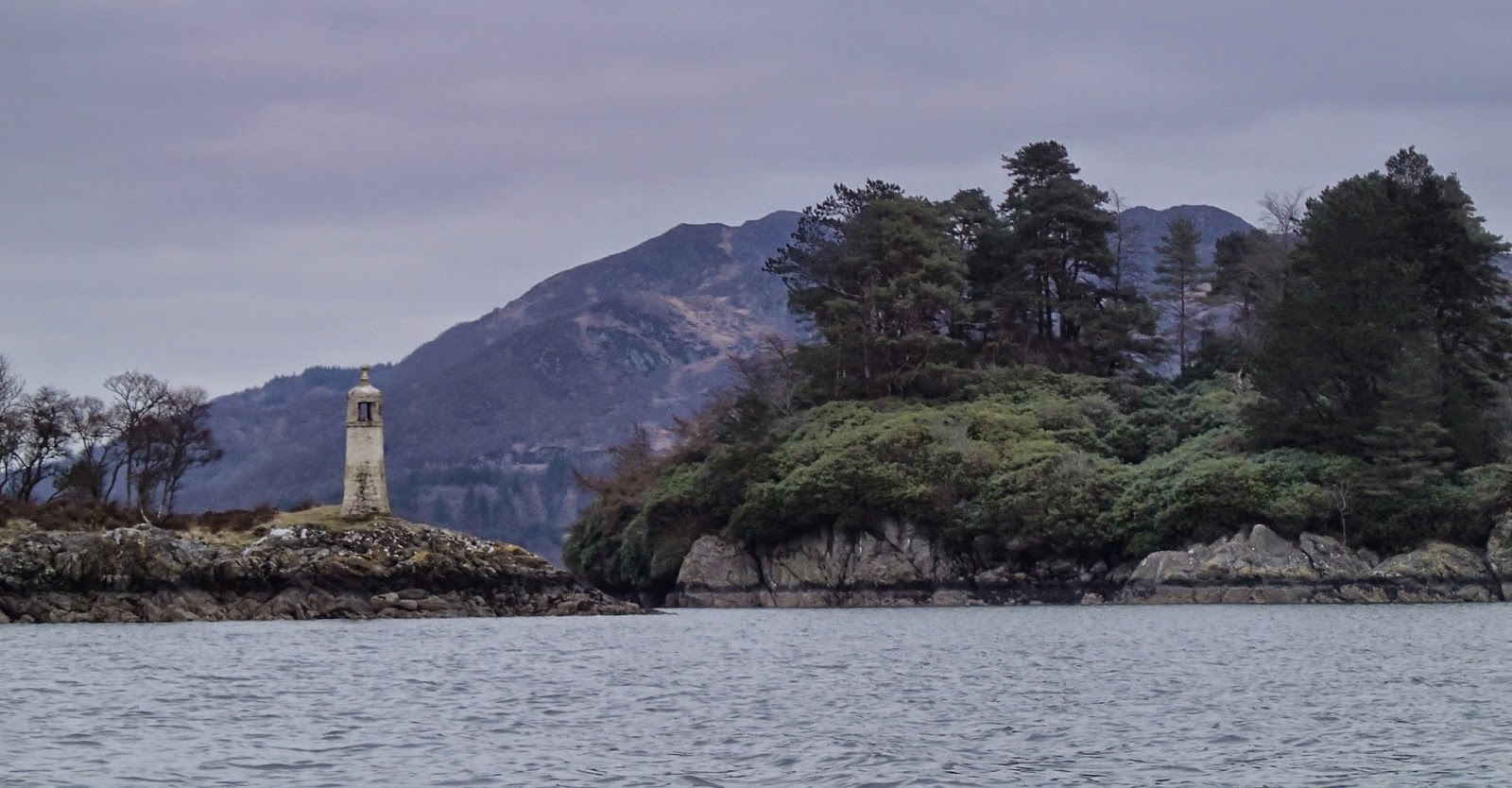 Turning away from Bute as we passed the Maids, our next destination was An Caladh (the harbour), a protected bay near the mouth of Loch Riddon formed by the close proximity of Eilean Dubh (Black or Dark Island).  The island has been overrun by Rhododendron originally planted on the Caladh estate as decorative shrubs, but the larger trees rising above the choking vegetation host a large heronry.  Any visit here in late Spring is accompanied by the unearthly clamour, shrieks, clacking and hissing of the young herons. 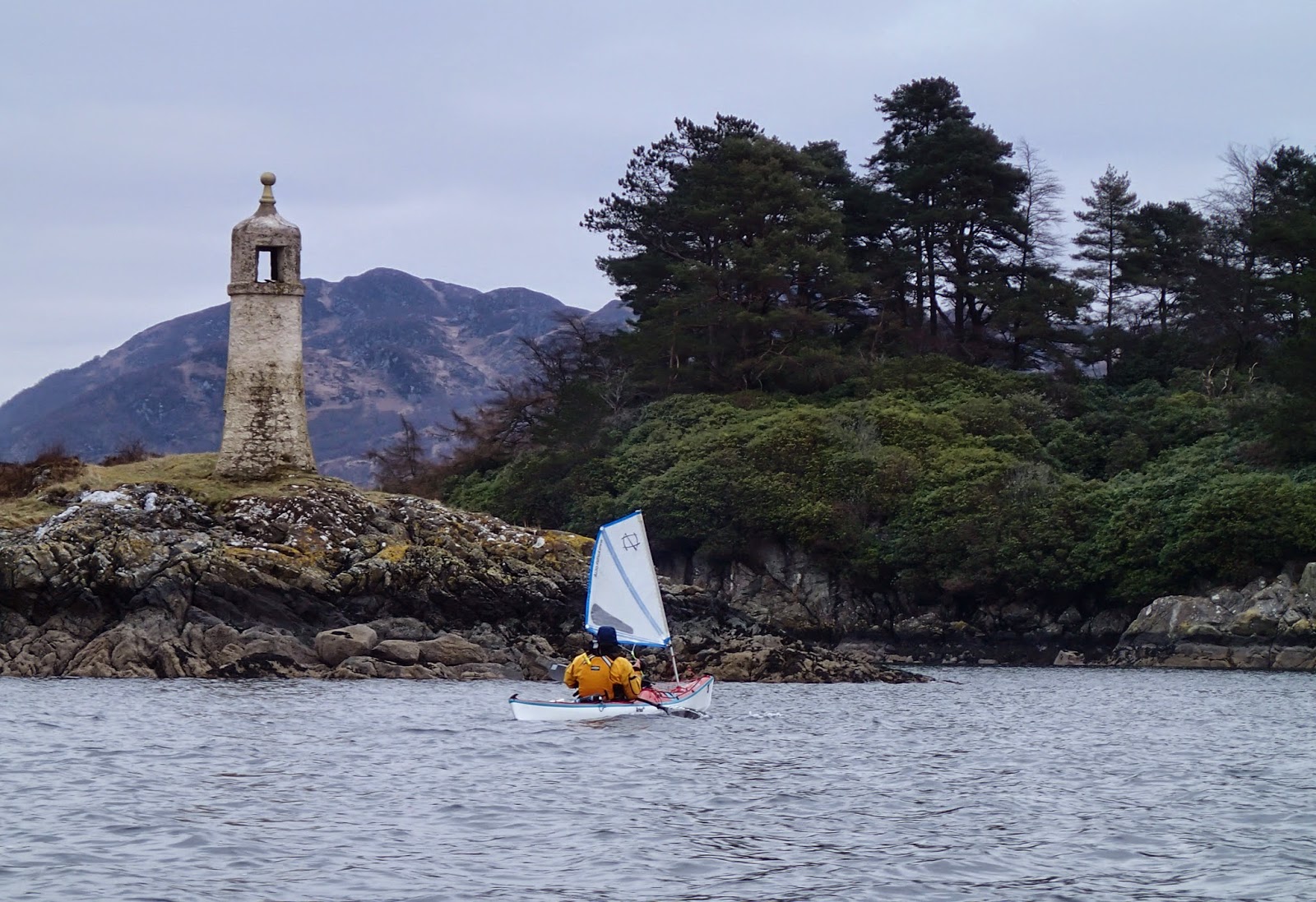 The entrance to An Caladh is marked by a stone light tower which once held an oil lamp, again dating from the heyday of the big estates.  Nowadays the bay is a popular anchorage for yachtsmen transiting the Kyles of Bute. 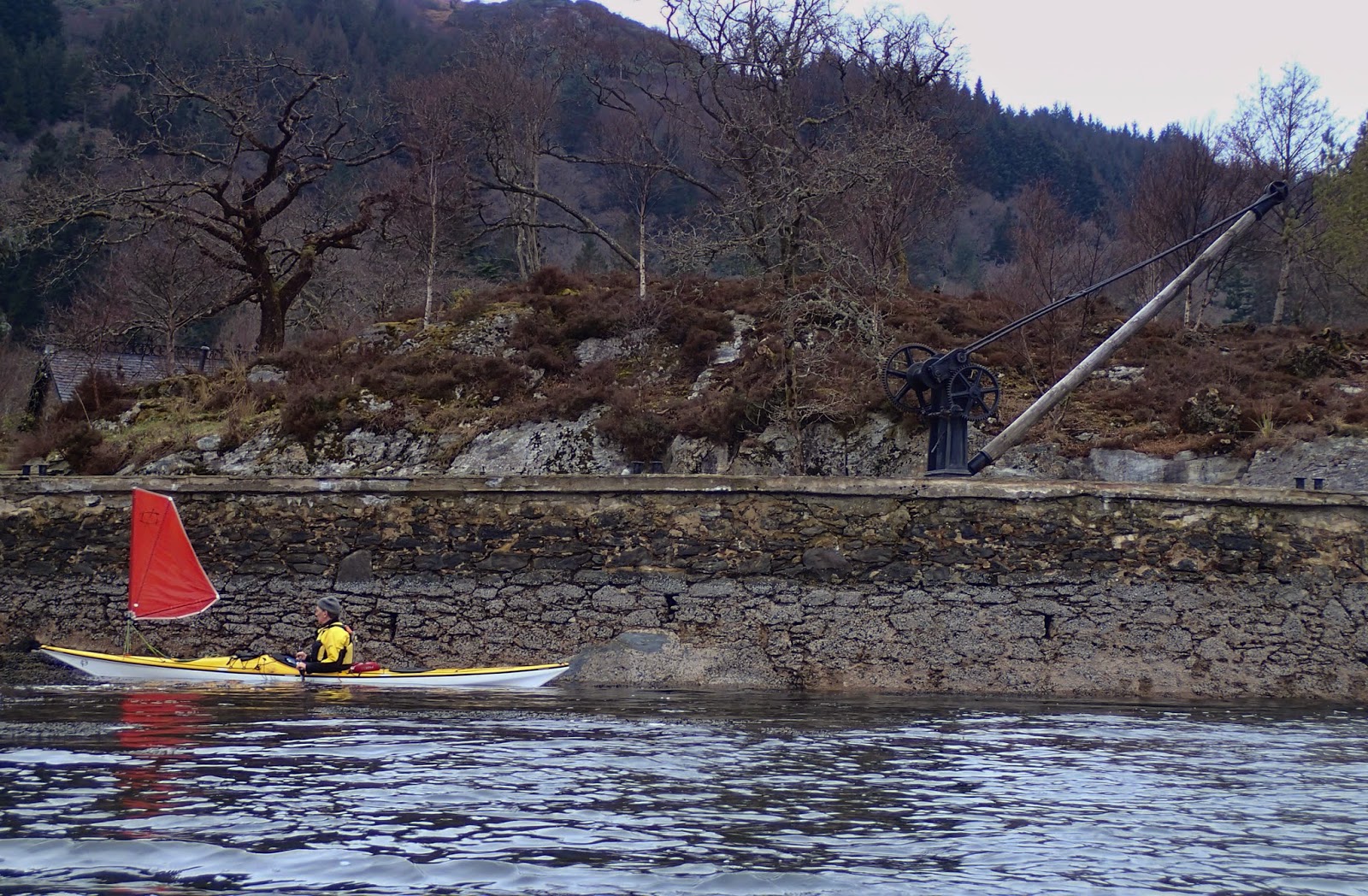 At one end of the bay is the jetty once used by Caladh estate, which was latterly owned by the Clark family (of Clarks shoes).  The boathouse and harbour cottages are now holiday homes but one former occupant was an inspiration for the author Neil Munro when he wrote the series of stories featuring Peter Macfarlane, the Gaelic-speaking skipper of a Clyde Puffer - better known as Para Handy 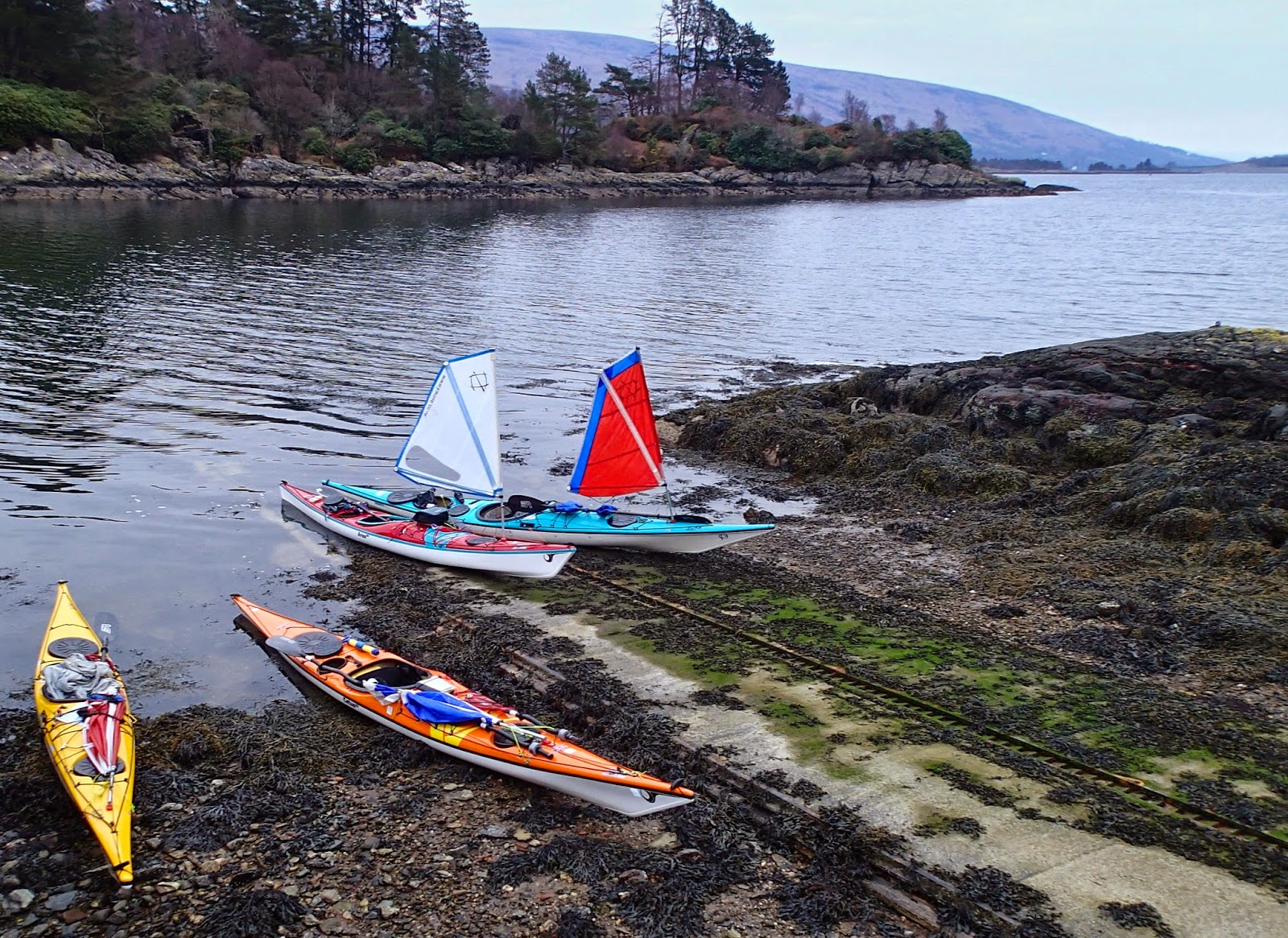 As the houses were unoccupied at the time of our visit we landed on the slipway and took second luncheon on the manicured turf of the jetty....... 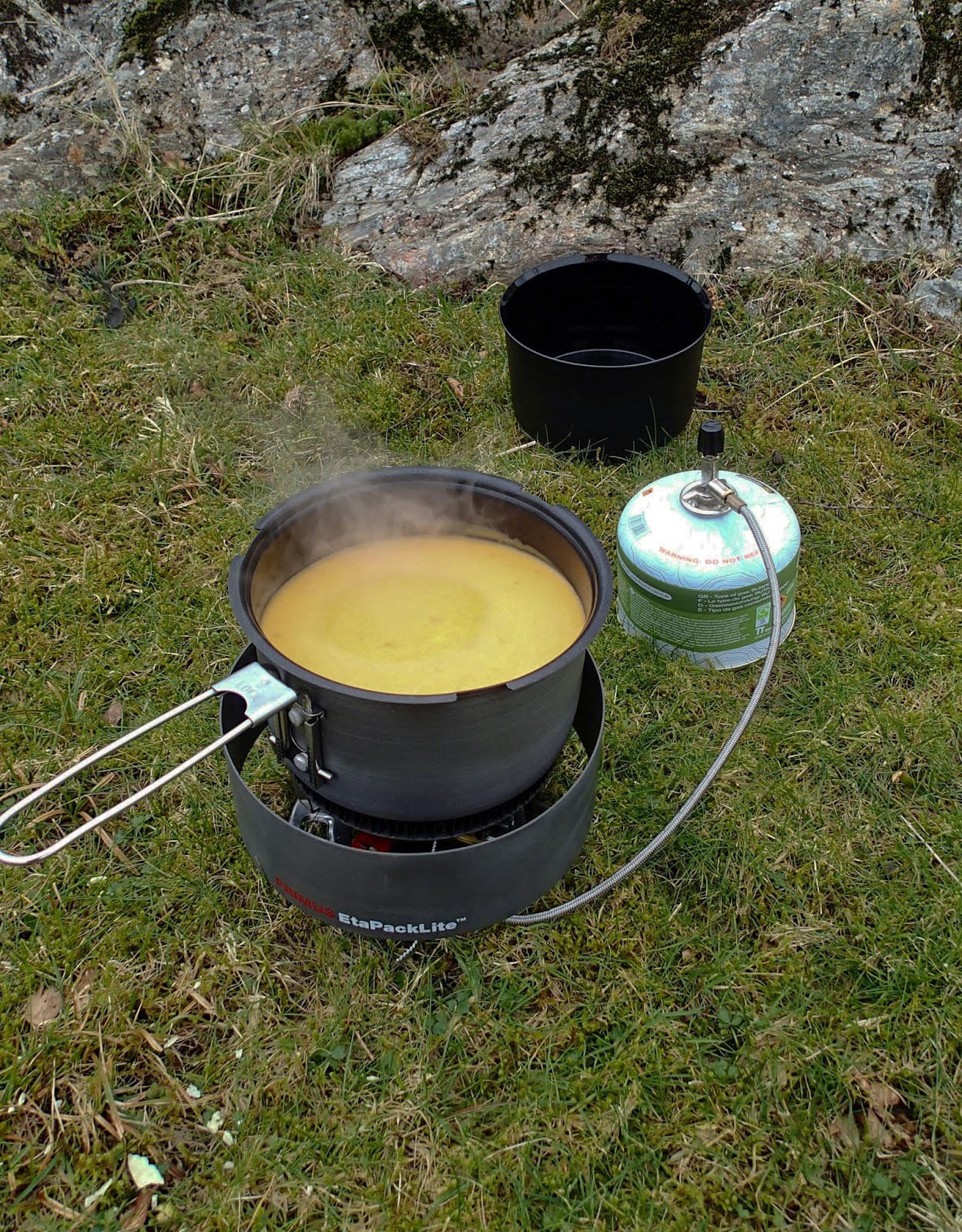 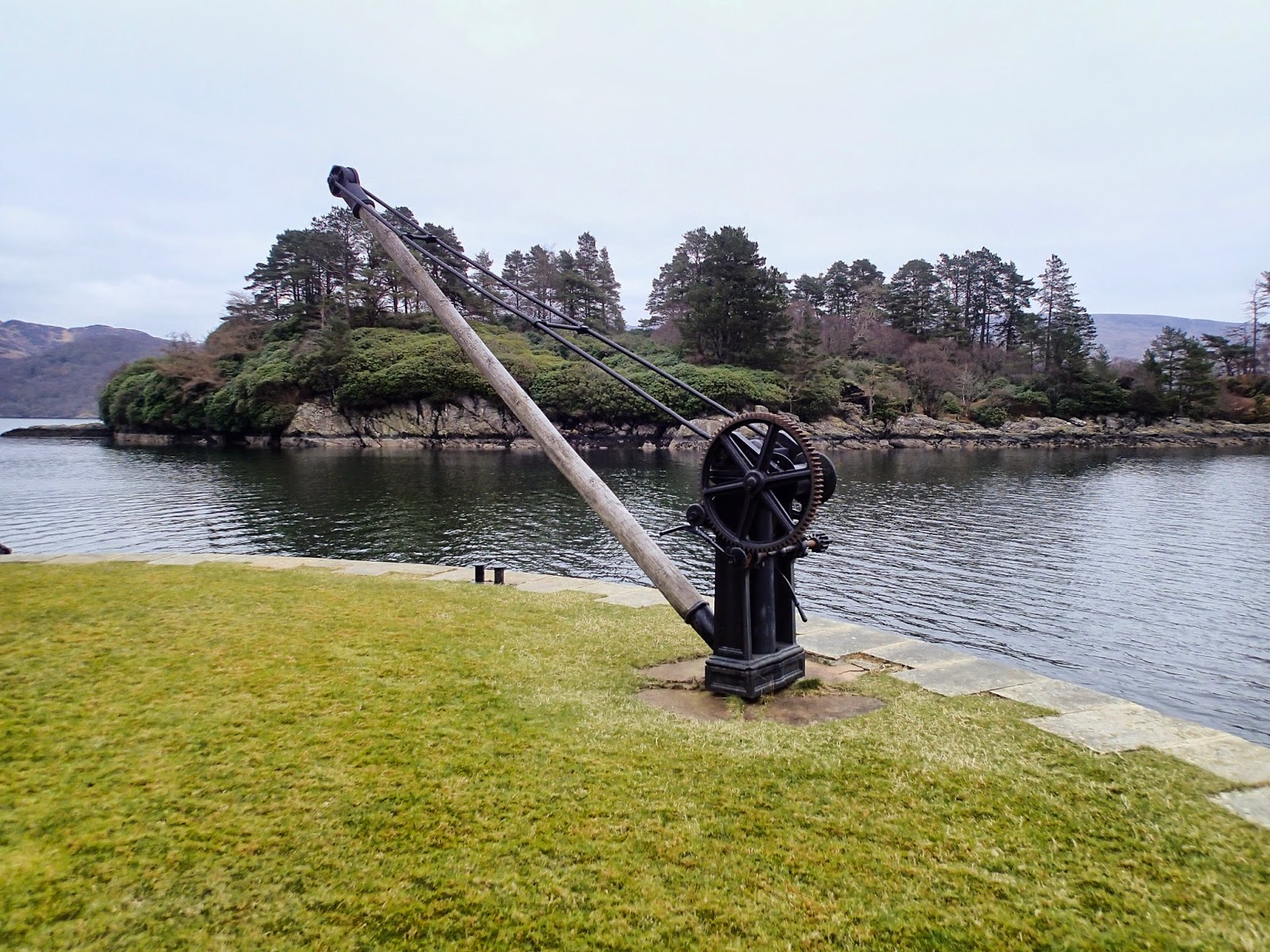 The jetty is complete with a remarkably well-preserved derrick crane.  Aside from Puffers, yachts and kayaks, other vessels have used the shelter of An Caladh.  During the Second World War, Glen Caladh Castle was commissioned into the Royal Navy as HMS James Cook.  The area around the Kyles and Loch Riddon was utilised to train beach landing and coastal navigation to Landing Craft crews, the name of the establishment is a reference to the new techniques which Captain James Cook introduced to the Navy.

The area was also utilised for the training of X-Craft crews.  Based at Port Bannatyne on Bute and headquartered in the Kyles Hydro Hotel which was known as HMS Varbel, X-Craft miniature submarines were designed to attack shipping in harbours and anchorages, and were used in attacks on the German battleship Tirpitz as well as the sinking of two Italian cruisers.  The four-man crews of these 35 tonne vessels displayed incredible skill and bravery both in training and on operations; in total 39 men were killed serving in X-Craft and 68 awards for bravery were made, including four of the Victoria Cross.  A memorial to the service is displayed at St Ninian's church in Port Bannatyne.

An Caladh is a place which nowadays has a calm and tranquil atmosphere; there are woodland walks nearby and it's well worth a visit whether by water or on foot.