A picture of Loch Moidart 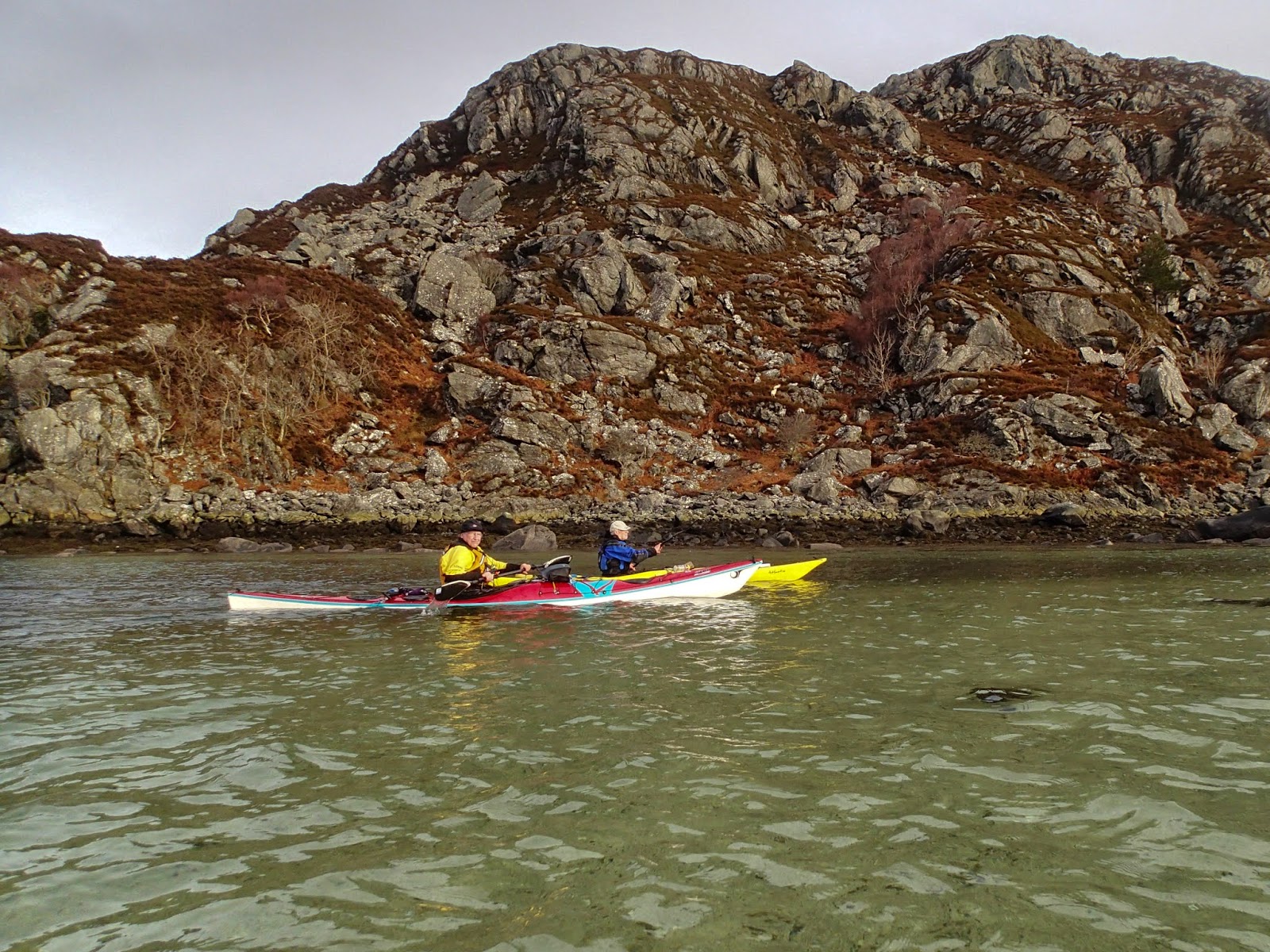 We paddled into the North Channel of Loch Moidart, hoping that we'd not have too far to carry the boats as the channel rapidly emptied.  We stuck close to the north (mainland) side of the channel to keep out of the main ebb stream and found that we were in luck...... 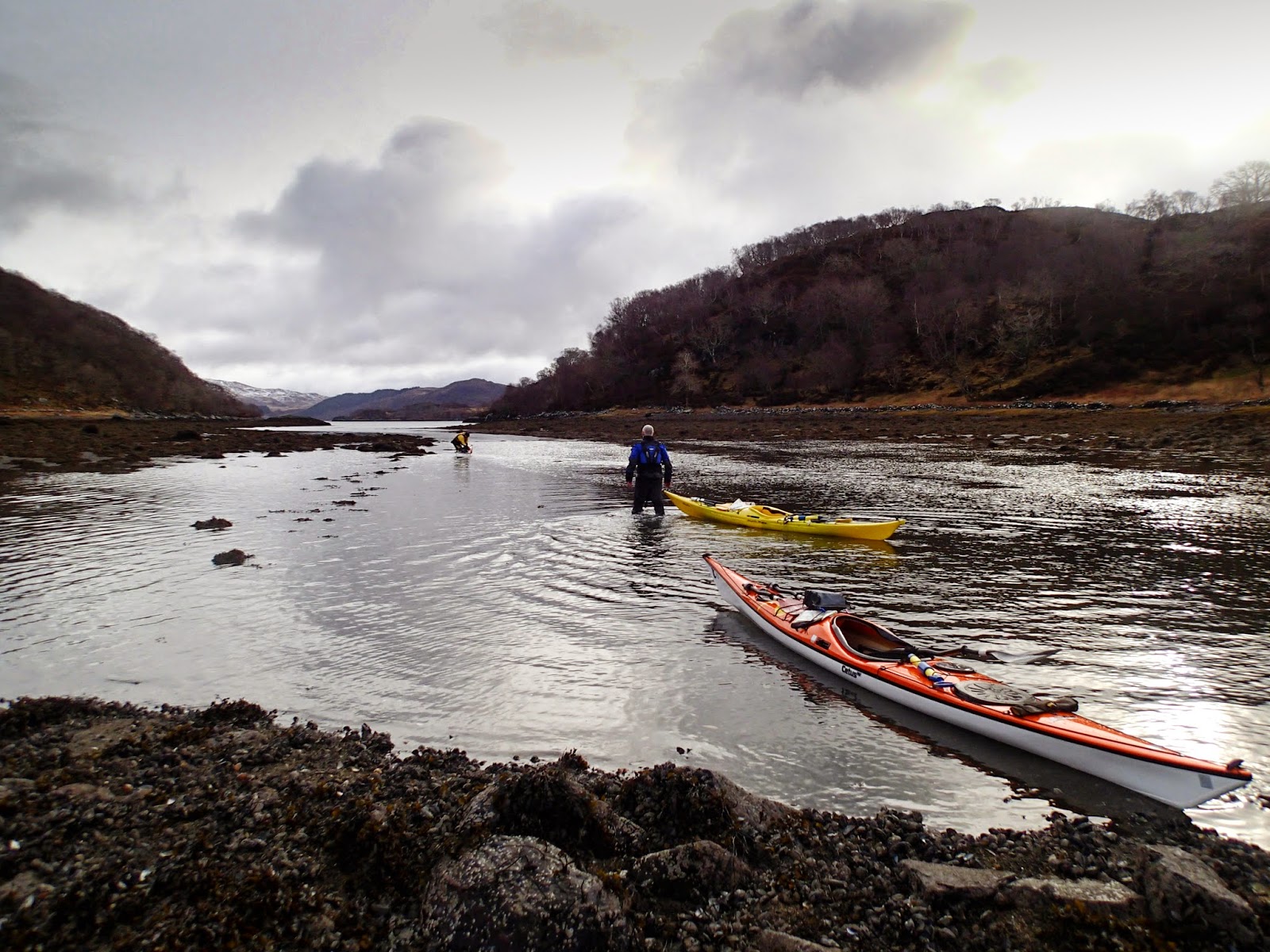 ...we were able to paddle right up to the causeway before lifting our boats over and into the water the other side.  It was then a bit of a race; as we pulled our boats through the very shallow water, it was emptying almost as fast as we walked!  After about 120 metres we gained enough water under our keels to paddle out into the inner part of Loch Moidart.

This isn't the first time we've been in a race against time to get through the north channel !  Our experience is that above half tide the channel should be passable with the possibility of a short portage over the causeway.  Below that there is the distinct possibility of a long and muddy portage. As often here, the two channels funnel the wind between the mainland and the steep rocky sides of Eilean Shona while the wind is much lighter in the loch itself; exploring Loch Moidart can be a great day when the swell and/or wind make other venues unsuitable. 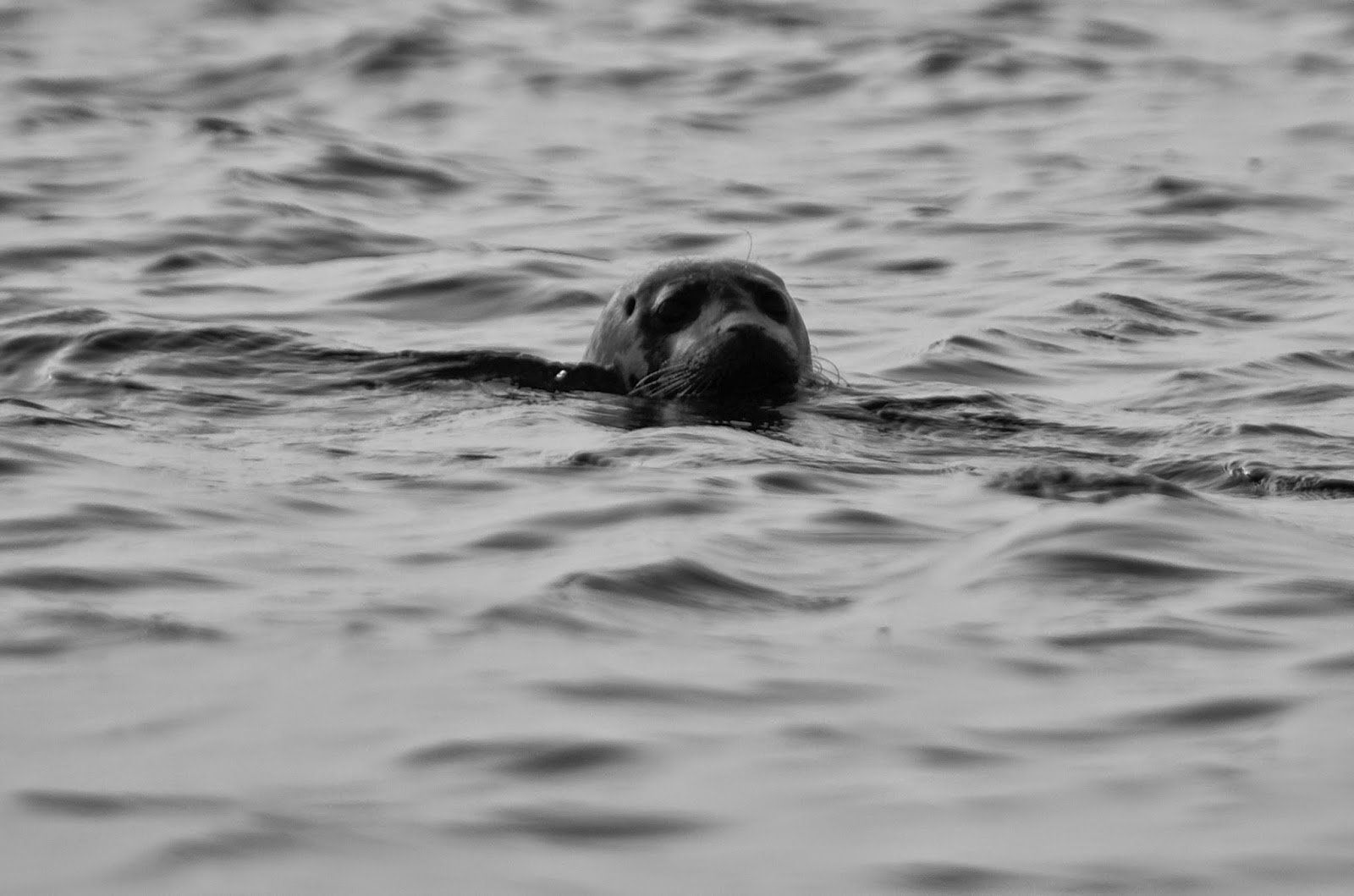 This was the first day on which I'd carried a DSLR on the foredeck of my kayak in addition to the compact camera in my buoyancy aid.  Having seen just how effective the Ortlieb Aquazoom waterproof camera bag has been in protecting Douglas' very expensive camera, I recently purchased the same bag - secured to the deck elastics of my boat with small karabiners it kept my camera dry and within reach.

I was able to get some pictures which my compact camera simply can't capture, and the greater depth of field from the 28-200mm zoom lens opened up some new options for images.  I did, however find that there's quite a learning process involved in using a DSLR with viewfinder in anything other than flat calm conditions...... 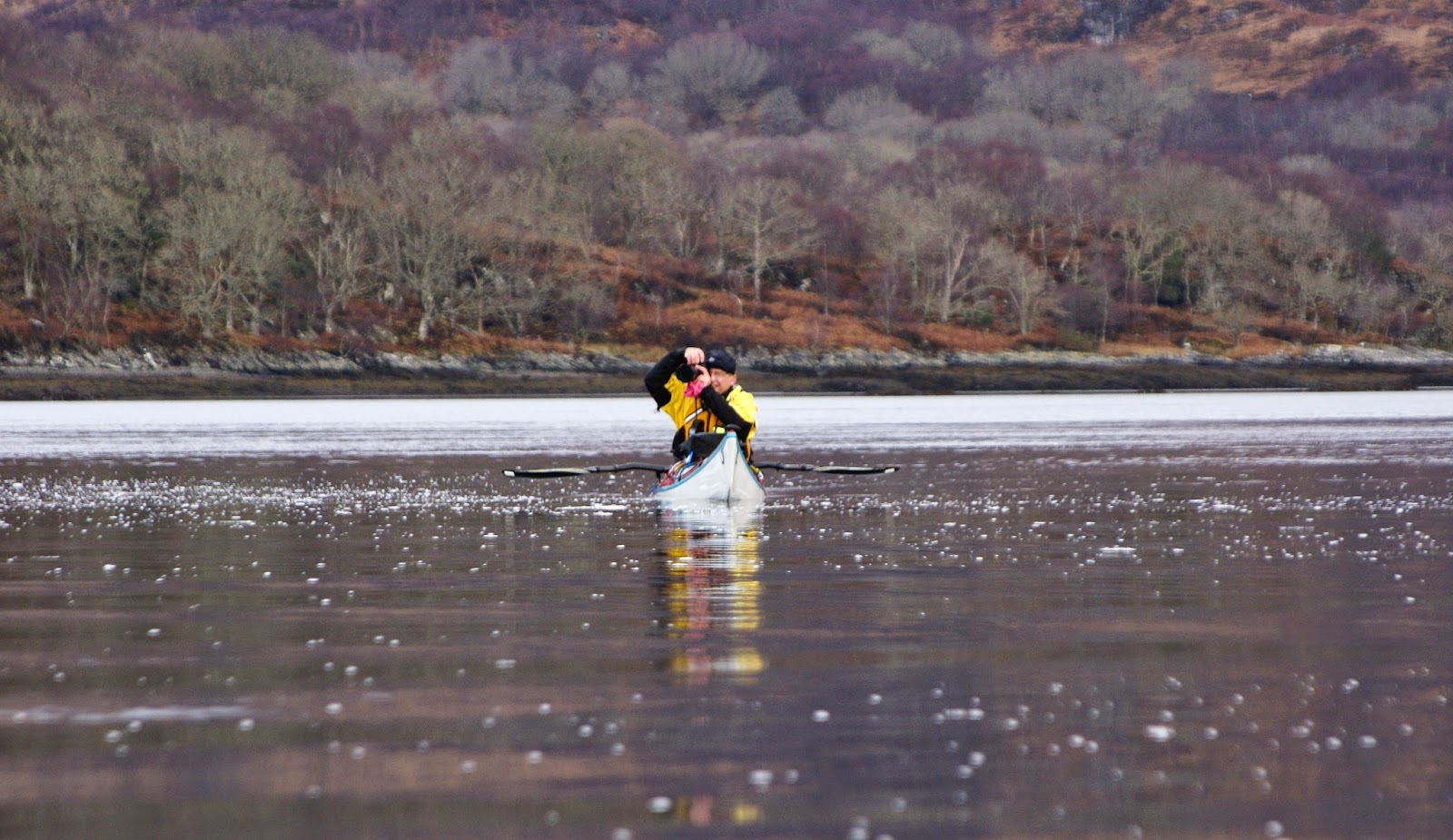 Composing and taking an image requires much more in terms of boat positioning, torso rotation and balance when using a DSLR as the hands need to be brought to or above shoulder level and the eyes concentrated through the viewfinder on the image rather than the immediacy of the kayak.  Here Douglas demonstrates perfect balance whilst composing an image; it will take me some considerable time to get the hang of it! 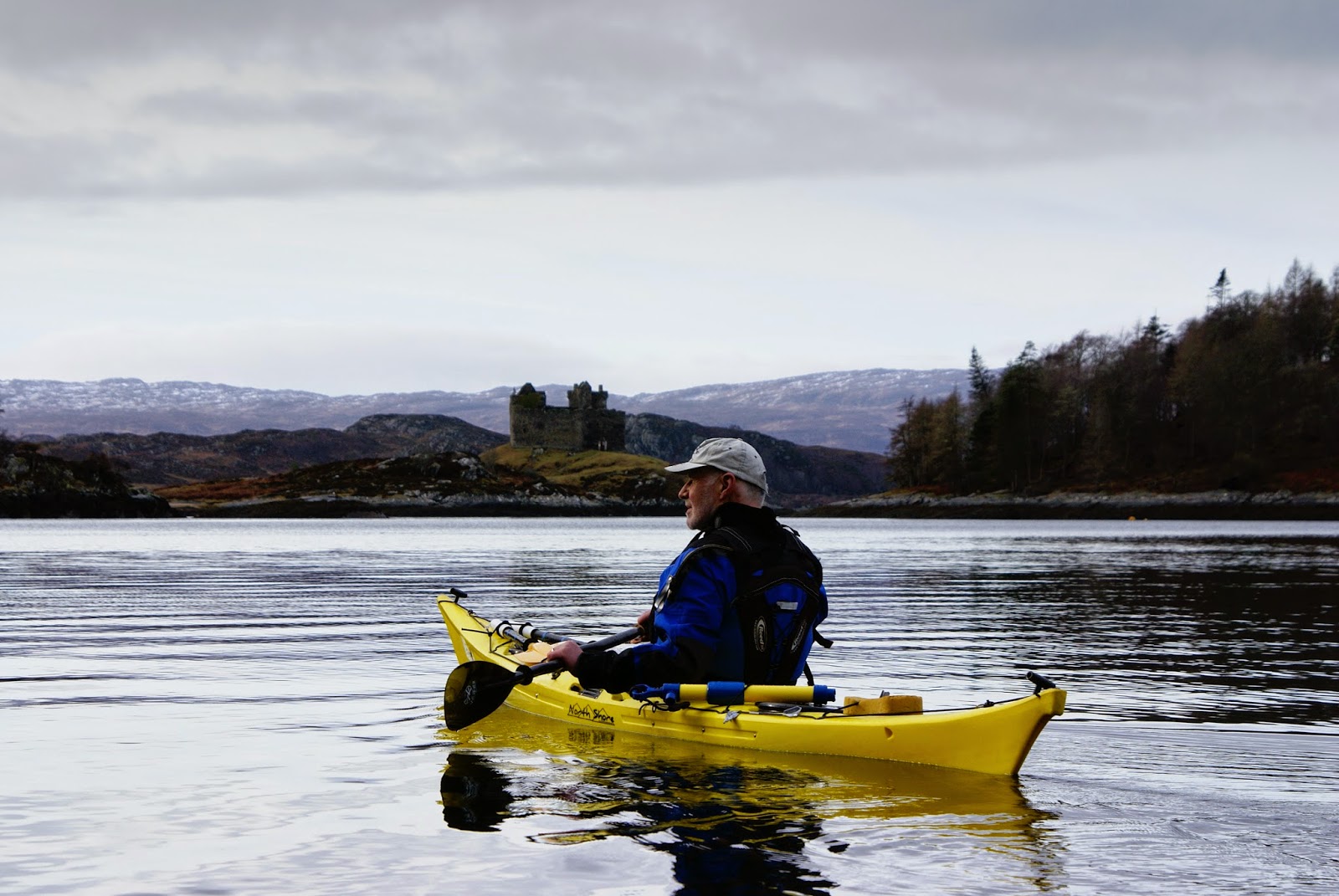 We enjoyed a very relaxed paddle around the central part of Loch Moidart, all the time-pressure of the north channel melted away and we were able to pause to absorb the wildlife and scenery in the loch.  With a virtual guarantee of seal sightings, otters and shorebirds aplenty and, particularly in winter, numerous wildfowl it's a stunning location - and then there's the history.... 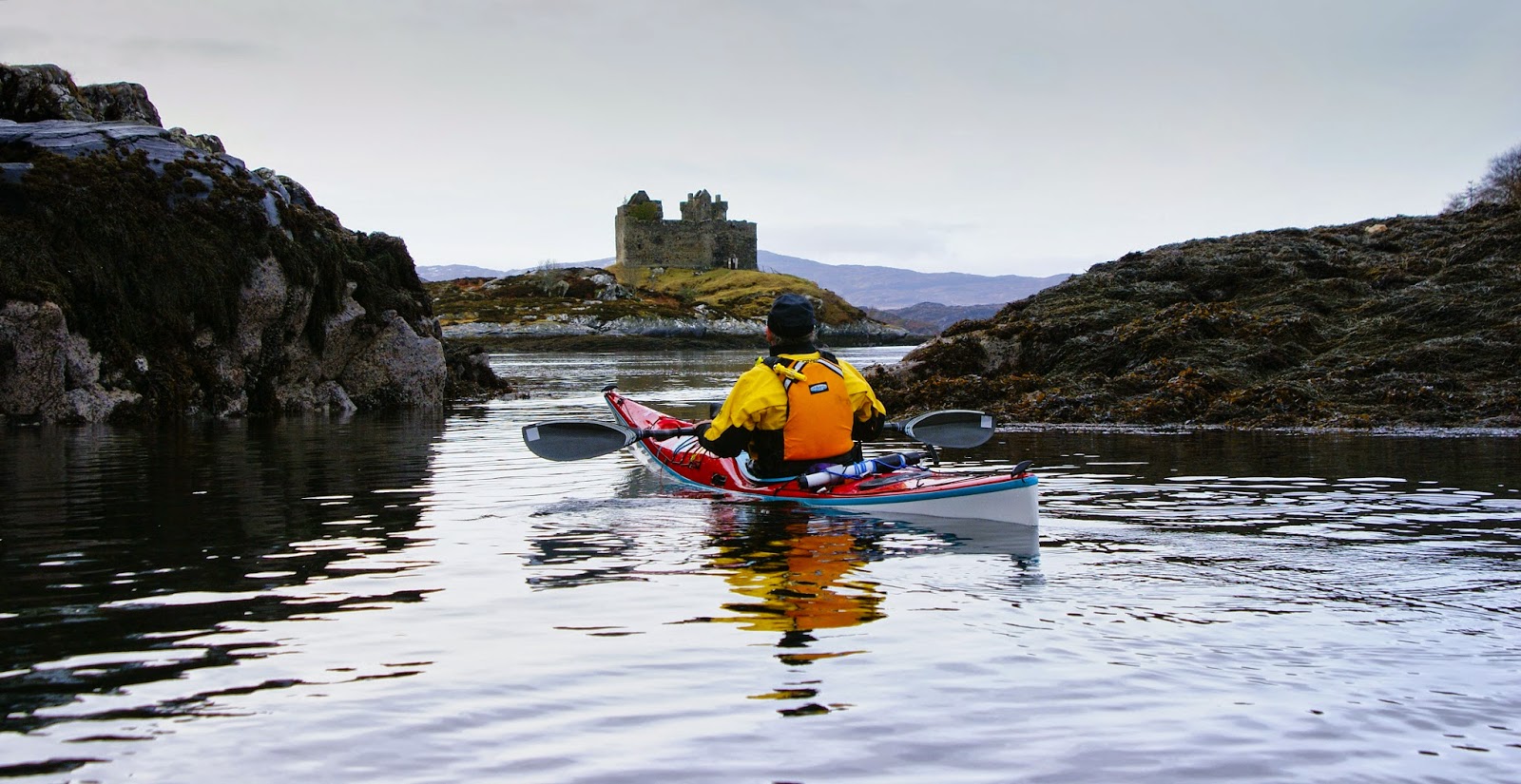 Passing between the islands and rocks along the shore brought us gradually closer to Castle Tioram, the dramatic and well-photographed 14th century stronghold of Clanranald.  It's an obvious spot to stop and enjoy first luncheon, especially since it's accessible by kayak at any stage of the tide but is cut off from the shore at higher states of the tidal cycle. 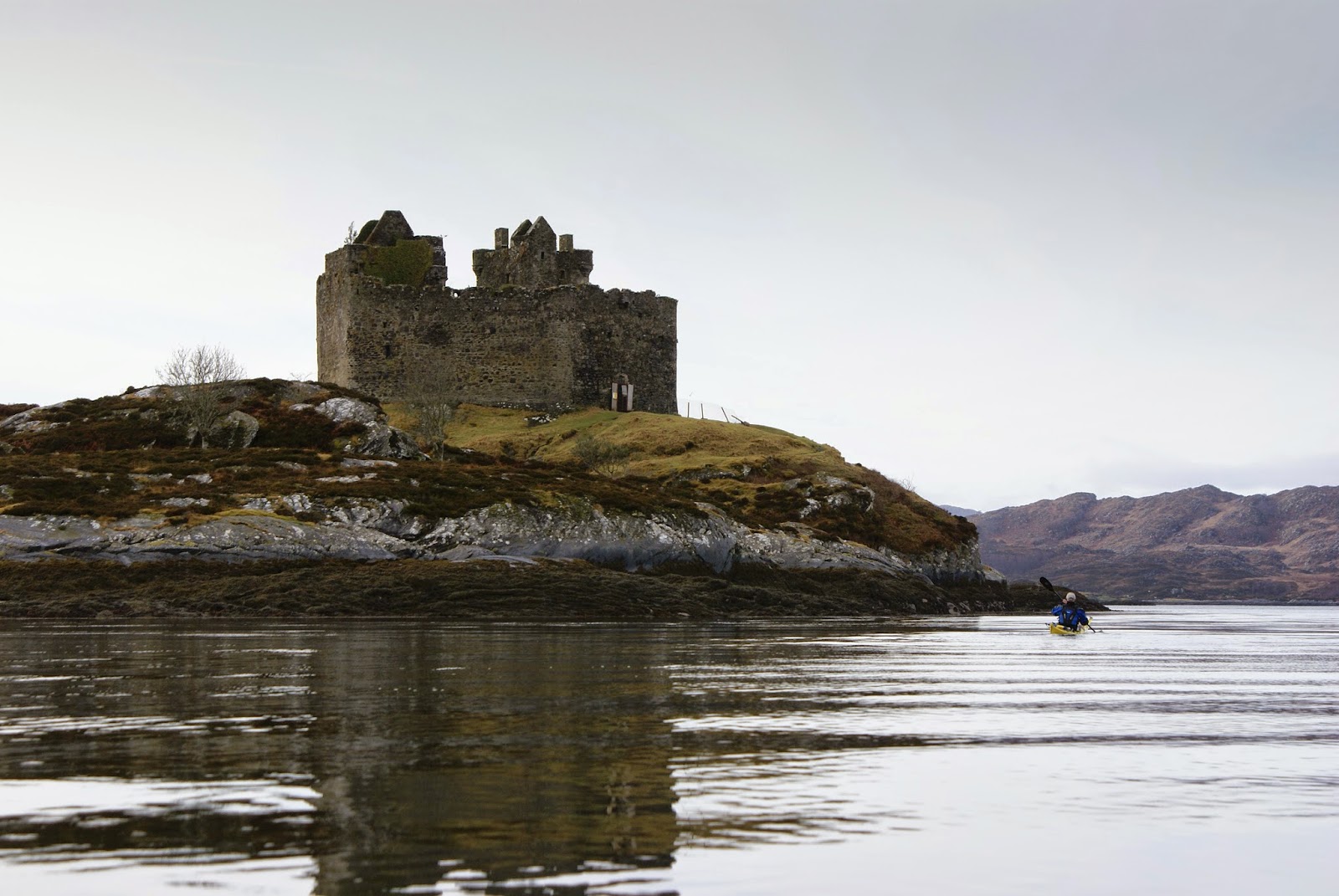 Clanranald can claim lineage back to Somerled and the Lordship of the Isles, once on a similar footing to the kings of Scotland.  Somerled's power was based squarely on control of the sea and his descendants rarely strayed from the formula though with varying success. We landed on a small white sand beach were once Birlinns would have beached. 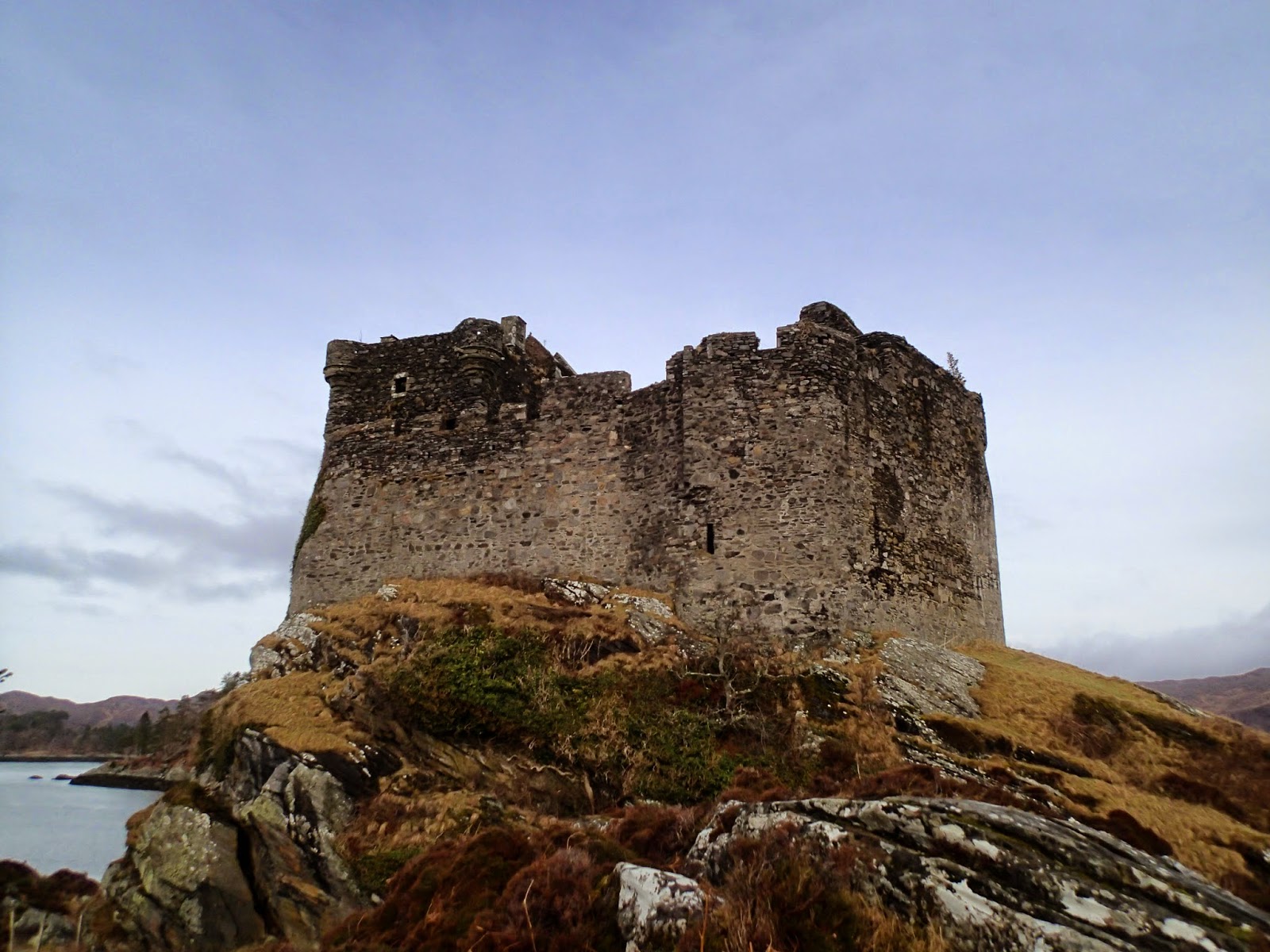 Parts of Castle Tioram have been fenced off or boarded up by the owner following a long dispute with Historic Scotland over the possible renovation of the building.  It seems for now that slow decay of the structure will be the outcome, which is a great pity.

We'd enjoyed a relaxed journey through the picture-perfect Loch Moidart in very calm conditions, the next part of our paddle would be quite different!