After a run of brilliantly clear sunny days, it was a surprise to wake up to a grey morning with banks of low cloud hanging just above sea level.  The forecast was for the cloud to lift gradually through the day and, hoping that this would prove correct, I set out to climb the highest hill in the Outer Hebrides, An Cliseam.

Most ascents are made from the A859 road immediately east of the hill, a straightforward "up and back".  This is the quickest and easiest way to climb An Cliseam, but misses out much of what's good about the hill.  I planned to do a full circuit taking in some of the outlying summits - and hopefully something of the view too. 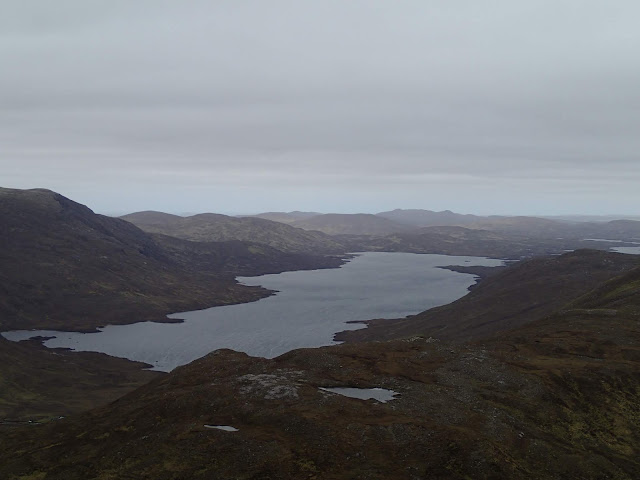 I started out up Glen Bhiogadail on a well made track to reach the Bealach na h-Uamha (col of the cave).  At the bealach a view opens up down Loch Langabhat and across the rugged country to the north. 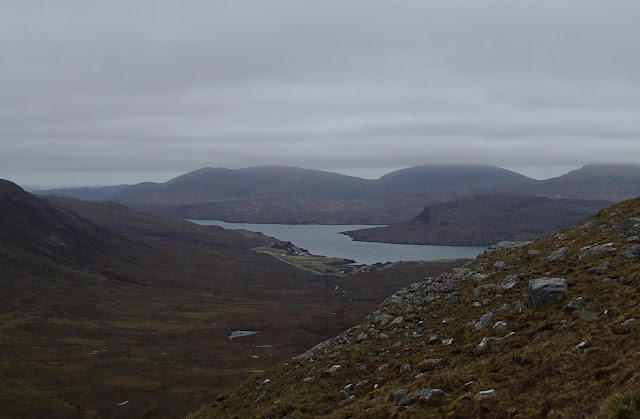 After crossing the rounded top of Mo Bhiogadail you're faced with a steep climb of some 300 metres to the summit of Mullach an Langa, the northernmost summit of the five which form the Cliseam horseshoe.  I was glad that the views were opening up a little on this climb - there was excuse to stop to look around!  Loch Seaforth is one of the most notable features of this part of Harris, cutting deep into the island. 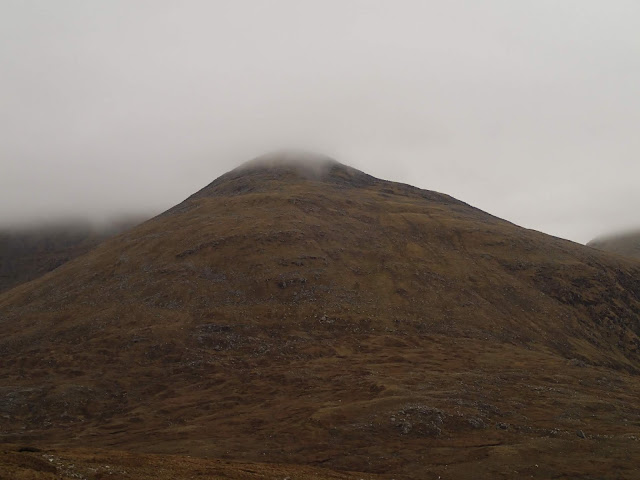 I was marking the cloud level by surrounding hills, and true to the forecast the clag seemed to be slowly lifting.  Across a dividing glen the 729m summit of Uisgneabhal Mor was almost clear - which I hoped would mean just the top of 799m An Cliseam would be in cloud. 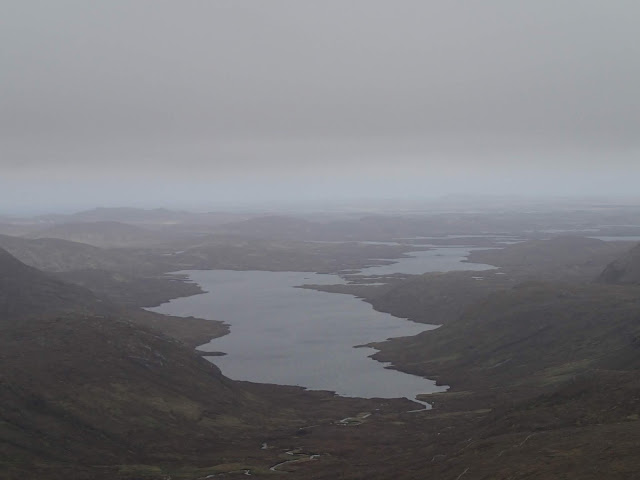 I eventually reached the base of the cloud just below the first of the narrow sections of the ridge, the 720m/2362ft top of Mullach Fo Tuath (the north roof), the cloud streaming in from the north on a cool breeze, quite a contrast to the previous days of heat. 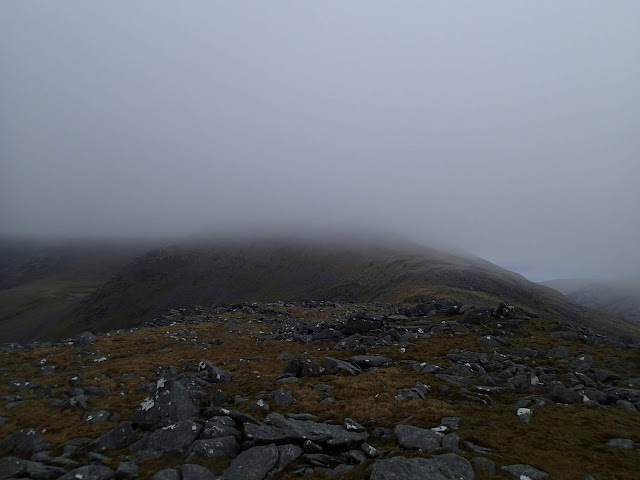 There's a great section of walking along Mullach Fo Tuath and the cloud was continuing to lift, giving at least a clear view ahead and simplifying navigation. 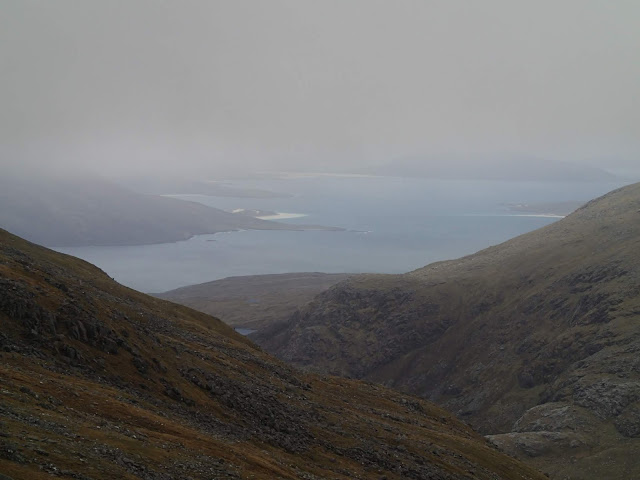 At last, there was a blink  of sunlight and a clearance to the south.  This is a famous view, looking down the Sound of Taransay over Luskentyre - having paddled and walked in this area it was nice to get an elevated perspective. 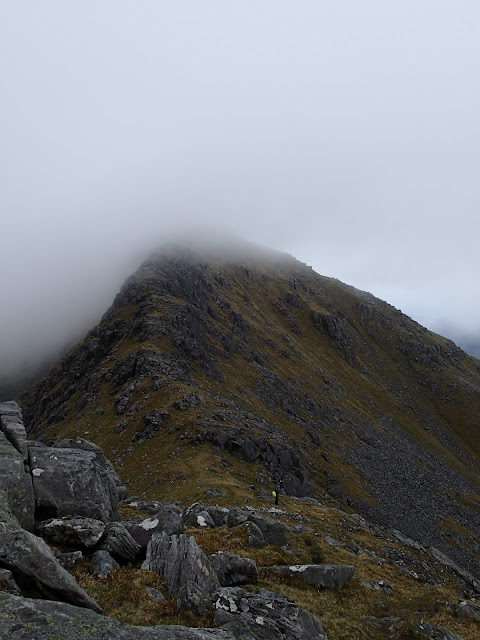 A sharp dip in the ridge leads to the most technical section of the route, the scramble up and over Mullach Fo Dheas (south roof).  A couple were traversing the bealach, the only folk I saw all day.  The climb up to the summit of this fine ridge is easy and pleasurable, though with a strong wind blowing across the hill some care needed to be taken.

The descent to the bealach (col) betwen Mullach Fo Deas and An Cliseam is altogether more tricky; a steep drop leads to a pitch of about 10 metres which, if taken direct, needs careful downclimbing. I opted for a flanking move to the north side of the ridge where a small scratch of a path slants down before contouring onto the bealach. This flanking path is steep, loose and a little exposed, needing careful movement. 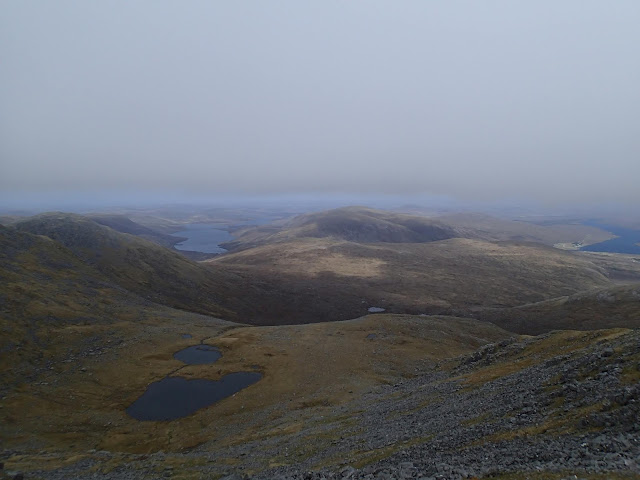 As I climbed the last rise onto An Cliseam the cloudbase had risen to just brush the summit.  The forecast had been absolutely correct and there was even some sunshine breaking through.  From muted tones and grey sky, colour was beginning to emerge. 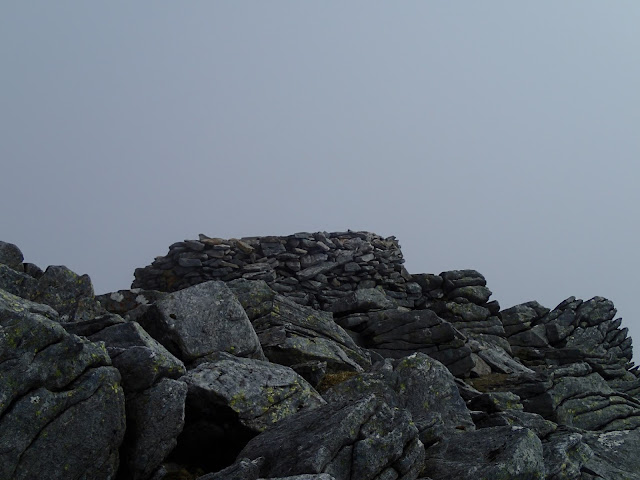 The summit of An Cliseam at 799m/2621ft is the highest point in the Outer Hebrides and the only Corbett .  While they may not be high, the hills of Harris are rugged, often pathless and generally tough going.  A circular wall enclosing the trig point gave shelter from the wind - a summit view was so close, but the cloud just failed to clear the top whilst I was there. 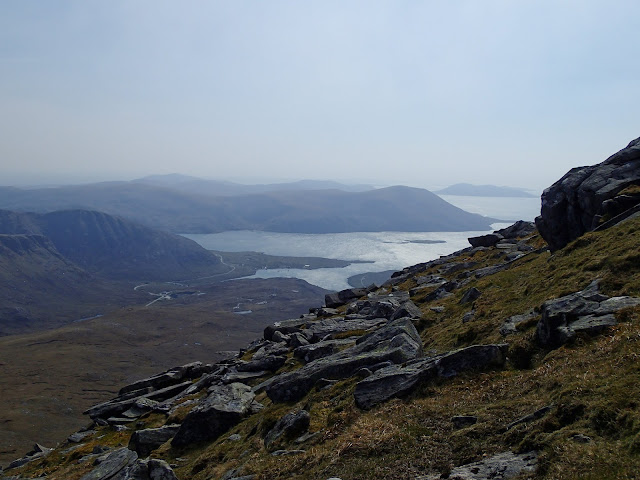 My descent route went initially south east down the "normal" ascent route, with some great views down towards Loch an Siar (West Loch) and the Tarbert road. 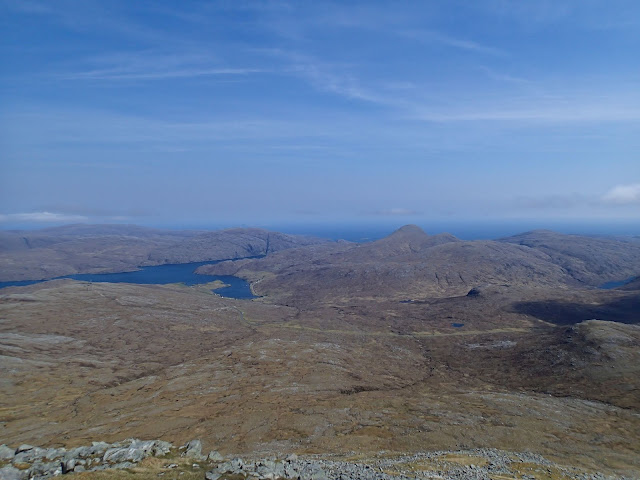 Where the steep ground eases, I cut back left under the north face of the hill to gain a broad bealach, then up onto the domed top of Tomnabhal, which had granite slabs very reminiscent of some Cairngorm hills.  My route back to our accommodation would take me across most of the ground in this image, to the shore of Loch Seaforth.  If it looks a long way off, that's because it was! 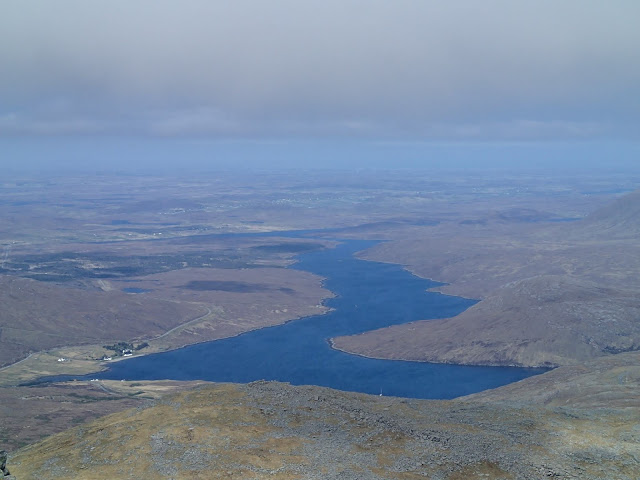 An hour or so later I crested a final rise and descended wearily down the Harris Walkway path to the road.  I'd been looking forward to making the final descent on a good path, but the track is very wet underfoot, and this was in a period of prolonged dry weather.

The final 3km of my walk was along the A859 road in weather which had turned from the grey of the morning into a hot early evening.  You really earn your hills in Harris; my route had been 18 km with well over 1400m of ascent and descent - which is a lot for one Corbett - but what a great day out. 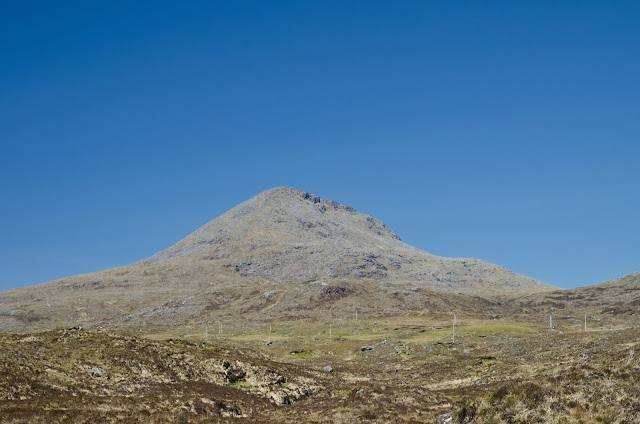 The following day, our last in Harris, dawned fine and we drove along the road to get this image of the hill rearing into a flawless blue sky.

We'd had a superb holiday in Harris and Lewis; my hopes of experiencing the stunning light quality had been amply fulfilled.  It has to be said we'd been fortunate with the weather; apart from a day and a half at the beginning, we'd enjoyed dry, fine conditions.  It's a place towhich we'll certainly return.
Posted by Ian Johnston at 21:48