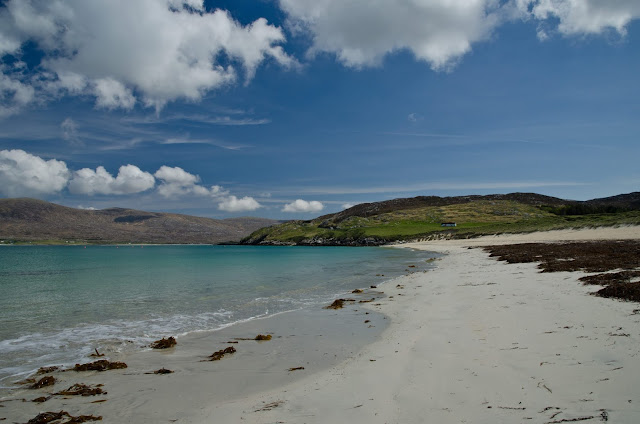 We took our picnic to Traigh Niosabost (also known as Horgabost), which of all the beaches we visited was by far our favourite and one we returned to several times.  A small campsite nestles in the machair behind the beach, it has a nice atmosphere and a stunning setting. 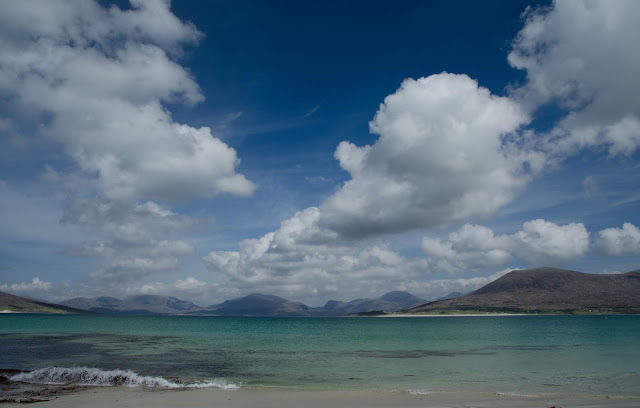 You can wake up to this view, and really, how could one tire of it?! 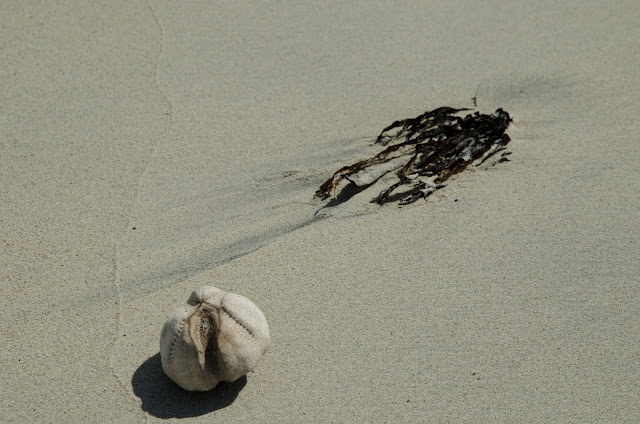 A crescent of pale sand, Niosabost faces the Caolas Tharasaigh (Sound of Taransay) and has the stunning colour so typical of this area.  A stroll along the strand gave plenty of interest, and we can report that despite the tropical appearance of the surroundings, the sea temperature was on the refreshing side of cool......

One of the places I'd hoped to visit whilst in Harris was the island of Taransay.  This was a holiday rather than a kayak trip, so my visit would be an acquaint rather than an exploration.  I carried my kayak down the beach and set out across the Caolas Tharasaigh. 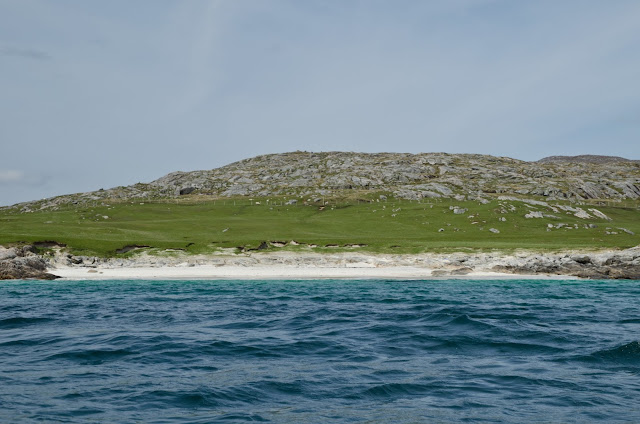 My aiming point was a white sand beach near the settlement of Paibeil, facing Niosabost. It's just 3km across the Sound and in calm weather a relaxing paddle.  In rougher conditions though, this stretch of water is a very different prospect.

Taransay has recorded habitation from 300AD, but was probably occupied much earlier than that.  The "ay" suffix is Norse and the name means "Taran's Island".  The most probable source of the the name is that the island was named for St Taran (the Irish St Ternan) who may have established a chapel here.  An alternative is set out by Abbot Adomnan of Iona who stated that Taran may have been a Pictish nobleman.

There were once three main settlements on the island; Raa, Uidh and Paibeil and two chapels at Paibeil, those of St Taran and St Keith.  Women were buried at St Taran and men at St Keith and a tradition stated that if this were reversed there would be a rising of the dead!  The outline of St Keith's chapel can still be seen but St Ternan's has been destroyed by coastal erosion.

In 1853 large rent increases reduced the population of the island, compounded in 1883 when the landlord forbade families to keep livestock, or to grow oats or barley.  Abandoned completely by 1942 then re-inhabited, in 1961 there was just one family remaining on the island and they departed in 1974.

On 1st January Taransay hit the news and television screens worldwide when the "Castaway 2000" series began.  Billed as a social experiment for the new millenium, the concept was that 36 men, women and children would occupy the island for a full year, tasked with building a community.  Arguably the start of the reality TV boom, the show had its controversies but was a rating success.  The "pods" used to house the participants were removed after the series and have been relocated to a number of west coast sites, including Port Mor on the island of Muck.

The island was sold in 2011 to the Kelliher family, who own a large pharmaceutical company and some pretty impressive holiday properties on Harris, and Taransay is now part of their Borve Lodge estate. 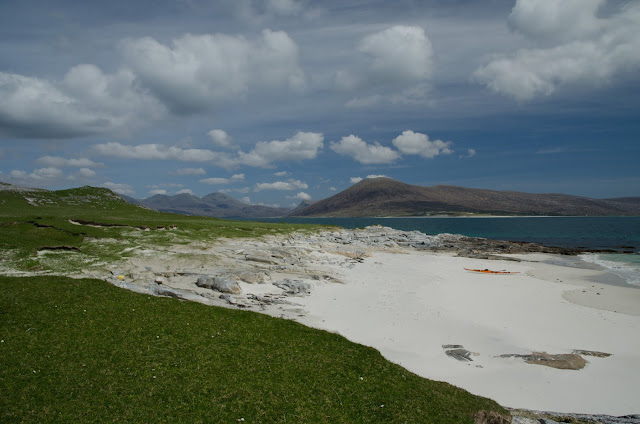 Approaching the beach, I was lulled into a relaxed state by the colours and the gentle swell.  A little too late, I realised that the beach was a little steeper than I'd expected and that the swell was actually surging up and across the shore.  I initially did OK in torquing hard on the paddle to avoid being broached or going into a "bongo slide" up the beach.  As the bow ploughed up the sand, the receding swell dropped the stern and I was still struggling to extricate myself from the cockpit when the next, bigger swell broke over the boat, twisted it, filled the cockpit with water and sand and put me off my feet.  Two more waves re-filled the cockpit as I used my hand pump as fast as I could trying to remove enough water to move the boat clear.

Not "Castaway", but I'd certainly been "cast up" on Taransay!  I took out handfuls of sand from the cockpit, and weeks later it was still emerging after every paddle.  My undignified arrival was witnessed only by some Red Deer and an irate Oystercatcher, and what a place to arrive! 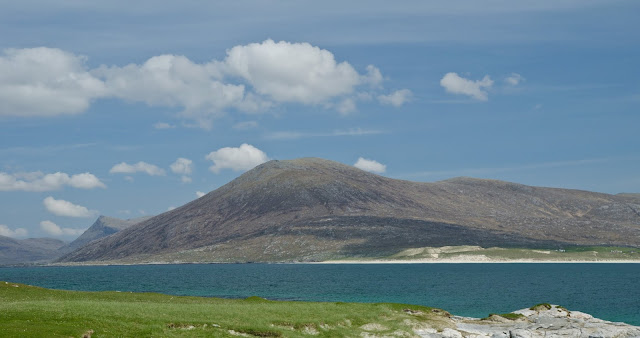 The view back across the Caolas Tharasaigh to Harris is sublime, grey hills above a turquoise sea, bounded by the dazzling white line of Luskentyre beach.  I decided straight away that the next time I come to Taransay it will be for a full exploration. 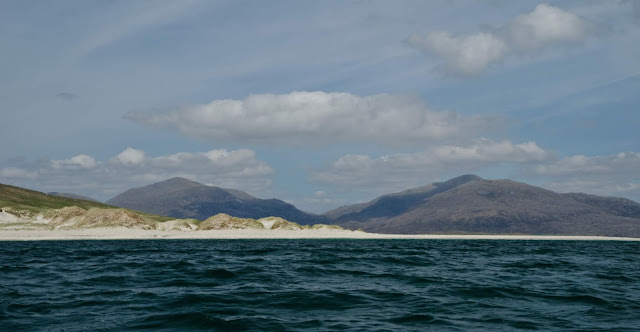 After a break to eat and to absorb the view and the place, I launched with a tiny bit more grace than I'd landed with; heading north towards the thin white line of the Corran Ra.  "Corran" in Gaelic conveys a meaning of something sharp, pointed or crescent shaped, and this remarkable spit certainly fits the bill. 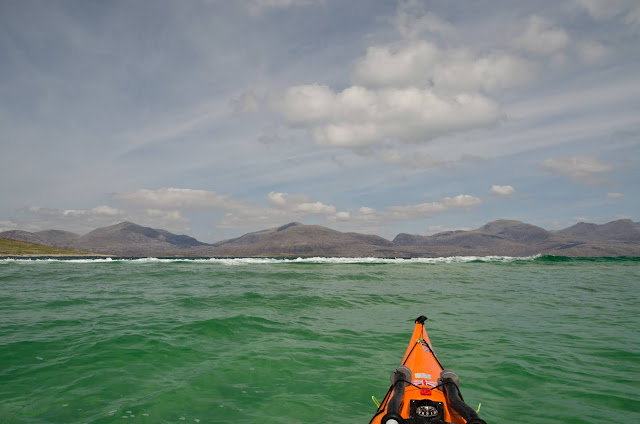 A feature of the Corran Ra is that it receives swells from both north and south; and when they meet the result can be very impressive.  On my approach the conditions and tidal state resulted in lots of surf and noise, but nothing threatening.  My friend Douglas has also experienced the fun which can be had here, but it's definitely a place to avoid in strong winds or a big swell.  On a subsequent windy day  the impact of the swells was both very visible and audible from Harris some 2km away and I estimated the height of the boomers to be over 6 metres..... 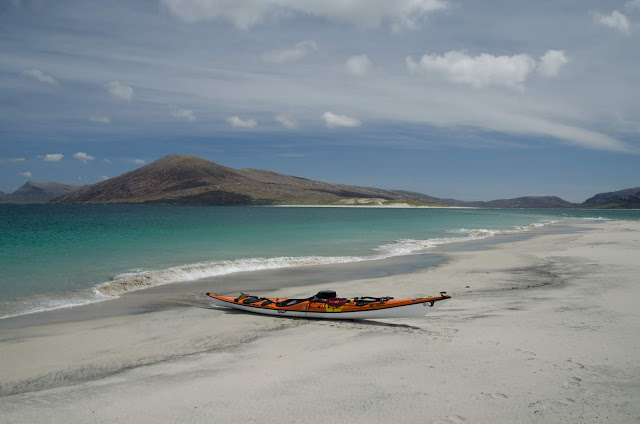 I'd intended to land at the inner end of the spit and walk out to the end, but on my approach it was clear that there was a colony of Little Terns nesting so I landed well away from them so as not to cause any disturbance.  Interestingly, another sand spit I've visited recently also had a colony of these uncommon and characterful birds on it, at Eilean Annraidh just off Iona. 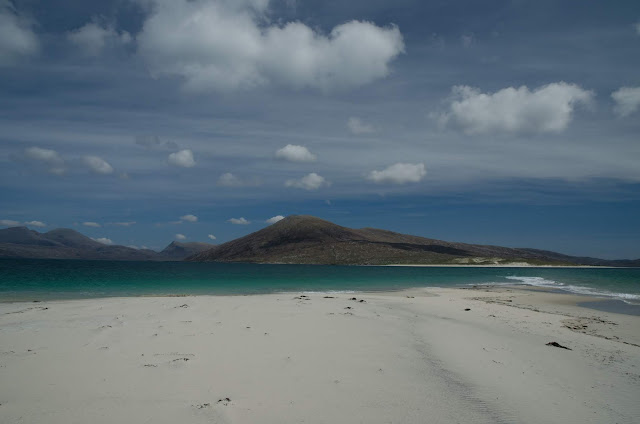 Once again, it was the intensity of light which so impressed, the colours a constant amazement.  I'd been so struck by this quality of light the previous time I'd visited Harris, and had been so excited to be returning but a little apprehensive that my memory wouldn't be matched on this visit....I needn't have worried!
Posted by Ian Johnston at 19:50