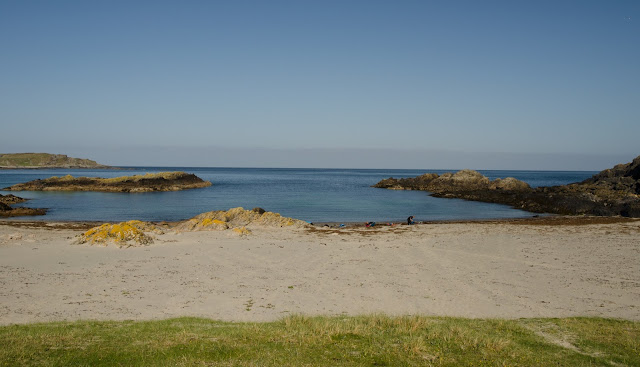 Our camp site at Kiloran Bay on Colonsay's west coast had been one of the best; and we woke to another calm and sunny day.  We packed our boats and carried them down to the water, then raked over the ashes of our fire which we'd made below the spring tide high water line. 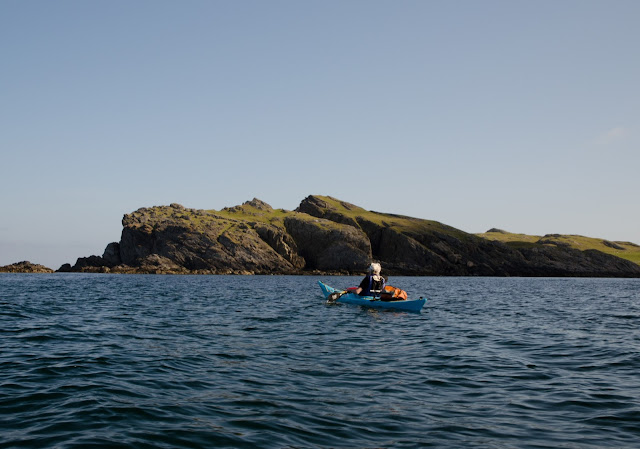 We set out heading north towards the tip of Colonsay, from where we'd head down the island's east coast.  We were hoping to see some of the Choughs which are resident here, but unfortunately didn't manage to see any of these scarce and charismatic members of the crow family. 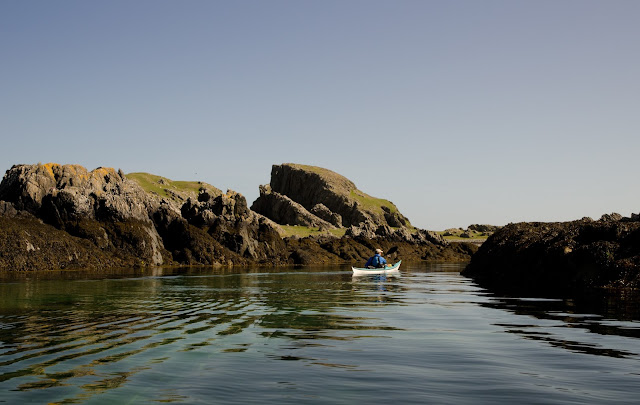 The north tip of Colonsay consists of a rocky headland linked to the rest of the island by a slender neck of ground which we wanted to explore for a potential future camping spot.  Finding the correct channel from the west side isn't as simple as it might seem from the map...... 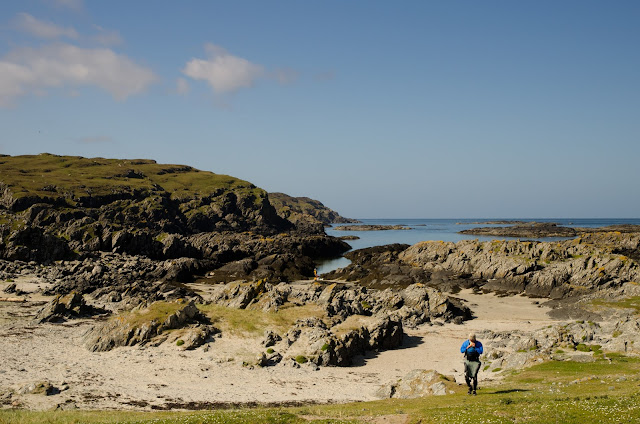 ...but it was well worth the effort.  Close cropped machair and a choice of landings both from the west and (slightly easier) the east, it would be a good place to stop on future trips.  Recce complete, we paddled around the headland and turned south - initially paddling past the eastern beach. 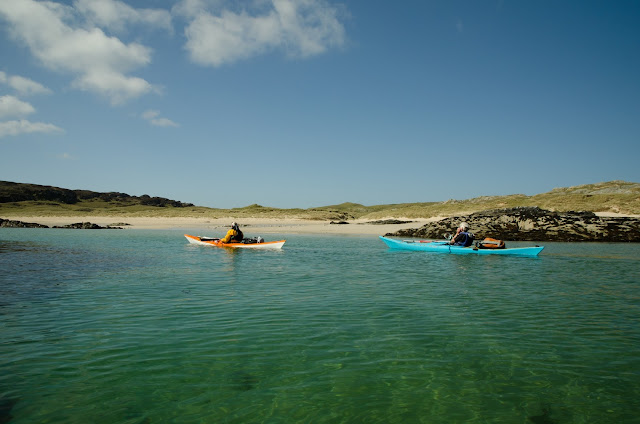 It was high time for a second breakfast stop....and we had somewhere in mind. Balnahard is a bay of emerald green water backed by golden sand was in full sunshine - just perfect! 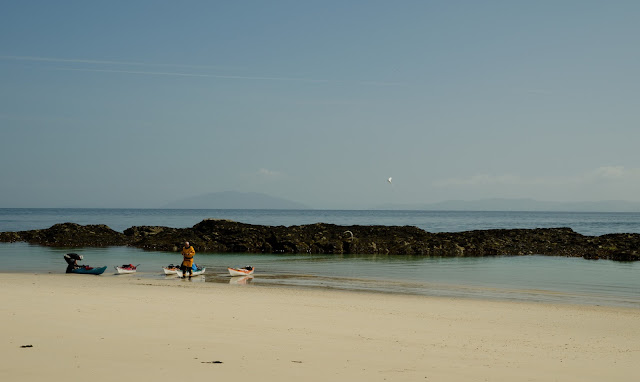 Away to the north lay the hills of Mull and the low outline of the Ross of Mull - itself a stunning sea kayaking location. 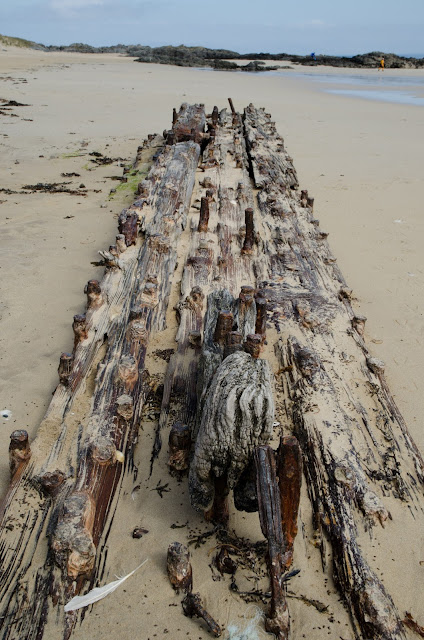 After second breakfast and coffee Douglas and I took a wander along the shore to check out the remains of SS Wasa, a Swedish ship of 1300 tons which was beached here on 24th May 1920 after having suffered a catastrophic fire whilst steaming about 8 miles west of the Dubh Heartach light.

The weather and  scavenging of the wreck for timber and iron have taken their toll, almost a century on there's little but the keel to be seen. 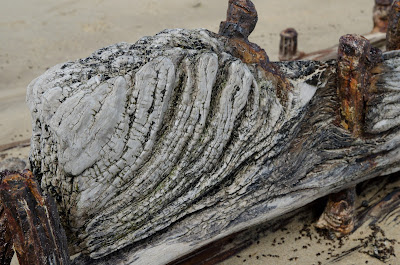 But even in the little that's left of the Wasa it's possible to see how her keel was constructed in oak and iron. 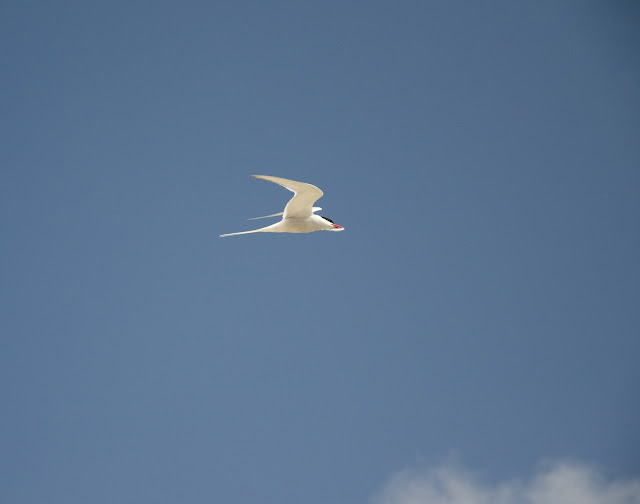 Whilst enjoying breakfast we'd been entertained by the display and aerobatics of one of the most remarkable migrants to visit Britain..... 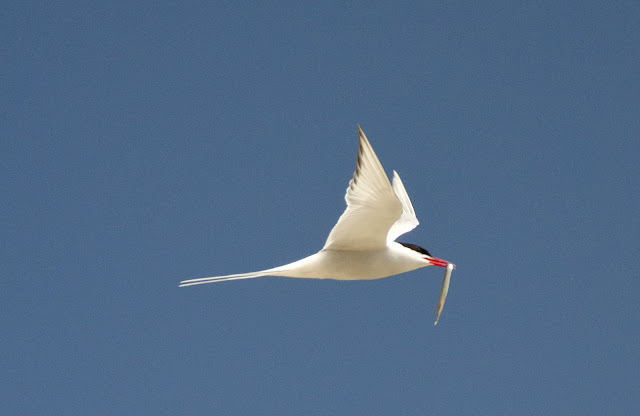 Arctic Terns (Sterna paradisea), dazzling white in the bright sunshine, were completing courtship with gifts of sandeels brought by the males and offered to their partners.  The chattering, bowing and aerobatic behaviour is fascinating....but that's not all.

At 25-40cm long and weighing just 85-125 grams, Arctic Terns aren't big or powerful birds.  Their flight is among the most buoyant and graceful in the avian world, their precision as they twist in mid air to snatch small fish from near the surface is a joy to watch.  These amazing birds winter in the Antarctic and breed in the Arctic and sub-Arctic coastal regions including Britain.

The shortest distance between the wintering and breeding grounds of Arctic Terns is around 12,000 miles (19,000 kilometres) - and these birds do the round trip every year of their lives.  An Arctic Tern nesting on the Farne Islands off England's north east coast in 2015 was fitted with a tiny satellite tracker.  The female bird headed south after a successful breeding season and flew down the west coast of Africa, around the Cape of Good Hope into the Indian Ocean to arrive in Antarctica in November 2015.  By the time it returned to the Farne Islands in the Spring of 2016 this individual had clocked up a total of 59,650 miles - equivalent to twice the circumference of the Earth and the longest verified migration journey of any bird.

Given that Arctic Terns live between 15 and 30 years, this means that these incredible long distance voyagers may travel 1.8 million miles (3 million kilometres) during their lifetimes.  The terns need to make these mammoth journeys as they need to find sandeels and small fish which are cyclic in the oceans.  They move with the season - birds in perpetual motion, under a perpetual summer sun...... 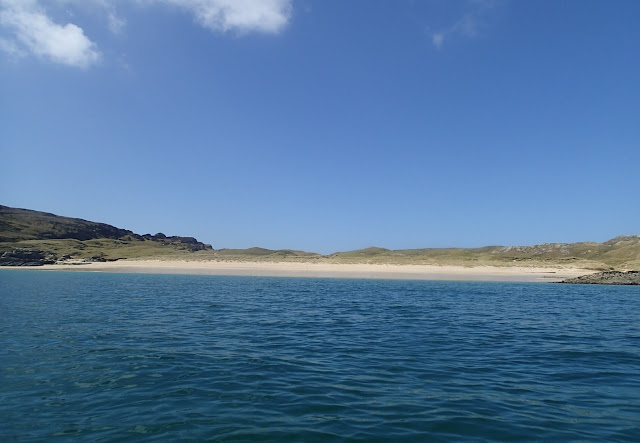 ...and given the weather and the stunning location - we felt as if we might be under a perpetual summer sun too!
Posted by Ian Johnston at 06:30