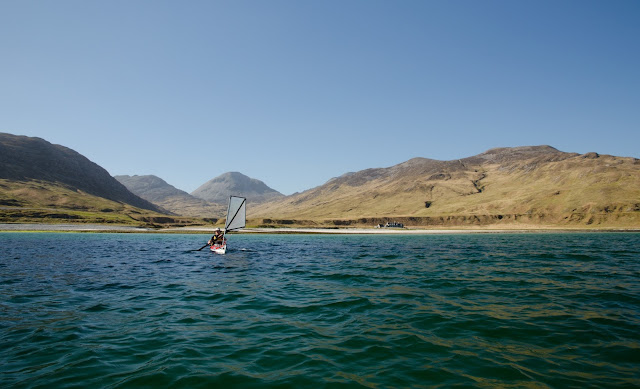 We woke at our camp on the Jura shore to a bright morning with a light ENE'ly breeze, just about  perfect weather for a crossing to Colonsay.  Our camp had been on the shore at the left of this image.  Glenbatrick Lodge is on the right, a property owned by Lord Astor and used as a summer house - it's the only real habitation on the entire west coast of Jura.  We kept well away from the house to respect the privacy of anyone staying there, and there's plenty of space to do that.  Up the glen, the iconic Paps of Jura make a striking backdrop.

The previous day had been a fairly long one.  We'd all had long journeys to get to the starting point at Carsaig and had then done a 25Km paddle with a portage across Jura.  A late finish had been rewarded though, we were in a great position to cross to Colonsay and to make our planned camp for the following night.

The first stage of our journey to Colonsay would take us to Rubha an't Sailein - the name is possibly point of the sea-inlet and it's sometimes named as Ruantallain.  We planned to take a leg stretch and a comfort break there prior to the crossing to Colonsay.

The north shore of Loch Tarbert has more splendid examples of raised beaches - once they're recognised as raised beaches the shape of the land during the ice age can be glimpsed. 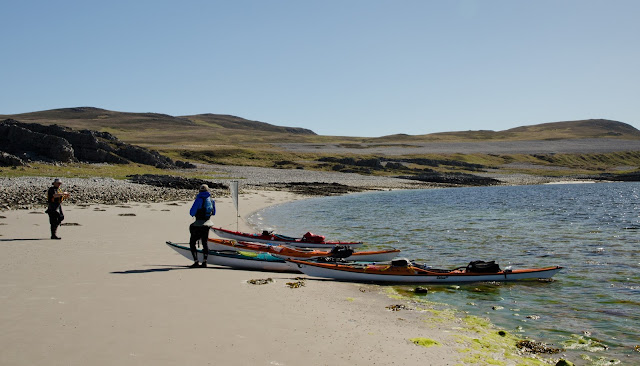 We landed at a sandy beach backed by grassy ground.  This had been considered as a camp site but Douglas was reluctant to camp here, on a previous occasion he'd seen many Adders.  Sam wandered up to take a look at the private bothy, and Maurice and I were following when, just above the beach, I glimpsed movement as I was about to put my foot down on a female Adder.....

The beautifully marked snake had curled into a defensive posture and I just managed to hop aside without standing on her. A relatively small Adder at about 30cm, she stayed stock-still for a few moments before darting into longer grass.  I'm not at all scared of snakes, but we decided not to venture further through the grass as there would likely be others warming up in the morning sunshine.  Adders are Britain's only venomous species of snake, and this was no place to be dealing with a painful bite! 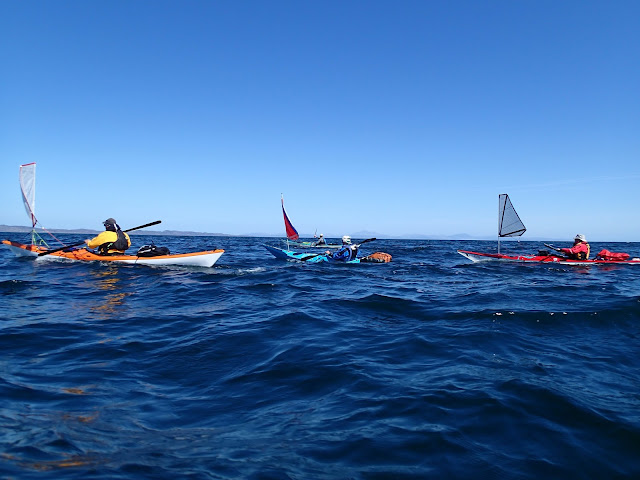 The crossing from Ruantallain to Oronsay, the tidal island at the south of Colonsay, is 15 km.  A breeze from across our right shoulders and low swell gave perfect kayak sailing conditions, and we enjoyed a great sail with spray bursting from our bows in the bright sunshine.

The sailing rigs meant that we completed the crossing in under two hours at an average speed approaching 8 Km/h, much quicker than if we'd paddled without the sails 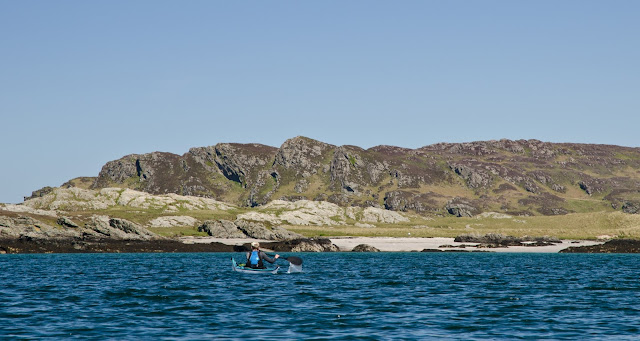 Sam doesn't (yet) have a sail, but with his youth and strength plus a background in marathon paddling he was able to stay with us.  As the breeze was fairly steady, we could drop our speed occasionally in order that we didn't get separated.

We headed straight for a prominent white sand beach, seen from right at the start of the crossing, and gradually it gained detail as we approached.  We were soon in turquoise water with white sand visible beneath the boats....... 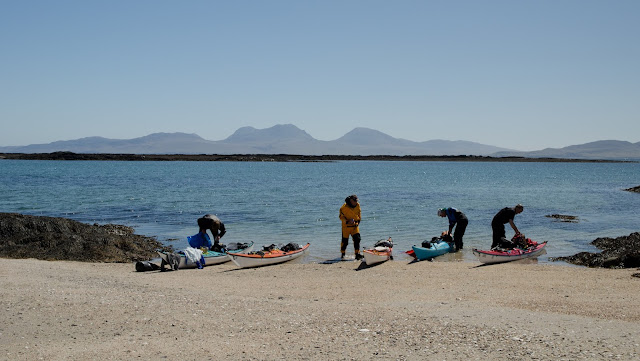 ....pulling around a reef we made first landfall on Oronsay.  We had arrived!  Sea kayaking to a new island is always a special thrill for me, and these islands have been high on my "must do" list for some time.  We found a spot out of the breeze with a view back to the Jura skyline and enjoyed a leisurely luncheon in the warm sun. 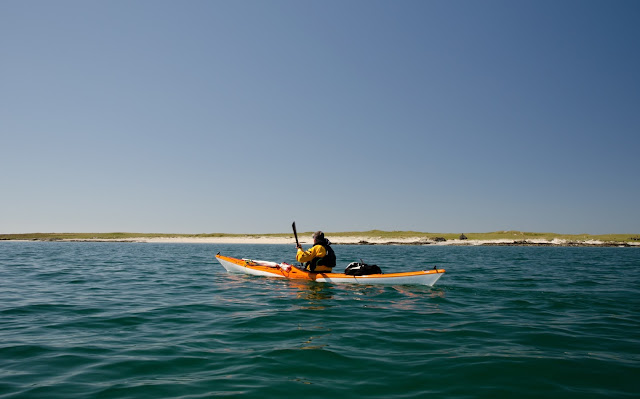 The tide was approaching low water and it was nearly Springs - there was no possibility of paddling between Oronsay and Colonsay as the channel dries to reveal a large expanse of sand.  Besides, the paddle around Oronsay promised to be great.

The east side of the island is largely white sand beach backed by machair - stunning in the bright sunshine. 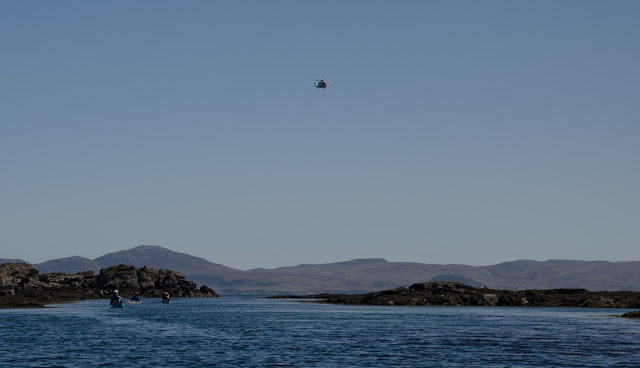 At the south of the island we were able to pick our way through a series of rocky channels to gain the west coast.  A deep thrumming noise from astern proved to be a Coastguard helicopter overflying the island. 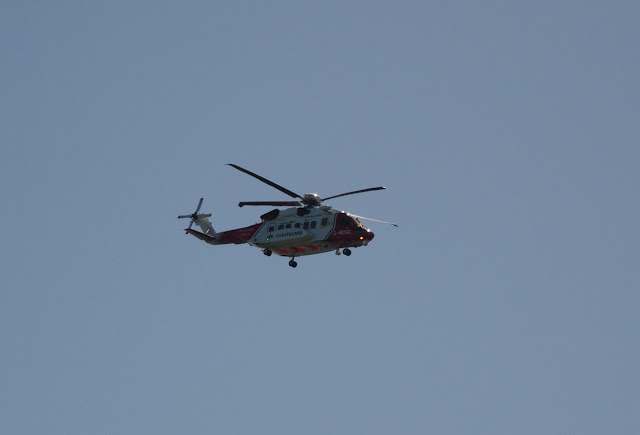 "G-MCGG" is a Sikorsky S-92 operated by Bristow's on behalf of HM Coastguard, operating from Prestwick in Ayrshire.  With a crew of four and an endurance of over four hours, it's an impressive aircraft.  I reflected that in the worst case, if I'd not avoided that Adder I might have required to be a passenger in her rather than a spectator as she flew over!
Posted by Ian Johnston at 07:00