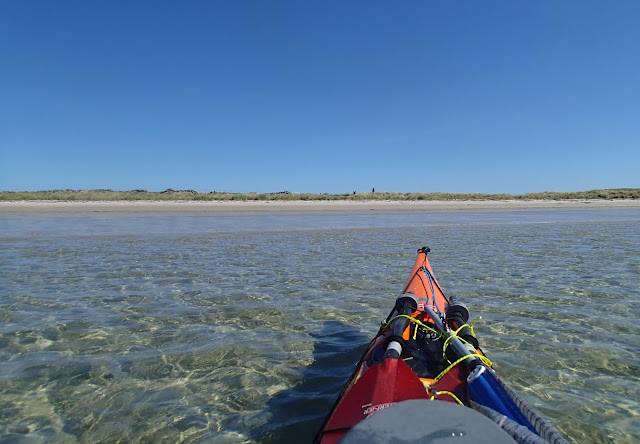 We rounded the south tip of Oronsay and entered the long, narrow bay of Port na Luinge which has a beautiful sandy beach at its head.  The name translates as "Port of the ships", and it is wonderfully sheltered with a gentle slope on which craft could be beached.

As our own keels touched the beach, a figure with two dogs appeared on the machair and walked down onto the beach - it was the warden/farmer who must have seen us paddling into the bay and probably wanted to check out what we were doing.  Oronsay is owned by Mrs Colburn, an American lady, who has a management agreement with the RSPB.  Visitors to the reserve aren't discouraged by the RSPB, but then again neither are they encouraged - their focus is on managing the island for birds.  Access is of course allowed under the Land Reform Act, and the warden was probably wishing to ensure we didn't intend camping.  We chatted for a while about the island and the Corncrakes for which the island's agriculture is managed (there are five calling males this season, though unfortunately we didn't hear them during our visit).  In order to assist these birds the grass is cut late at the old, traditional time - and unusually the farmer counts nettles as one of his main "crops" because the Corncrakes like to hide in the dense patches. 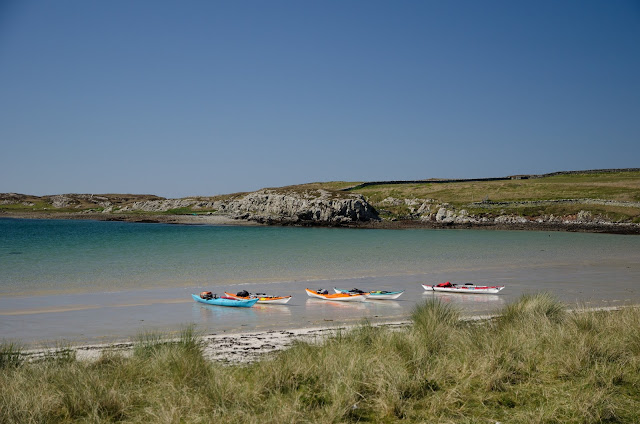 Port na Luinge really is a most beautiful spot.  We followed the path up above the beach........... 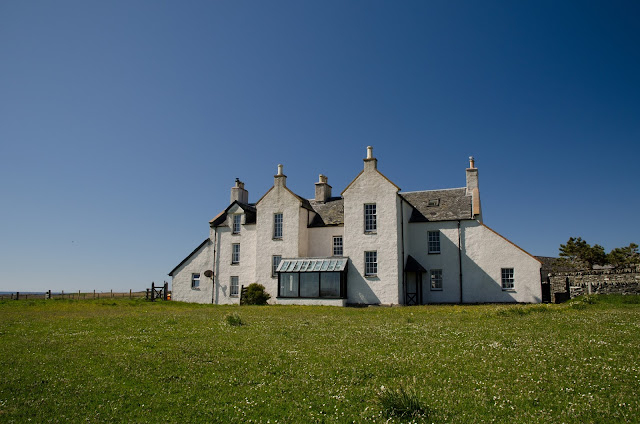 ....past the wonderfully situated and very handsome Oronsay House........ 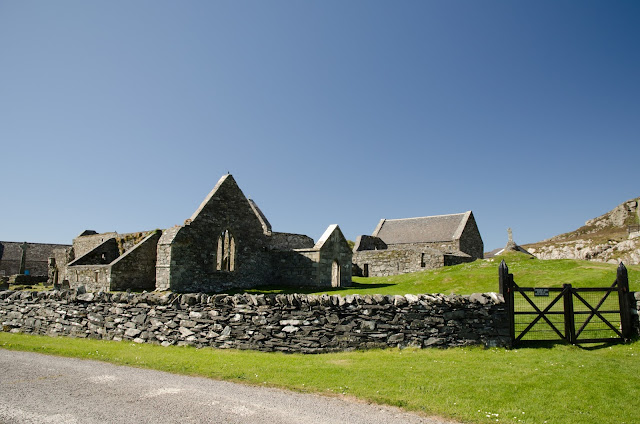 ...to the place we'd landed to explore - Oronsay Priory. There are several traditions attributed to the original Celtic monastery which occupied this site - that Columba established a church here in the sixth century, or that St Oran founded a priory on the site in 563, giving the island its name.  Actually the name probably comes from the Norse term for a tidal island and there are a few islands so named along the western seaboard.  Given that there are numerous sites from the Neolithic period on Oronsay and Colonsay, it may be that the first Christian site itself overlaid or subsumed a place of significance or worship.

It seems probable at least that some form of religious site predated the building of what can be seen today - an Augustinian priory endowed (possibly) by John, Lord of the Isles, in the 14th century. 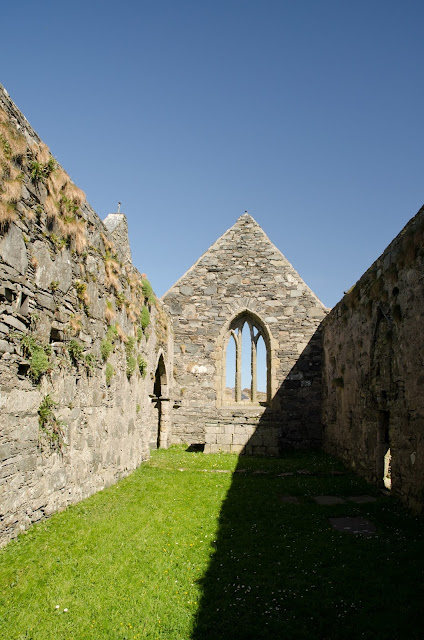 The ground plan is slightly unusual in that the monastic and domestic buildings lay to the north of the simple rectangular church. 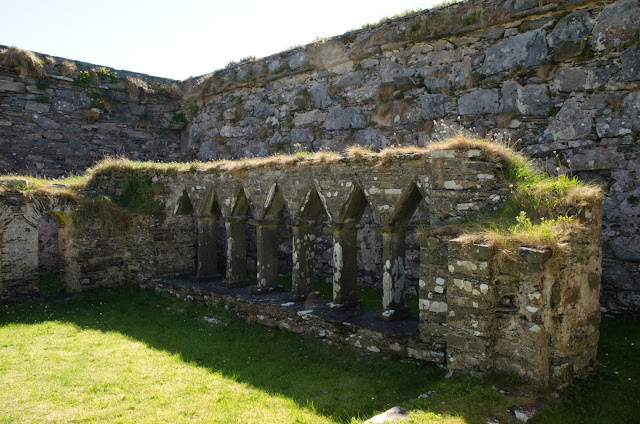 On the eastern side of the site is a cloister yard with two types of arcading - this angular type and the older, rounded type seen at the left of this image.  This probably indicates restoration of the site at some point. 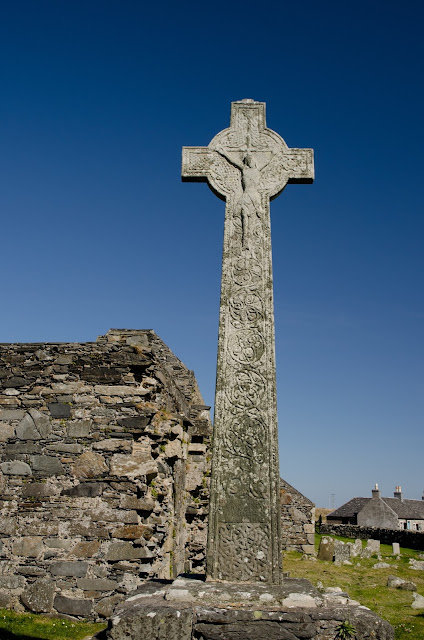 Three crosses are associated with Oronsay Priory, the most striking of them is this one at the SW end of the church.  A tall "Celtic" cross bearing a cruxifiction scene and ornate interlacing pattern, it bears an inscription which identifies it as the cross of Prior Colin who died in 1510.

A simple stone cross is said to have stood on the Strand, the area of sand and mud between Oronsay and Colonsay.  This was a "sanctuary cross", which denoted the bounds of the Priory and offered protection from the law to fugitives who could reach it.

Colonsay and Oronsay were MacNeill lands - the clan were Norse-Gaels, the name being related to the Scandinavian Neilsen or Nilsson.  A family mausoleum and many MacNeill graves testify to the family's long association with the island and the priory. 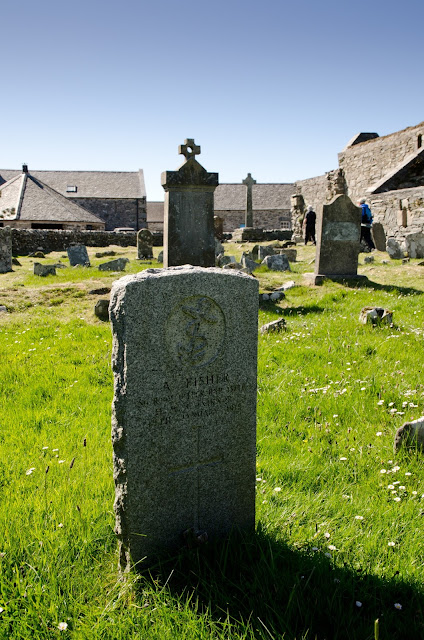 Two war graves, one from each of the two World Wars are located in the churchyard, erected by the Commonwealth War Graves Commission. The first is of Engine Room Artificer A. Fisher of the Royal Naval Reserve who was lost in the sinking of HMS Viknor, a 5386 ton former Blue Star steamship requisitioned by the Admiralty as an Armed Merchant Cruiser.

HMS Viknor was lost in heavy weather off Tory Island on 13th January 1915, and was believed to have struck a mine.  All 291 of her crew plus seven other men were lost, with some bodies later being washed up on the Irish and Scottish coasts; the body of ERA Fisher was found on Oronsay and buried at the churchyard. 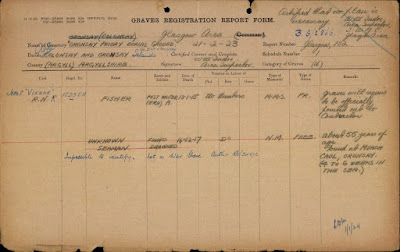 
It's testament to the work of the CWGC that the grave registration document still exists...... 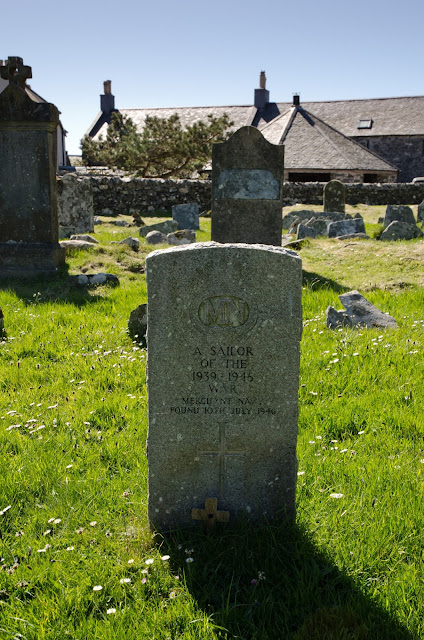 No personal records exist for the other war grave, that of an unidentified Merchant Navy sailor who was washed up on 10th July 1946 - some time after the end of hostilities in European waters.  Each grave administered by the War Graves Commission bears, wherever possible, either a regimental or organisational emblem - in this case that of the Merchant Navy.  At the base of the grave stone there's the simple inscription "Known unto God".

We missed out on visiting the many mediaeval grave-slabs displayed within a roofed building at the priory - reason enough to visit this special place again in the future. 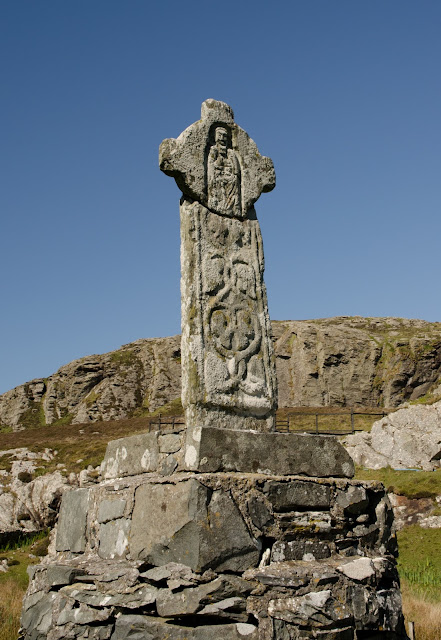 The last of the three crosses associated with Oronsay is the oldest.  A broken cross base and head are clamped together on a stone plinth - though the two parts may not necessarily be from the same cross.  Simple interlacing on the shaft surmounted by a smiling figure, the cross is marvellously situated...... 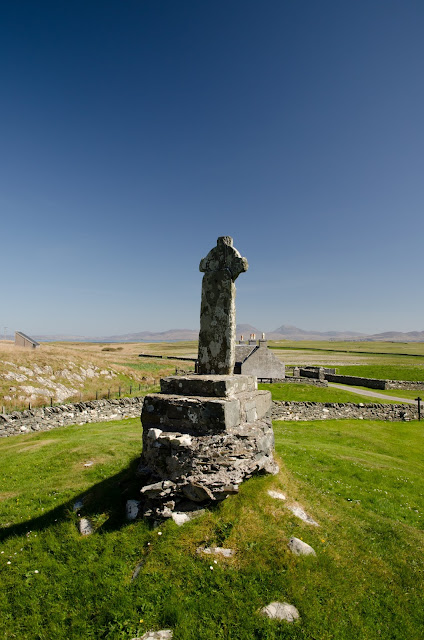 ....looking out over the machair of Oronsay to the distinctive Paps across the Sound of Jura.

There's a sense of peace and great continuity here, similar to other sites with long religious tradition.  Whether you're a Christian, religious or not, this is a special and precious place - I think we all felt calmed and a little humbled by our visit.
Posted by Ian Johnston at 07:00