Continuing our journey north, we took a last look back at the long sandy beaches of Oronsay.  We had a camp site in mind a good up the west coast of Colonsay and still had some distance to travel. 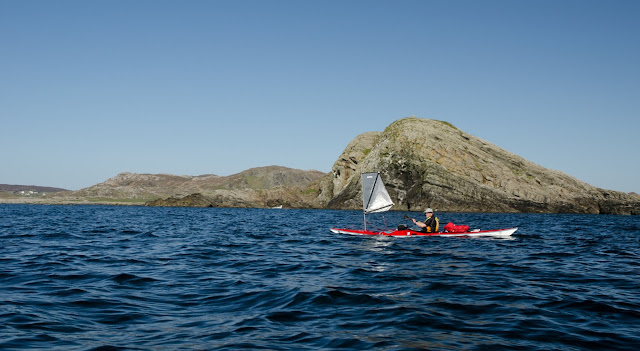 Colonsay isn't a high island but it is quite rugged, especially on the west coast.  Rocky headlands between sandy bays slipped astern as we made steady progress in superb conditions. 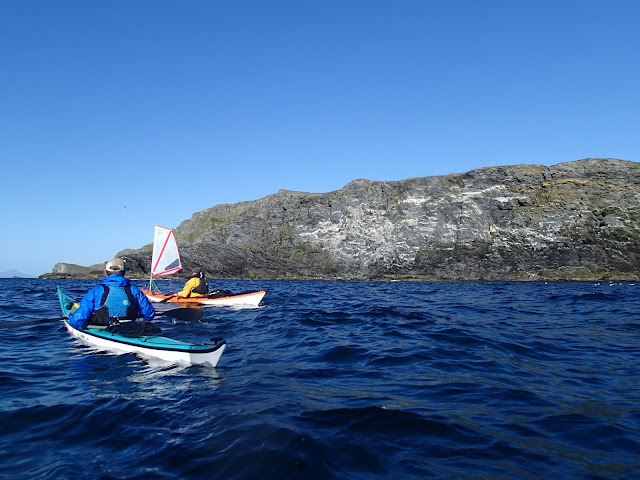 From Port Mor northwards the scenery becomes wilder, more rugged and has a real "out on the edge" atmosphere.  We counted ourselves very fortunate to be able to paddle relatively close in to the cliffs, despite the near perfect conditions there was a good deal of clapotis from the cliffs and many of my photographs from this section were spoiled by water splashes on the camera lens. 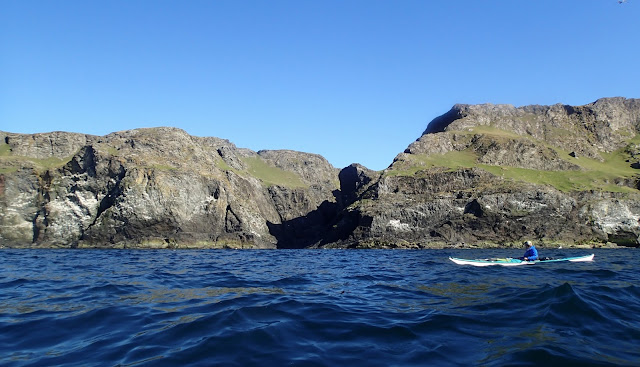 Having only previously seen the sheltered and lower lying east coast of Colonsay, I was pleasantly surprised by the height and rugged nature of the cliffs on the west side of the island - chasms and scarp slopes broke the sheer cliffs in places and we paddled through rafts of Guillemots, Razorbills and Puffins with wheeling Fulmars and Kittiwakes filling the sky above us.  The grassy slopes falling to sheer cliffs have something of the feel of Hirta in the St Kilda group; though not as grand or high they share much of the same character and wild atmosphere. 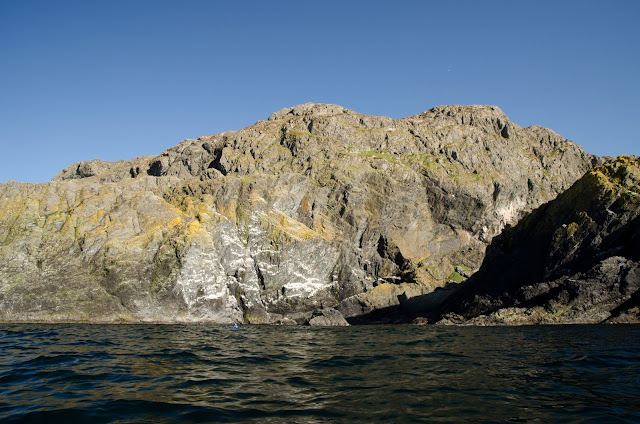 There's a definite sense of scale here too - Sam's kayak is dwarfed by the rock architecture in this image. 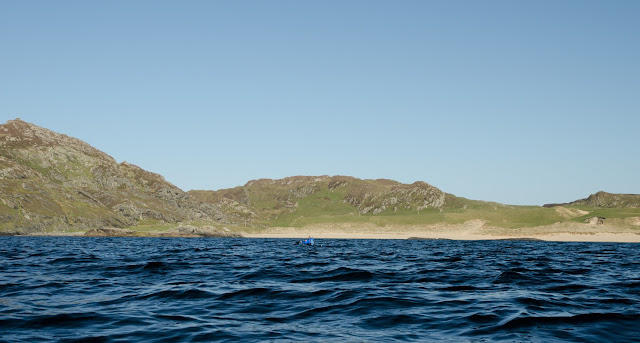 We'd enjoyed a long day of sea kayaking and exploring, and superb though the situation was, I for one was happy to turn a final headland and head into Kiloran Bay where we planned to camp. 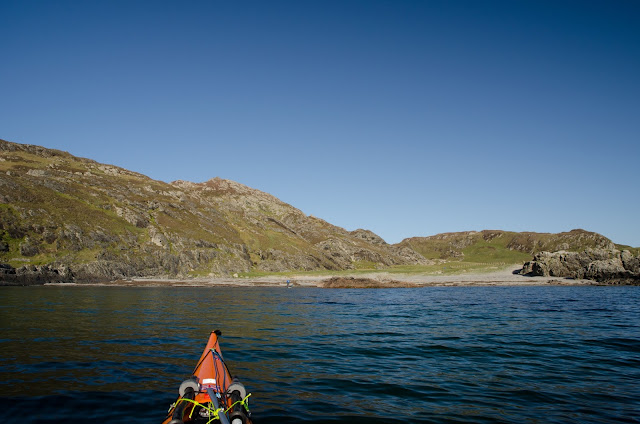 Rather than the main beach, we chose a smaller bay tucked into a corner at the north of the bay, which was catching the evening sun and offered a good landing.  In heavy swell I doubt that any of the beaches on this west coast would be tenable for a landing, but no such problem on this evening - we landed in the slightest of wavelets. 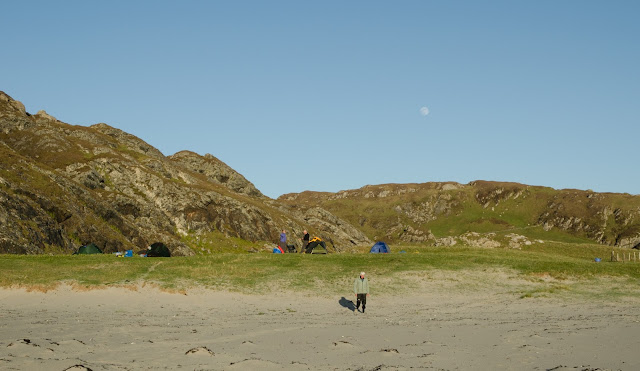 Camps was soon established on a stretch of level, cropped machair above the shore.  David took a few moments to just lie on the grass and relax before putting up his tent; given that he's well into his eighth decade and we'd just completed 41 kilometres of paddling I think you'll agree at this was entirely understandable!  The good Doctor prescribed a well-known brand of iron-rich sports recovery drink for David, which had a most satisfactory restorative effect...... 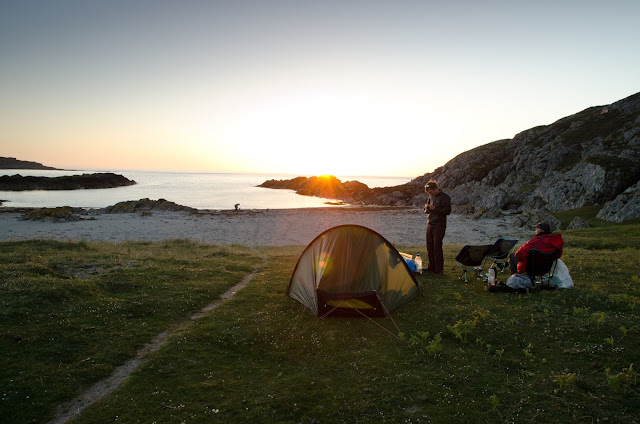 This was a really great campsite, on good ground facing the sunset above a white sand beach - does it get any better? 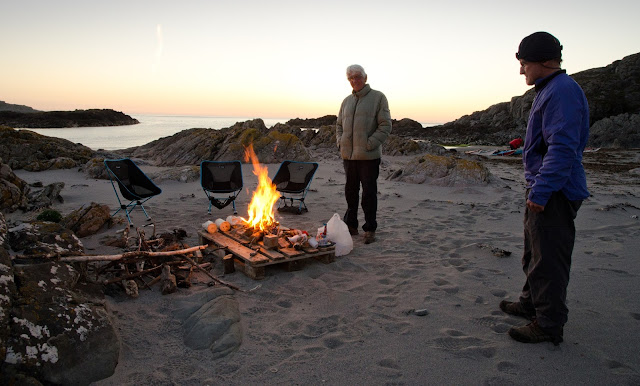 Well, yes it did; there's nothing like a good camp fire.....  We'd not lit a fire the previous evening as we were so late off the water so we had several pieces of firewood stowed in spare spaces in our boats and there was plenty of driftwood to be found.  A washed-up heavy pallet was too strong to be easily broken up but made a great base for our fire.  We got things started early and let the fire build up embers for cooking supper later in the evening. 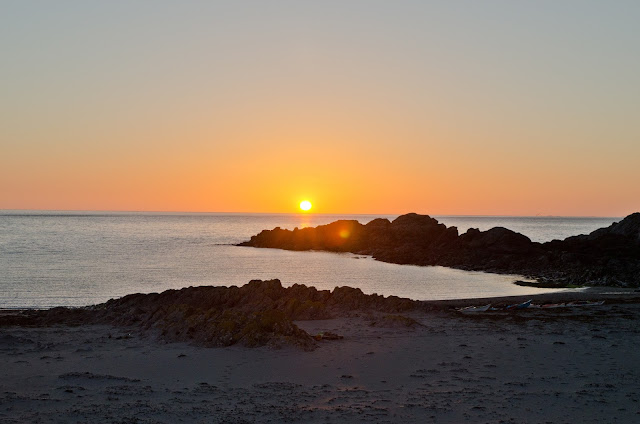 Dinner eaten and camp chores done, we relaxed with a sports recovery drink and watched as the sun dipped towards the horizon - it would be another fantastic sunset. 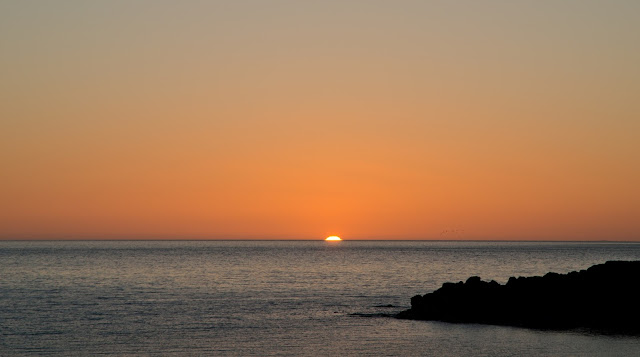 A sunset in the Hebrides is an event one can participate in rather than merely watch.  We increased our level of participation by saluting the close of the day with a dram while reflecting that beyond the western horizon there was no landfall until the coast of Canada....in this wonderful spot we really were out on the edge, not just of Scotland but of Europe . 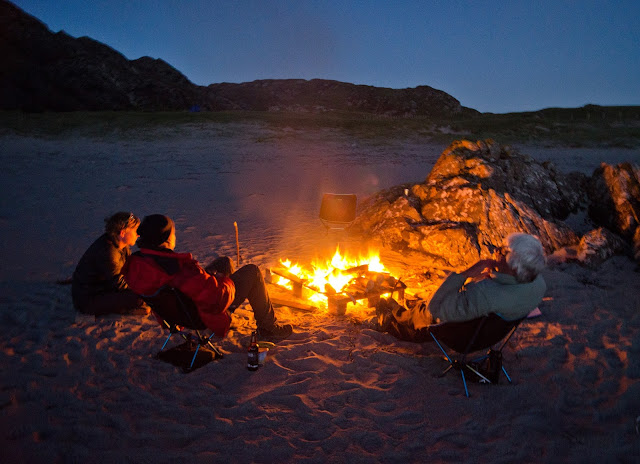 A most convivial evening was spent around our fire; we sat long into the Hebridean twilight chatting and swapping stories.  Baked potatoes were cooked in the embers as well as a new treat - baked Bramley apples served with clotted cream.  There can have been few more contented groups of folk than we five on this evening......
Posted by Ian Johnston at 18:17