Moonlighting on the Correen hills

"The most difficult expedition to achieve on mountains in this country is a moonlight climb in winter.
Not that the difficulties are technical.  A full moon among snow-mountains will normally provide
visibility of twenty-five miles - if the sky be clear.
And that is the root of the problem : to combine leisure with a full moon, a hard frost, and a clear sky.
Success needs patience, long and persistent patience."

The night climb Bill Murray went on to describe was a traverse of Glencoe's Aonach Eagach  in 1947 on a night when the moon lit the way and the climb was enhanced by a display of the Aurora Borealis.  He and Donald McIntyre finished the climb and waited to watch the dawn before descending.  It's a truly inspirational chapter in one of the two works of mountaineering literature which have most inpired me - the other is also by W.H. Murray - his unsurpassed work "Mountaineering in Scotland" which was written whilst a prisoner of war.
I've been lucky enough to be able to combine all the right conditions twice, once in England's Lake District on an icy round of the Kentmere hills and once on a climb of Lochnagar.  The opportunities are rare and fleeting - hesitate and they're gone.

3rd February 2015 was a full moon.  It had snowed heavily during the day and frequent snow showers fell into the evening, the sky more overcast than clear.  Then, after 10pm when I was just going to bed I took a last look outside..... 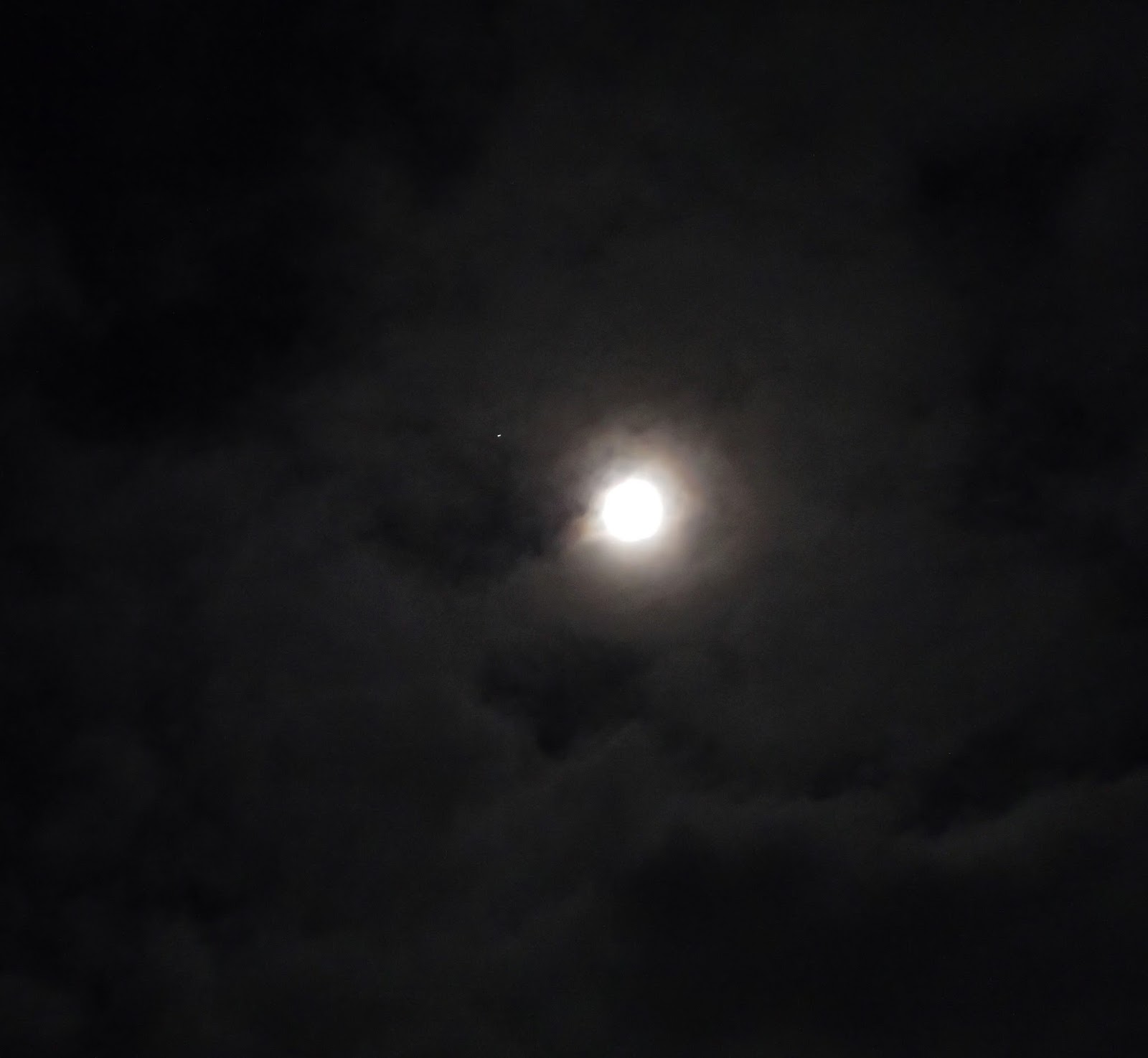 The cloud, though not completely cleared, was thin and patchy allowing the moon to shine through with astonishing intensity onto the snowy fields behind the house.  I simply couldn't go to bed and pass up this rare chance.  The roads were snow-covered and untreated so going any distance wouldn't be advisable - I thought closer to home and decided to try for a round on the Correen Hills.  Driving to the top of the Suie road would get me high to start with provided I could drive up there.

I packed a rucksac with full winter hillwalking kit and took food and water sufficient for the night; I was quite prepared to make it a full night walk if the conditions held.  It seemed that I could snatch most of the conditions described above save that I'd be on hills rather than the high mountains. I got up to the start point on a somewhat tricky road and had to use a snow shovel to dig a parking space such was the snow which had fallen during the day.  Right from starting out my head-torch remained in my pocket, I just didn't need it even in the forest.  The forest tracks were ankle deep in snow; I had considered skis but on unconsolidated snow they wouldn't have been much quicker than walking. 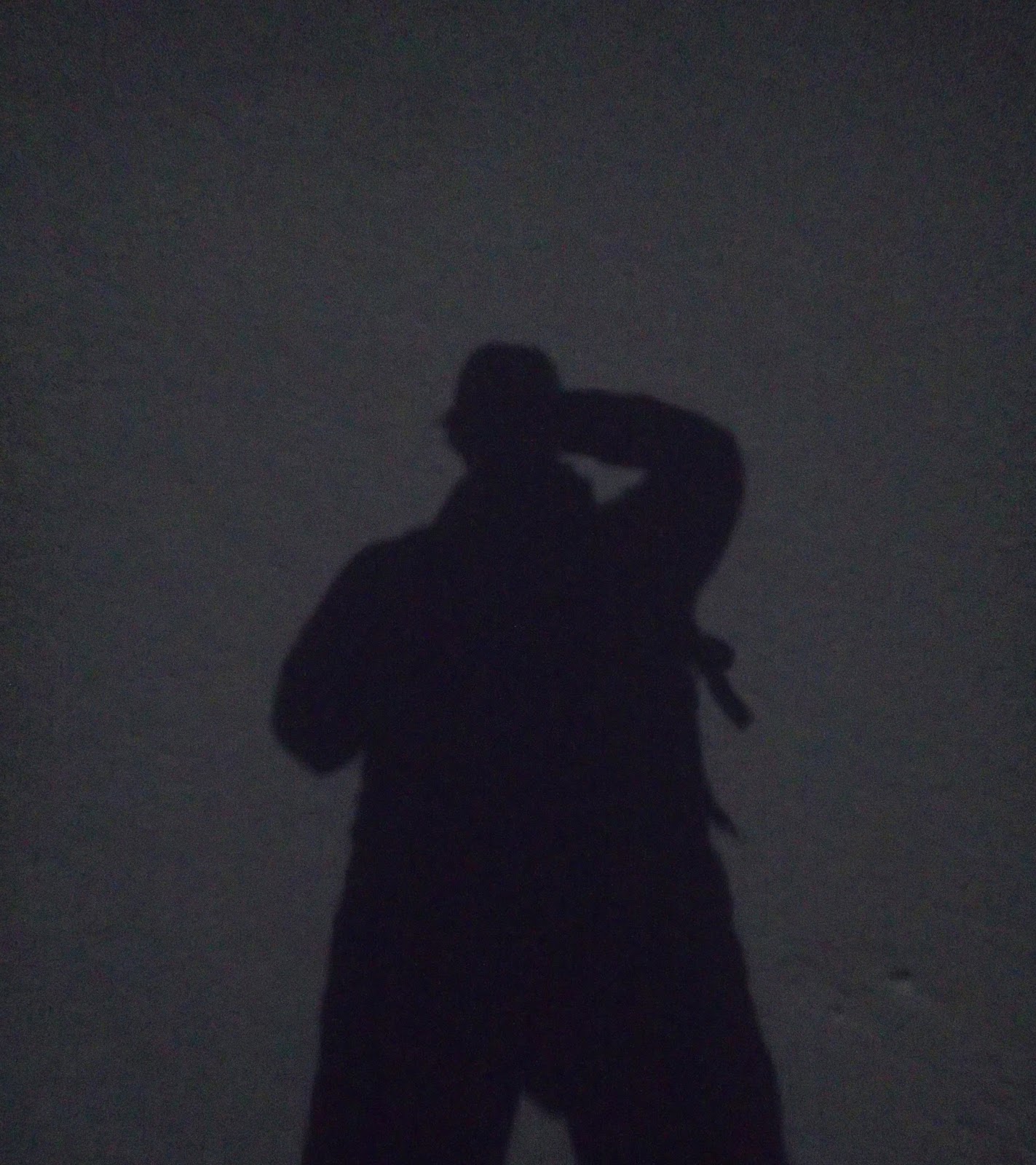 When the moon was in the patches of completely clear sky the quality of light was absolutely amazing, an intense, pure hard white light throwing pin-sharp shadows.  It was cold and breezy but I was getting increasingly warm walking through the deepening snow.  I'd hoped that the snow on the exposed ridges of the Correen Hills would have been scoured clear by the wind but in fact it was even deeper above the forest; and was proving to be unmitigated labour to walk - at times- wade- through.

I decided to scale back my plans and to make the first summit of the ridge, Mire of Midgates, my objective.  The 1.5km traverse from the treeline to the 487 metre/1598 ft summit took well over an hour of hard graft and I was breathing very heavily when I got there - but the view was more than worth the effort. 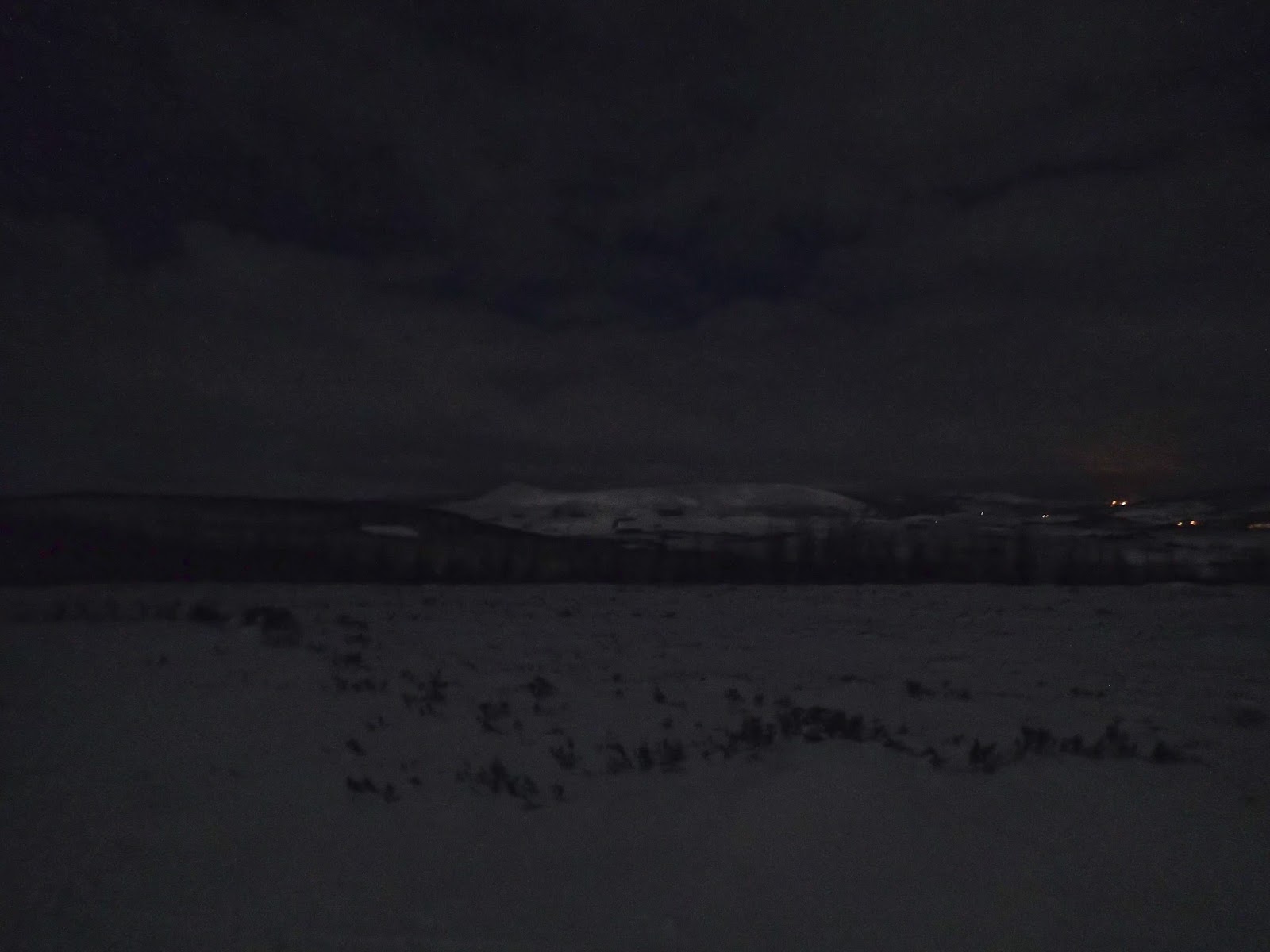 To the north the distinctive shape of Tap o' Noth with its hillfort was alternately spotlit and thrown into chalky shadow as the cloudbreaks raced overhead.  To the west the big Cairngorm hills were a sweep of white across the horizon - pin sharp across 40 kilometres of space; I was able to pick out the tors on Beinn a'Bhuird although my photographs in that direction didn't expose at all well.  I spent a full half hour just watching the scene as the moonlight came and went; it was a truly great night to be out on the hill.

Eventually the cold started to bite and it was time for me to head back. The tracks I'd ploughed made my return a little easier even though they'd partially drifted-in during the time I'd been on the ridge. 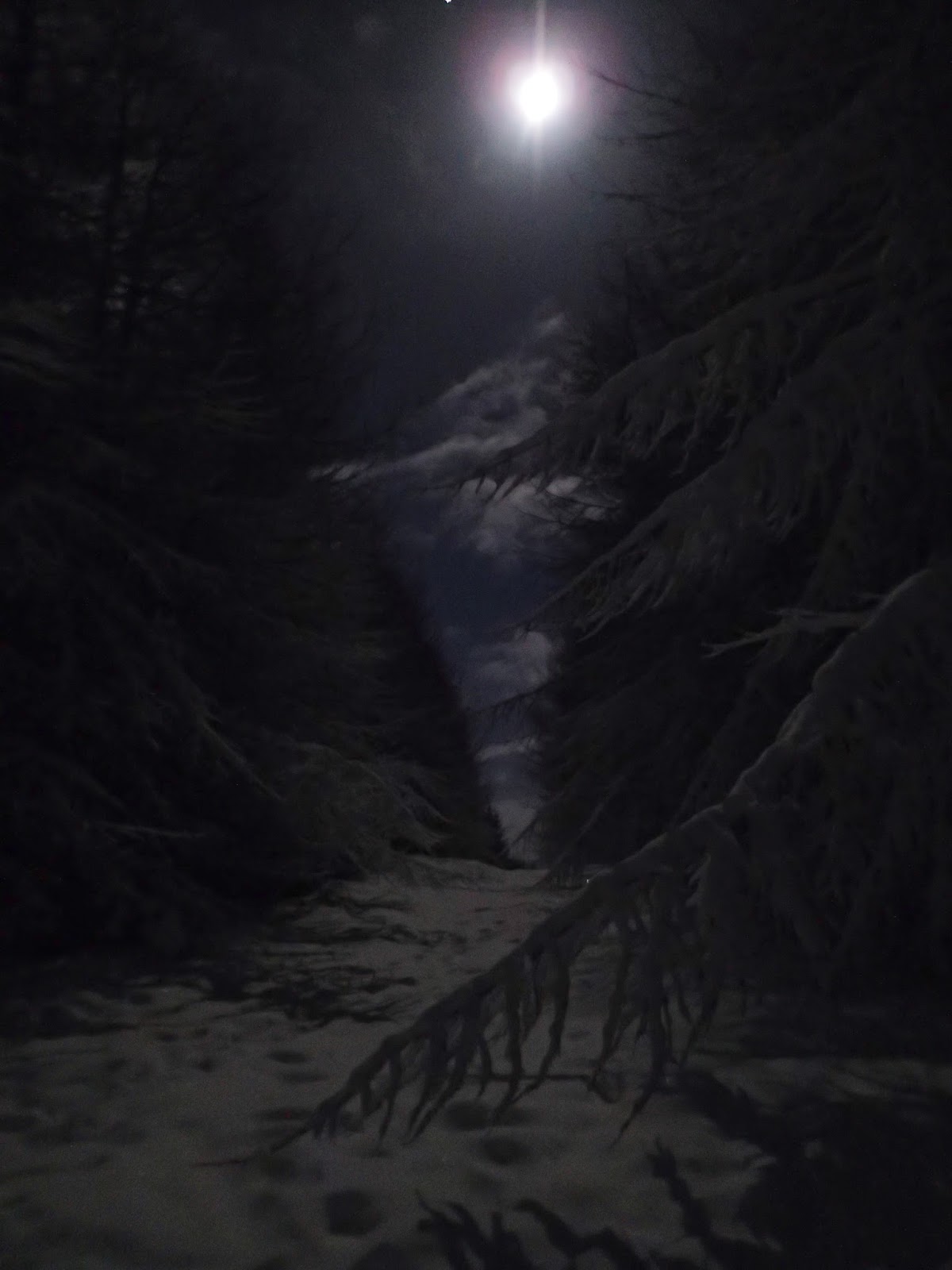 Perhaps the most atmospheric part of the walk was coming back down when I opted to use a route down a narrow firebreak rather than the wide forest track.  The moon lit the way and both trees and snow were sparkling in its hard light.  The air itself was glittering as, sheltered from the wind, frost and tiny snow particles caught the moon's light as they fell.

I'd fallen short of the conditions described by Bill Murray in being on lower hills, on a night less than fully clear and on unconsolidated snow which had curtailed a longer expedition, but I didn't care one bit.  The rare coincidence of conditions had given me a memorable night out. 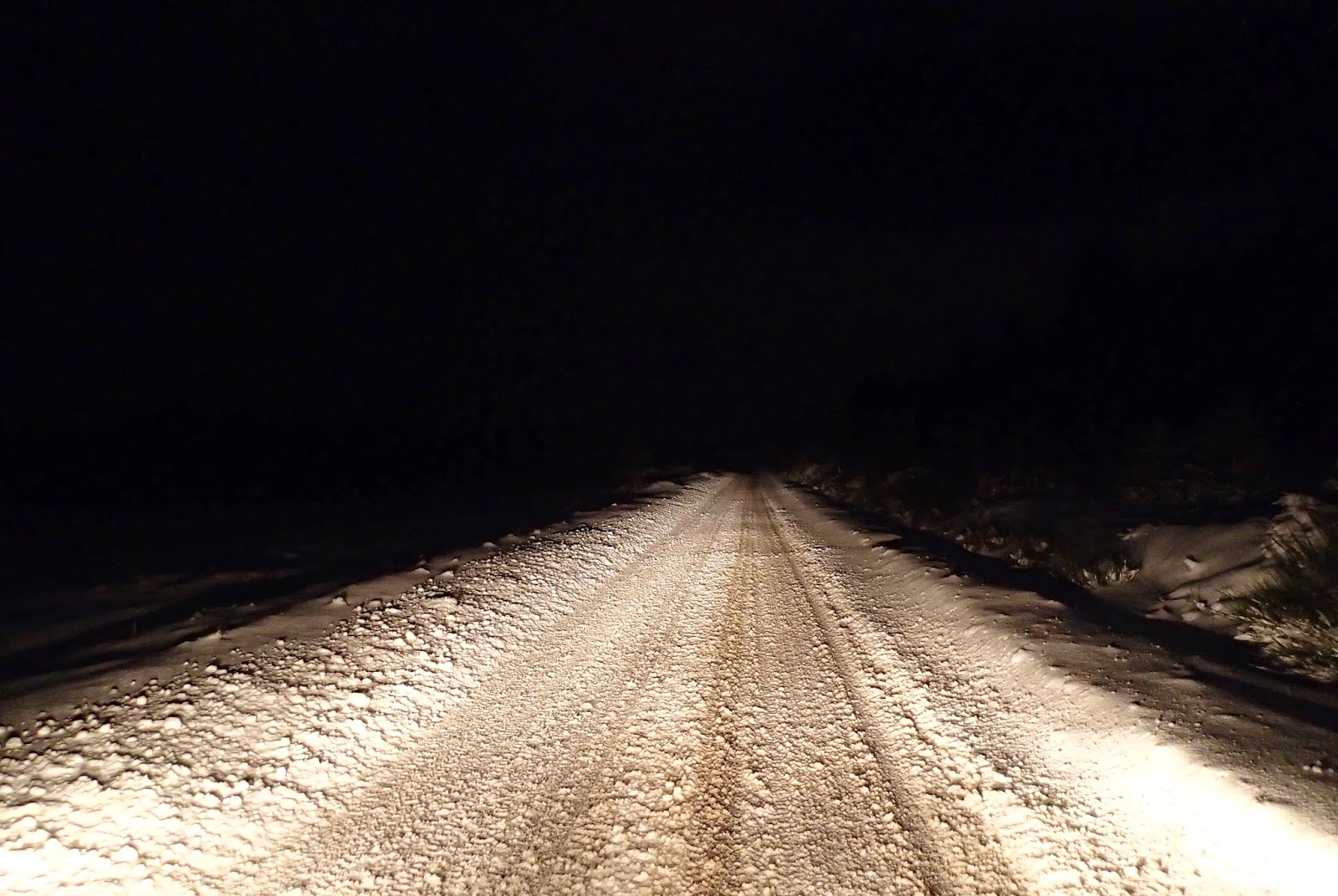 At 0200 I arrived back at the car for the short drive back down the hill to home and bed - the xenon glare of the headlights the only artificial light I'd needed during the whole walk.......
Posted by Ian Johnston at 11:01