In the bleak midwinter - hearts of oak 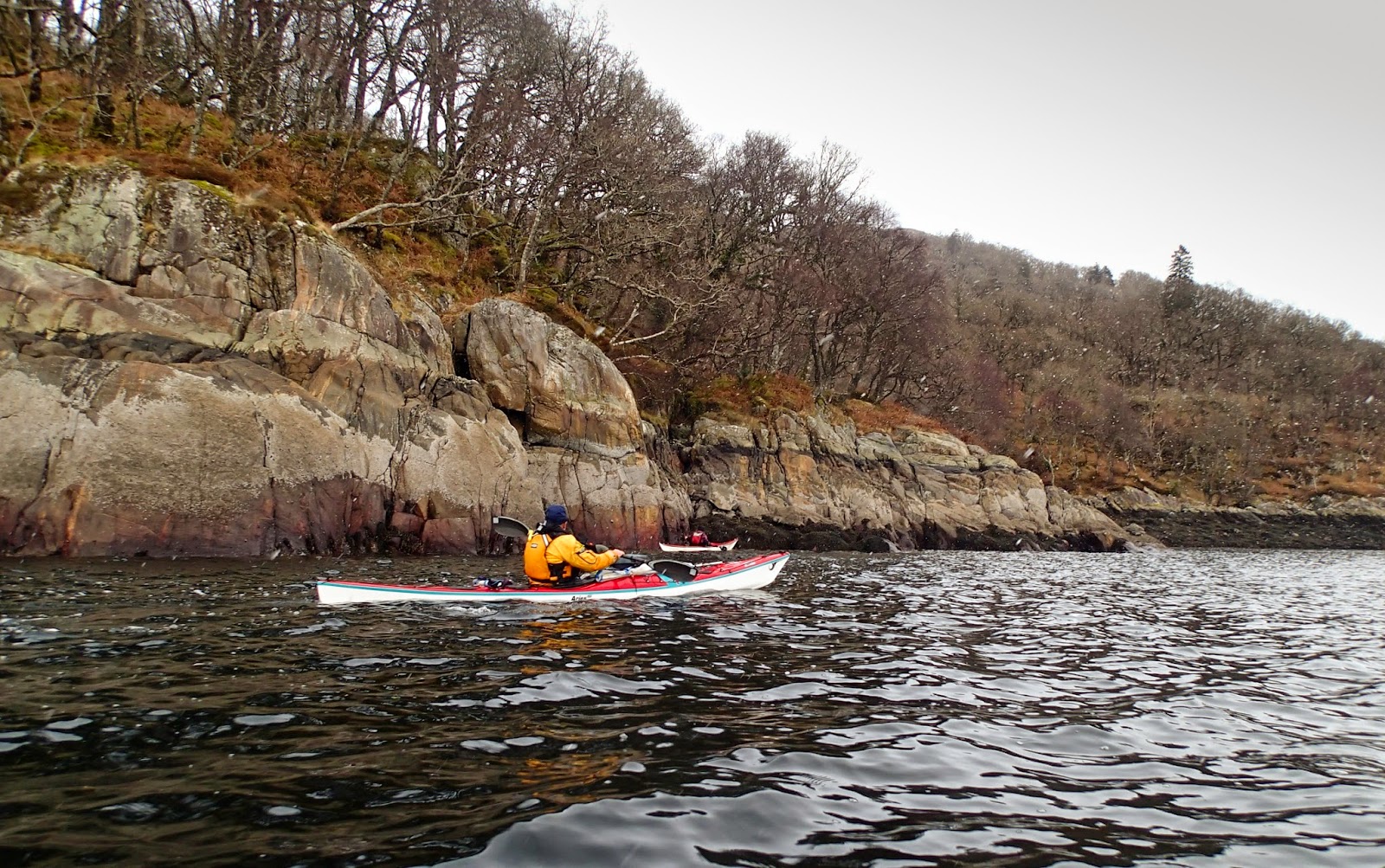 After lunch we set off back along the shores of Loch Sunart towards Strontian.  The shoreline is generally rocky and wooded to almost the tide-line with a mix of mainly oak and birch with some holly, rowan and hazel.

The oakwoods here are of international importance as they are one of the largest surviving areas of Atlantic Maritime oak woodland - Scotland's very own rainforest.  The oaks are not the huge English oaks, but Sessile oaks (Quercus petraea) which grow smaller and can tolerate high rainfall.  Rainfall is what really makes these woods so special, the very wet climate favours luxuriant carpets of "lower plants"- mosses, liverworts and lichens - covering boulders and fallen branches in a green profusion.  Clearings within the wood are home to flowering plants and moor grass which in turn provide food for butterflies; the Ariundle woods are among the few sites where Chequered Skipper and Pearl Bordered Fritillaries can be found in Scotland, both species requiring the specialised conditions and food plants found in an Atlantic Oak wood.

Of course an oak wood is one of the most productive of forests.  In Spring and Summer the wood bursts into life and is full of the hum of insects and with birdsong.  This area is also a stronghold for scarce mammals such as Wildcat and Pine Marten; in fact Simon and Liz have a Pine Marten regularly visiting their garden.

It's perhaps in Spring and Autumn when these woods are at their most vibrant and full of colour and life, but winter is by no means a "dead" time in a wood.  These most special, most Scottish woods - the Atlantic rainforests- are a delight all year and it's intruiging to think that at one time most of the western sea-lochs would have been wooded just like this.

Precipitation is what sets the oak woods apart, and as we paddled along we were precipitated on by sweeping snow showers which trailed curtains down the loch, but it was by no means cold. 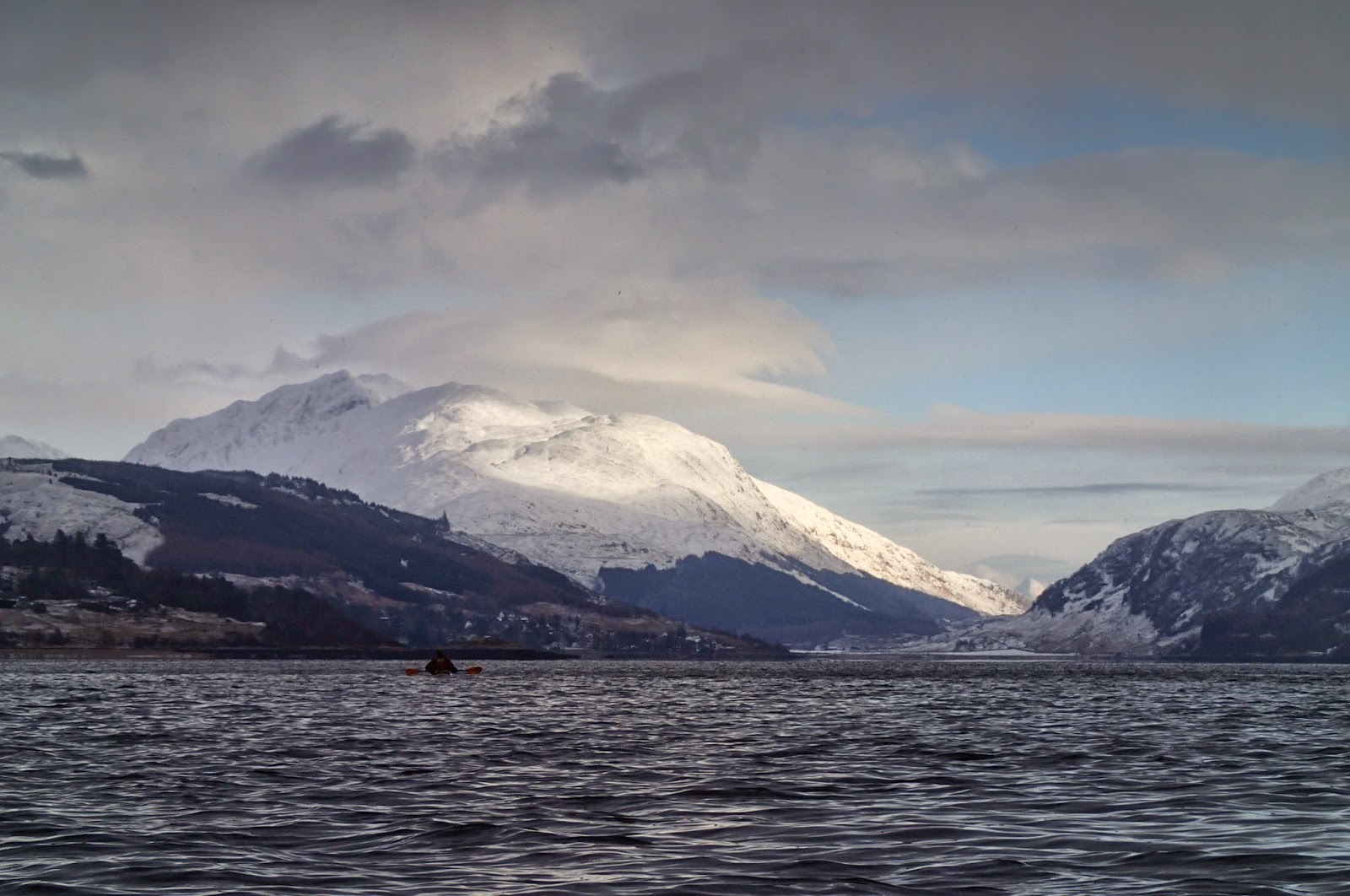 Between the showers occasional patches of sun enhanced the contours of the hills near the head of the loch; this is Garbh Bheinn, the other flank of the mountain which we'd seen so well a couple of days previously 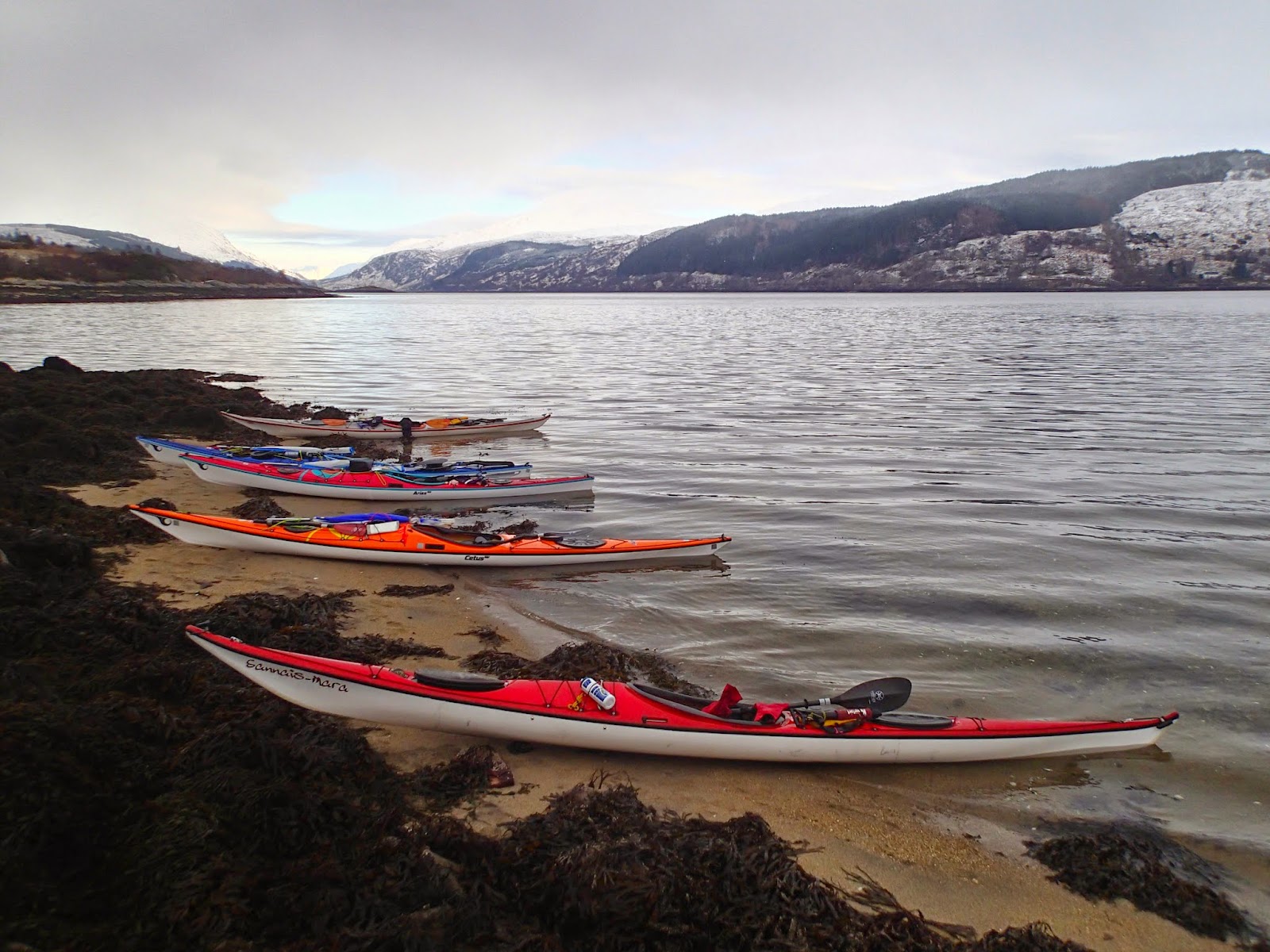 Part way up the loch Mike noticed a tiny sandy beach exposed by the ebbing tide.  This was too good to pass and we pulled in for second luncheon, this time accompanied by a rather fine dram of Jura.  Malt whisky is of course matured in oak casks, it was very appropriate to be sitting below the living relatives of the casks which contained the spirit that so warmed our hearts! 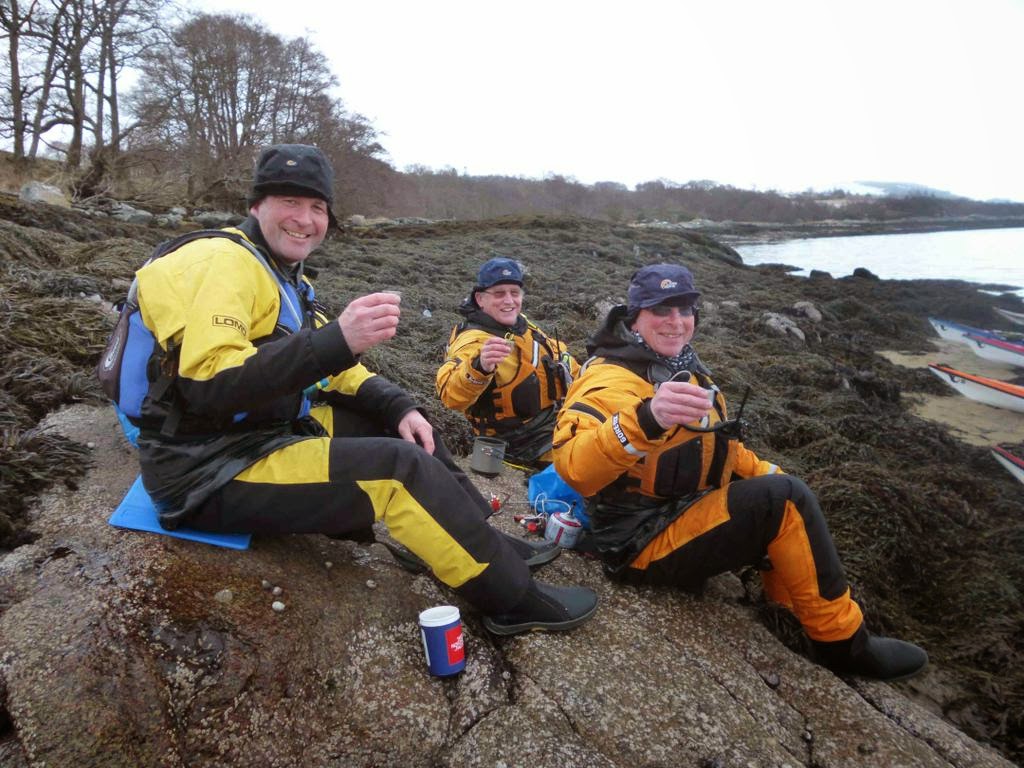 Photo: Simon Willis
Simon suddenly laughed and pulled out his camera - his snapshot caught Mike, Douglas and I looking very much like the three characters from the TV series "Last Of The Summer Wine", though perhaps "Last of the Winter Whisky" might be more appropriate.........  :o) 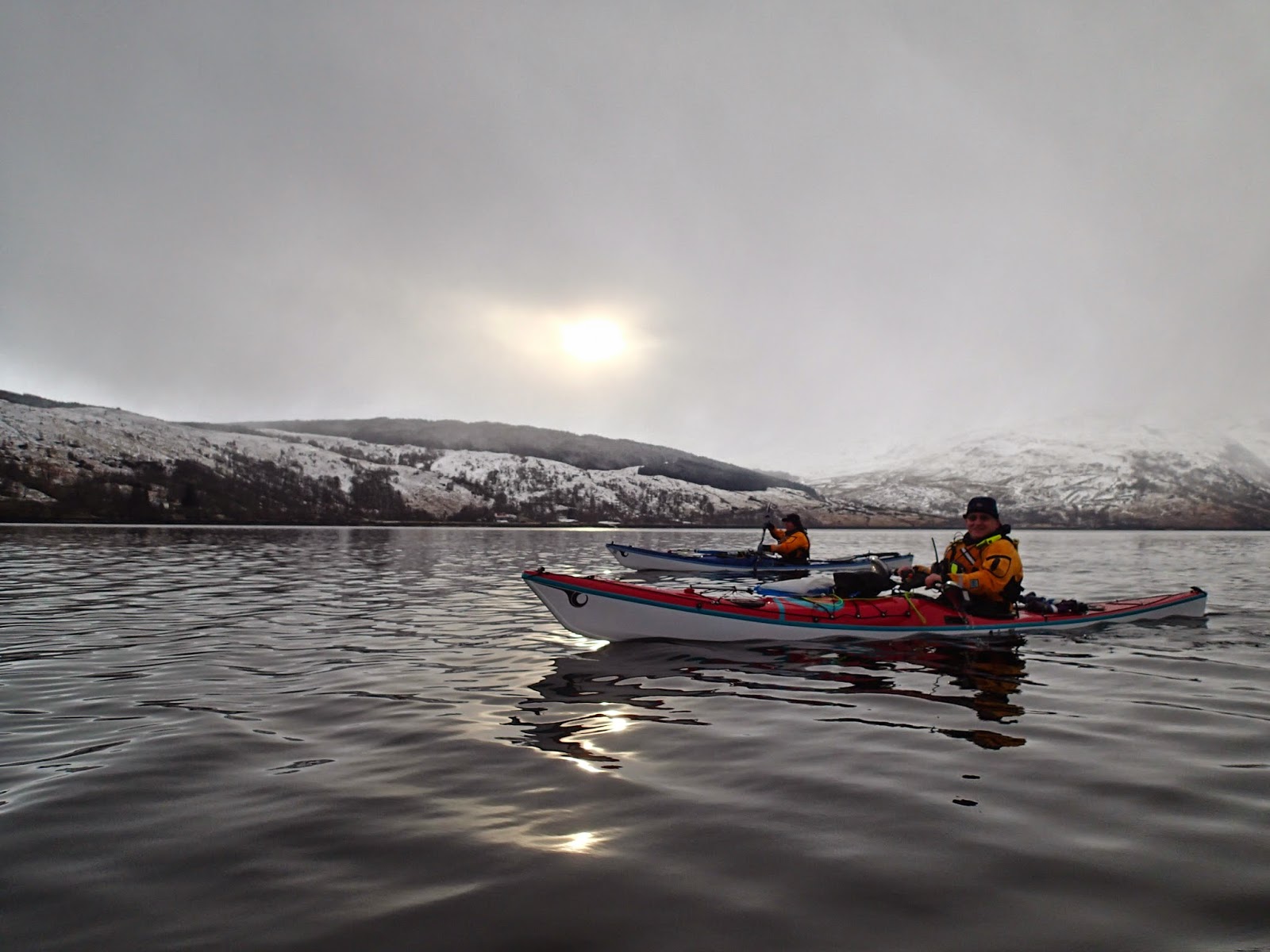 Suitably refuelled we got back in the boats for the last few kilometres to Strontian.  The wind had died completely and a luminous mist lent an ethereal quality to the light, it was a very relaxed paddle. 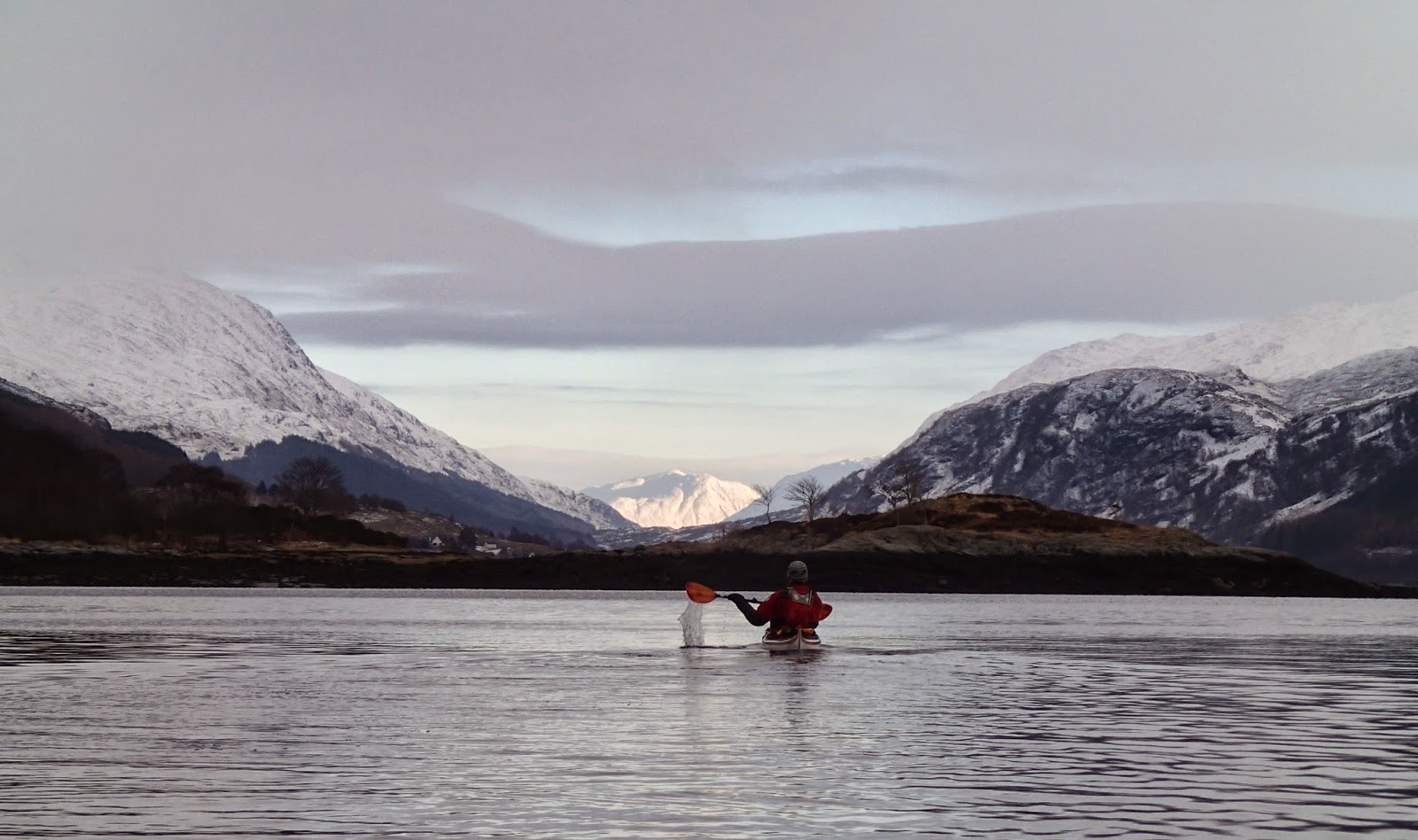 Approaching Strontian we had a most marvellous view ahead.  The mist had put a lid across Loch Sunart and the eye was drawn to the only clear air, through the trench of Glen Tarbert to the brilliantly snow-covered hills of Glencoe across Loch Linnhe.  It had been great to catch up with our friends Liz and Simon and the day had been winter at its most gentle......heart-warming among the oaks.
Posted by Ian Johnston at 18:06