In the bleak midwinter - blood on the beaches of Loch Linnhe 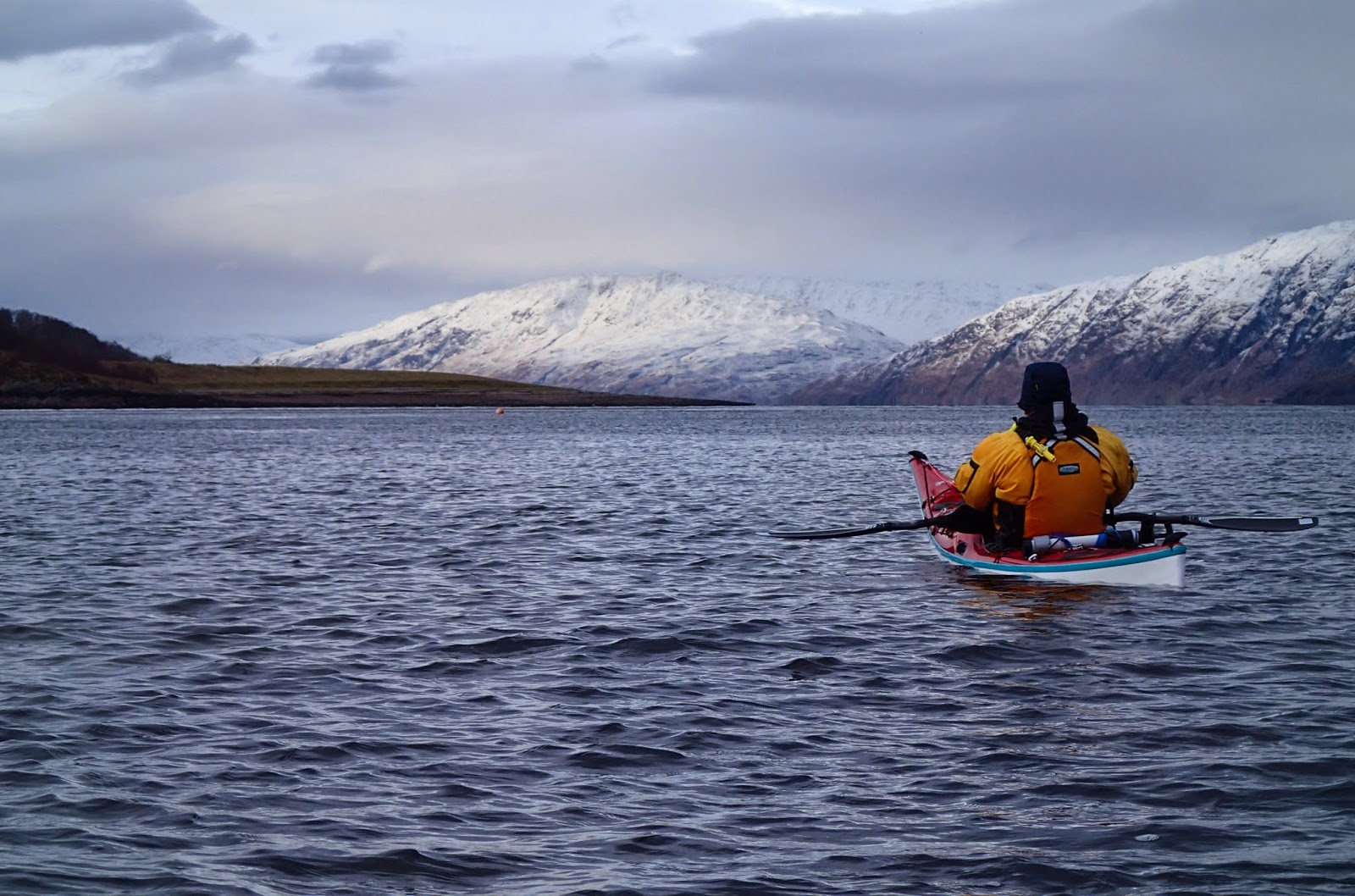 The second day of our midwinter trip dawned cloudy but not as cold as the previous morning.  We were on the water before sunrise and took advantage of the ebb tide pouring out from the Ballachulish narrows and of an easterly breeze, both of which sped us out of Loch Leven and into the long expanse of Loch Linnhe.  The snow had settled and receded noticeably overnight and undeniably the view wasn't as stunning as the previous day, but we certainly weren't complaining!

Our loose plan was to use the ebb to help us down Loch Linnhe before using the flood tide later on to assist us back up to Ballachulish.  We also hoped that a forecast increase in the southeasterly breeze might give us conditions for kayak sailing back northward.  We had no definite goal but thought that it would be good to visit Eilean Balnagowan and possibly the north tip of Shuna before heading back.

It was a pleasant and quiet morning as we paddled along the Appin shore below Ardsheal Hill, the little hill with the big view.  Here on the eastern side of Loch Linnhe there is farmland and some houses and small settlements on the gently sloping ground.  Across on the western side the ground is much steeper with wooded slopes falling straight to the water.  Surprisingly, none of us had paddled this stretch before; we reflected that often Loch Linnhe is overlooked en route to other destinations, but it does make a pleasant paddle in calm conditions. 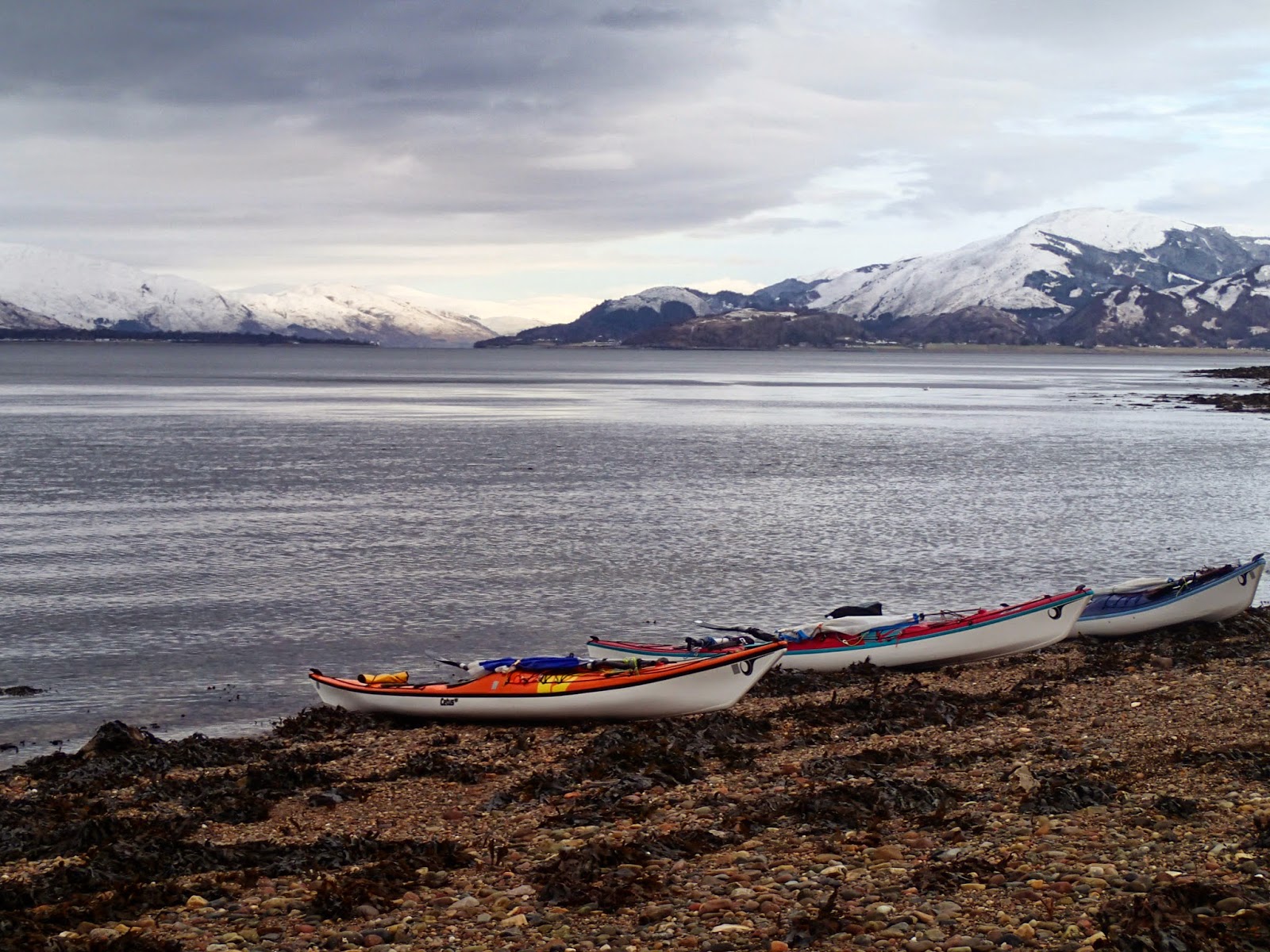 We considered using Cuil Bay as a luncheon spot but quickly realised that it would be exposed to the southeasterly wind which was slowly increasing as forecast.  So when a nice shingle beach with shelter from the wind appeared, the vote was unanimous - second breakfast! 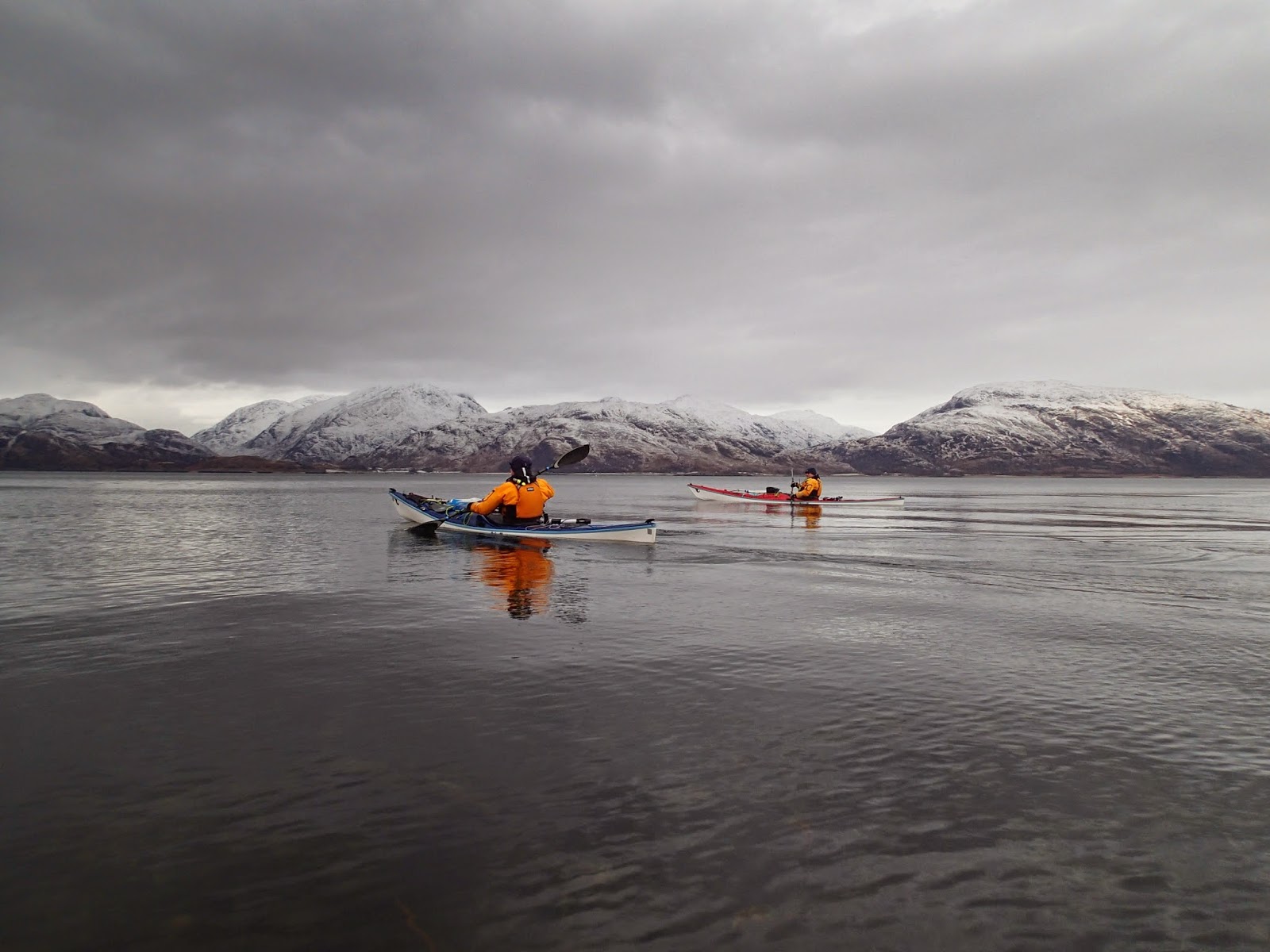 Whilst we brewed coffee, Douglas noticed quite a quantity of blood on his drysuit.  It turned out that he had cut a finger in two places whilst landing, possibly on a sharp stone as there are some beds of particularly jaggy rock at the top of this beach which seems to break readily into fragments.  Due to the cold he'd felt nothing of the cuts and only became aware of them from the steady drip of blood.  A dig into our boats produced three first aid kits and the cut was soon patched up.  Back on the water and our leisurely pace seemed very appropriate for what was an altogether quiet day. 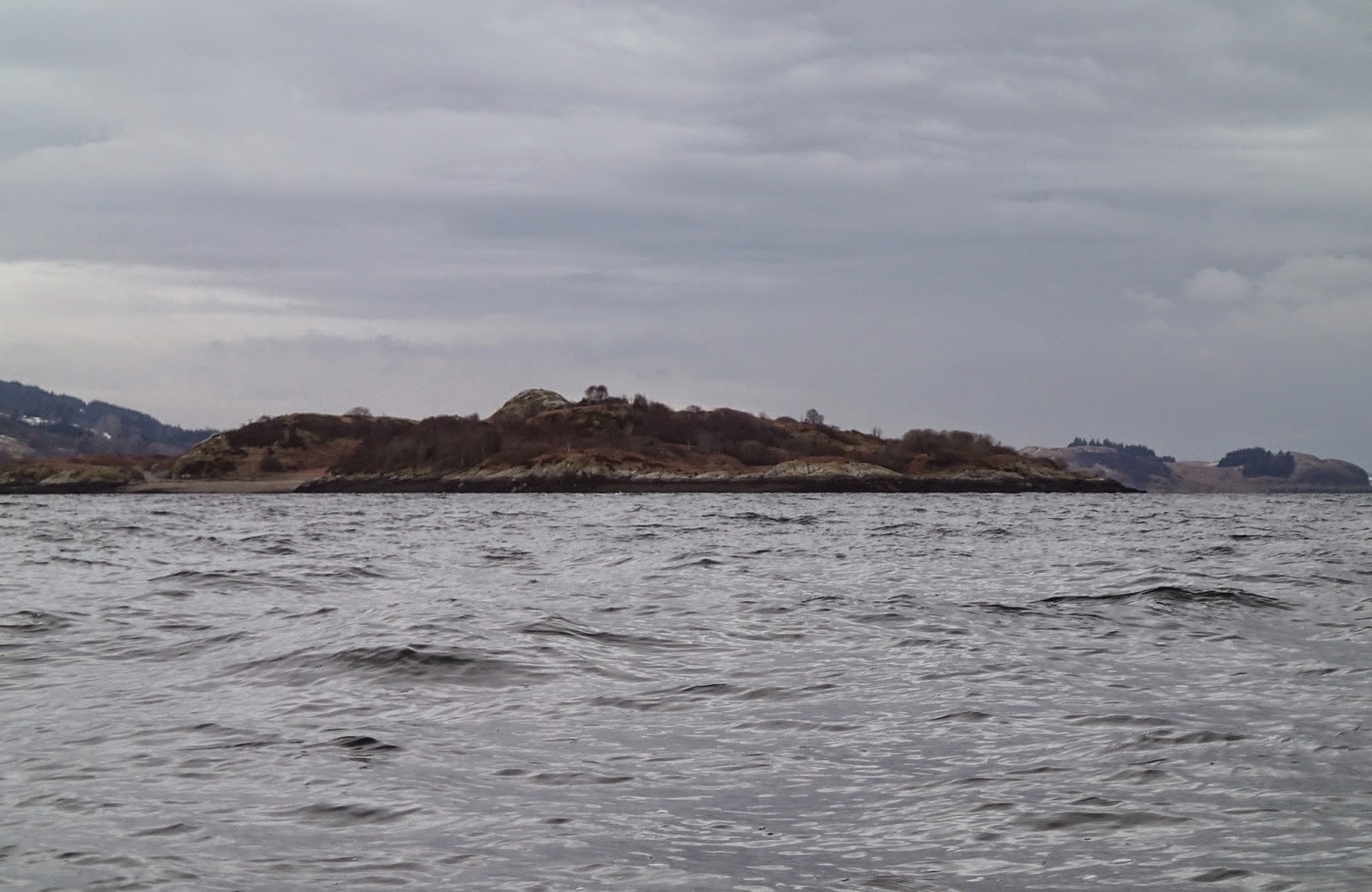 As we came out of the shelter of the Appin shore and into Cuil Bay things got a little less quiet.  Shortly after taking this photograph the wind increased markedly from ahead.  It took a bit of effort to paddle up the F4 - F5 wind to gain the stony beach on Eilean Balnagowan, especially for Mike who found the bow of his boat being constantly blown downwind.  A quick restow of kit on arrival at the island transformed the handling of his boat.  We also re-dressed the cut on Douglas' finger, one cut being on the joint of the knuckle meant that movement on the paddle was opening it constantly.  At least his boat is red so it didn't show up too much!

After second luncheon we took a quick look around the island which has some fresh infrastructure in the form of a landing place, a track and a new house.  Eilean Balnagowan is "Island of the goat town", but we appeared to be the only semi-bearded occupants present!  the words "Gobhar", "Gowan" and "gown" in place-names all hint at association with goats which were much more numerous in the past.

The wind was now quite fresh from the southeast and we decided that it would be quite hard work to make it down the loch as far as Shuna (beyond Eilean Balnagowan to the right in this photograph) so we prepared to head back up Loch Linnhe.  Helpfully the flood had started so we'd have a tiny bit of tidal assistance, I was about to get more than enough wind assistance....
Posted by Ian Johnston at 10:14