In the bleak midwinter - red blood, grey stone and a pink with yellow spots lighthouse... 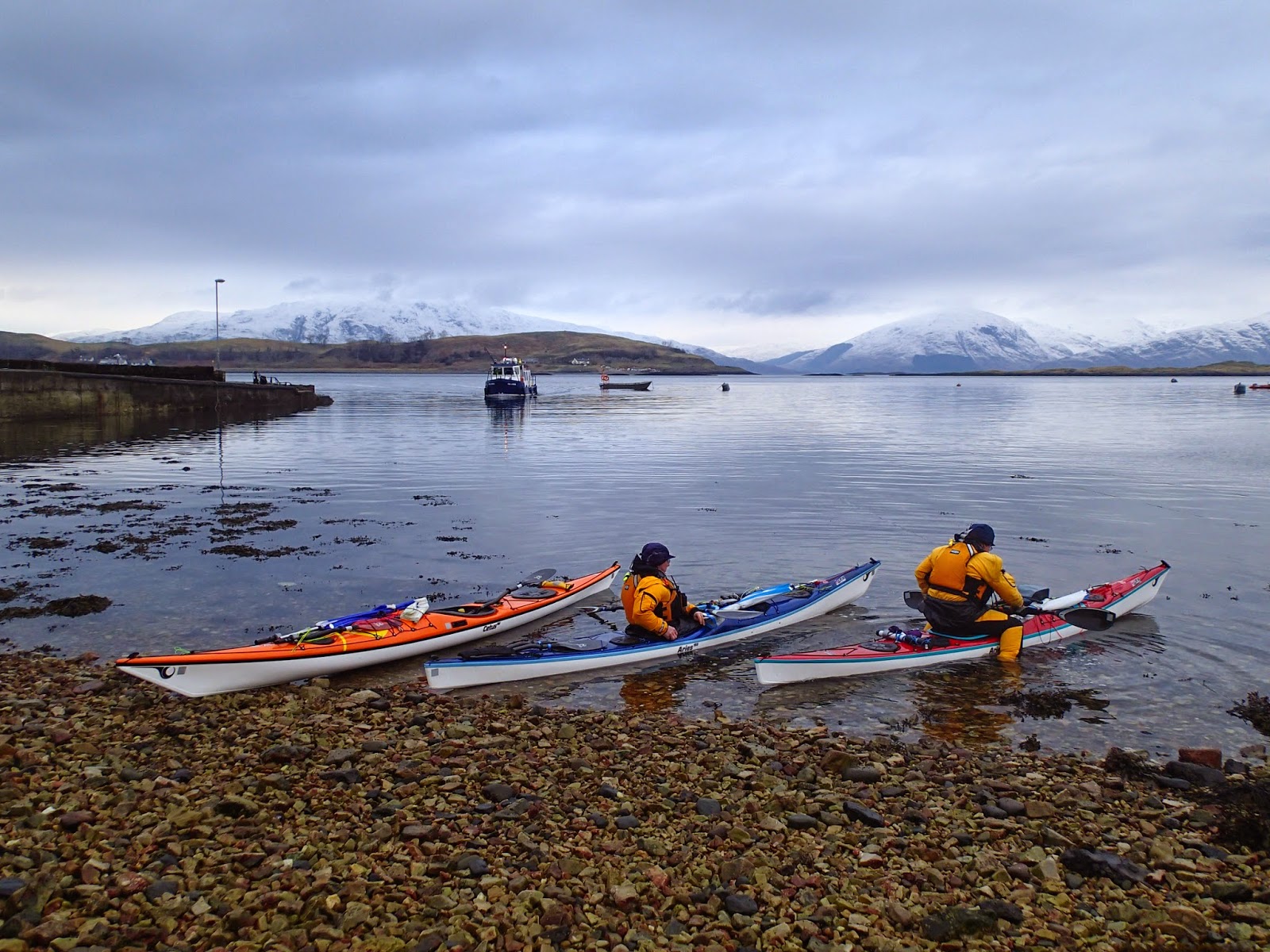 For the final day of our midwinter trip we decided on a shorter paddle, starting at Port Appin.  We would head north to Castle Stalker before circumnavigating Shuna Island.  We also hoped to visit some of the smaller islands off the north end of Lismore.

This area is justifiably popular for sea kayaking as it packs history, wildlife, numerous islands and a bit of tidal flow into a small area.  Having said that, we once again saw more Sea Eagles and Otters than other kayakers !

The trip can be done from a long layby at Polanach on the A828 road but we chose Port Appin as our starting point.  There is parking here just across the road from the jetty which services Lismore, but in summer it can be difficult to find space to park.  Traditionally the ferry port for Lismore, Port Appin was once a busy steamer port and more recently was the main crossing point for workers at the huge Glensanda granite quarry across Loch Linnhe 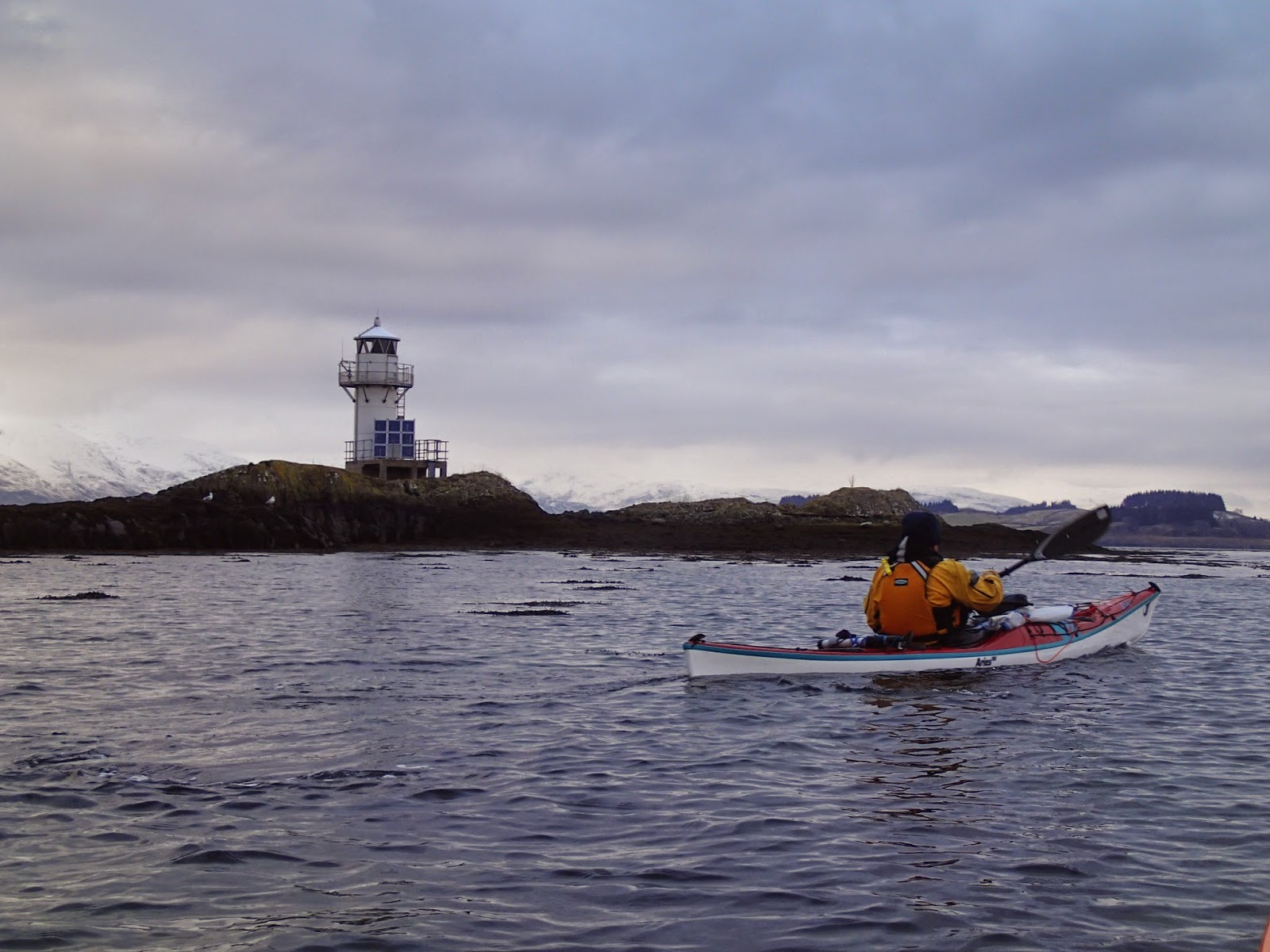 We set out northwards against the last of the ebb tide and soon passed the small lighthouse on Sgeir Bhuidhe (yellow skerry - probably named due to the bright yellow lichen which grows on the rocks).  The first light tower here was a 7 metre high iron tower on a brick base designed by David Alan Stevenson in 1903 and powered by acetylene. It marked the passage from Shuna Island into the Lynn of Lorn and exhibited a white flash with a red sector once every six seconds, visible for up to nine nautical miles.

In 2000 plans were drawn up to dismantle the old light and replace it with a steel tower with white aluminium panels to a simple but souless design.  A local campaign was started to preserve the style of the light which gained wide publicity when the entire existing structure was painted pink with yellow spots in 2001.   Officials at the Northern Lighthouse Board were less than amused, but some good did come of the prank because the plans were revisited and a fibreglass tower more in keeping with the traditional design replaced the old light in 2002, powered by solar panels.  The original lantern is on display in Port Appin village together with an information board. 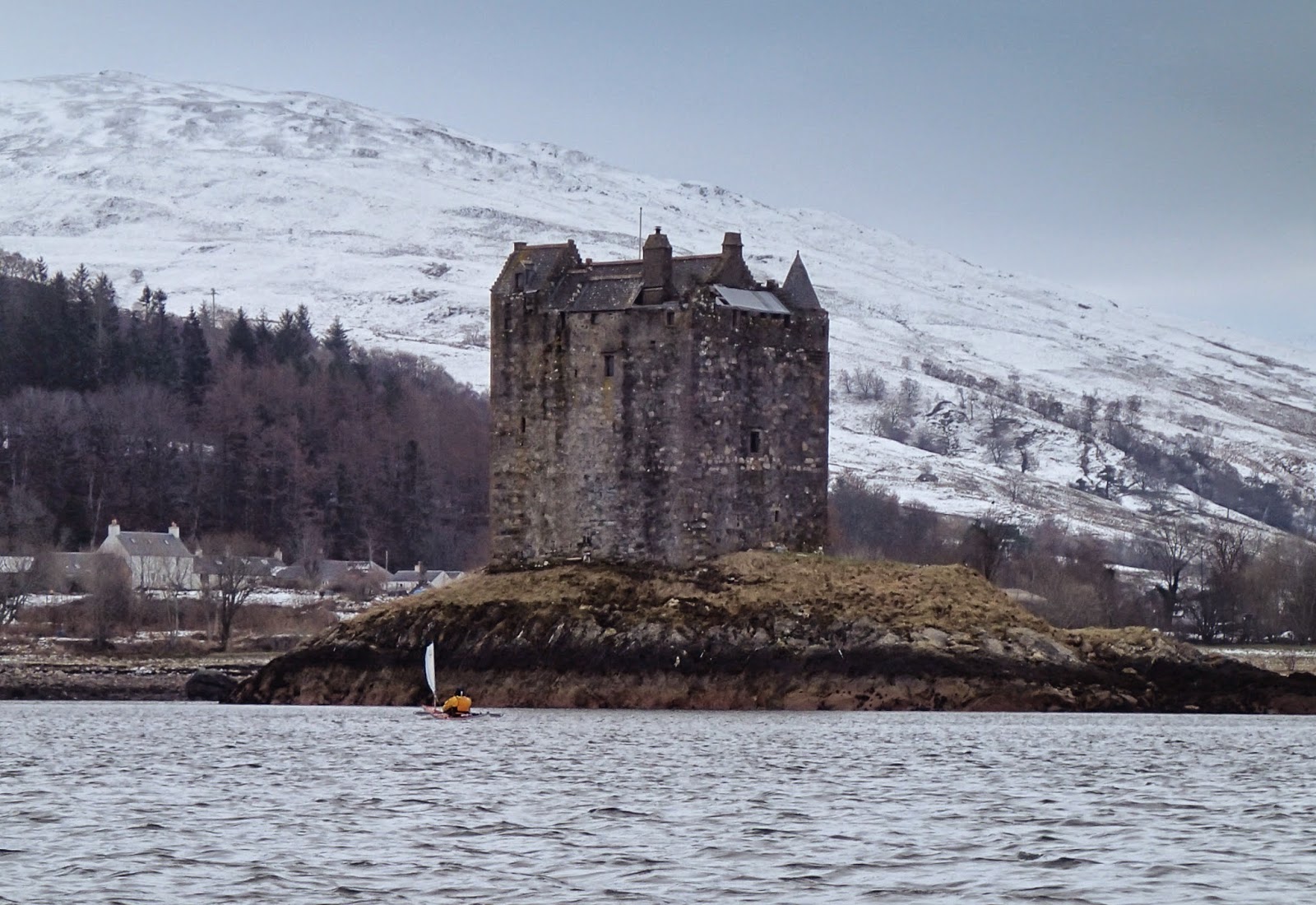 We hoisted sails in the freshening breeze and in no time were arriving below the somewhat older landmark of the iconic 13th century Castle Stalker (Stalcaire - hunter (falconer)).  Built on a rocky outcrop at the mouth of Loch Laich it is surrounded by water except at very low tides when mud and sand would have anyway slowed down any assault.  As with many of the castles in the area it belonged to the MacDougalls of Lorn, a half-norse pirate clan who based their power on control of the sea and on their Birlinns - fast, light ships which could be rowed or sailed and were based on Norse longship designs. 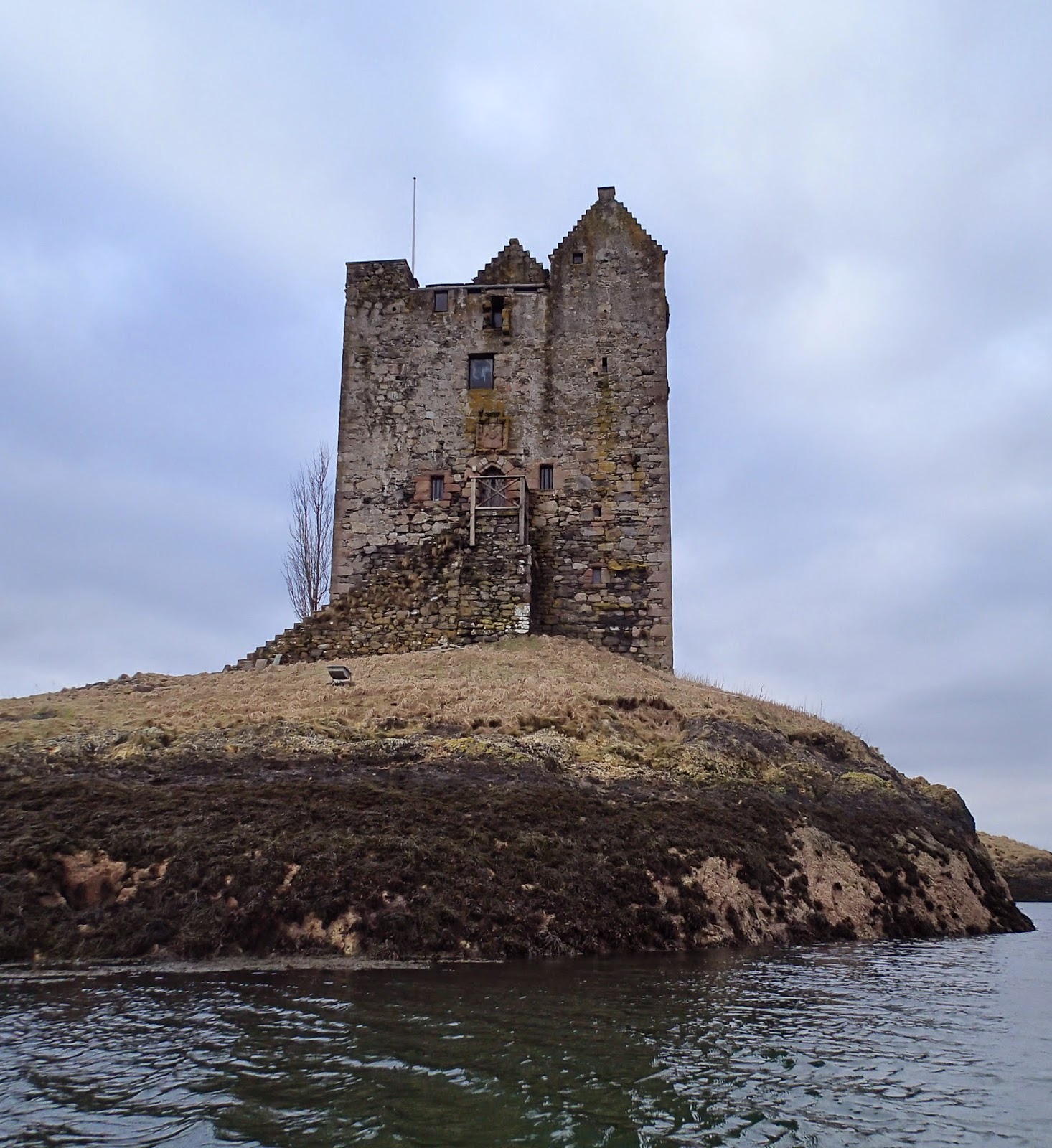 The especially bloody history of the castle is well told on the Castle Stalker website, starting with a murder in 1463, and continuing in a litany of bloodshed until a final unfortunate killing as recently as 1949 when the then owner Duncan Stewart was stabbed in Sarawak; he died a week later.  The castle was purchased by the late Lt Col D.R. Stewart Allward in 1965 and restored by his and his family's labour to a fully habitable state - a quite remarkable achievement.  Some images of the interior of the castle are contained in the "Canmore" archives.

Castle Stalker is one of the iconic images of this part of Scotland, and has also been etched into popular culture by appearing as "Castle Aaaaarghh" in the film "Monty Python and the Holy Grail", notably when King Arthur is taunted from the walls by a defender with an outrageous French accent...... 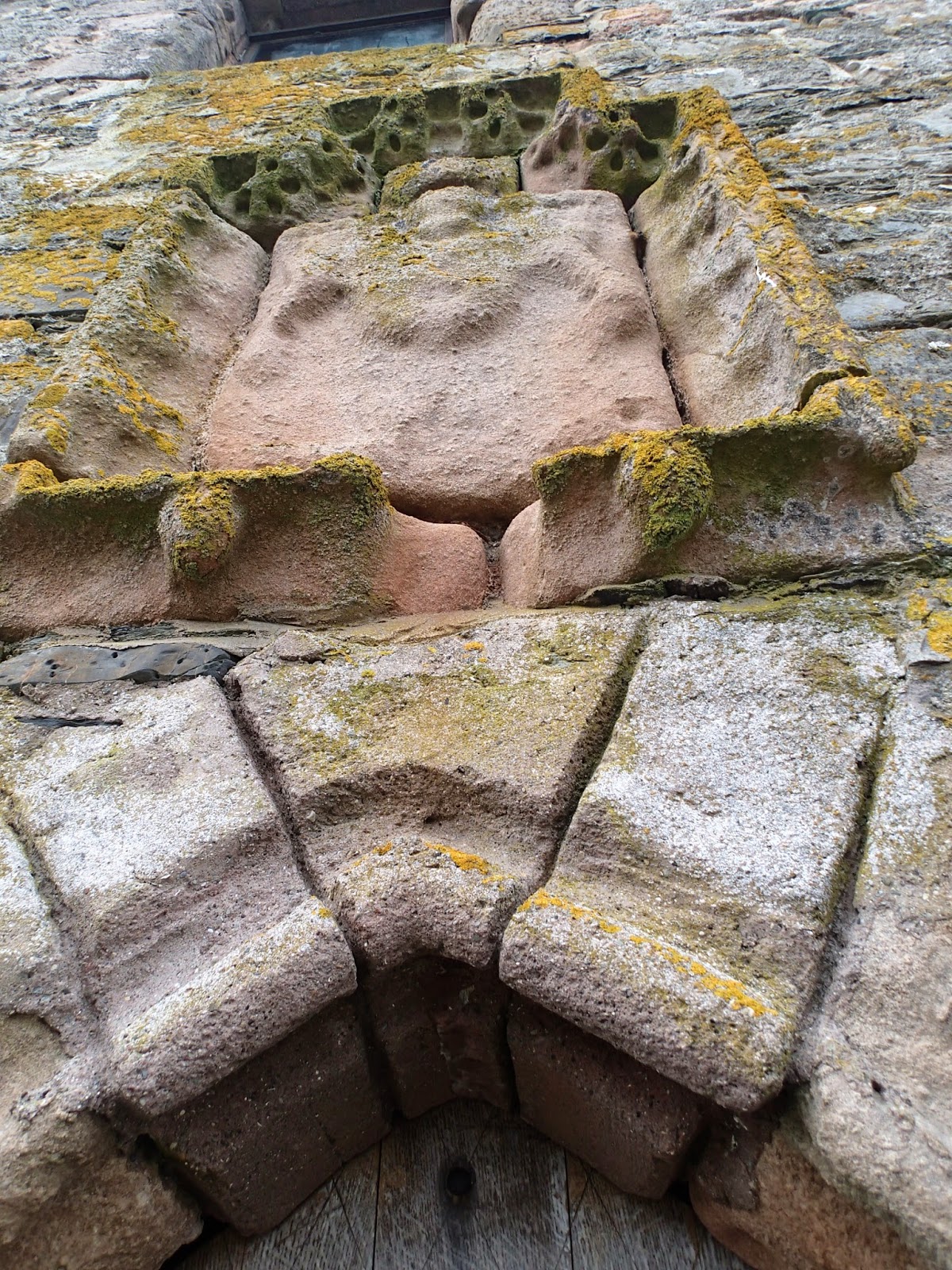 The building is well seen from the road above Loch Laich, but close up the details come alive.  Above the door is a carved coat of arms, heavily weathered but appearing to bear a figure in the centre. 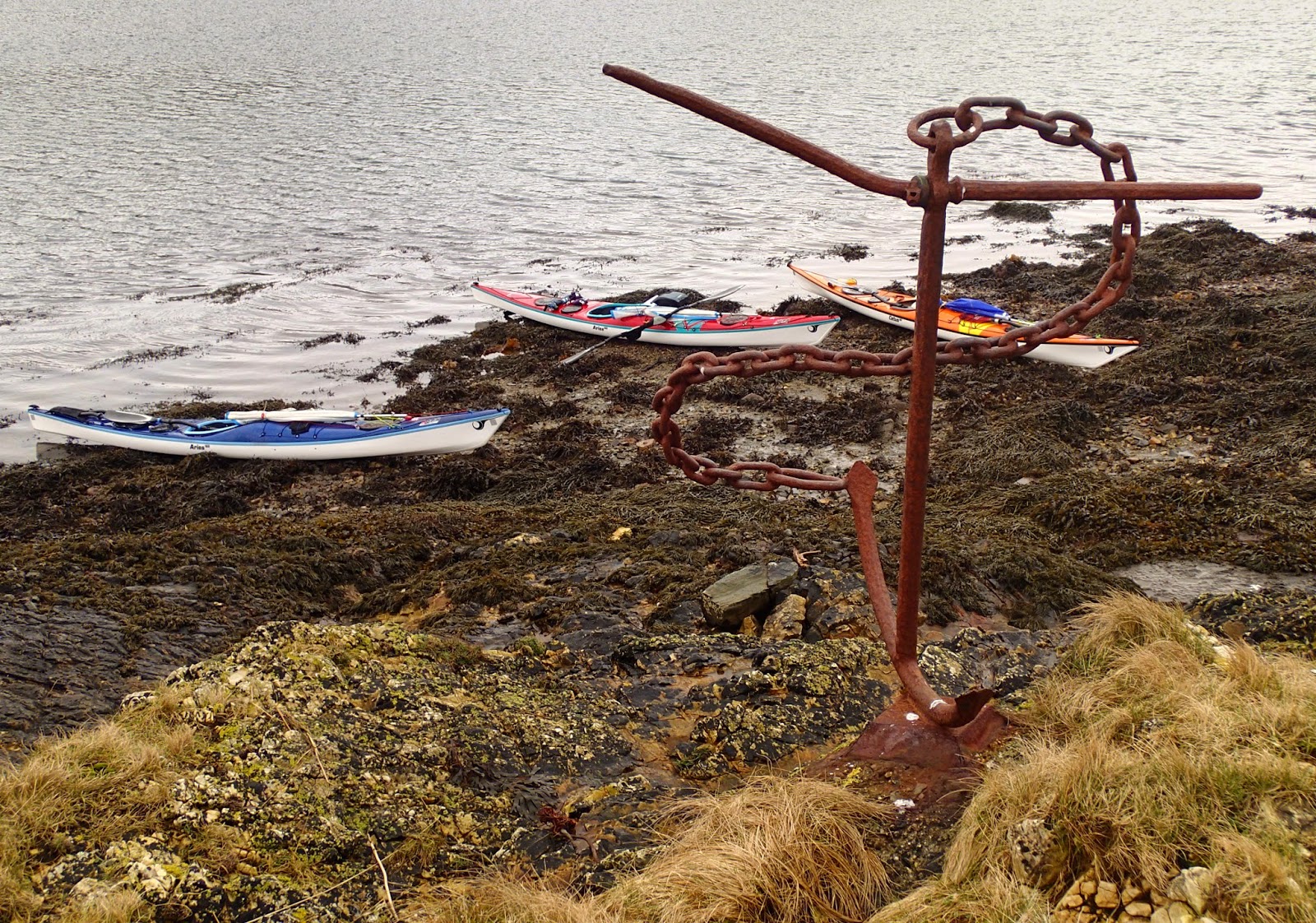 The thin breeze was getting quite chilly so we finished our exploration of the outside of the castle and the island and headed back down to get moving under sail in our own versions of Birlinns!
Posted by Ian Johnston at 12:09