The north east of Scotland is rich in Neolithic and Bronze Age megalithic monuments.  There are many hundreds of standing stones and stone circles, including around forty of a type found only in this corner of Scotland and known as recumbent stone circles.

The Winter solstice seemed an appropriate time to visit one of the circles just a few kilometres from home, Cothiemuir Hill. 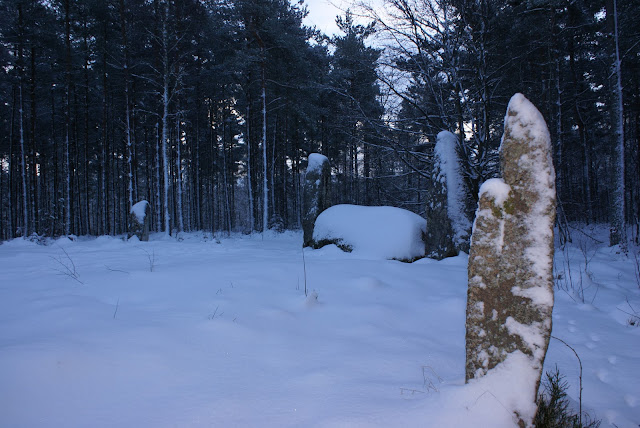 This circle is approximately 75 metres in diameter and remains almost complete.  Now hidden in a wood on a low hill, it would originally have been a prominent monument with an open outlook.  The circle stones (orthostats) are of granite, mostly red but occasionally grey. 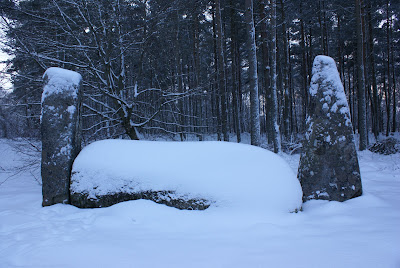 Viewed from the centre of the circle at Cothiemuir Hill, the west flanker (the taller of the two) is aligned exactly to the midwinter sunset. 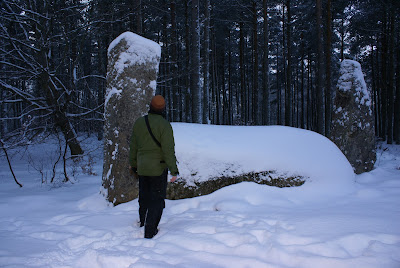 The flankers are 2.9 and 2.7 metres high, and the great recumbent is a 4.2 metre long slab of dark basalt weighing 20 tons.  This stone has been brought to the circle; the work must have been an immense undertaking for a community before wheel and animal power was in use.  Radiocarbon dating for this circle places its construction at around 2700-2500 BC, contemporary with most other recumbent circles.

At the centre of the circle is a large slab with a pit underneath it.  There is also evidence of a paved area leading from the centre to the recumbent.  There was probably a timber circle here before the stones - evidence seems to be emerging that the stones are the closing moment in a long period of use. 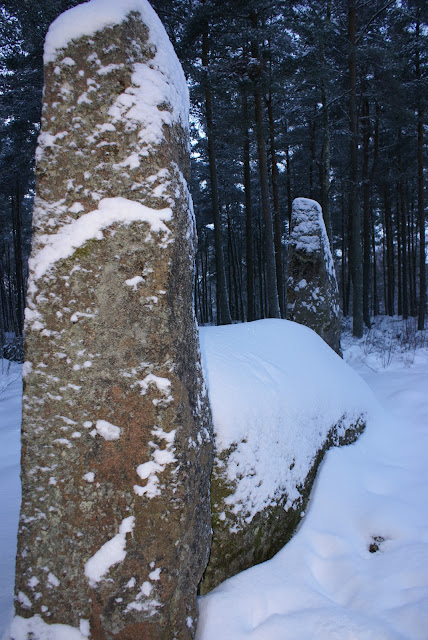 It's clear that these circles were places of great importance to the folk who raised them, and beyond.  Most were in use for well over a thousand years after construction for burials and ceremonies- indeed to this day there are sometimes small tokens left at circles, flowers, ash and the like.

It's almost certain that one of the functions of the circles was to mark out the important lunar events of the year - particularly the midwinter solstice.  In this present spell of unbroken intense frost, it isn't hard to empathise with those who looked to the stones to mark the returning of the light and the retreat of the bitter, dark winter.

A visit at this time of year seemed significant, the stones seem to fit their place, to exude permanence and a faint resonance of the meaning they were raised to convey.  And strange, though I've visited many of the circles, I've never once touched any of the stones - I don't know why, other than superstition; which is perhaps part of their power to this day!
Posted by Ian Johnston at 22:10