Wildlife and history, a stone's throw from the city

Moving farther north east along the north shore of the Moray Firth, I arrived at the narrow entrance to the Cromarty Firth.  The rock stacks which stand on each side of the entrance rise to about 140 metres and are crowned by gun emplacements.  Sutor is an old Scots word for a shoemaker; local legend is that two giant shoemakers used the cliffs as their lasts and threw tools between the two. 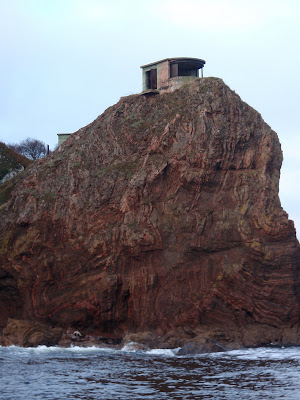 The gun emplacements were built in the early 20th century and saw service in both World Wars.  Interestingly, the records show that the artillery batteries were operated by Norwegian personnel during WW II.  They stand now as testament to a different time, a different world.

On an altogether different timescale, the folded rocks of the Sutors attracted the attention of the geologist Hugh Miller.  A self taught geologist who was born in Cromarty and was a quarryman before becoming a geologist, he did much important work on both fossils and Old Red Sandstone and was also a somewhat controversial evangelical Christian.  The book "Hutton's Arse" gives an excellent precis of his work. 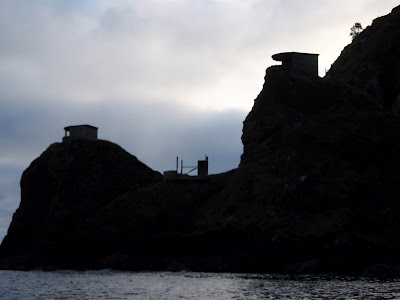 The likeness to a shoemaker's last is obvious when the South Sutors are seen from this angle.

The cold breeze in the entrance channel was chilling me down, but as I turned to paddle back I noticed the dorsal fin of a Bottlenose Dolphin quite close.  The dolphins of the Moray Firth are famous and very well studied.  The population of around 130 animals is the most northerly in the world and the individuals are some of the largest too.  I've seen them from a distance before but not been lucky enough to be close.

It soon became obvious that there were two females, each swith a calf which never strayed beyond touching distance of it's mother.  They were feeding in the shallows, occasionally "tail standing" to reach among the weeds.  I sat quietly as they approached and then became aware of me.  After circling for a minute or two, each of the females came very close with it's calf - actually to touching distance.  I got eye contact with each of these beautiful animals - a truly amazing experience.  At no time were they nervous or aggressive, merely curious and engaging. 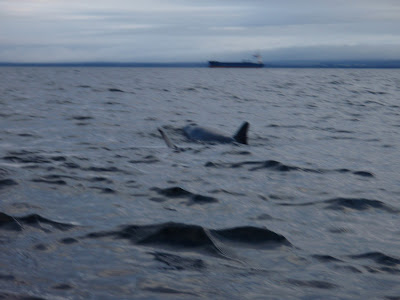 I was so enthralled that I only thought to reach for the camera as the dolphins were moving away - the only photographic record of a truly memorable experience is this fuzzy shot.  The dolphins continued south west along the shore in the same general direction as I paddled back towards Rosemarkie, completely unfazed by the strange yellow creature briefly sharing their world.  I've seen dolphins on the bow wave on ships all around the world - but this encounter was in a different league 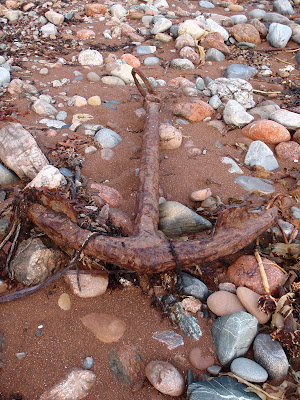 On the way back to Rosemarkie I noticed the remains of a couple of stone huts in quite inaccessible parts of the shore. I landed beside a complete example and found that it was a restored "salmon bothy".  A crew of four would operate a Coble out of here from February to August, staying at the bothy all week except Wednesday afternoon, Saturday afternoon and Sunday.  Inside the bothy are information boards about the salmon fishing, geology and wildlife of the area.

This anchor on a nearby beach may well be from either the boats or large nets in use at the time.

I arrived back at Rosemarkie in near darkness.  It had been a memorable paddle with wildlife, history and geology on a wild and rugged coast.  The surprising thing is that I started just 10 kilometres from the centre of Inverness and was never more than 25 kilometres from the city.
Posted by Ian Johnston at 12:41