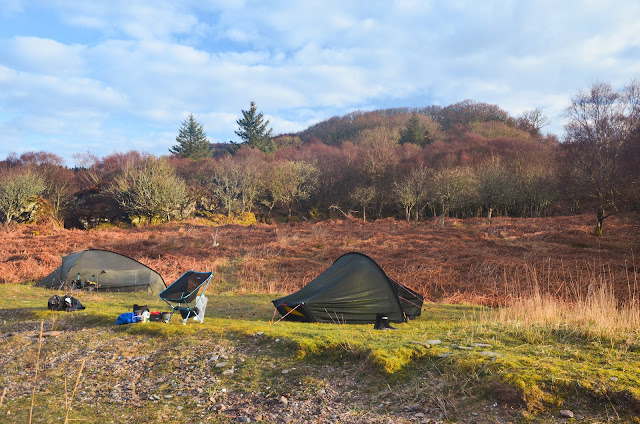 The morning sun on the tent woke me early at our camp on the shore of Loch Fyne.  Up and about, I made breakfast and enjoyed the sunshine on what was clearly going to be a fine Fyne day. 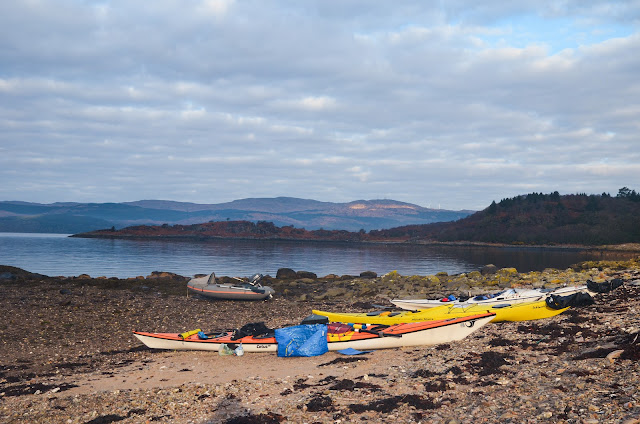 We left our tents up until the last minute as there was quite a bit of condensation from the cool night air, but by 0900 we were packed and ready to carry three kayaks and one F-RIB down the pebble beach to the water. 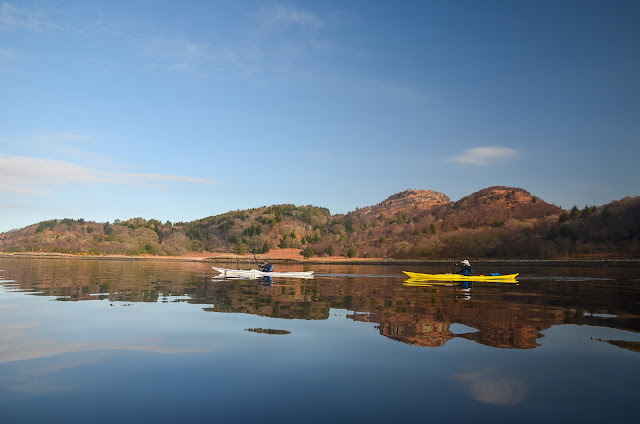 And what a morning!  Our plan was to head over to Tarbert for second breakfast and we made the 6km crossing of Loch Fyne in idyllic conditions. 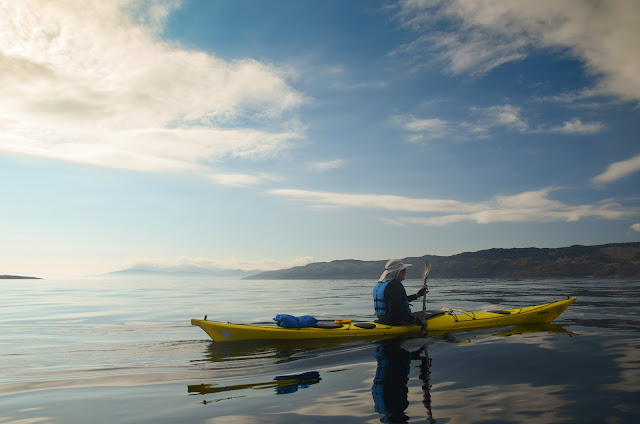 To the south the Arran hills were cloud-capped - in fact they had cloud cover throughout the four days we were in the area, even when everywhere else was in bright sunshine. 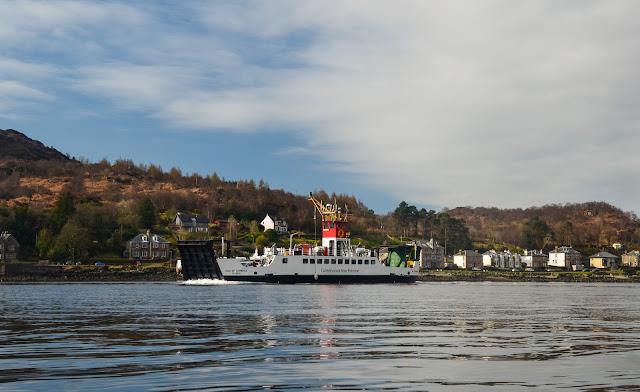 We stayed on the north side of East Loch Tarbert so that we wouldn't be in the way of the ferry which sails on a very regular route to Portavadie from here.  On this beautiful morning all of the Isle of Cumbrae's passengers seemed to be sat outside to enjoy the weather and we got a cheery wave from some smaller passengers. 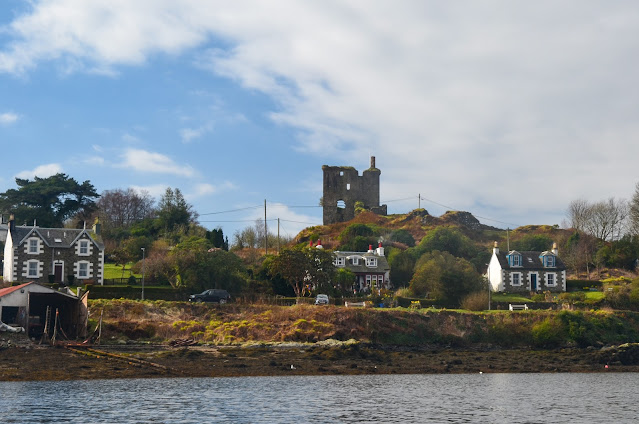 Tarbert is in a very strategic position and has a long history.  The name is shared with several other places and indicates a place where boats could be dragged across a narrow isthmus between to bodies of water - from the Old Norse/Gaelic "Tairbert" or draw-boat.

This Tarbert has a narrow neck of land less than 2km wide separating East and West Lochs Tarbert; being able to portage a boat here avoids the long and potentially hazardous passage around the Mull of Kintyre.  The strategic value of the tairbert was demonstrated spectacularly in 1093 when King Magnus "Barelegs" was ceded all the land on the western seaboard of Scotland which could be circumnavigated in a longship.  He sat in his longship as it was dragged from one Loch tarbert to another and so claimed the entire Kintyre peninsula!

The castle was first constructed in the 13th century, subsequently strengthened by Robert Bruce, was captured by James IV from the Lords of the Isles and last changed hands in the 17th century before falling into disuse. 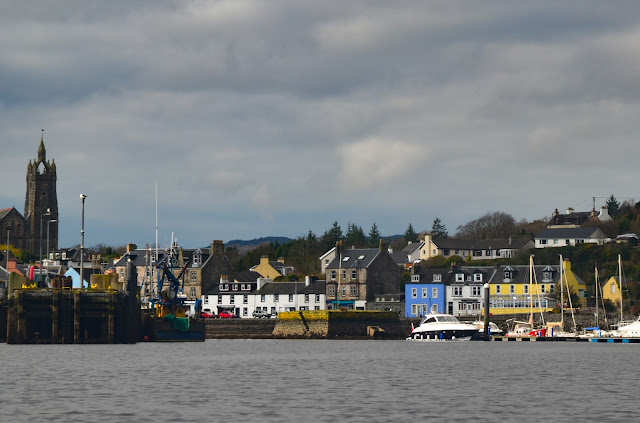 Tarbert is a busy port used by fishing vessels and leisure craft as well as two ferry services.  We looked at landing near the harbour head but the receding tide had left some evil looking mud, so settled for a slip near the yacht club which also has a signboard about the Argyll Sea kayak Trail; this being a prominent stop on the trail.  You can buy shellfish direct from the processor at the top of the ferry slip, so all in all a good place to pause!

We couldn't see where Donny had landed in his F-RIB, he seemed to have disappeared.  The mystery was solved when he strolled around the harbour to meet us having blagged a berth on the best pontoon in the marina - for free - for a couple of hours stopover!

We wandered into town (don't expect a metropolis!) and settled on the excellent Cafe Ca'Dora for second breakfast.  We were just in time before breakfast serving turned to lunch serving and enjoyed an outstanding "Full Scottish" accompanied by great coffee - Cafe Ca'Dora is rated as 12/10 as a sea kayaking food destination by us! 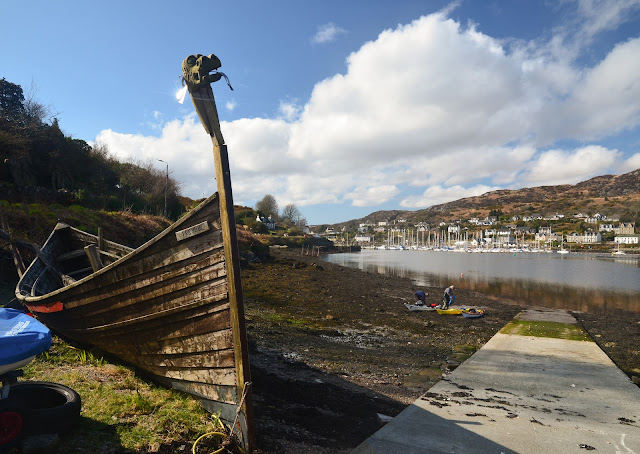 We returned to the slipway and whilst repacking our boats took a closer look at this graceful craft beached at the top.  She's the "Freydis", a 40ft/12 metre replica Viking longship built by volunteers in Tarbert to take part in the annual Loch Fyne Viking festival.  Named after Freydis, daughter of Erik the Red and sister of Leif Erikson, who has various claims to fame in the Norse sagas as an explorer, not all of them savoury!

Sadly, Freydis has seen "better days"; some of her planks are sprung and she'd need some TLC to be seaworthy again, but what a fine Fyne vessel! 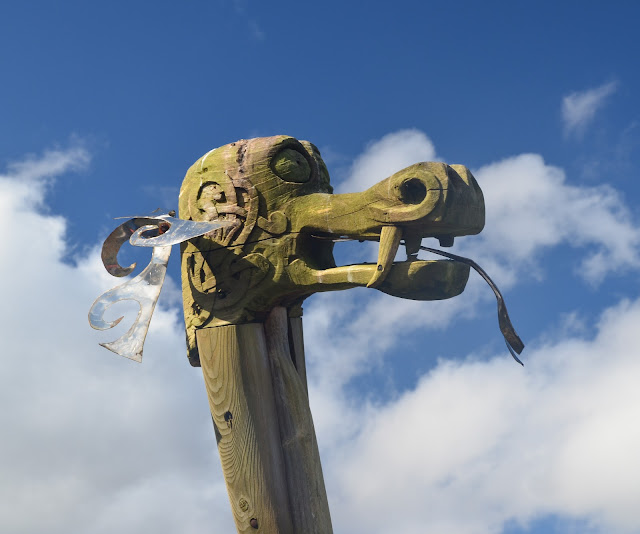 Freydis' dragon prow is particularly impressive, carved from a single piece of wood and adorned with metal "scales" and a fearsome tongue....now, I wonder what a scaled-down version of a dragon prow would look like on a sea kayak?!
Posted by Ian Johnston at 11:32