A noisy morning and a quiet day 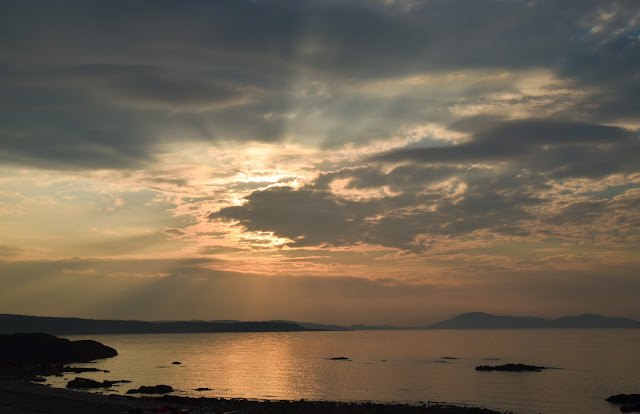 I slept fairly well at our first camp site, but only until the first hint of light.  the clear, fluting song of a Blackbird singing solo was the start of the dawn chorus, and was a strikingly beautiful sound in the quiet dawn.  What was neither beautiful or quiet were the many geese, a Raven, a Pheasant and several Oystercatchers who joined in soon afterward, a more discordant dawn chorus would be difficult to imagine!

No matter, it was a lovely morning when we emerged from the tents, and surprisingly there was absolutely no condensation on the tents or the ground - quite unusual for this time of year.  The sunrise was a slow and stately affair, the forecast for overcast and hazy but warm conditions looked pretty accurate.  I never underestimate the privilege of waking up in places like this....we were less than 60km/40 miles from the very centre of Glasgow, Scotland's busiest and most populous city and yet we might have been in another world. 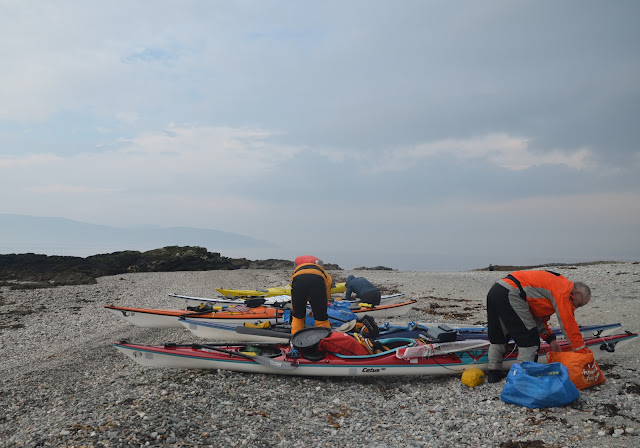 The party would split here; Douglas and Mike would head back to Portencross on the Ayrshire coast, Donny would head off to explore in his F-RIB with the possibility of joining up with us later in the day.  Raymond, Allan and I would head back north into Loch Fyne.  It had been great to catch up with everyone - I've so missed these journeys with good friends during the pandemic. 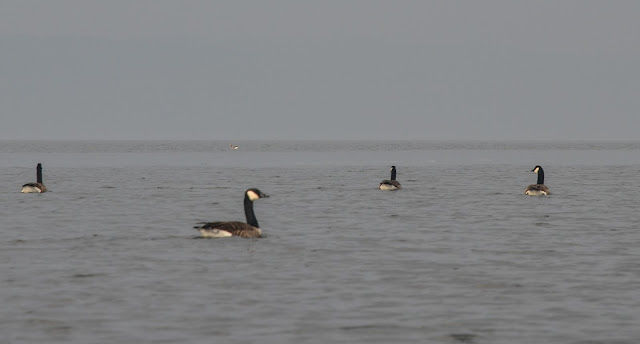 As we paddled back up the west side of Inchmarnock we were accompanied by the noisy neighbours; a flock of Canada Geese and small groups of Greylag Geese.  They allowed us to get fairly close, then splashed their way airborne in noisy indignation to land just ahead and repeat the process - why they didn't just fly around behind us I've no idea! 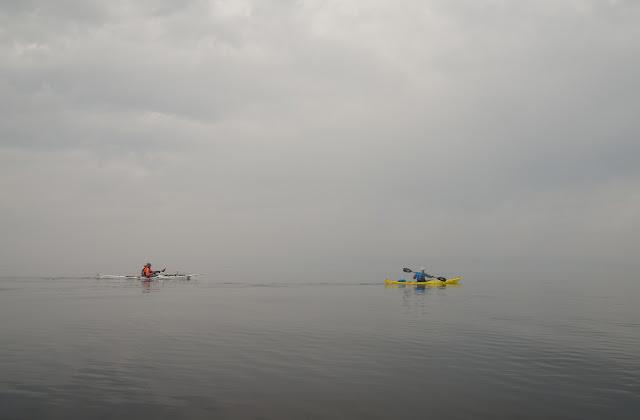 This was a strange day of weather; neither cold nor warm, calm with absolutely no wind, dry and with soft-focus light.  I'm sure that the conditions subconsciously affected our pace and energy - we all remarked on being a bit lethargic during the day. 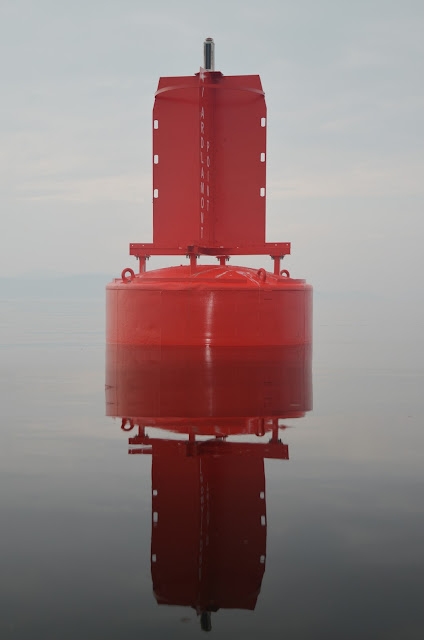 At the mouth of Loch Fyne the Ardlamont buoy sat on top of its reflection, perfectly still 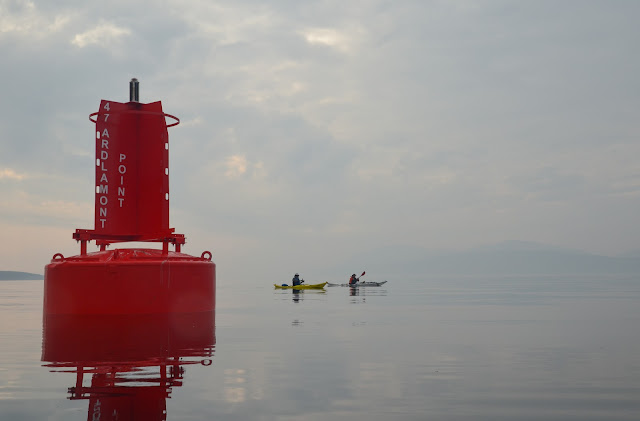 I'd had a very distant view of dolphins - which Donny later confirmed as Common Dolphins.  For some years a lone Common Dolphin nicknamed "Kylie" (as he frequented the Kyles of Bute) had made a permanent home near the buoy and had, it seems, been able to communicate across a species boundary with Harbour Porpoises but there was no sign of him when we paddled past. 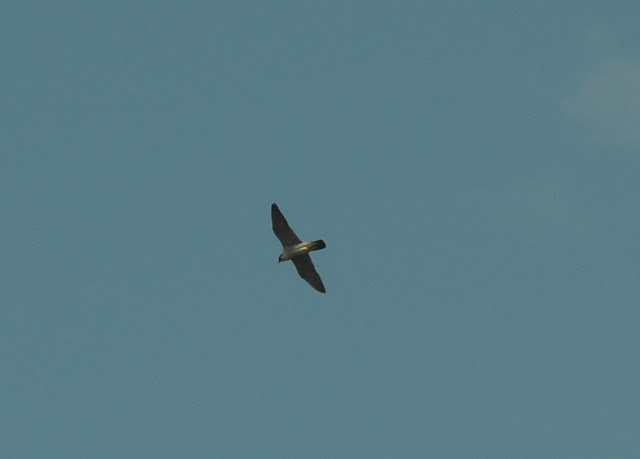 Near to Ardlamont Point we heard a familiar high pitched chatter and looked along the cliffs to get a great view of a Peregrine Falcon (Falco peregrinus) arcing out over the water before returning to the crags - a really lovely sight. 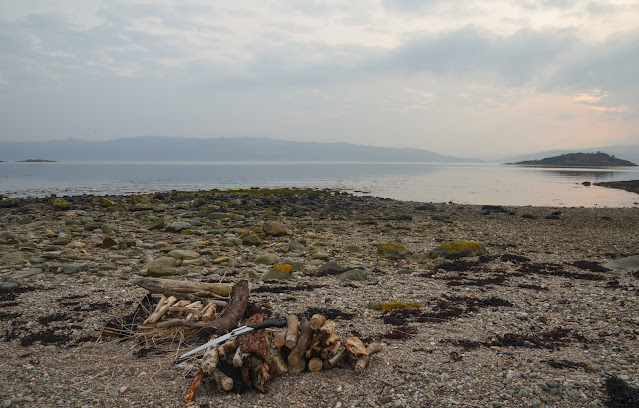 I got quite tired paddling during the afternoon, maybe out of practice, maybe the strange weather, and took almost no photographs.  We trimmed our plans to head right up into Loch Fyne and instead headed to a beach recommended by Donny as a potential camp site.  Arriving mid afternoon after meeting up with Donny gave us plenty of time to select the best spot and to gather driftwood for our evening fire. 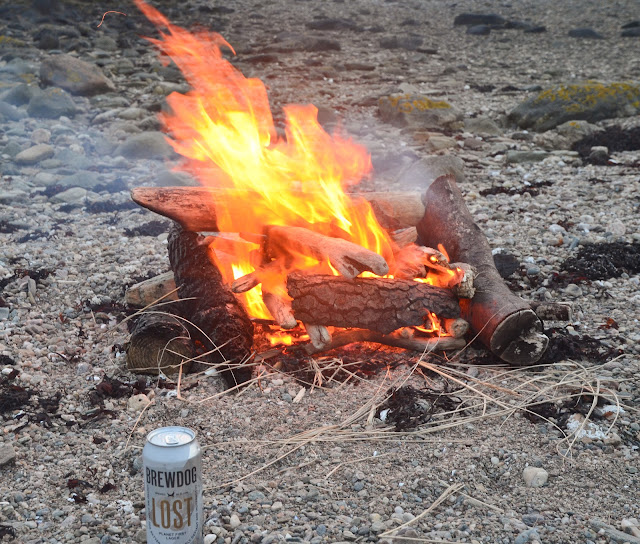 The wood was very dry and lit immediately, soon developing into quite a hot fire.  Purists can relax, the apparent proximity of the can of Brewdog sports recovery drink to the fire is an effect of the camera - the can (chilled in a nearby burn) was well out of range and no Brewdog was harmed during the making of this blog post. 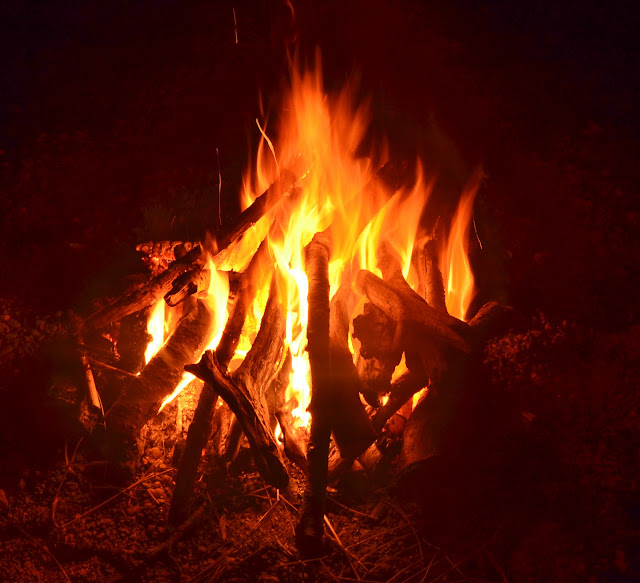 Dinner was Allan's excellent Venison Casserole, eaten around a fine fire (a Fyne fire?!).  All of us were tired and we headed to the tents pretty early with the promise of another fine Fyne day to come.
Posted by Ian Johnston at 19:43