The end of a fine Fyne journey 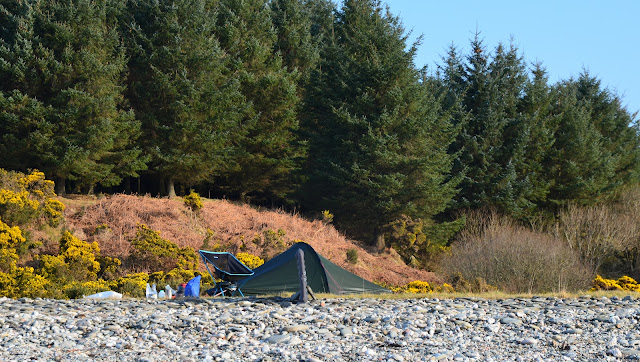 I woke to birdsong and warm sunshine at our camp near Ardlamont Point.  We ate breakfast while enjoying the sights and sounds of the place. 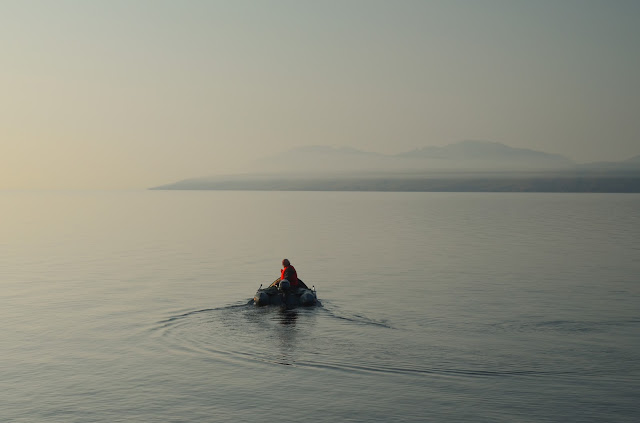 Donny left earlier in his F-RIB than we did in our kayaks, he wanted to get back to the launch point at Kames at a relatively high tide which would considerably reduce the carrying distance with his boat, kit and outboard engine.  It had been great to do another trip with Donny; his film of the journey is here. 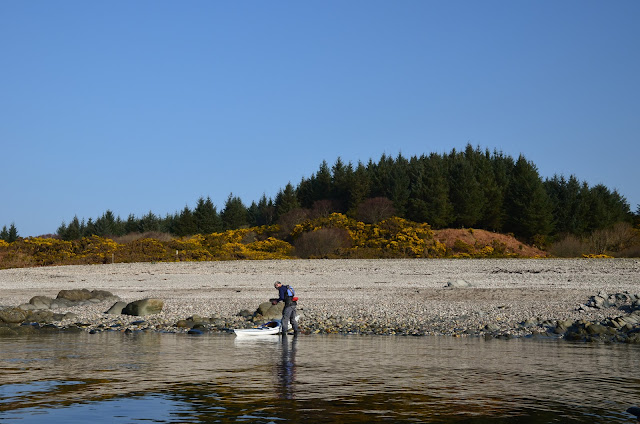 After a leisurely breakfast while waiting for the dew to dry off our tents we packed up too and got underway.  We erased all trace of the previous night's fire, which was lit below the Spring high water line.   There was remarkably little plastic washed up here; it's possible somebody has carried out a beach clean.  We scoured the length of the beach and removed the few bits of plastic bottles and a fish-farm feed bag to take away with us. This beach makes a fine camp site, it's one we'll return to in the future. 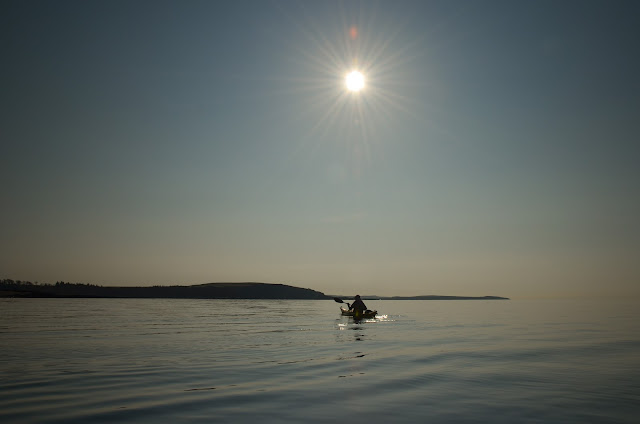 The paddle back to Kames was remarkable for the very warm and still conditions we experienced.  We sweated profusely even at a slow pace of travel - in March!  We returned to our launch site late morning and packed up - it was the end of a fine Fyne journey.

Our journey to Inchmarnock and around lower loch Fyne had been comparatively short in distance - we travelled 64km over two half days and two full days, but had been packed with good things, the most important of which was getting out on a multi-day trip again with good friends and in a great location.  The weather had played a big part in the trip and had encouraged us to arrive at camping spots in the mid afternoon rather than cranking out distance; it was a routine which worked very well.

Ordnance Survey 1:50K Landranger maps 62 (North Kintyre and Tarbert) and 63 (Firth of Clyde) cover the area in which we paddled.  We launched from the concrete slipway at Blair's Ferry where there is parking for several cars across the road from the slip.  The slip itself was built during the Second World War for operating landing craft in preparation for the D-Day landings.  The car parking is on concrete slabs which were the vehicle muster and turning area and the imprint of the I Corps insignia can still be made out, pressed into the concrete ramp.

There are no significant tidal streams to be concerned about on this trip, but Ardlamont Point and Inchmarnock can be difficult places to paddle in strong wind, being exposed to most wind directions.  Ardlamont Point in particular can be a challenge.