In the "white room" 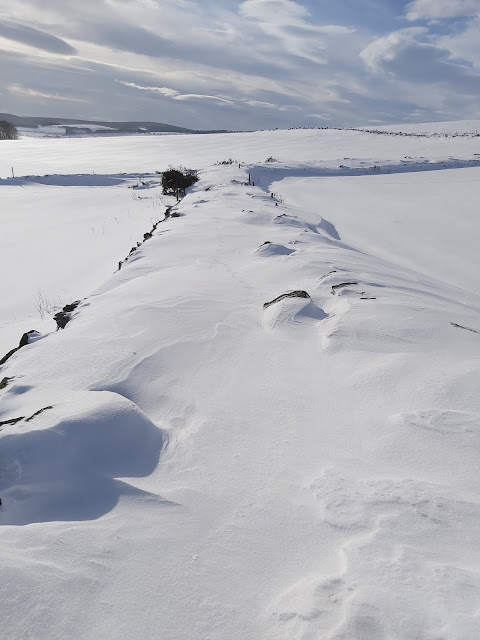 When the snow here in Aberdeenshire was at its deepest, I set out straight from my house on a ski tour across the fields with no definite destination in mind.  The forecast was for strong winds later in the afternoon but I hoped to be back off any higher ground before that as the unconsolidated snow would be blown around quite a bit.

The depth of snow cover was immediately apparent, this large drystone field boundary is 1.5 metres high and 2 metres across and I was able to ski comfortably along it. 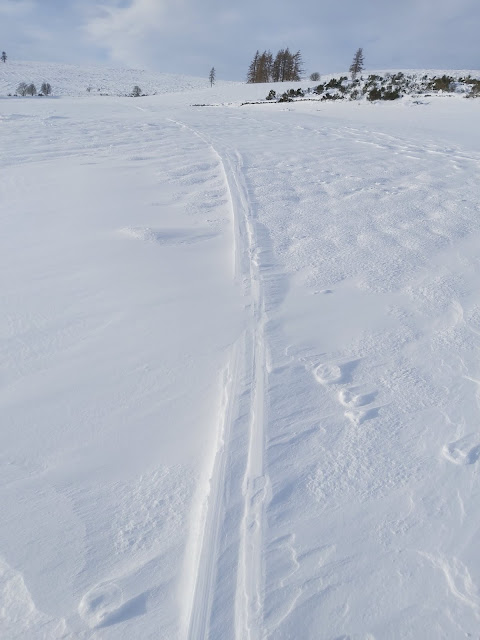 In the higher fields the wind was a strong breeze which had already been at work on the snow - one of our neighbours had been up this way a day previously and his tracks were clear on the surface.  The raised effect is a result of Les skiing through powder snow and compacting it where his skis passed; the wind has then removed the loose snow from the area leaving the compacted ski tracks raised on the surface. 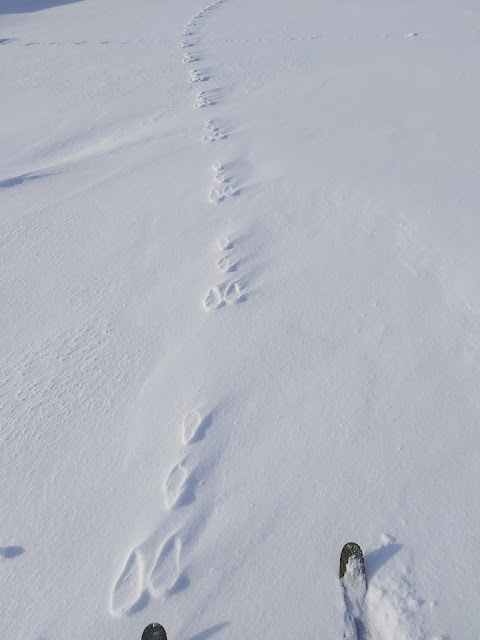 Not just human tracks either; the trace of a Hare was absolutely plain on the surface of the snow - a sort of Strava for beasties! 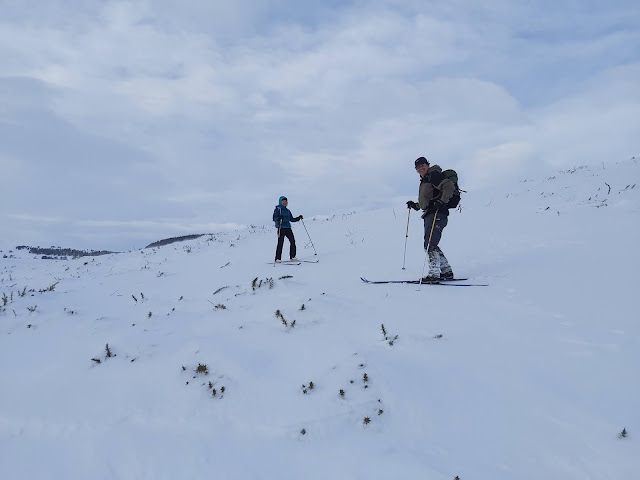 Getting to the top of the fields brought two obstacles, first a barbed wire livestock fence which was mostly buried in snow, then immediately above that a 3 metre high deer fence enclosing a new forest.  I was able to step across the barbed wire, but needed to climb over the deer fence.  This presented a bit of a problem; stepping out of the ski bindings landed me chest deep in the snow!

Having climbed the fence, getting back onto ski was a real challenge, more akin to re-entering a sea kayak from the water.  Eventually and with the aid of the deer fence as a climbing frame I managed it, but have since added one of these to my ski touring kit for just such a situation.

Heading up into (or rather over) the plantation, I was surprised to see two other skiers appear from the whiteness above.  James and Linda are locals who share most of the same interests as me, and who ski...lots!  They reported that the wind on the Correen ridge was very severe and that they'd modified their planned route to stay below the skyline and out of the worst of it.  This was useful information and informed what my plans might be. 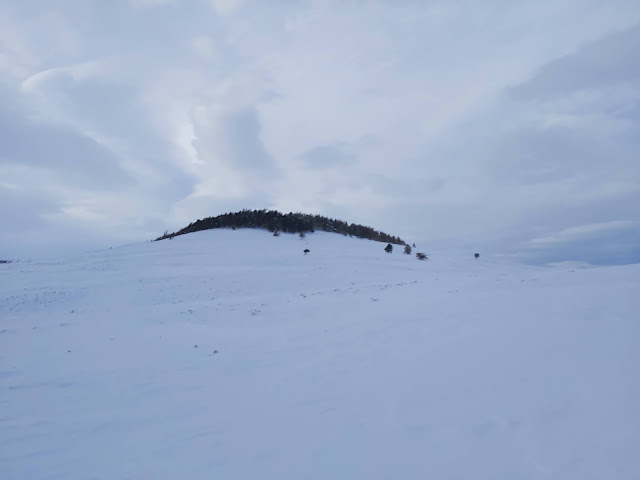 I decided on making Manabattock Hill my target; a hill of just 419m/1375ft and less than 3km from my living room.  The ground between the nearby Cranniecat Hill and Manabattock has been planted with small conifers and the preparation has left the ground really difficult to cross on foot.  Not today though, it was mostly a smooth cover of snow.

I zigzagged up steadily, finding the best lines to suit my fishscale base XC skis and made good progress.  I was conscious that it was getting windier and mindful of the forecast but things were looking good for a pleasant tour and my thoughts turned to a swift descent.  When the wind really got cold I pulled on goggles and battened down my outer layers....and was glad to have done so.

The wind increased quite rapidly and within minutes there was a lot of blowing snow; this vortex leaping off the hill was particularly impressive!
Towards the top of the hill it became apparent that the wind was now very strong.  I pushed on up but just at the crown of trees which top the hill found myself in the "white room" - where the groundstorm reduced visibility to almost zero.  I could no longer distinguish the slope aspect and was losing sight of the tips of my skis for minutes at a time.
At just 250 metres above and less than 3km from my house, I found myself in a real battle with the conditions.  The trees were straining in the wind, I was being knocked about and had almost no visibility.  Despite the ferocity of the conditions and the strength of the wind, I stayed comfortable inside my shell clothing, but the margins for error were very thin here.  My internal alarm started sounding - this was no place to be in these conditions.
All thoughts of that swooping ski descent were literally gone with the wind; as I couldn't see the slope aspect in the driving snow there was no safe way to turn downhill and let the skis run.  Descent was mostly an inelegant side-slip and I was grateful that my back-country style skis have metal edges which assisted a degree of control.  Back on more level ground I was able to return to a semblance of kick-and glide but right down the fields to home the wind remained strong and the drift quite severe.  A veil should be drawn over my climbing of the two top fences, a lateral distance of 10 metres which involved over 20 minutes of wading/swimming through a deep drift and some salty language.....
For all  the effort and the ferocity of the weather, it had been a great outing; I learned some more about ski touring and gained some useful experience XC skiing in the "white room"!