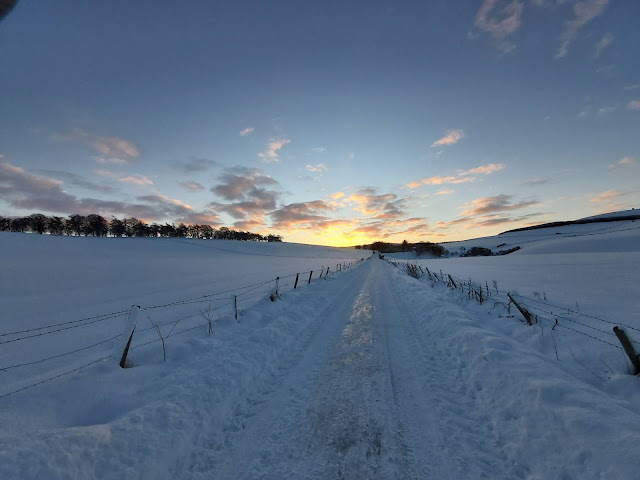 Over a week of heavy snow has left much of Scotland under a thick blanket of snow.  Here in Aberdeenshire we've measured an even cover of 54cms/21 inches, mostly unconsolidated as the temperatures have been so low. 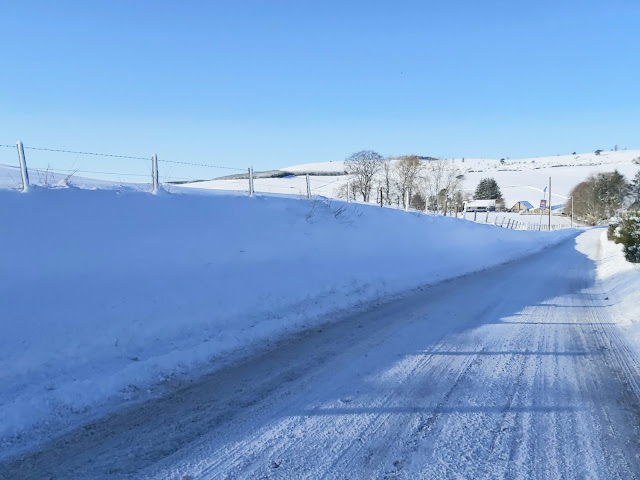 The drifting has been quite spectacular on higher routes and even at lower levels the quantity is remarkable.  This part of Scotland is one of the snowiest, and February has a reputation as a snowy month but the present amounts are unmatched for ten years.  Mobility has become a challenge.... 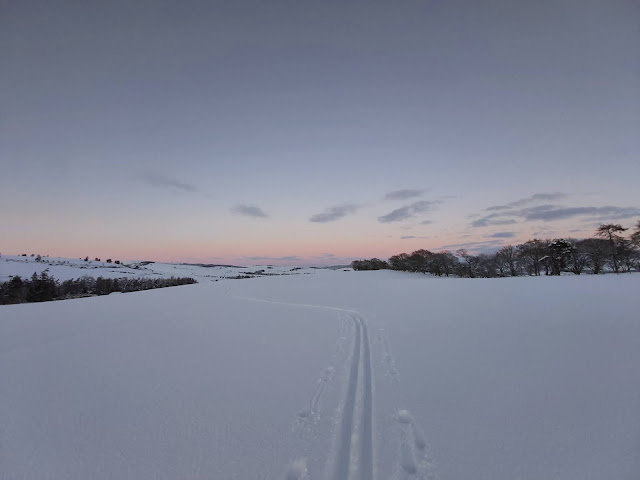 ...unless of course you can adapt your mode of mobility! The quality of light in the very low temperatures, particularly around sunset,  has been really special. 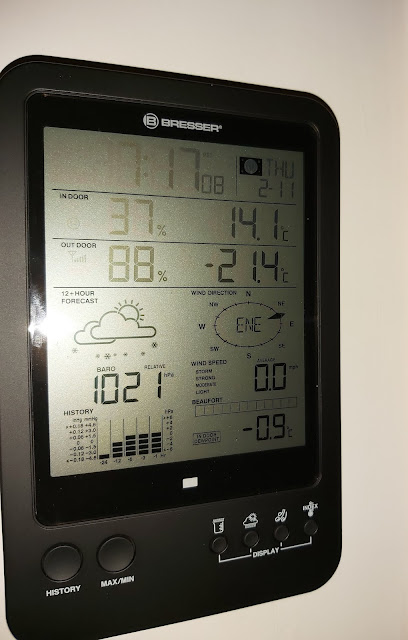 The night of 10-11 February was exceptionally cold.  Just after daylight we registered -21.4 Celsius on our weather station and nearby Braemar recorded -23C.  This makes it the coldest February temperature since 1965, and the lowest temperature of any night since 1995.  To put it into context, -21C is four degrees colder than the inside a domestic freezer!

Stepping outside in the morning was to step into a gripping chill.  Fingers exposed for more than a few seconds became painful and unresponsive.  Many vehicles wouldn't run because the winter engine coolant which is commonly used here may not be quite extreme enough, or because diesel fuel has become waxy. 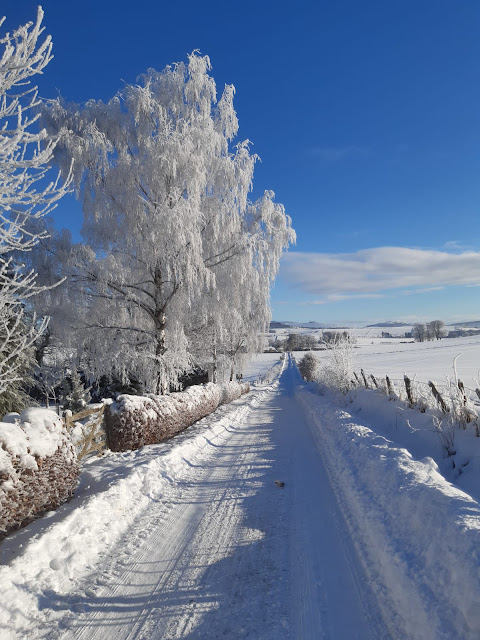 Image courtesy of Alastair Murray
Extreme as the cold has been, it's so beautiful.  The frost has been so intense that the crystals are the size of small postage stamps, panes of crystal brilliance.  Trees have become works of art in this white world.

Look carefully and there's beauty everywhere; a strand of barbed wire on a fence has become a twisting string of the most delicate crystals. 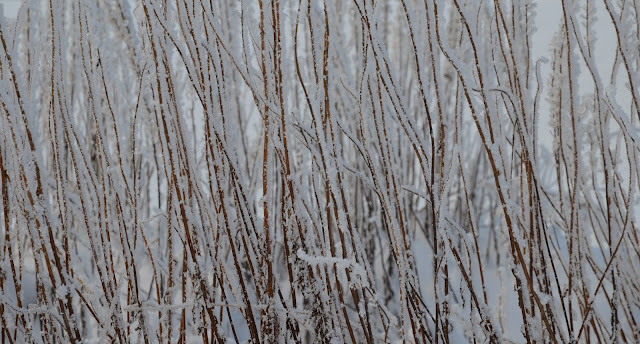 The frosted stems of last year's Rosebay Willowherb are now a piece of abstract art. 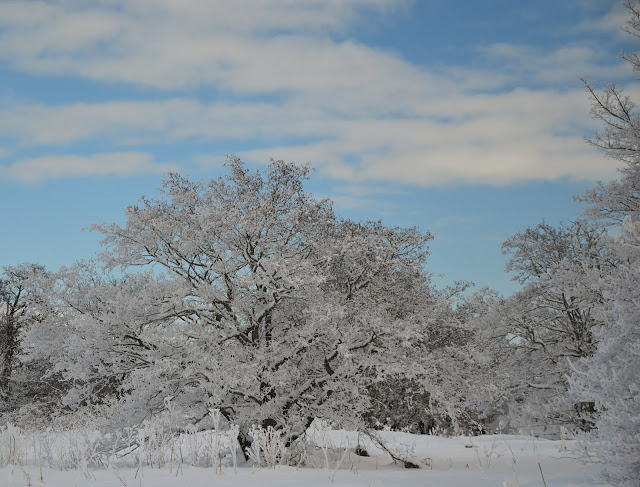 At the edge of the River Don, the white world seemed even more intense, the air completely frigid to the point that any exertion caused the throat to burn as cold air was inhaled.  Here the trees were frosted to a depth I've not previously encountered, it was like white fur. 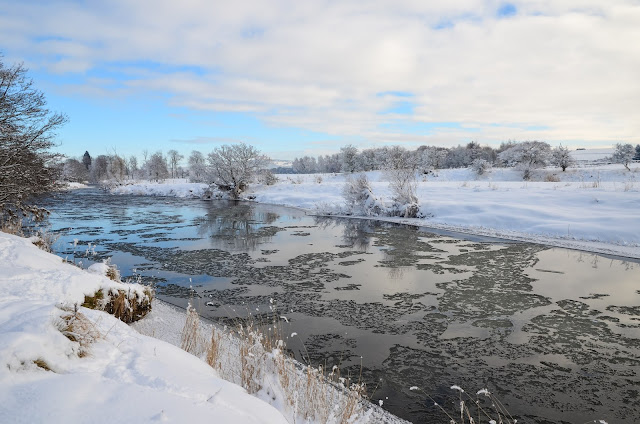 Ice floes have formed on the sides of the river and the water itself has partially frozen, a rare sight in Scotland. 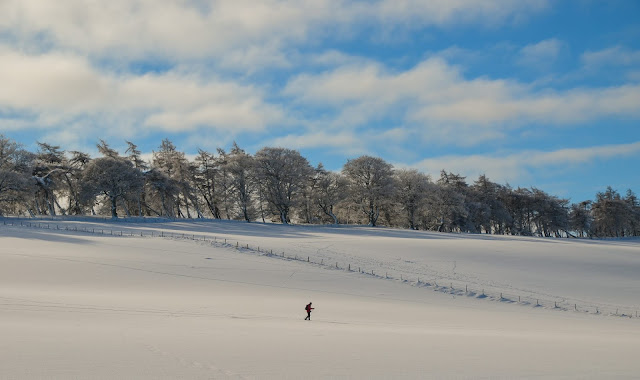 The fields which in late summer are a golden bounty of ripe barley have become white sheets of deep powder snow; crossed with the evidence of animals which normally would go unnoticed. Many folk here own XC skis and we've had more use out of them in the last 20 days than perhaps in the last 20 years! The opportunity to ski right from the front door and make long tours has been most unusual.
The build-up of snow may have reached a peak and the extreme temperatures are due to moderate over the coming days.  The conditions are certainly causing difficulty for many, but this white world is certainly dazzlingly beautiful.
Posted by Ian Johnston at 21:07