Time and tide - heading to Jura

My spell of several months working away was finally over. Douglas and I had discussed various trips by email through the preceding couple of weeks - everywhere from the far north to the south west of Scotland - but as ever our planning would be informed by the weather.

A large high pressure system rooted over the UK gave us a great opportunity to explore somewhere exposed and remote, but there was the complication of strong westerly winds in the days before the high pressure calmed things down. After considering various options we settled on an exploration of the west coast of Jura, one of the large islands of the Inner Hebrides.  You'll be able to follow our adventure in "Sea Kayak Stereovision" by reading Douglas' account starting here.

Planning for any trip to Jura is complex.  The island is surrounded on threee sides by water with fast tidal streams, including the notorious Gulf of Corryvreckan to the north.  The only coast with relatively beningn tidal streams is the exposed, wild and uninhabited west side of the island.  All this meant that our usual two texts and a phone call wouldn't suffice at all!  Time and tide would be critical for almost every stage of the journey we intended to undertake.  Our planning remained flexible and as it turned out we altered our plan significantly during the trip.  Our initial plan was for a four day adventure leaving from the Argyll coast and heading anticlockwise around the north of Jura, right down the west coast to Islay and then back to explore the loch which almost bisects Jura before crossing back to Argyll.  We also retained a possible option of heading over to the island of Colonsay should conditions allow it. 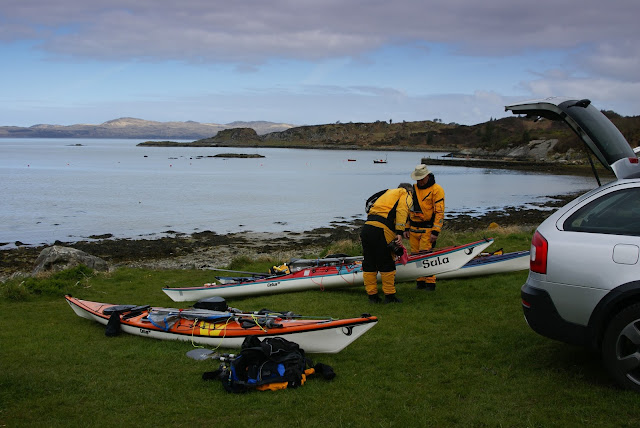 Our first time-critical element was a departure from the mainland in sufficient time to allow a transit of the Corryvreckan around slack water.  Douglas, Mike and I met up at Carsaig Bay near Tayvallich at mid-morning to pack the boats and prepare at a measured pace. 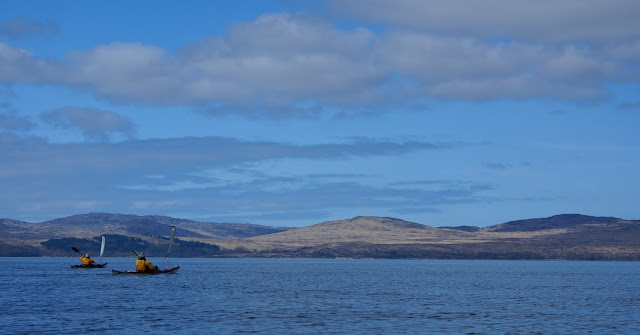 And then we were off - another adventure was underway!  Using the light breeze we started straight across the Sound of Jura in order that we didn't get caught in the main stream of the flood tide heading north up the channel - which had the potential to carry us well beyond Jura and would be impossible to paddle against.

The Paps of Jura dominate the view across the Sound - and if our plans were successful we would be on the opposite side of these fine hills two days later. 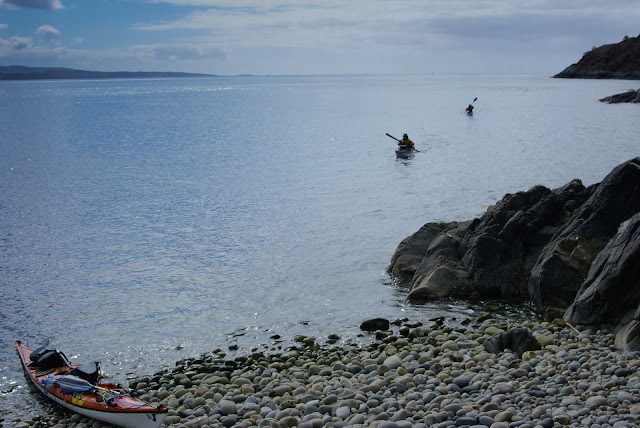 After a steady 8 km crossing of the channel we made landfall on Jura at a pebble beach to stretch our legs.  We could now afford to take our time as we had a couple of hours to wait for slack water in the Corryvreckan 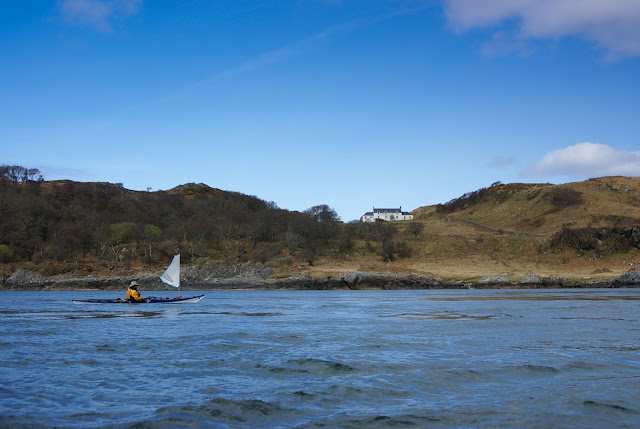 Heading north along the coast we passed the farmhouse of Barnhill. In 1946-47 an author named Eric Blair lived here while writing a novel, partly to improve his fragile health.  On 19th August 1947 Blair led a boating trip during which their boat was swept into the Corryvreckan and overturned.  Fortunately all of the party managed to scramble ashore to a rock where they were later picked up by a passing fishing boat.  Blair is better known by his nom de plume, George Orwell, and had he perished in the Corryvreckan the modern literary classic "1984" would have been lost with him. 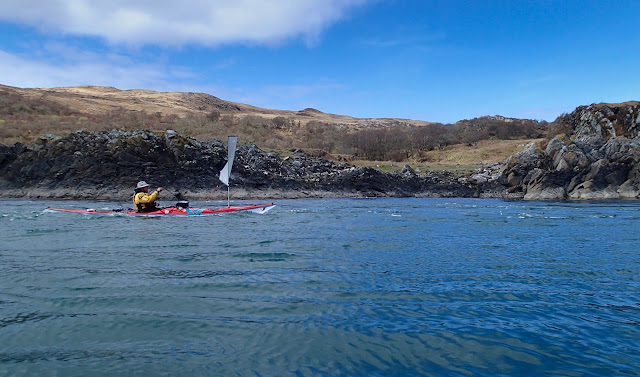 The flood tide ran north at full pelt and with a breeze behind us we fairly belted along at 14km/h. 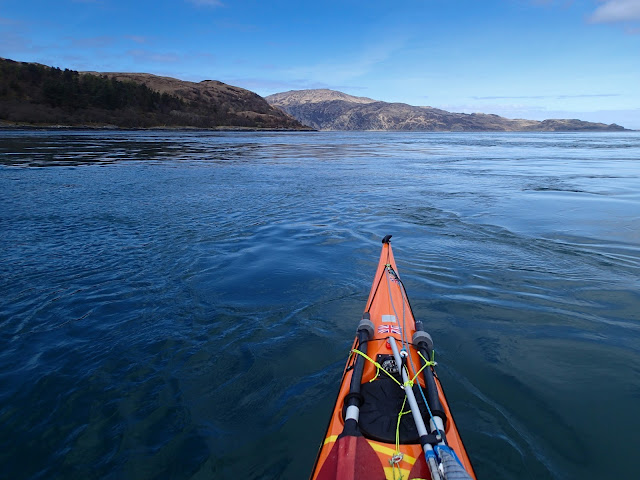 In order to retain control over when we entered the Gulf of Corryvreckan it was necessary to break out of the main stream and into slower moving water close inshore where boils and swirls marked the surface. 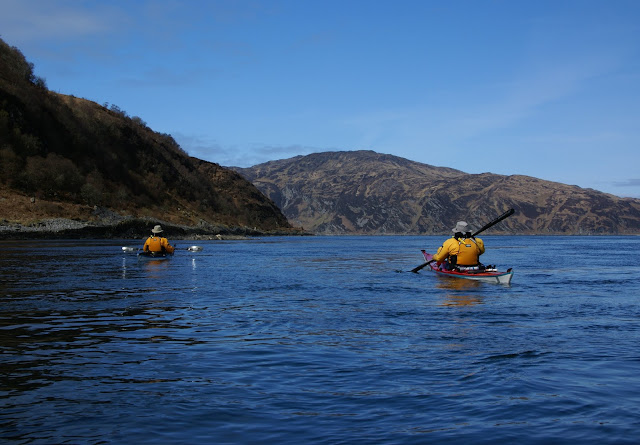 It was quieter here and we drifted along for a while as the island of Scarba grew closer, marking the left turn into the Corryvreckan strait. The nearest headland is the point where we needed to get off the water to wait for the strength of the flood to subside prior to attempting the Corryvreckan. 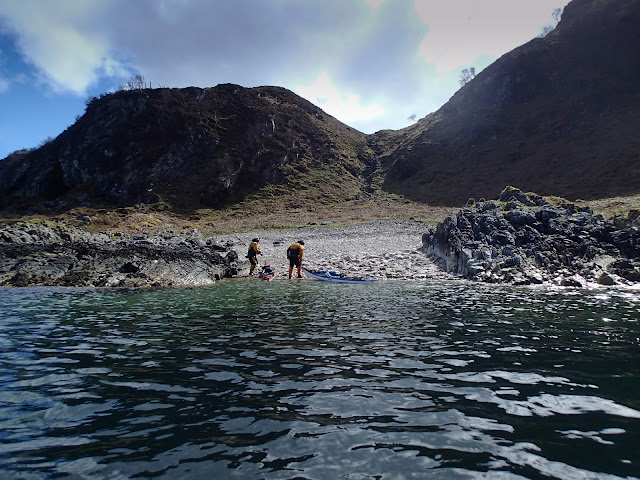 The tiny pebble beach at Port nam Furm provided an easy landing and we set up our lunch things in the sun to watch the changing face of the sea as the tidal movement continued running into the channel between Jura and Scarba.  Very appropriately, the name Port nam Furm translates as Port of the Seat.  Clearly we were the latest in a long line of mariners to sit here and wait for the right conditions before entering the Corryvreckan.  An alternative translation might be Port of the Last Chance!

While we drank coffee in the pleasant sunshine an Otter fished across the bay in front of us, coming really quite close to inspect the boats on the shore.  Gradually the speed of the flood reduced towards slack water at a little after 1600.  By 1525 we were ready to get back on the water to take advantage.....
Posted by Ian Johnston at 09:39