Corryvreckan - "a depe horlepoole quhairin if schippis do enter thair is no refuge but death onlie".....

At 1525 we launched from Port nam Furm to make our transit of the Gulf of Corryvreckan, intending to take advantage of the slack water period as the flood tide subsided.

This narrow channel running between the islands of Scarba to the north and Jura to the south has a fearsome reputation - the quote in the title of this post is from a 16th century "rutter" or pilot book compiled by Alexander Lyndsay, the pilot on James Vth's voyage around his kingdom.  In the days of sailing ships the Admiralty Pilot warned against attempting the passage and even today in the age of powerful vessels and GPS, the current Admiralty West Coast of Scotland Pilot states that it is "very violent and dangerous" and that "no vessel should attempt the passage without local knowledge".

The Corryvreckan (speckled cauldron), third largest tidal whirlpool in the world, is only part of the problem.  Huge volumes of water pass through the channel on both flood and ebb tides, on the north-going flood the water pours up the Sound of Jura and is forced through narrow passages to the north and west, the Corryvreckan taking a significant part of the stream.  On the south-going ebb the process is reversed and water is forced through the channel from west to east.

The seabed in the channel approaches and the channel itself is very complex and accelerates the flow of water, producing tidal streams of up to 8 knots (16  kph).  A complicating factor is a pinnacle on the north side of the channel which rises from a 219m deep "hole" to within 29m of the surface, with a very steep face on its eastern side.  On the flood tide particularly, this topography combined with the speed of the flow causes a massive upthrust of water which surges past the pinnacle and sets up an enormous whirlpool with vortices spinning off downstream to the west.  If you then combine this dynamic water with a wind and swell from the western entrance to the channel, the resulting conditions can be truly elemental with standing waves of up to 9 metres and a roar which can be heard up to 20 kilometres away.

As we set out, we met the tour boat "Sea Leopard II" coming eastward from the channel.  As soon as he saw us, the captain throttled right back to minimise his wash - a courtesy we were grateful for; a wash in confused water can produce quite difficult waves.  The video embedded on Craignish Cruises website is an excellent explanation and film of the Corryvreckan - and if you don't fancy kayaking the strait then the Sea Leopard II would be by far the best way to experience the whirlpool and the wildlife of the area.  To get an idea of the power of the tidal stream at Spring tides, this video shows the RNLI lifeboat in the main flow.....

We were very cautious because from Port nam Furm it isn't possible to see what conditions are like in the Gulf itself.  We expected some swell from the west due to strong winds in the preceding days, so it would have been unseamanlike and foolish to have attempted the passage when the flood tide (3 days before Springs) was running strongly. 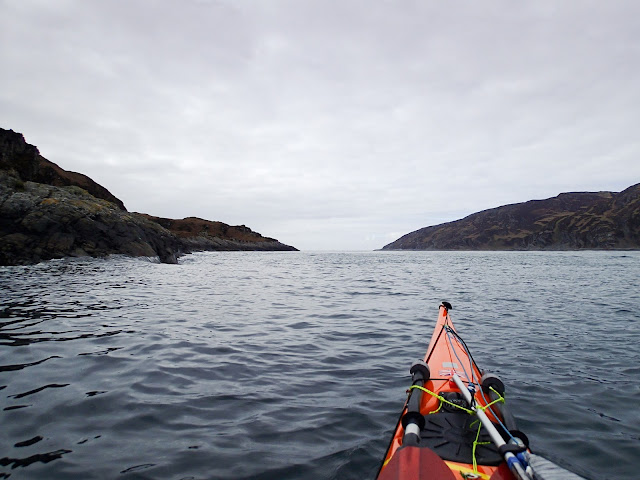 As we entered the channel and gained a clear view to seaward we were relieved to see quiet conditions and no breaking swell - it appeared that our prospects would be somewhat brighter than "death onlie" !  As if stage-managed, the sunny conditions were replaced with a grey cloud sheet as we entered... 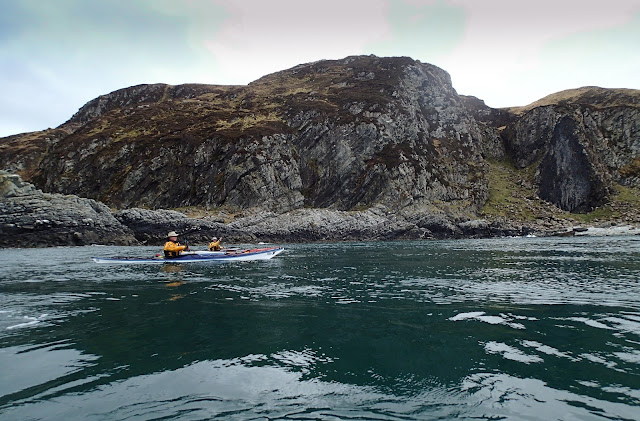 In the narrowest part of the channel the water was swirling and forming gentle hydraulic cushions, but our timing had been good and we passed through easily on slack water.  One factor in our planning of time and tide for this passage was that if we encountered nasty conditions at the west side of the Corryvreckan we could wait a short time for the ebb to build and push us back through the channel to safer water in the Sound of Jura. 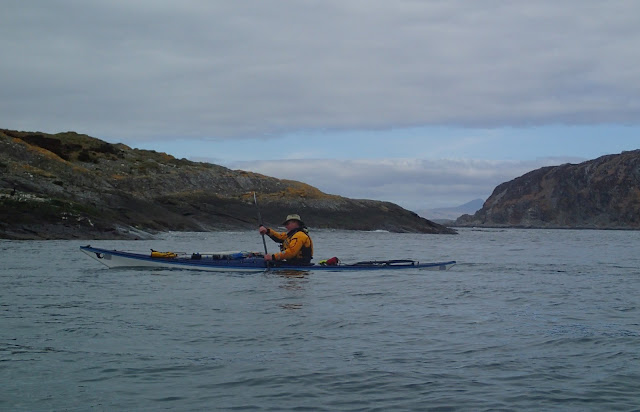 However, the timing needed to be calculated accurately - slack water lasts just minutes and the flow picks up very quickly.  By the time we reached the west entrance the east-going flow could already be felt and paddling became a bit more strenuous. 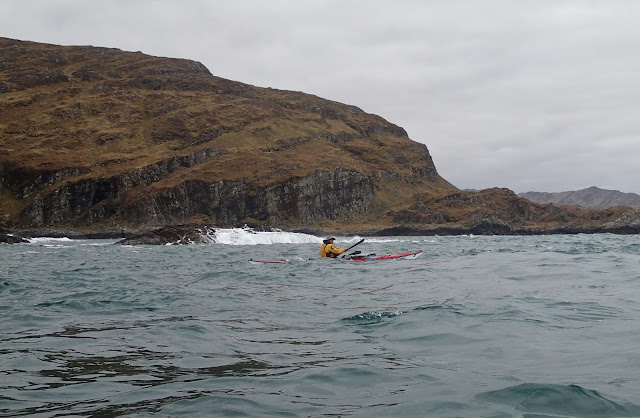 On the Jura side of the western entrance are a couple of small islands and skerries.  We passed inside Eilean Beag (little island) as the ebb began to really get started and had to PLF for a good 15 minutes to escape being drawn back through the Corryvreckan.  For a good five minutes we were paddling at maximum output but making good just over 1kph against the strengthening tide.  To see how strongly this section can run at full flow, the same bit of water is featured from the 9 minute mark in the HebrideanWild video. 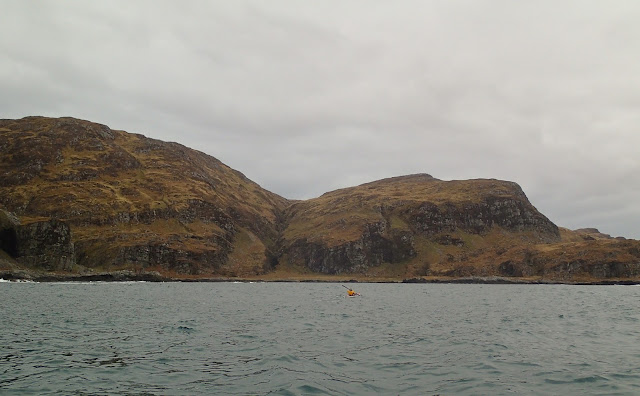 After a strenuous pull we won safely clear of the Corryvreckan.......the wild west coast of Jura was now ours to explore.