In the bleak midwinter - getting there


Weeks of gales, one frontal system after another piling in bringing stormy and cold conditions and giving no opportunities for sea kayaking. Walking days had been restricted to the lower hills whilst the high tops were swept by 100mph winds on an almost daily basis; all very frustrating. But then, a forecast of a lull for a few days, not perfect weather but suitable for a winter kayaking trip. The residual Atlantic swell would make any trip on an exposed coast uncomfortable, so we looked for sheltered options. A couple of emails and phone calls later, Douglas, Mike and I were heading west...

But first we had to get there. Often in winter getting to the put-in is one of the trickiest parts of the venture.... 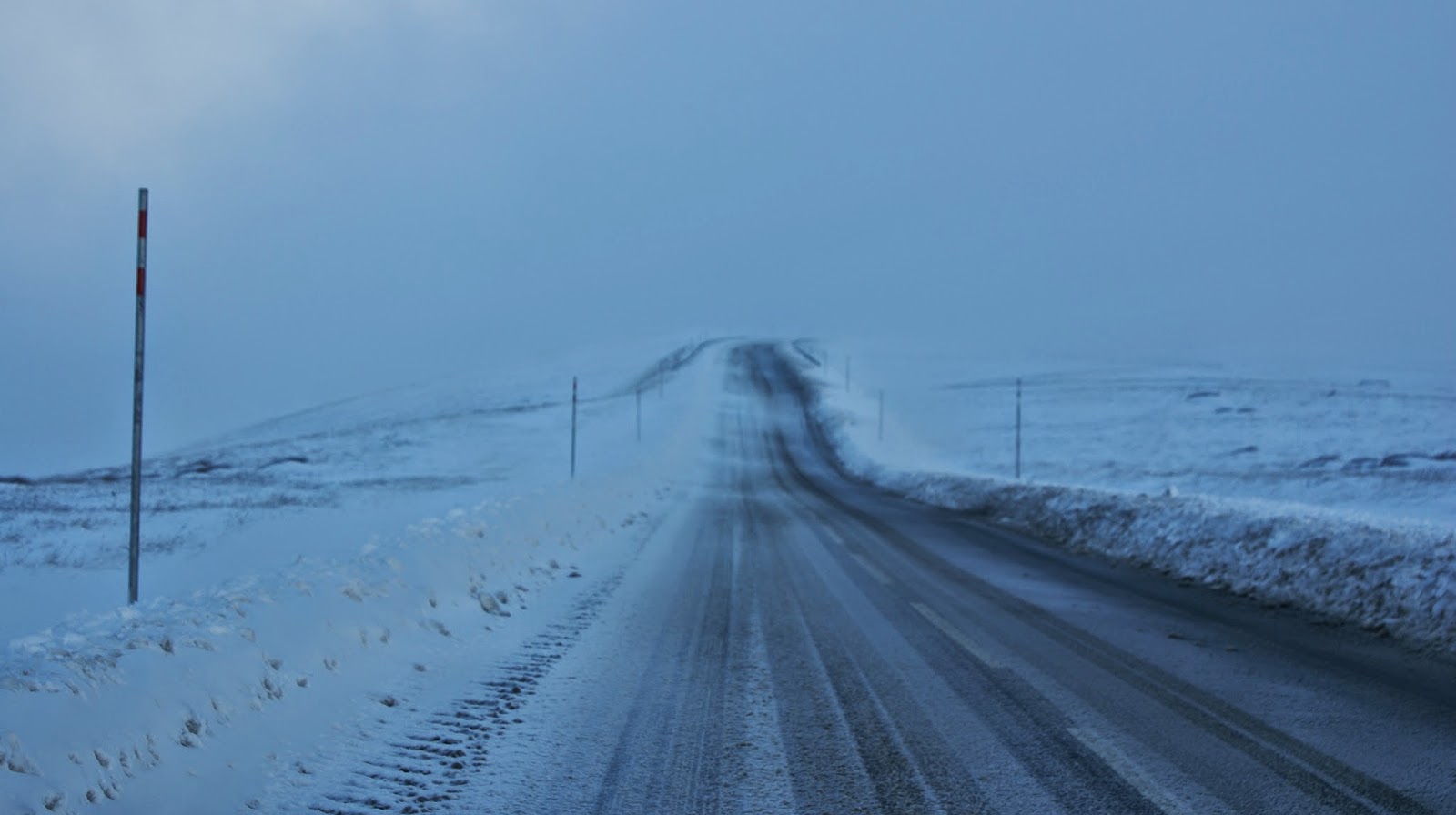 ...and it proved to be the case on this occasion.  Snow and then a deep frost gave very tricky road conditions as I crossed the spine of Scotland on my way west. 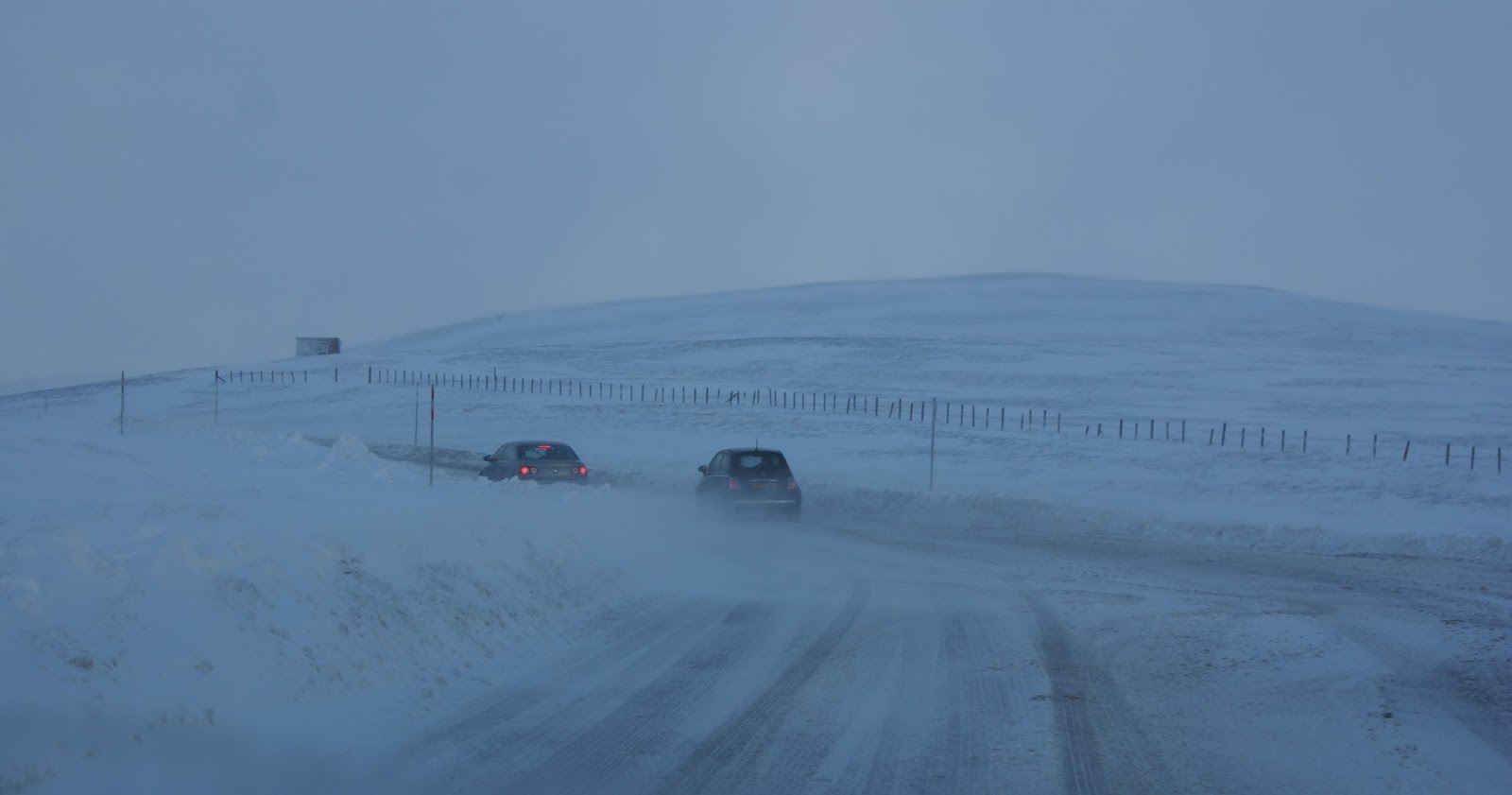 Many found the going more than tricky, cars stuck at various places on the infamous Lecht road, a regular feature on traffic bulletins throughout every winter.  With care I got through safely. 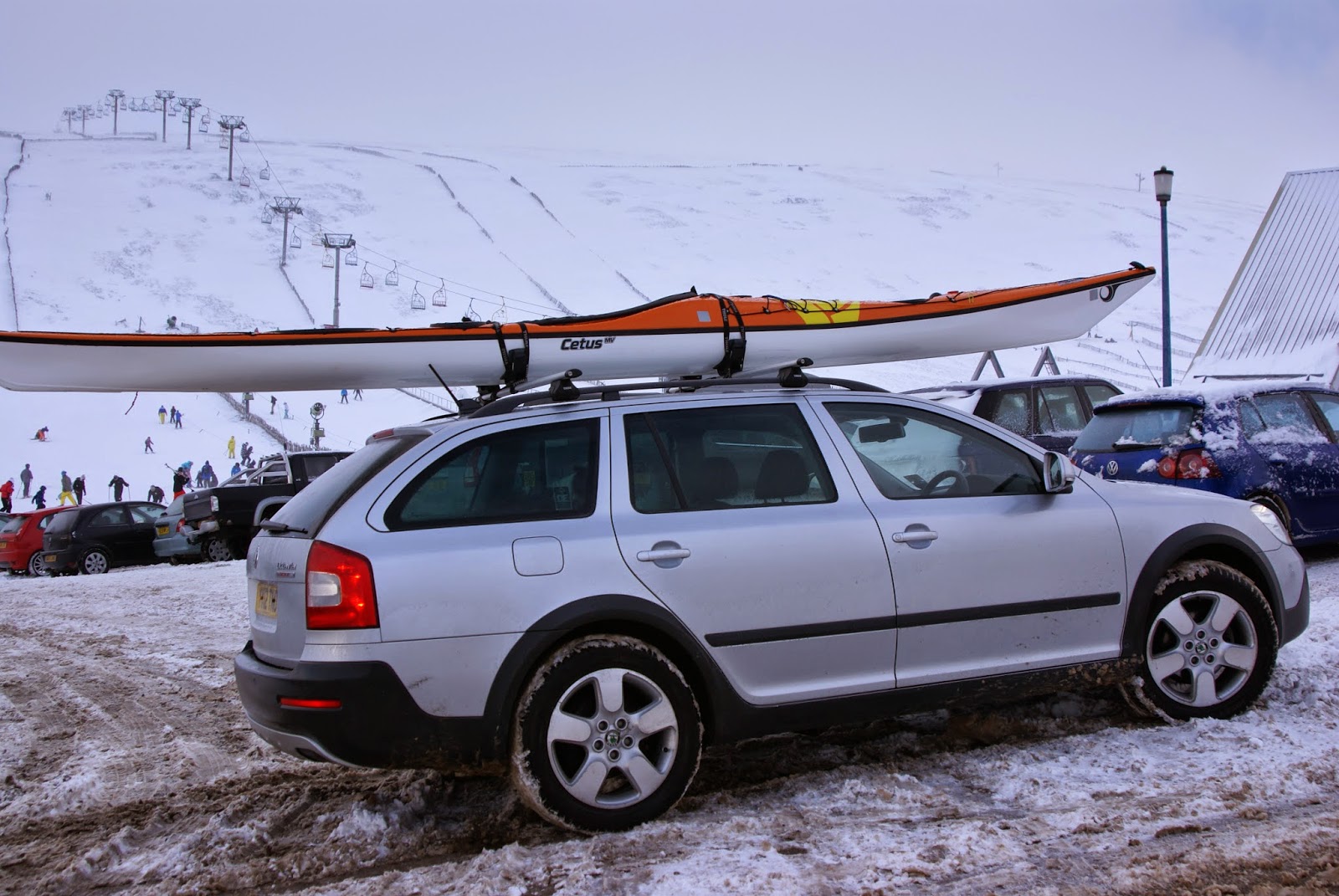 A brief stop at the Lecht ski area drew some puzzled glances - had I maybe packed the wrong choice of toys?!  I met up with Douglas and Mike at the very comfortable Ballachulish Hotel which was to be our base for the trip - it's not always necessary to "rough it" on a paddling venture!

We had arranged to meet early afternoon so that we could do a short hillwalk before dark, and it was to be a hill of some considerable significance 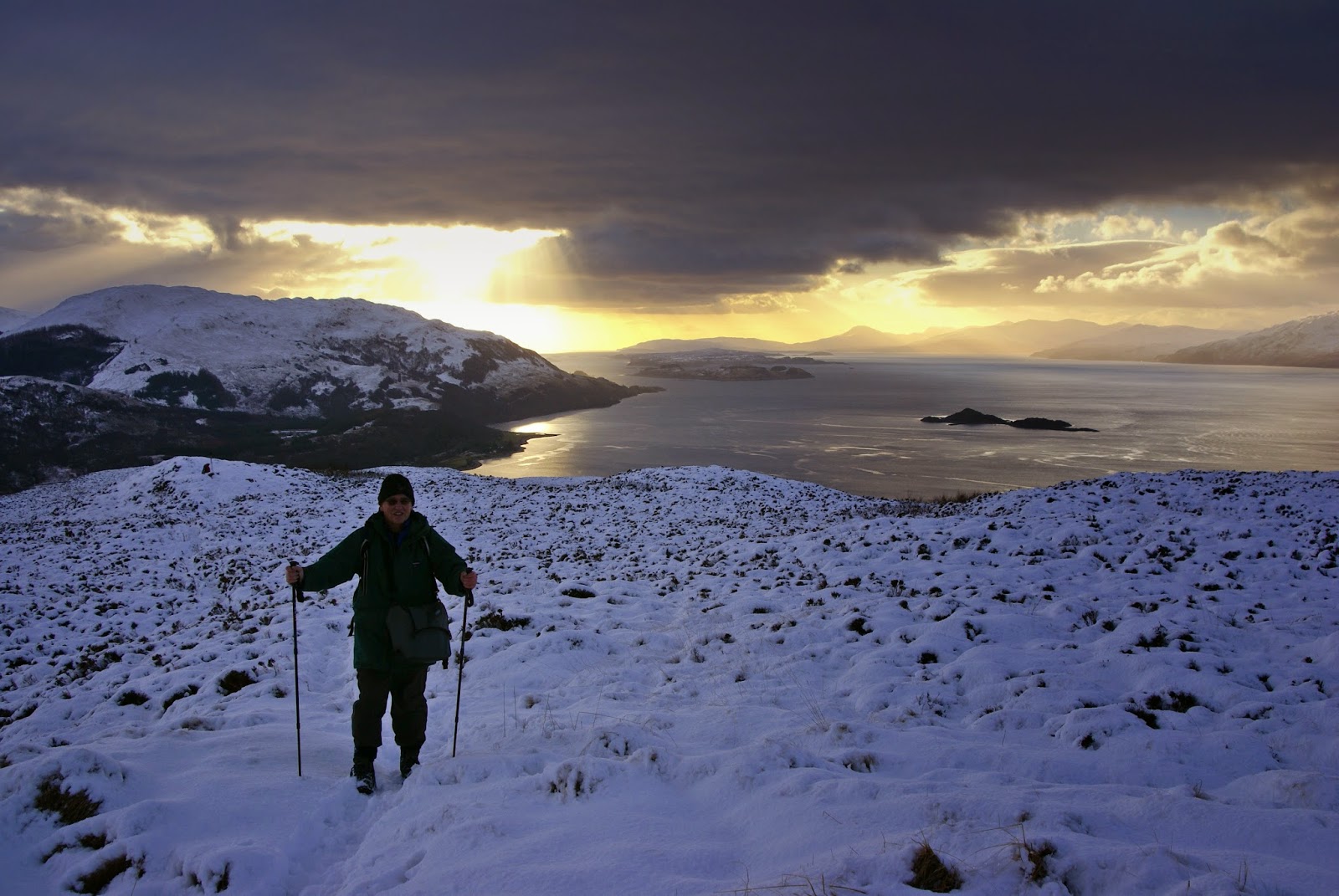 We chose to climb Ardsheal Hill, a "Marilyn" situated on the shore of Loch Linnhe.  At 263 metres/863 feet it gives a short climb with a view out of all proportion to height.  But the significance of this hill to us was neither the height nor the view.  After a series of major operations on both knees and on a shoulder, any one of which would have finished the outdoor adventures of someone with less determination, this was the first hill walk  Douglas has managed in a few years.  His smile was as wide as the view at achieving a return to the hills - he's most definitely "getting there"! Mike and I were absolutely delighted in being able share his successful ascent. 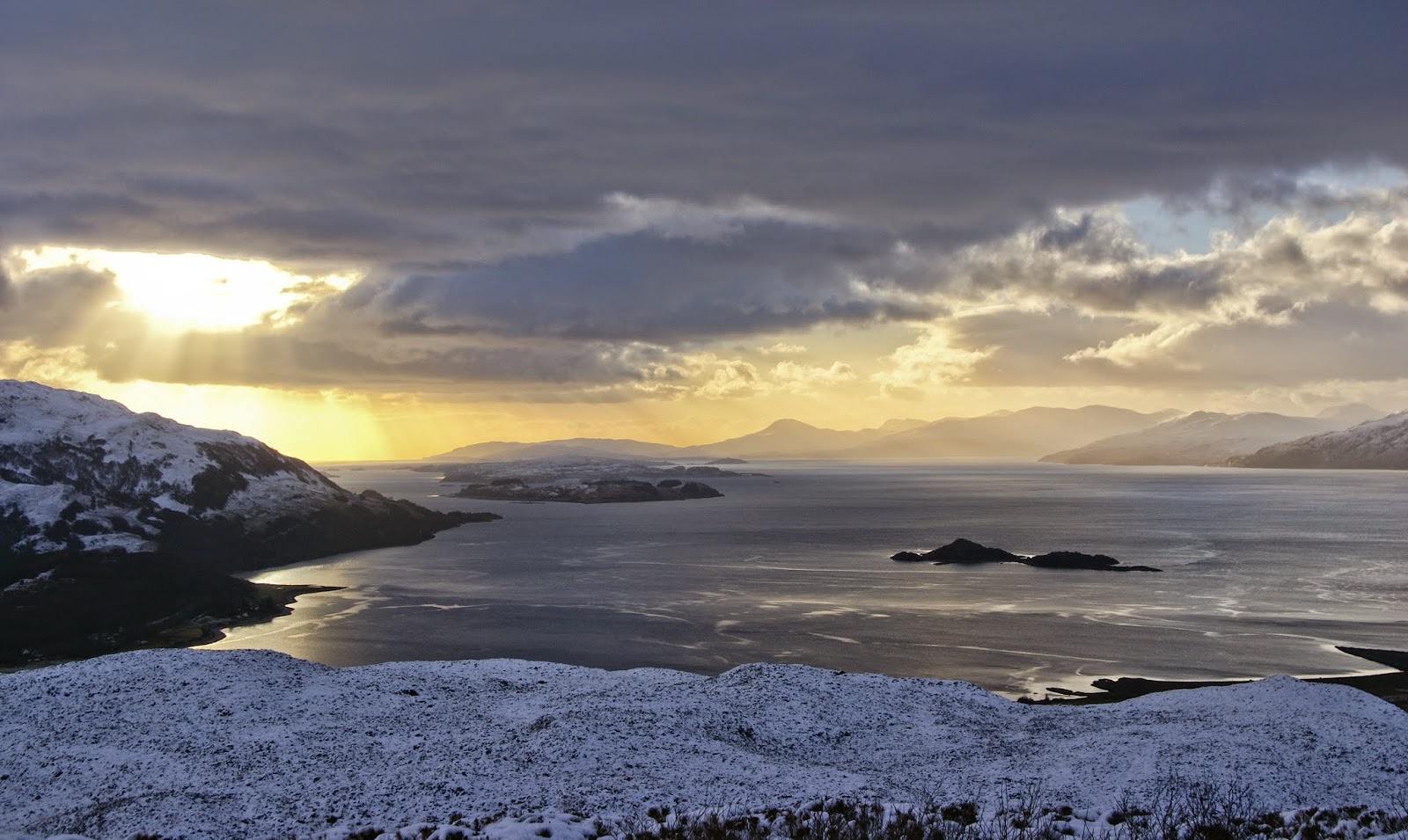 The view west from the summit of the hill along Loch Linnhe was superb, the forecast for the following day was great and we had a fine dinner ahead of us at the hotel - we were definitely getting there :o)

You will be able to follow our trip in "sea kayaking stereovision" (and with much better photographs than mine!) by reading Douglas' blog, starting here
Posted by Ian Johnston at 20:02