From Corriecravie we continued our journey northwards up Arran's west coast. The wind had thankfully dropped a notch and was now F4 from the northeast. Although we'd get some shelter from the bulk of Arran, the funnelling effect of the Kilbrannan sound would mean that we'd be paddling into whatever wind there was for the remainder of the day. At some point, paddling into the general northeasterly airflow would be inevitable if we wanted to paddle right around the island, we hoped that our plan to go clockwise would minimise our exposure to the worst of some forecast stronger wind. 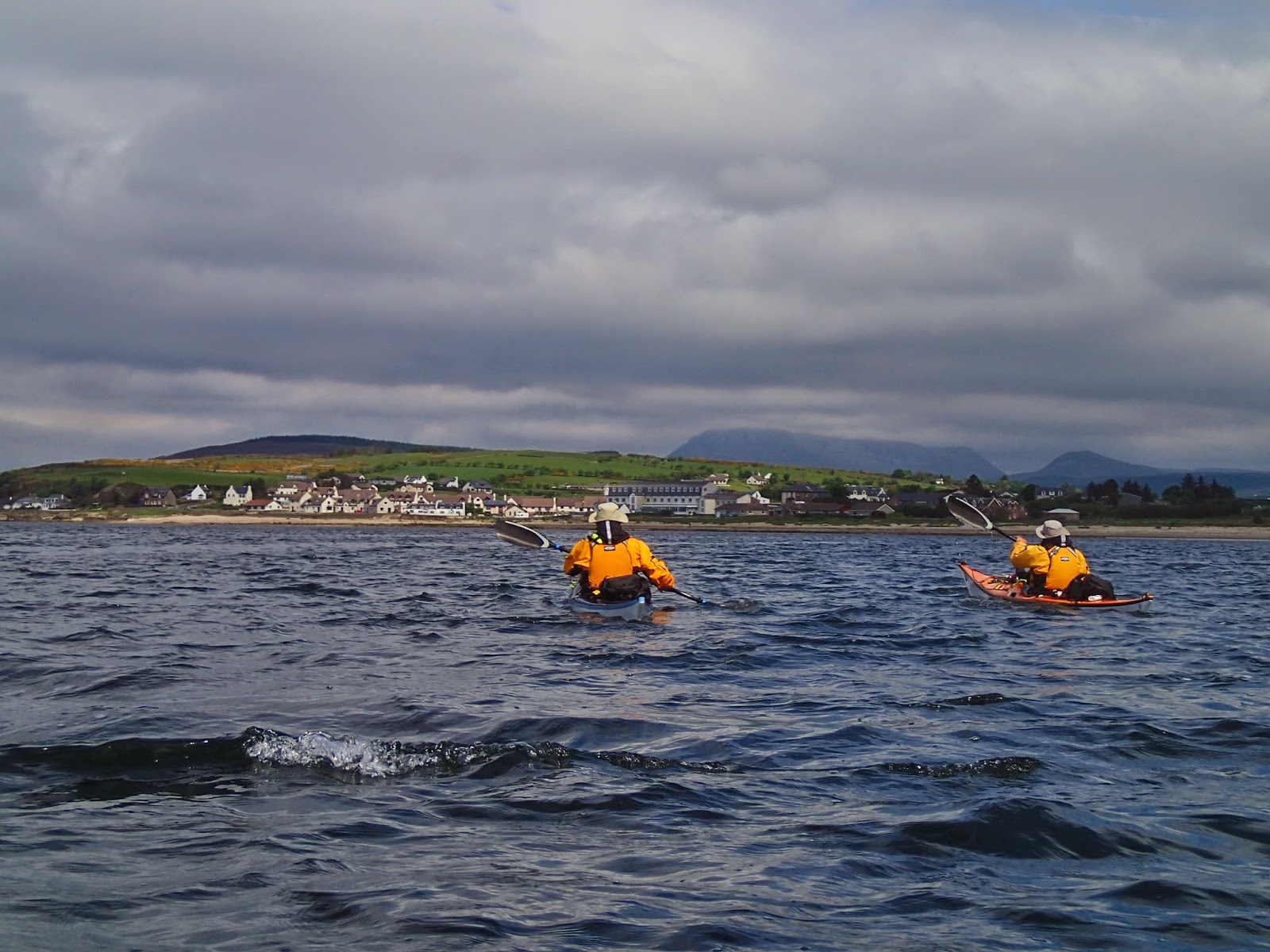 For the time being the breeze dropped nicely as we paddled across Drumadoon Bay towards Blackwaterfoot, where we planned to take first luncheon on the beach to the west of the village.  Nearing the shore, we got a cheery wave from a young family we'd met the previous evening at Kildonan, travelling in an immaculately restored 1974 VW camper van.  They were on their own adventurous journey during which they planned to cross to Kintyre, then visit Islay and Jura - what a great trip! 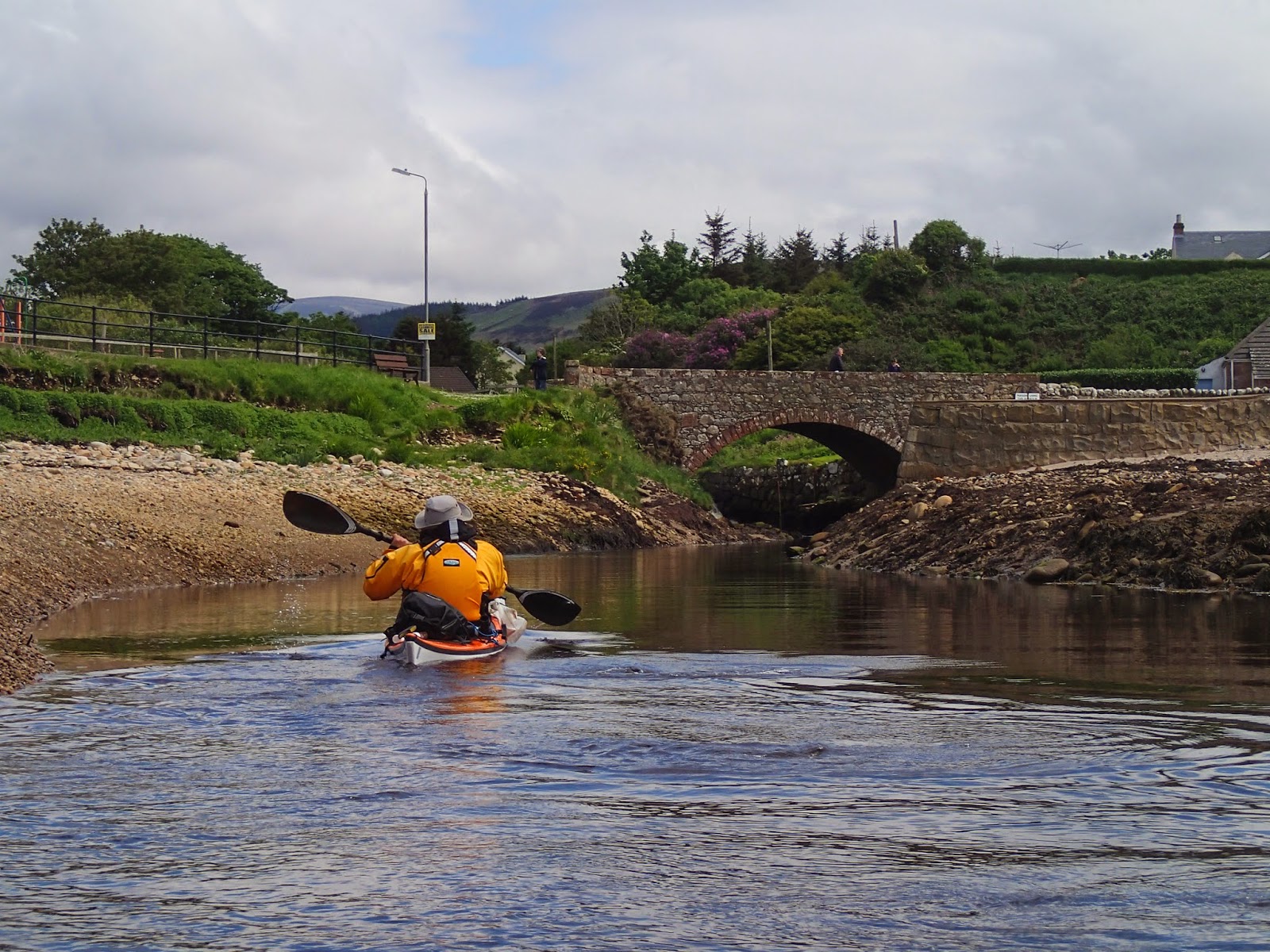 Before we headed to the beach we investigated the outflow of the Clauchan Water where, improbably, there's a tiny harbour tucked in just to seaward of the bridge.  It must have been a really sheltered haven for the fishermen who ran small boats from here. 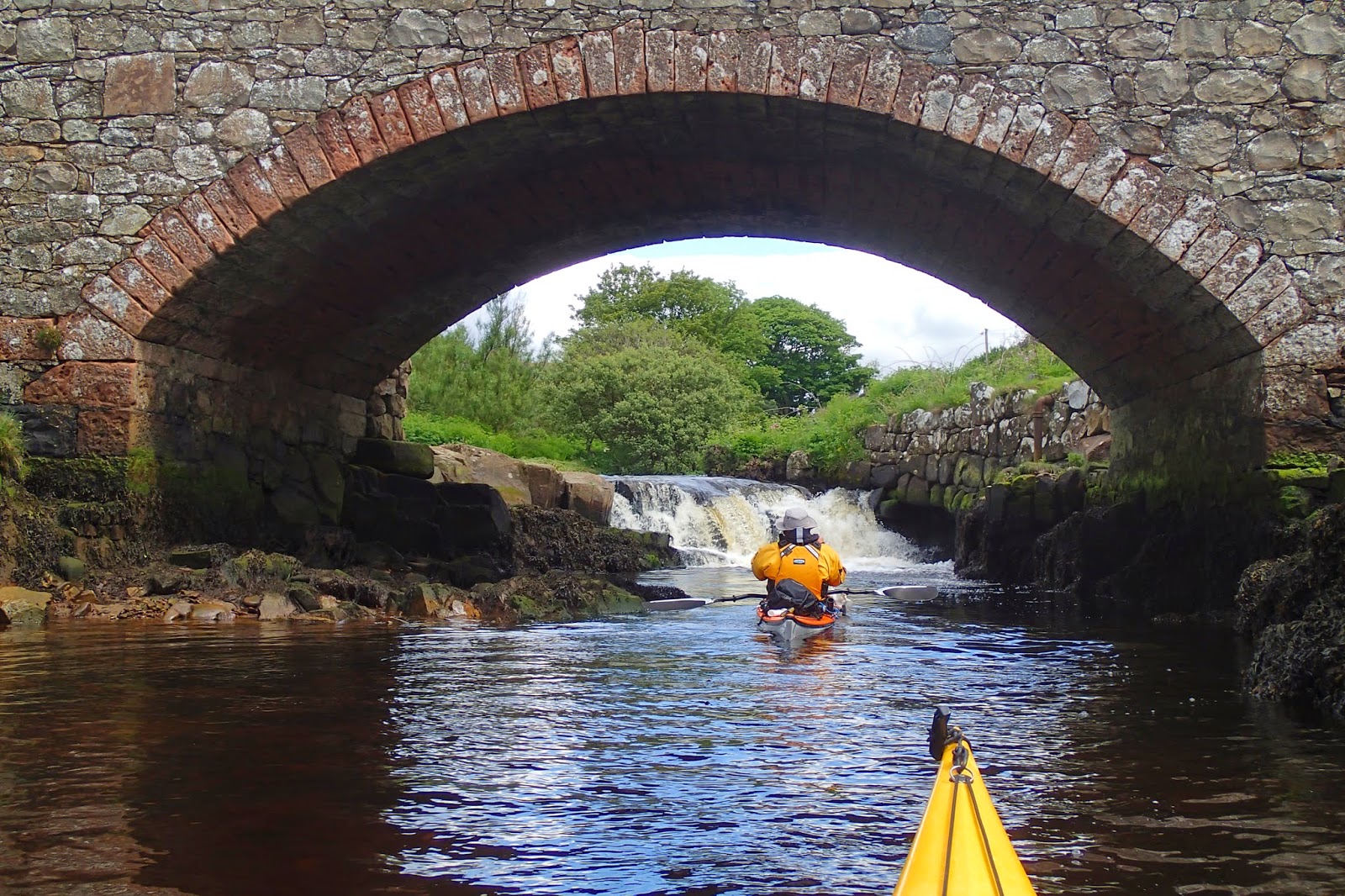 At the bridge itself, one reaches the definitive limit of navigable water!  Exploring these small diversions always adds interest to a journey....... 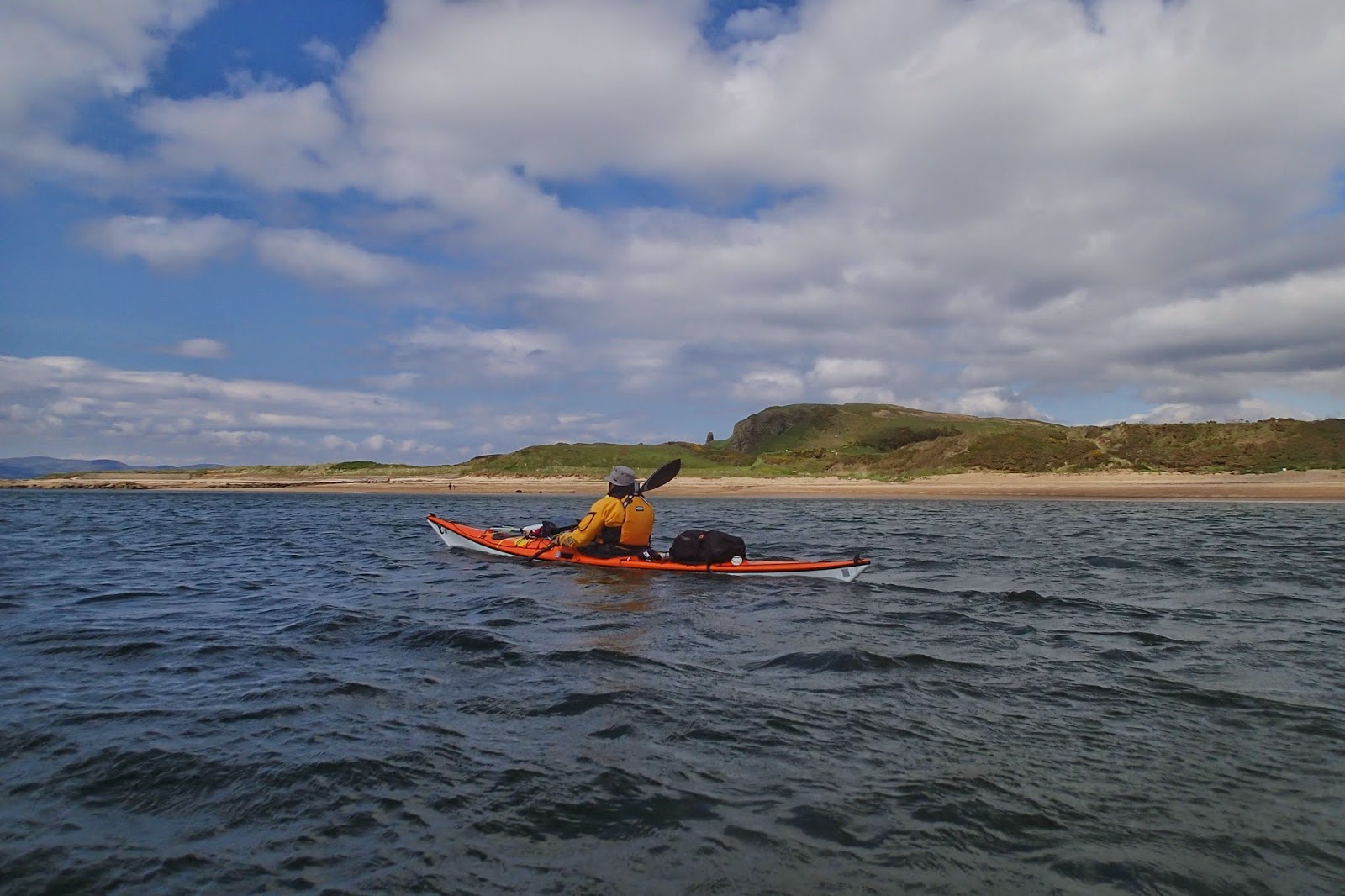 We took our luncheon on this fine sandy beach.  It's an ideal spot and one of Arran's few sandy beaches; most of the coast being rocky or pebble beach.  Perhaps that's why it's so popular with dog walkers, some of whom have a proprietorial approach to the whole beach and don't seem to mind if their dogs "examine" boats and lunch containers....... 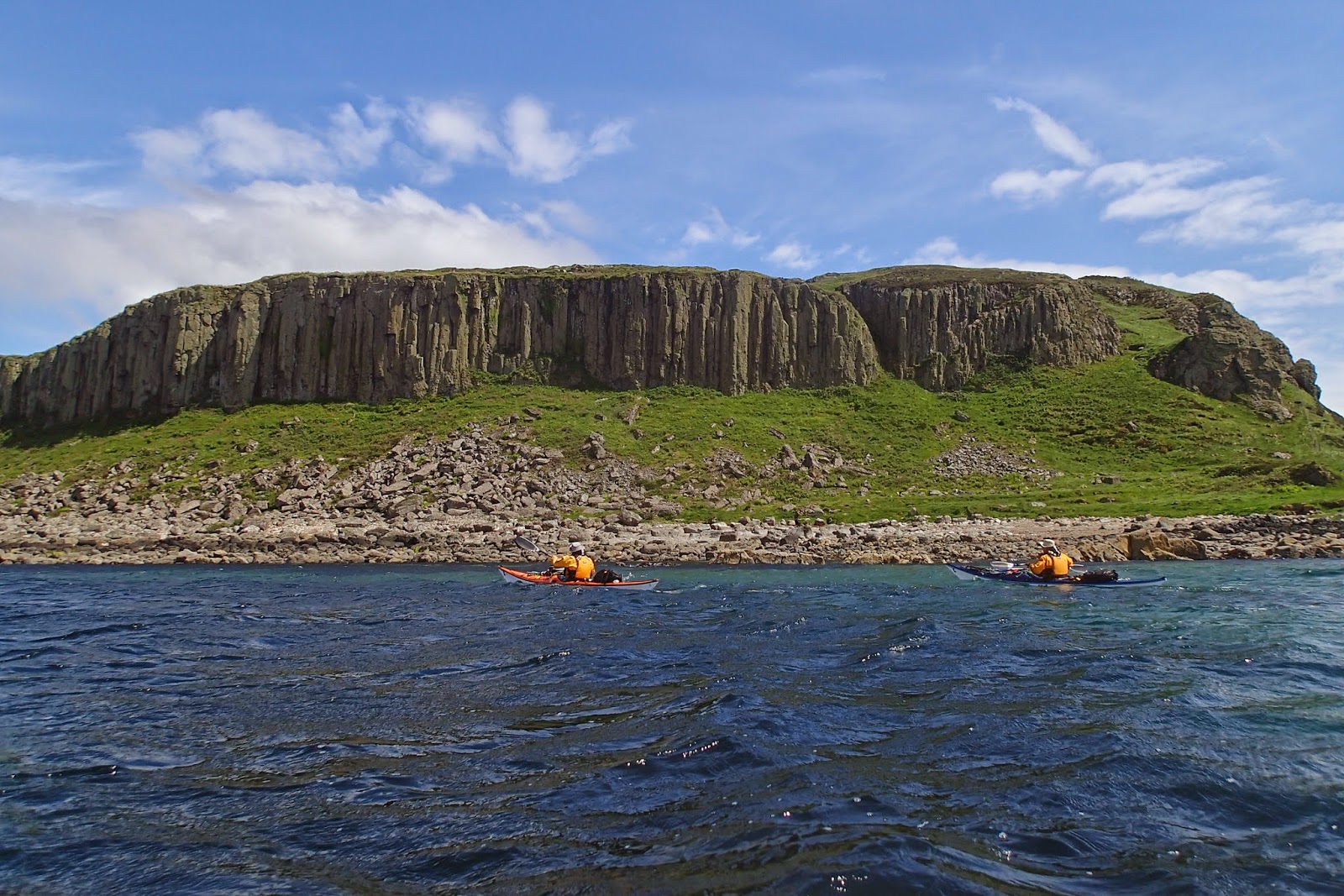 The western end of the beach marks the south west corner of Arran and the remarkable geological and historical feature of Drumadoon.  This impressive outcrop was formed when volcanic lavas were injected horizontally between the bedding planes of the older Devonian and Carboniferous sedimentary rock.  The sedimentary rock has been eroded away leaving the harder lava as a "sill".  Bennan Head was formed in the same manner as Drumadoon and is a very similar rock type.

Drumadoon is an anglicisation of "Druim na Duin" (ridge of the fortress) and there are remains of a very large Iron Age hill fort on the flat summit of the Doon, some 400 metres by 170 metres and enclosing an area of 12 acres.  The presence of many hut circles and other remains to the north and east of the Doon suggests that it was probably in use as a tribal centre - a haven much older than the harbour at Blackwaterfoot.

There is a golf course at the base of the outcrop which has a reputation as one of Scotland's more scenic courses, while a combination of rare lichens and a colony of nesting Fulmars inhabit the steep western face. 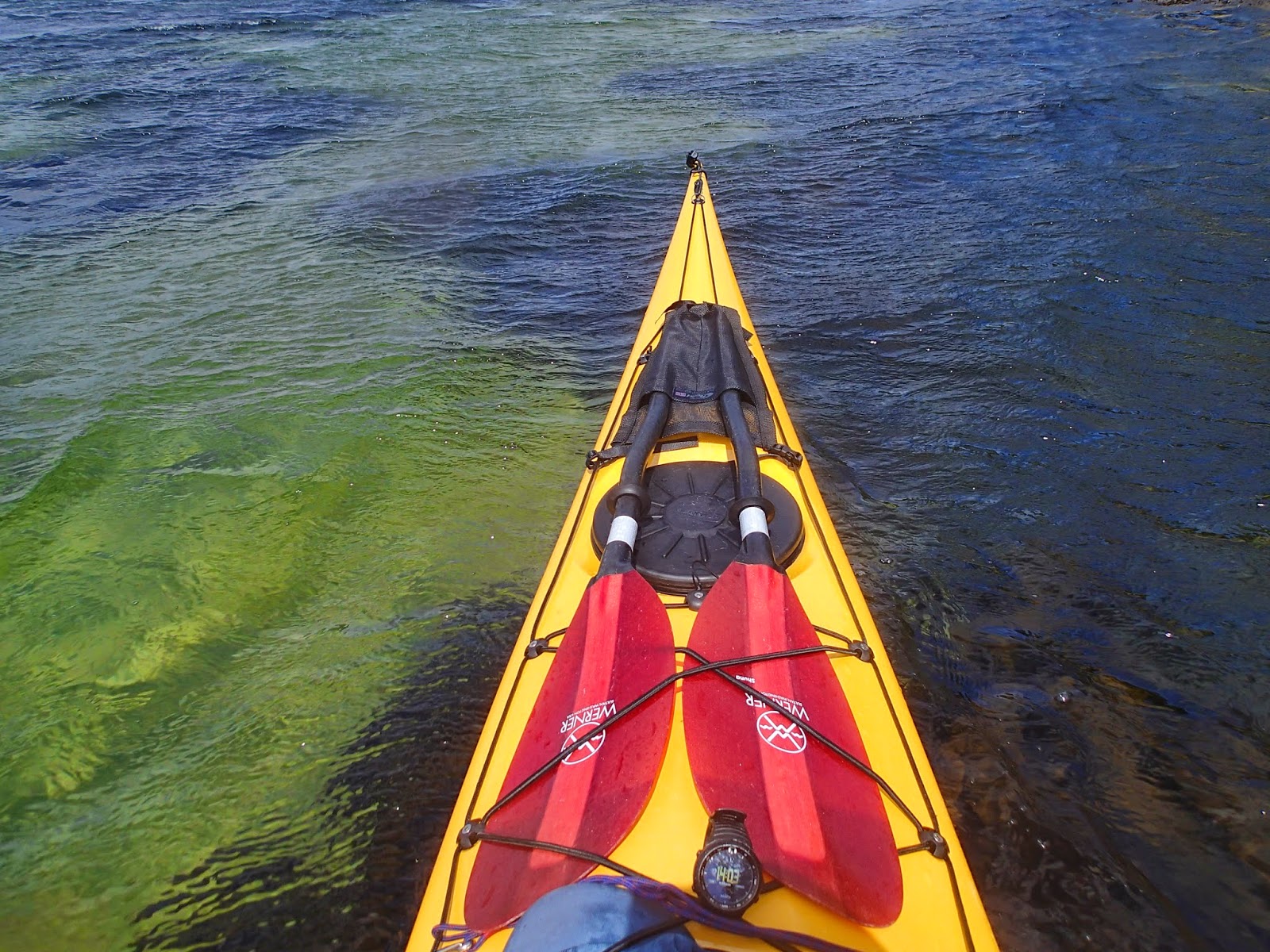 The wind increased markedly in the vicinity of Drumadoon Point, as is often the case with headlands, even quite small ones.  We had a stiff paddle for a couple of kilometres, but gradually the "corner" effect of the wind subsided.  The scenery ashore was very engaging, as was the view below our boats; a combination of great clarity in the water, bright sunlight and strong contrast on the sea bed made for a colourful sight. 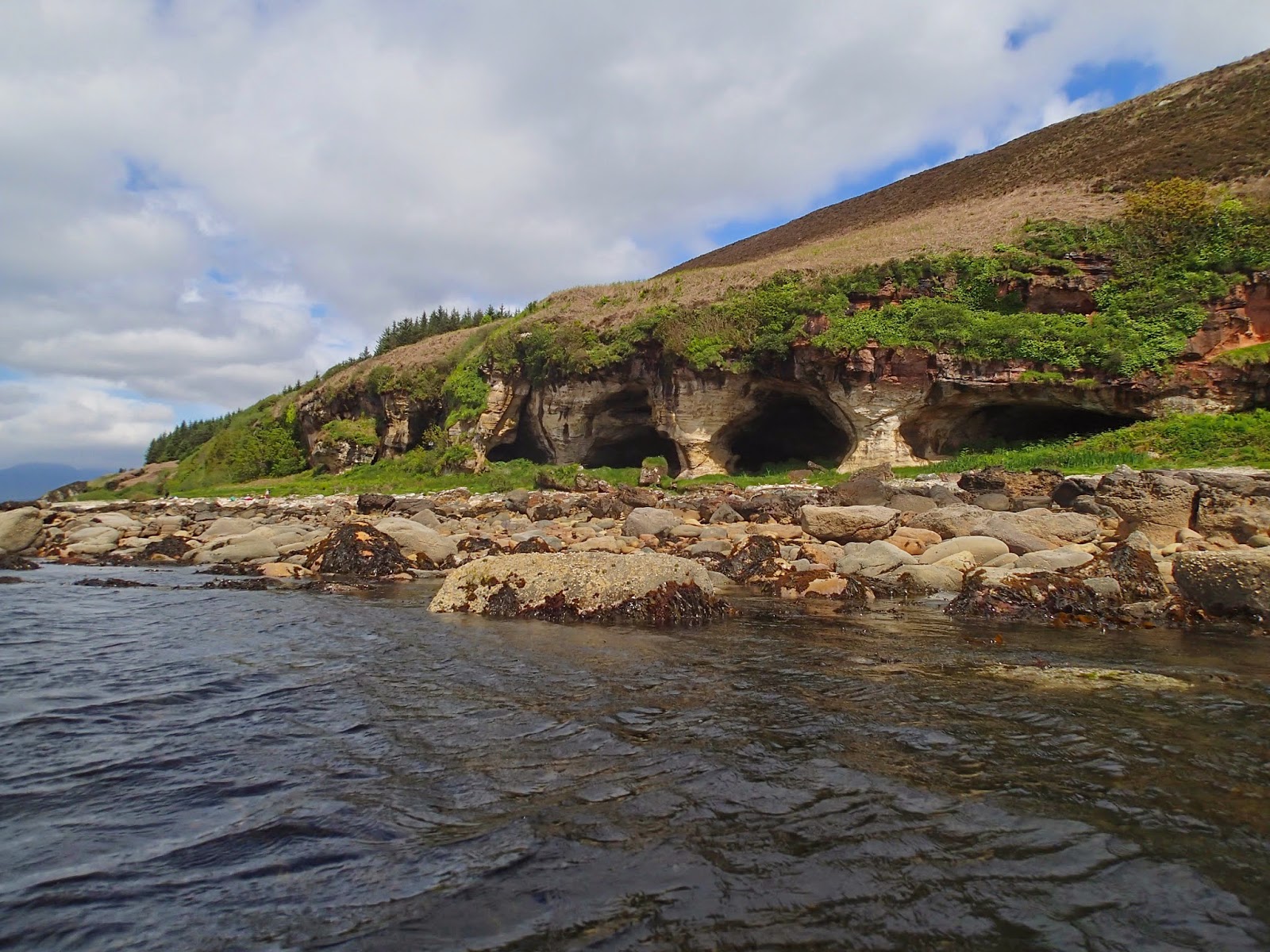 A couple of kilometres north of Drumadoon is King's Cave - one of a series of caves in the soft sandstone rock (another of Arran's quick-fire geological changes here!).  The caves are 8 metres above the present day high water mark on the level of the raised beach which runs right around Arran, a result of the land rising once released of the weight of ice during the last Ice Age.

The cave contains carvings of animals and other symbols, dating from the Iron Age through early Christian times to (unfortunately) modern graffiti.  To protect against further damage, King's Cave itself is closed by a bars set into the rock, though the others are accessible.

There's a tradition, backed up by early carvings, that the caves were used by Christian hermits.  In more modern times the King's Cave was used to hold an 18th century meeting of the Kirk session, and in the 19th century it was used a school.  King's Cave has been a haven down the centuries, but the least likely person to have sought shelter here is the King after which the cave is named - Robert Bruce.  The story goes that this was the cave in which the efforts of a spider building a web convinced the Bruce to make another effort for the Scottish crown whilst a fugitive.  There are several caves which claim this distinction, but in fact the most likely candidate isn't in Scotland, it's on Rathlin Island off the Antrim coast.

On our journey up Arran's west coast we'd already encountered three havens from the past - we were about to encounter an unexpected haven of much more immediate benefit!