An Arran Amble - driven around the bend....

After lunch at the Kildonan Hotel we got our tents pitched on the "Seal Shore" commercial camp site adjacent to the hotel. The rates here are very reasonable, the showers excellent and the ability to walk straight from the beach onto the tent area is a bonus for sea kayakers. We left our boats on the shore above the high water mark and although the site was fairly busy, being aBank Holiday weekend, they were absolutely safe from interference.

We took an afternoon walk west along the coast to explore the sights of Kildonan  before returning to the hotel for a very pleasant dinner and some rehydration. During the late afternoon and early evening we watched the development of a entertaining looking tidal overfall which extends from Kildonan out in an arc to Pladda and caused by a shallow reef running between shore and island.

Although the campsite was busy with families and was fairly lively during the evening, all was quiet by 2230 and we all got a reasonable amount of sleep before being periodically woken by the passage of strong squalls and heavy rain which swept in from the northeast......this did not bode well for the morning's paddling!

We were up early and packed away before any other campers had emerged.  It was still windy though the rain had died away and we felt that there had been a bit of a drop in the wind speed.  Our planning had paid off in that we would have the wind at our backs during the first part of the day, and the flood tide would be just about in its last hour, dropping to slack water as we approached the first of two crux points in the Arran circumnavigation. 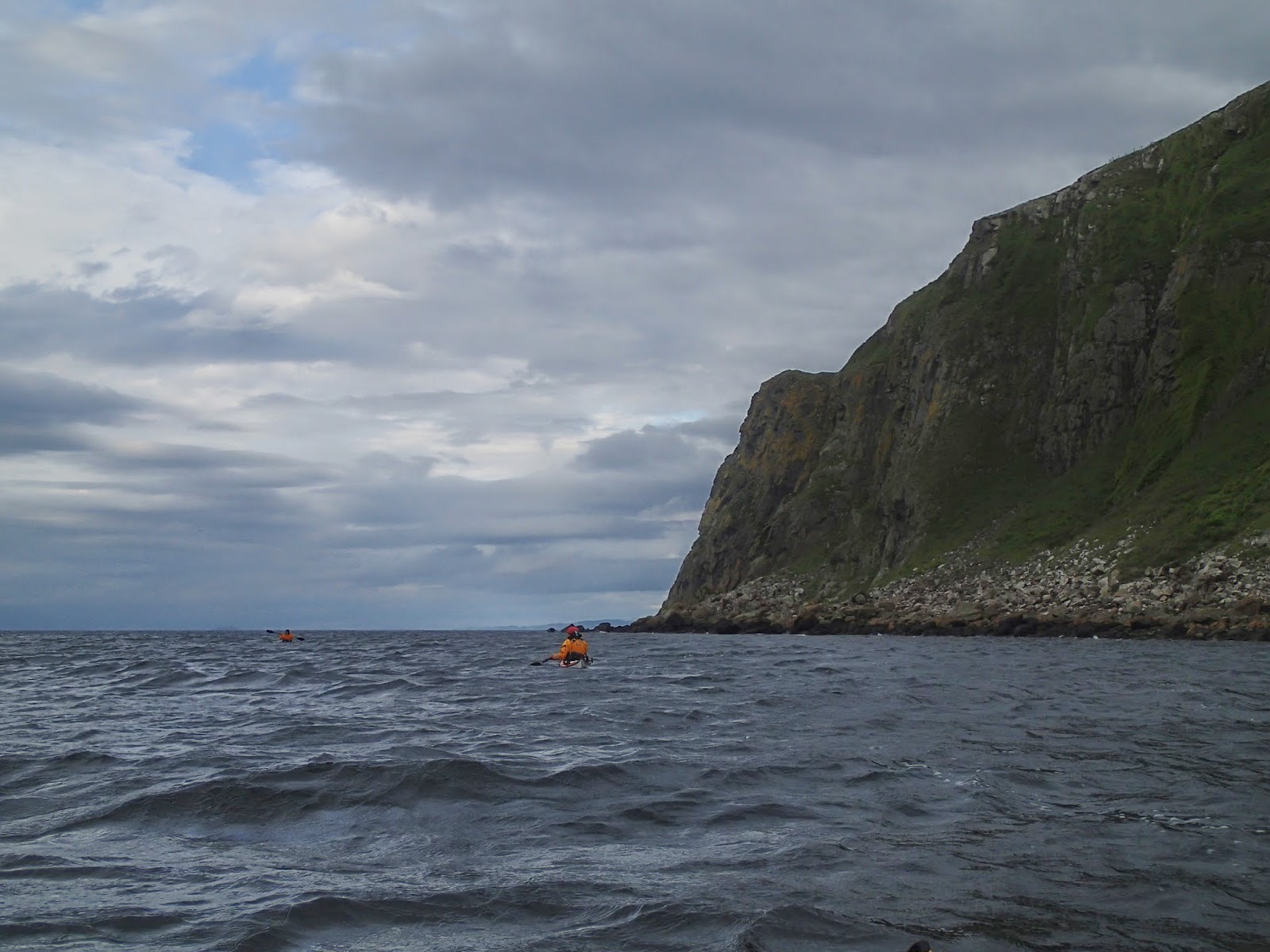 Out on the water we had no particular need to paddle - the wind at our backs was a solid F5 with sustained higher gusts.  the camera came out only in the lulls in the wind and, as ever, the images don't convey the wind speed!  We were making 4km/h using just ruddering strokes as we approached Bennan Head, the southernmost headland on Arran.  The location seemed perfectly suited to the weather; wild and imposing. 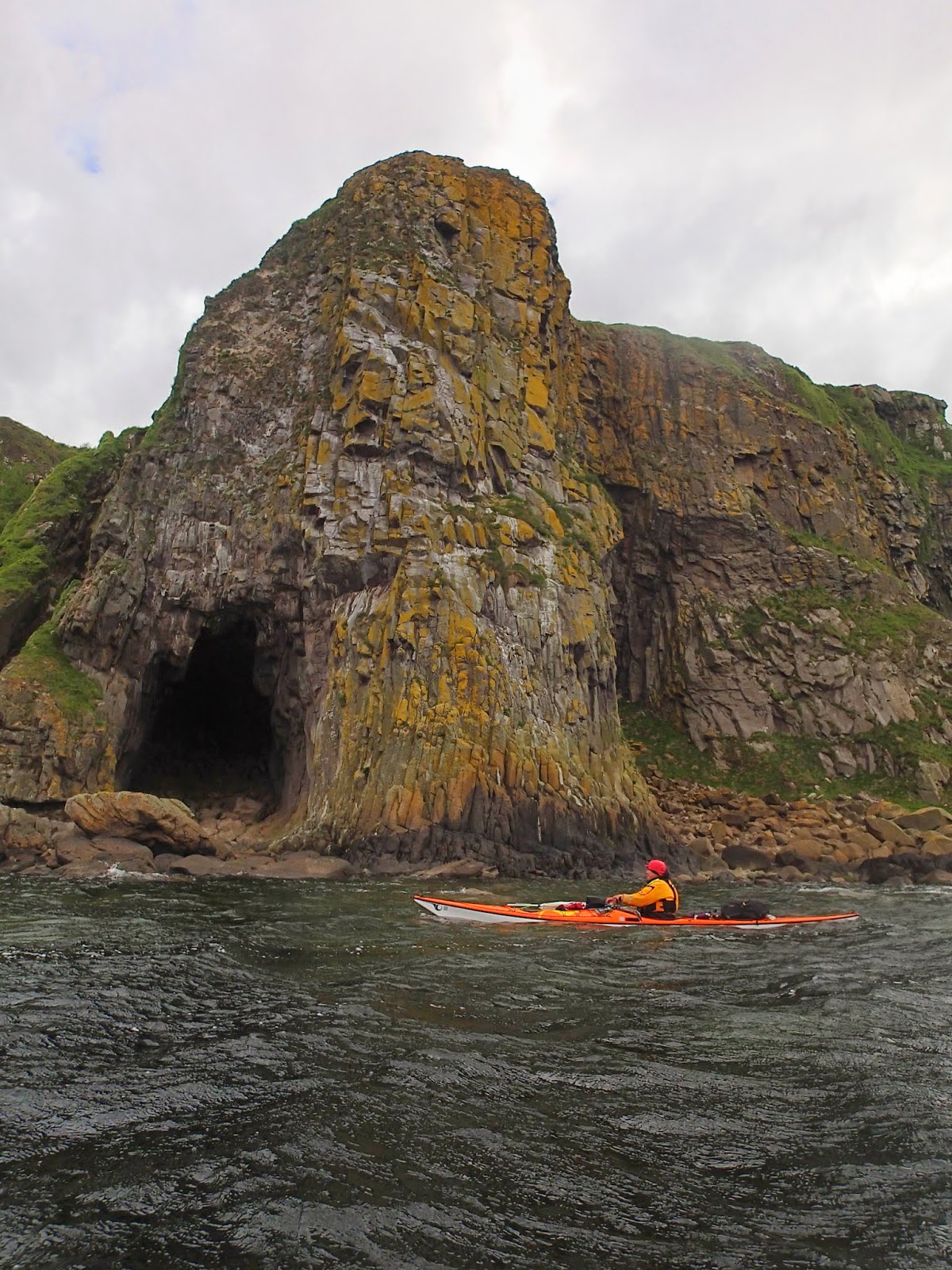 The headland itself is a dramatic crag rearing out of the sea with a large cave at its foot.  We were driven past here by the wind at a spanking pace, and as we passed the headland...... 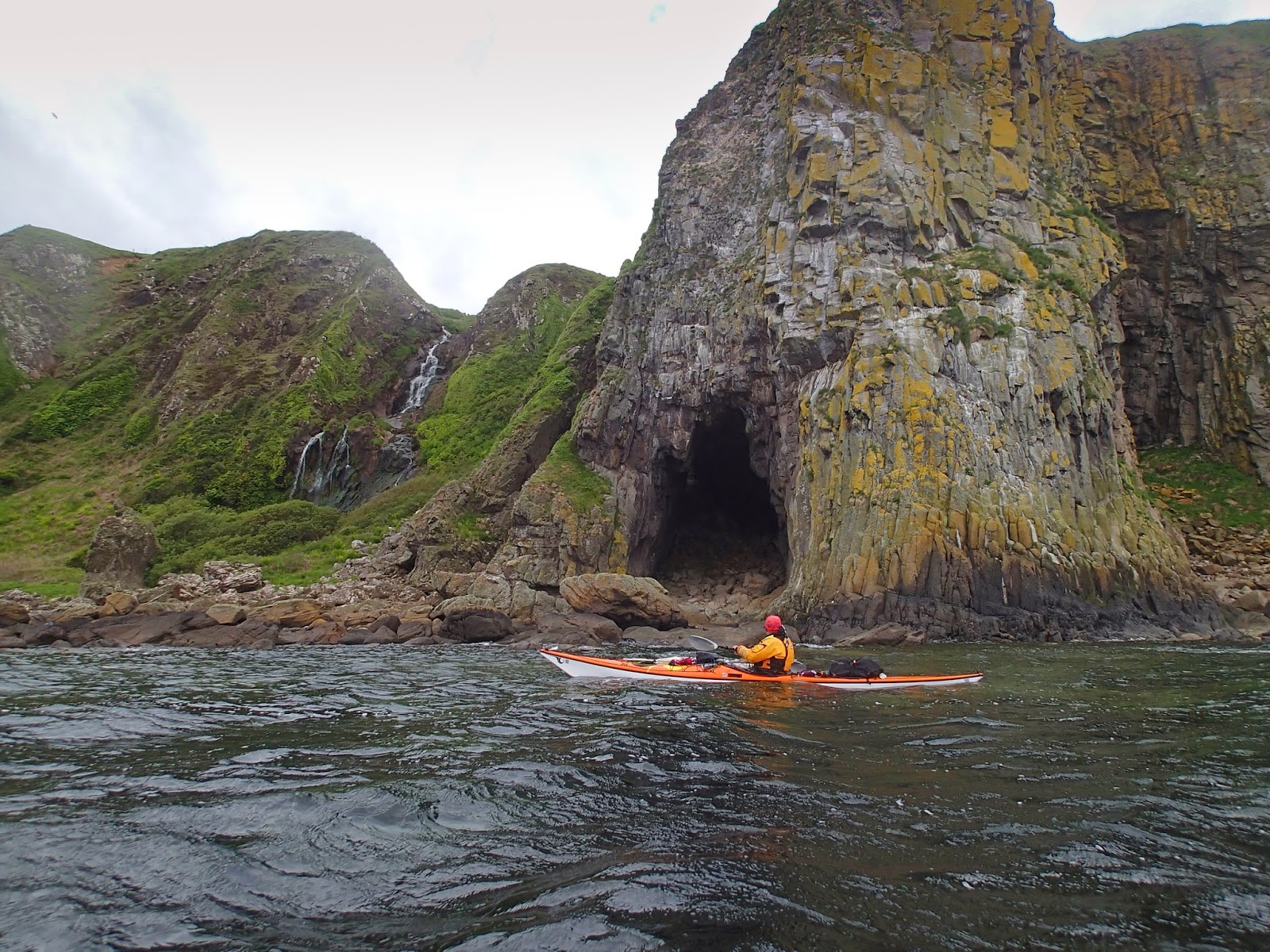 ...yet another impressive view opened up with a burn cascading down a cleft in the clffs, taking two bounds over rock sills on its way to the sea.  After passing Bennan Head we came into some shelter, but with the wind still on our quarter.  It's difficult to stay close inshore on this coast as basalt dykes reach out into the sea like long bony fingers for several kilometers.  We had an intruiging sighting here - we saw an Eagle but at a fair distance and we remain unsure whther it was a Golden or White Tailed Eagle. 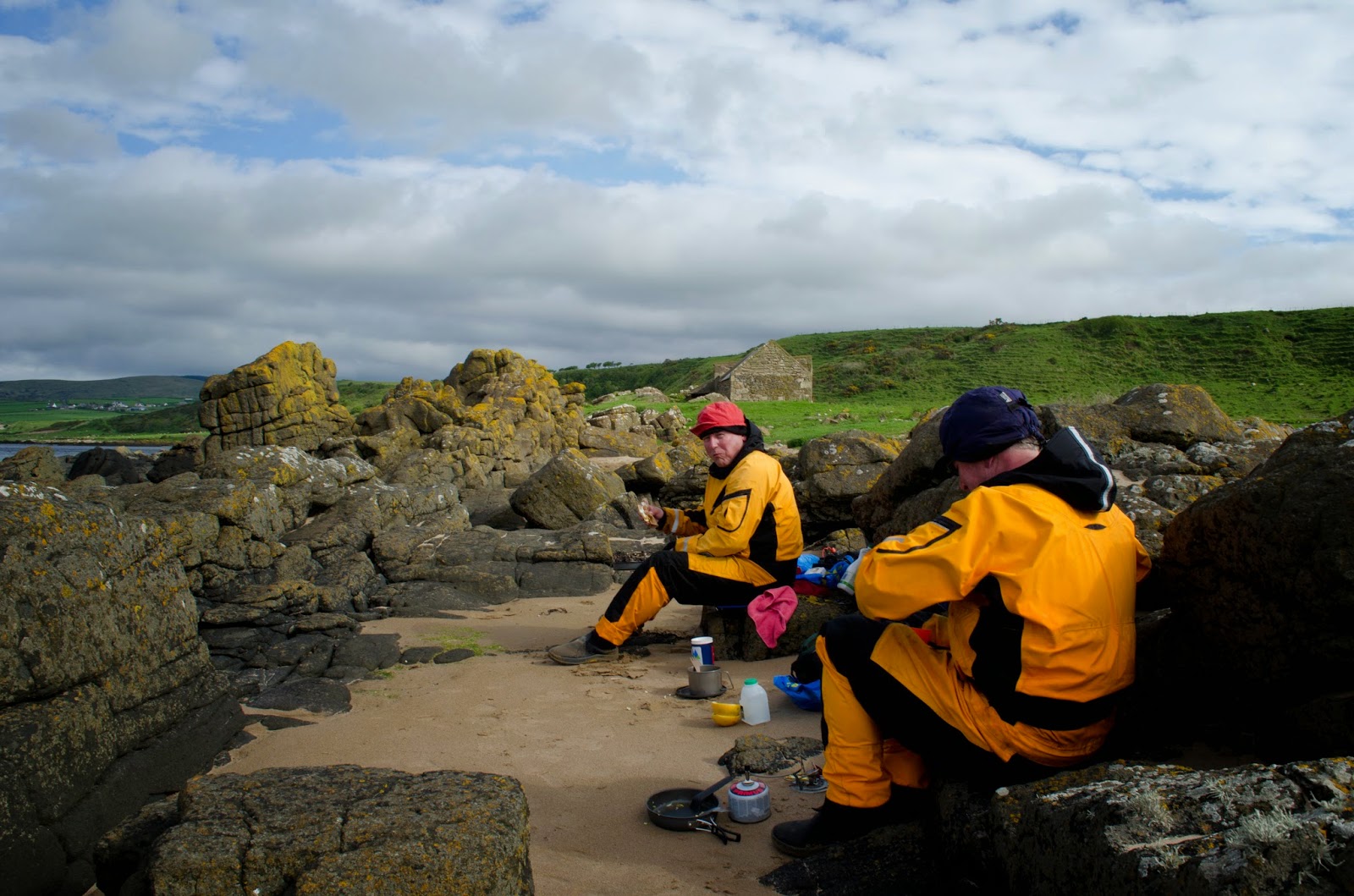 We paddled on as the greyness of the early morning gave way to brighter conditions, and headed for Cleats Shore in order to take first breakfast.  We had hoped to explore the ruined chapel above the shore, but elected not to because of nesting Ringed Plovers on the shingle just above the tideline - their eggs and chicks are very vulnerable to predation and also very difficult to see when walking across the shingle.

The threat of predation was brought shockingly home to us as we arrived on the beach.  A pair of Shelducks were escorting their brood of tiny ducklings, still at the "clockwork" stage, through the gaps in the rocks as we neared the beach and we held off to allow them space.  As we were enjoying the spectacle, there was a sudden crash and a Great Black Backed Gull smashed into the middle of the party, snatching a duckling and swallowing it whole as it took back to the air, pursued by an irate Shelduck drake.  It was a distressing sight - more so because the Shelduck's attention may have momentarily been on us rather than the aerial threat - and a reminder of how raw nature can be.

A much more pleasant sight was the Otter female and cub who popped up as we ate breakfast, not ten metres from us.  The expression on the mother's face was priceless and both Otters moved away a bit before surfacing again to check us out.

It had been an eventful morning and it was only just after 0800!  We'd really had a great and exhilarating passage around Bennan Head and were grateful we hadn't had to paddle against the wind, or to deal with wind against tide conditions.  The west coast of Arran now stretched away to the northeast in front of us. 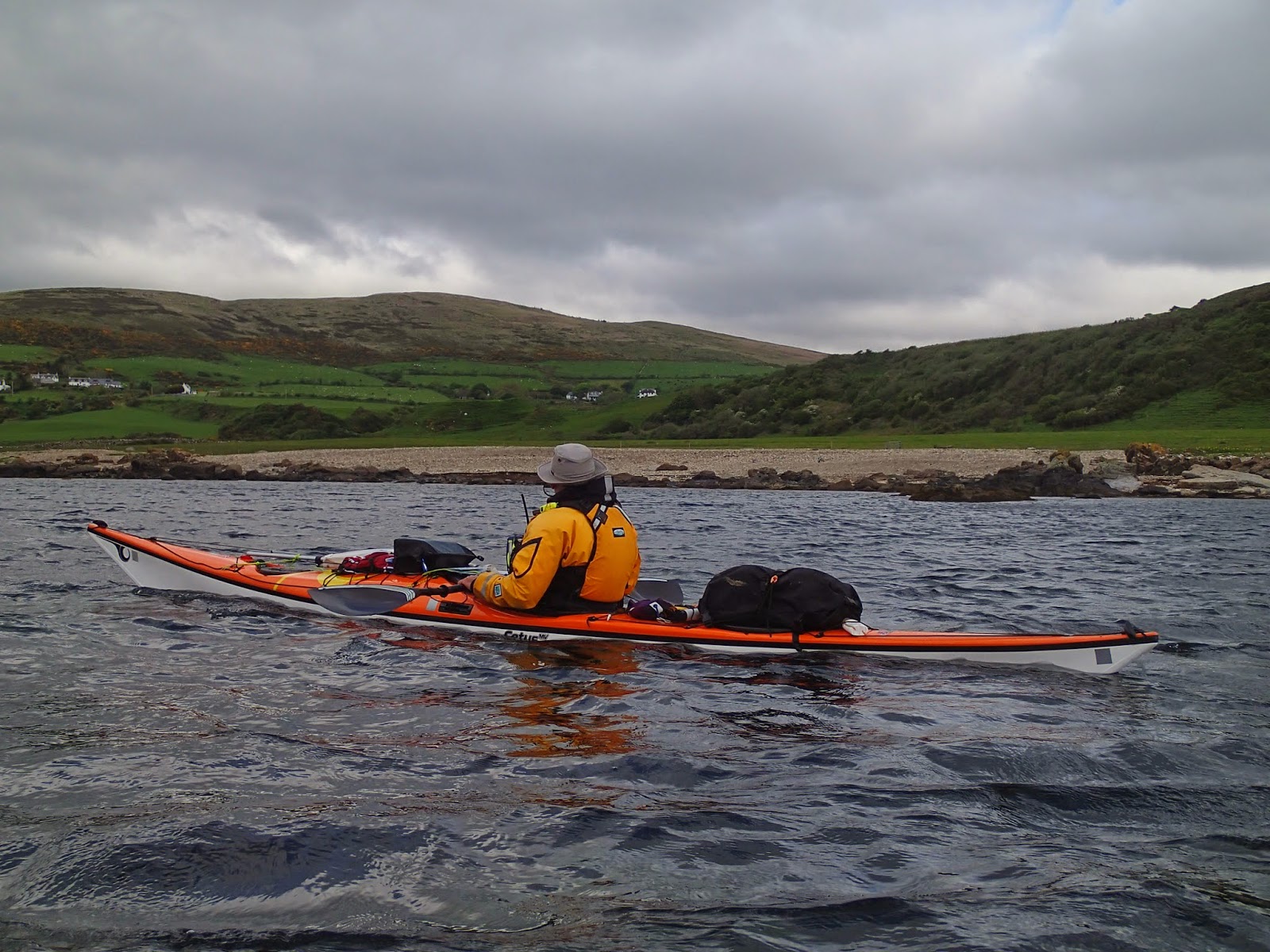 Moving on from Cleats Shore we paddled steadily along past the wonderfully named Slidderywater Foot to Corriecravie, where Douglas had a particular interest in the green croft fields.
Posted by Ian Johnston at 23:15