A ribbon of history - Dunagoil hillfort

From Dunstrone hillfort, the next historical site I intended to visit was the larger hillfort at Dunagoil. If doing this walk again I'd return to the road from Dunstrone and walk down to Dunagoil before leaving it to head directly to the hillfort. On this occasion I chose to head along the ridge above the shoreline which proved tough going through extensive patches of gorse broken by gullies choked with brambles. Although slow, this way did have some attractions..... 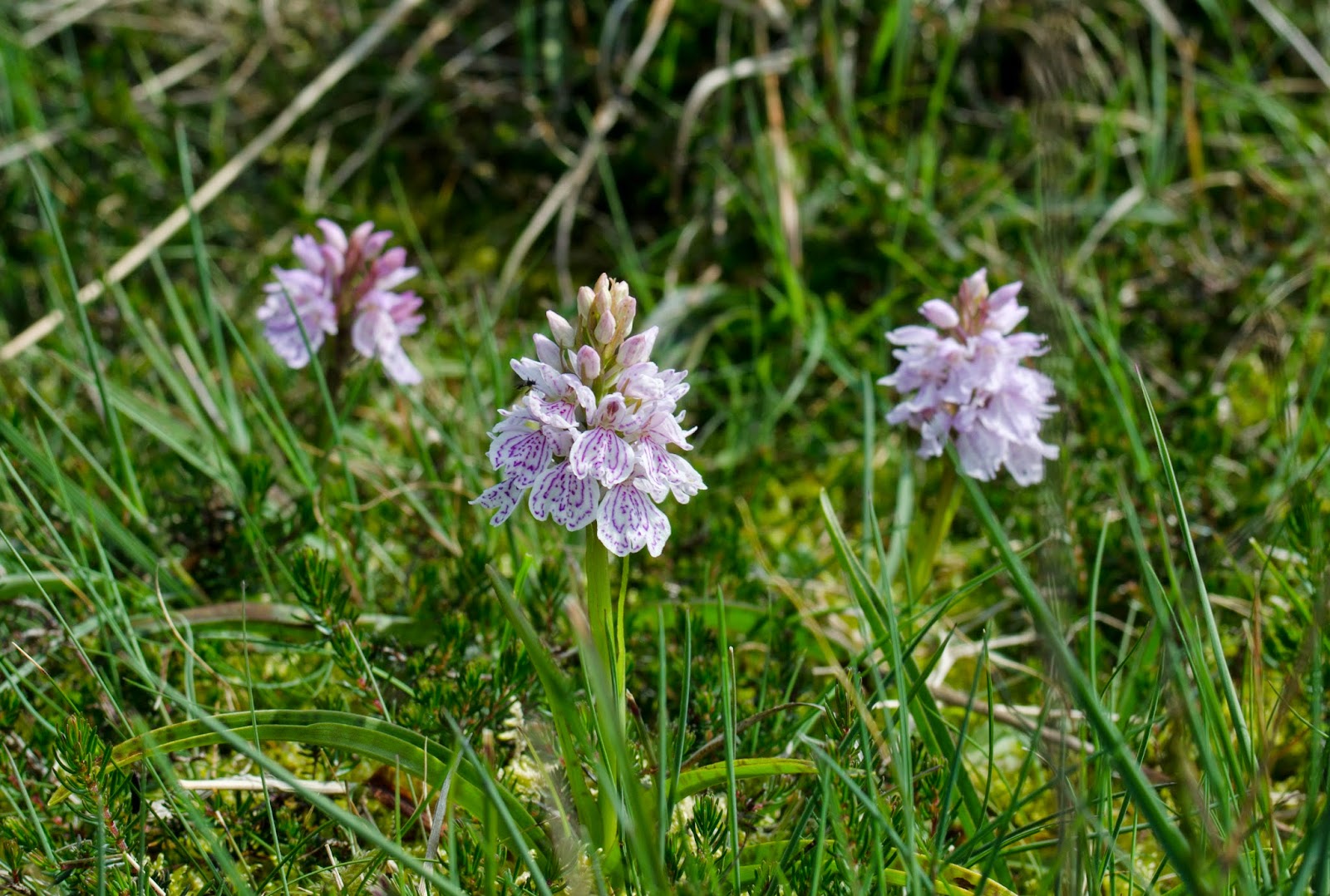 Small groups of Heath Spotted Orchids (Dachtylorhiza maculata) were in full flower in the damper ground.  There are seven species of Orchids found in Scotland, and identification can sometimes be tricky as they tend to hybridise quite freely.  Spotted Orchids are the most common of the group, preferring damp ground and acid soils such as peat.  The flowers are variable in colour from almost white to deep pinks. 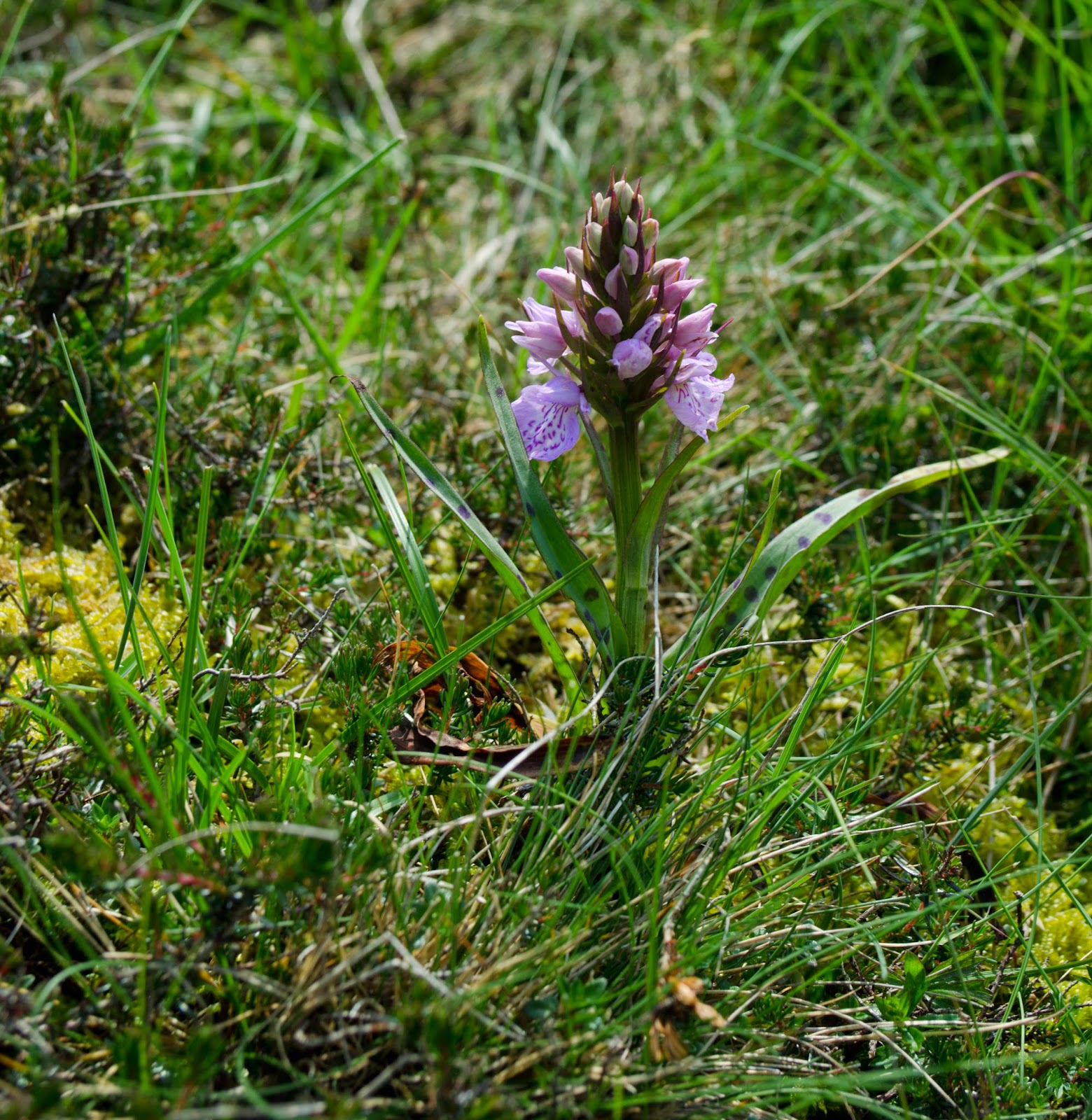 The term "spotted" refers not to the exquisitely patterned flowers but to the strap-shaped leaves which have purple blotches.  The flowering of Spotted Orchids is a marker that Spring is turning to early summer just as the flowering of Flag Iris always seems to coincide with the emergence of biting midges.... 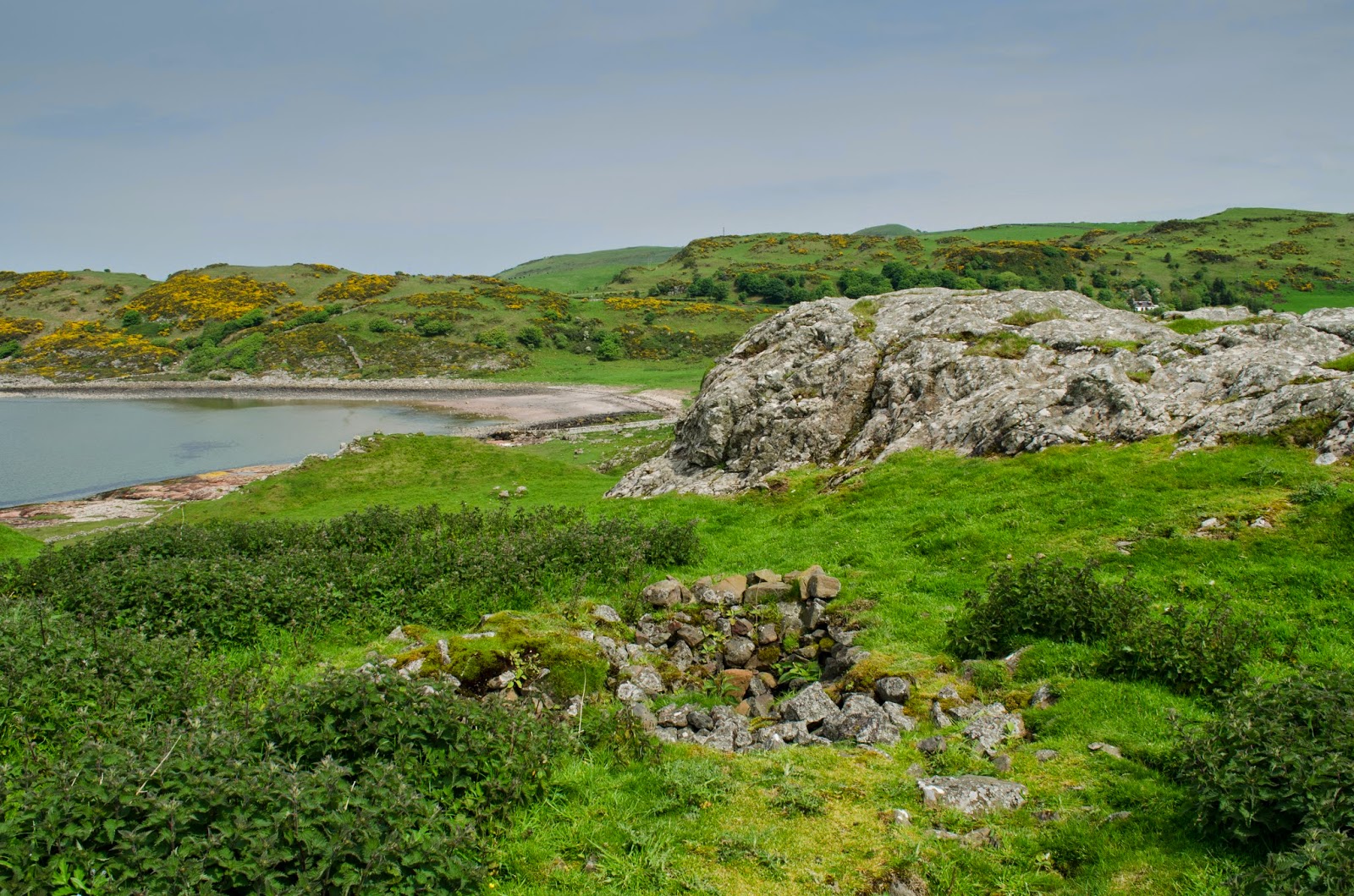 After crossing the sandy beach at Dunagoil Bay it's a short climb onto the summit of the tilted basalt lava ridge of Dunagoil itself. 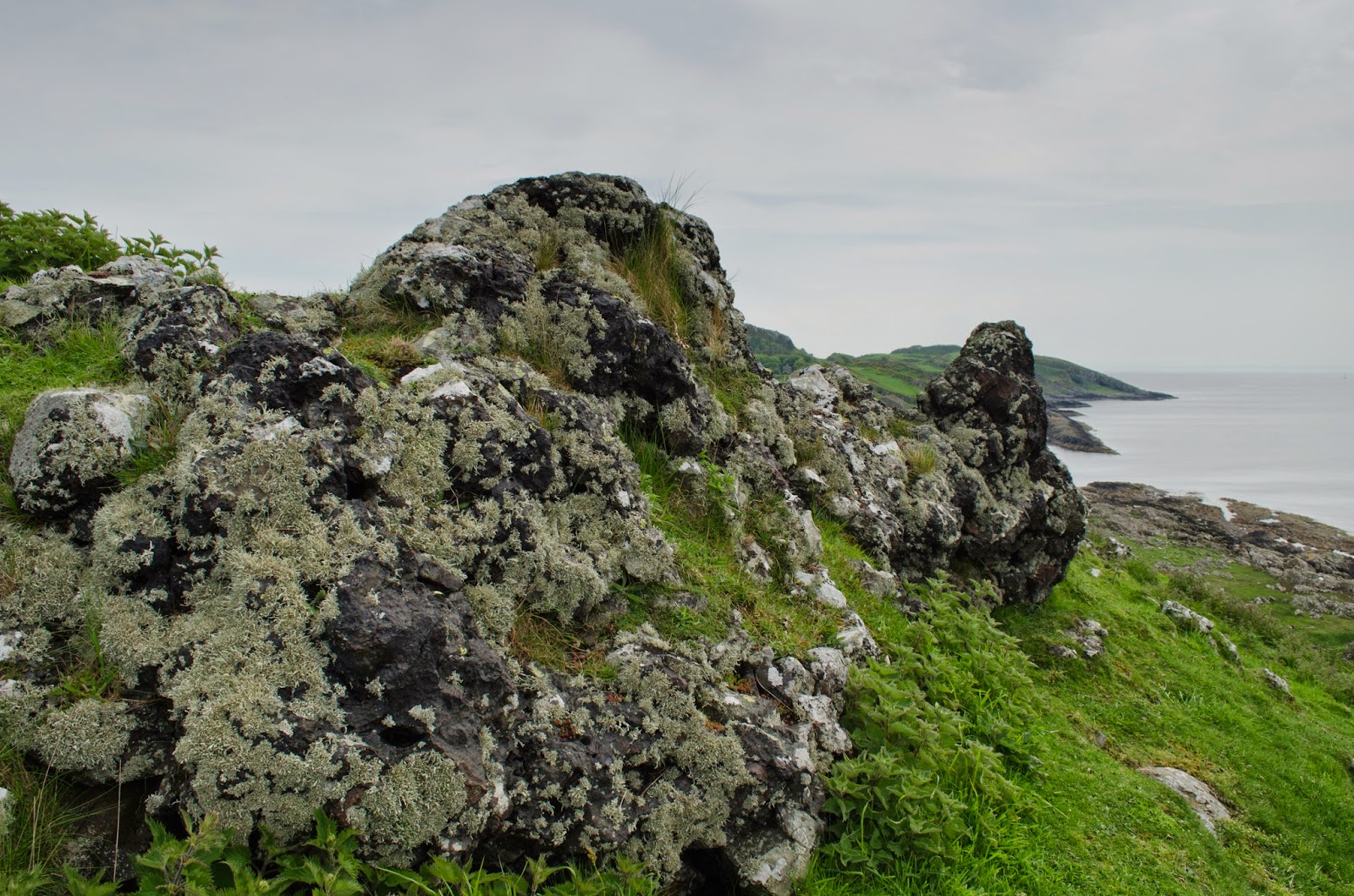 At first glance there is little of the hillfort to see, but a closer look shows that what appear to be lines of bedrock are in fact part of the structure, rocks fused together by vitrification.  The name Dunagoil means "fort of the foreigner (or lowlander)", suggesting that the builders were incomers to Bute.  The site is accessible only from inland and measures about 85 metres by 20 metres; a detailed description can be found on the RCAHMS website here.  Numerous artefacts such as finger rings, axeheads and moulds for manufacturing axes have been found here.  The site may have been occupied for a long period before the fort builders arrived as there are some possible prehistoric remains along the ridge, and use continued long after the fort had been abandoned.  The main period of use is believed to have been approximately 200BC to 100AD

Perhaps the most intriguing feature of Dunagoil and other similar hillforts is the vitrification of the walls. 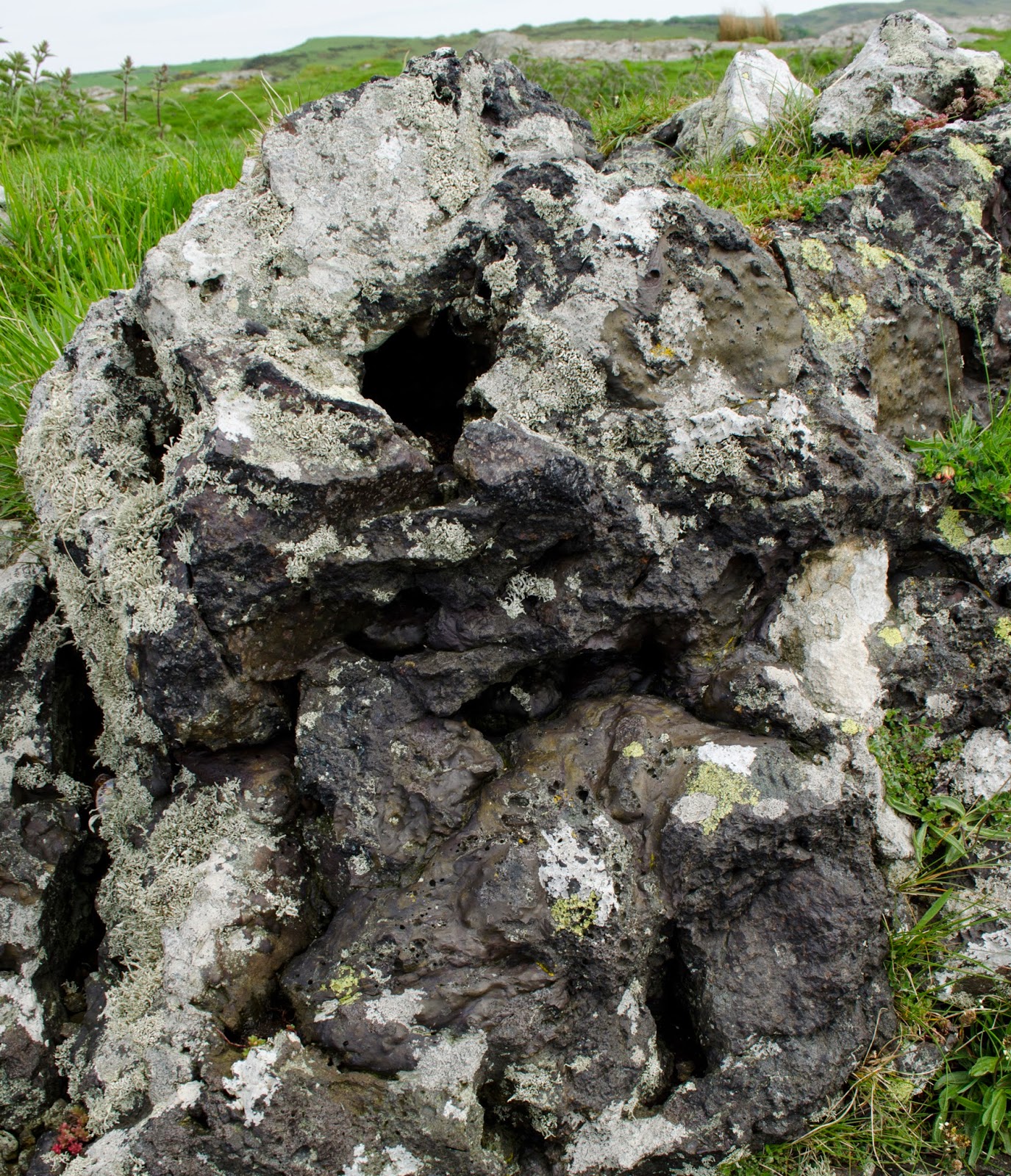 Experts still debate what led to the vitrification of so many hillforts.  There is consensus that in most cases the outer walls of such forts were timber-laced (i.e. timber formed the centre of the walls with rocks on both inner and outer faces).  There is also agreement that to create the intense and long lasting heat required to partially melt the rock itself would have required much more than a firing of the fort in a raid.  It would probably have required more timber to have been placed against the outside faces of the rock and firing in a very specific manner over an extended period.

The result can be seen in this image; the rock has partially melted then fused together (vitrified) into a substance half way between rock and very tough ceramic or glass.

So was this done to destroy the fort, or to strengthen it?  There is evidence that some of the vitrified material was re-used during the later period of occupation, which may suggest that vitrification was used to destroy the walls.  But.... the effort required to destroy one fort in this way must have been considerable - that it has happened at many similar forts raises the possibility that if destruction was the motive, it must have been a ritualised and concerted act of removal.  It also raises the possibility that vitrification was used in the construction process, a deliberate act of strengthening the fort walls and creating something permanent and (for the time period) at the cutting edge of technology.

Historians can't definitely say what vitrification represented - and I'm certainly no expert!  But, by trying to empathise with the human motives of our Iron Age ancestors it's possible to imagine both scenarios - that many forts were destroyed in the same manner, or perhaps built this way in the first place..........

From the Iron Age, my next intended site on this "ribbon of history" would be slightly more recent, and perhaps the best of all.