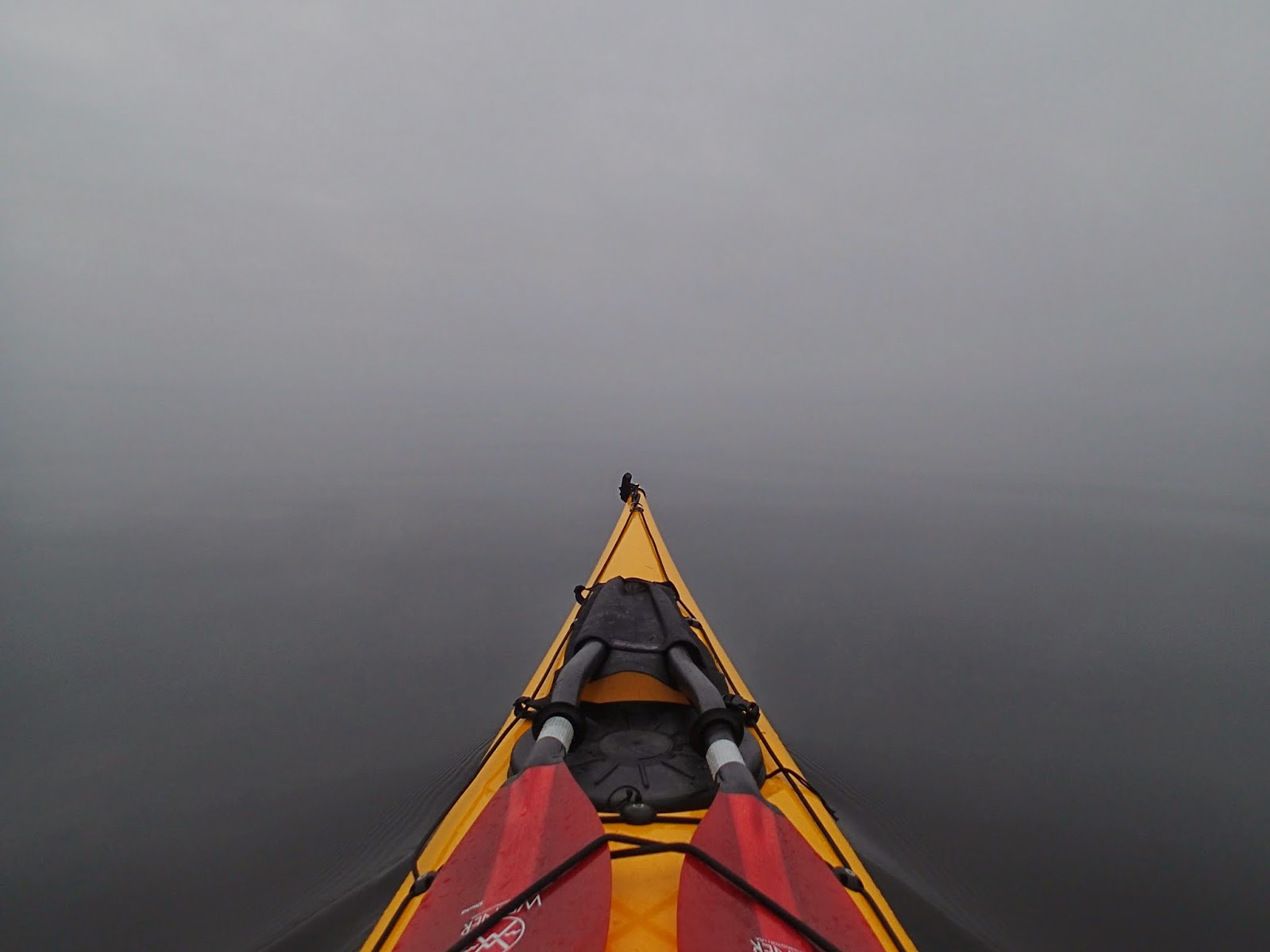 We estimated that our crossing from Kintyre to Arran would take approximately an hour.   Initially we paddled in thick fog with no visual reference point ahead; always a slightly disorientating process.  Absolute faith in the compass is required - twice I found myself veering to the left and had to correct course on advice from Douglas and Mike who were backing up the compass with GPS.  this was an interesting exercise for me; I'd chosen not to use the GPS and had restricted compass bearing checks to once each five minutes.  Had I stuck to this regime I have little doubt that I'd have made landfall back on Kintyre!

We were accompanied on our way by the haunting calls of Black Throated Divers and encountered several seabirds who appeared a bit surprised when we popped out of the mist in close proximity.... 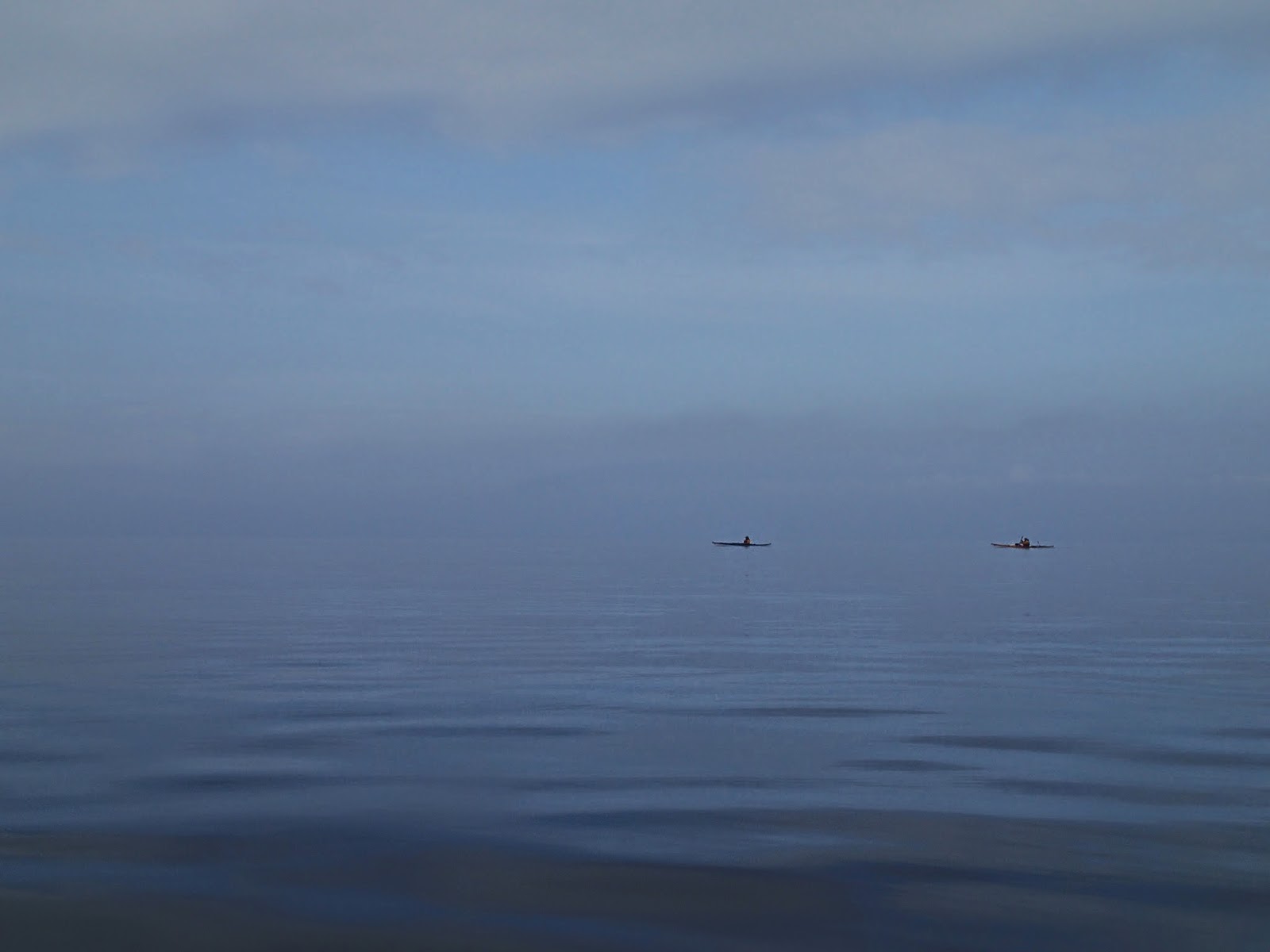 Little by little we detected some thinning of the mist and a faint hint of the outline of the hills of Arran ahead.  To the south, the width of Kilbrannan Sound was washed with the palest blue imaginable as a clearance in the mist began to open.

There was now little sound, though we could clearly hear Cuckoos calling from both the Kintyre and Arran shore; their calls echoing slightly across the still water. 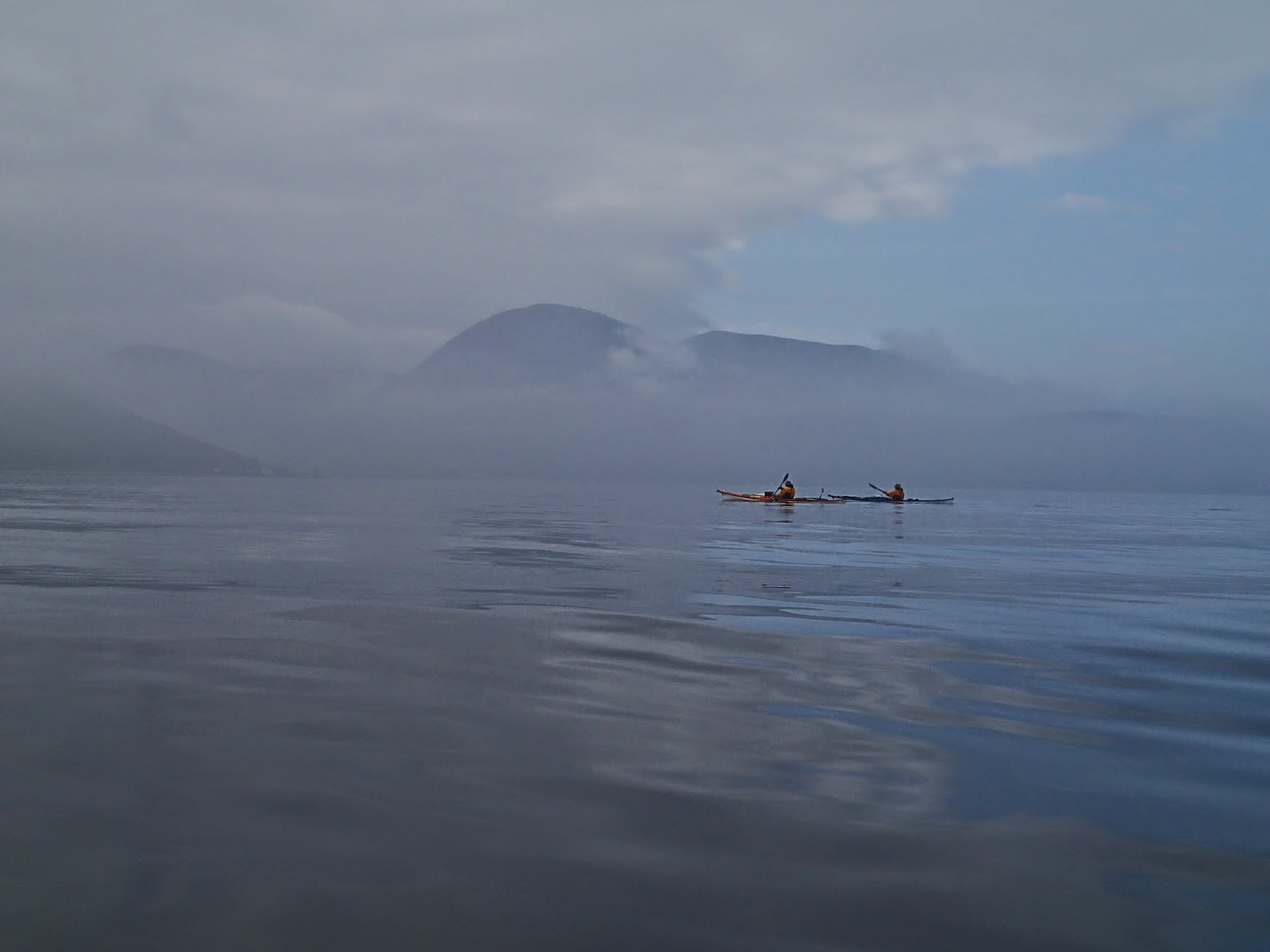 Slowly, the hills of west Arran began to emerge from the mist.  I'm not even going to attempt to describe the quality of light we experienced - my vocabulary simply doesn't extend that far.  Suffice to say that at particular moments the light itself seemed to be lit from within, a sort of double lighting effect. 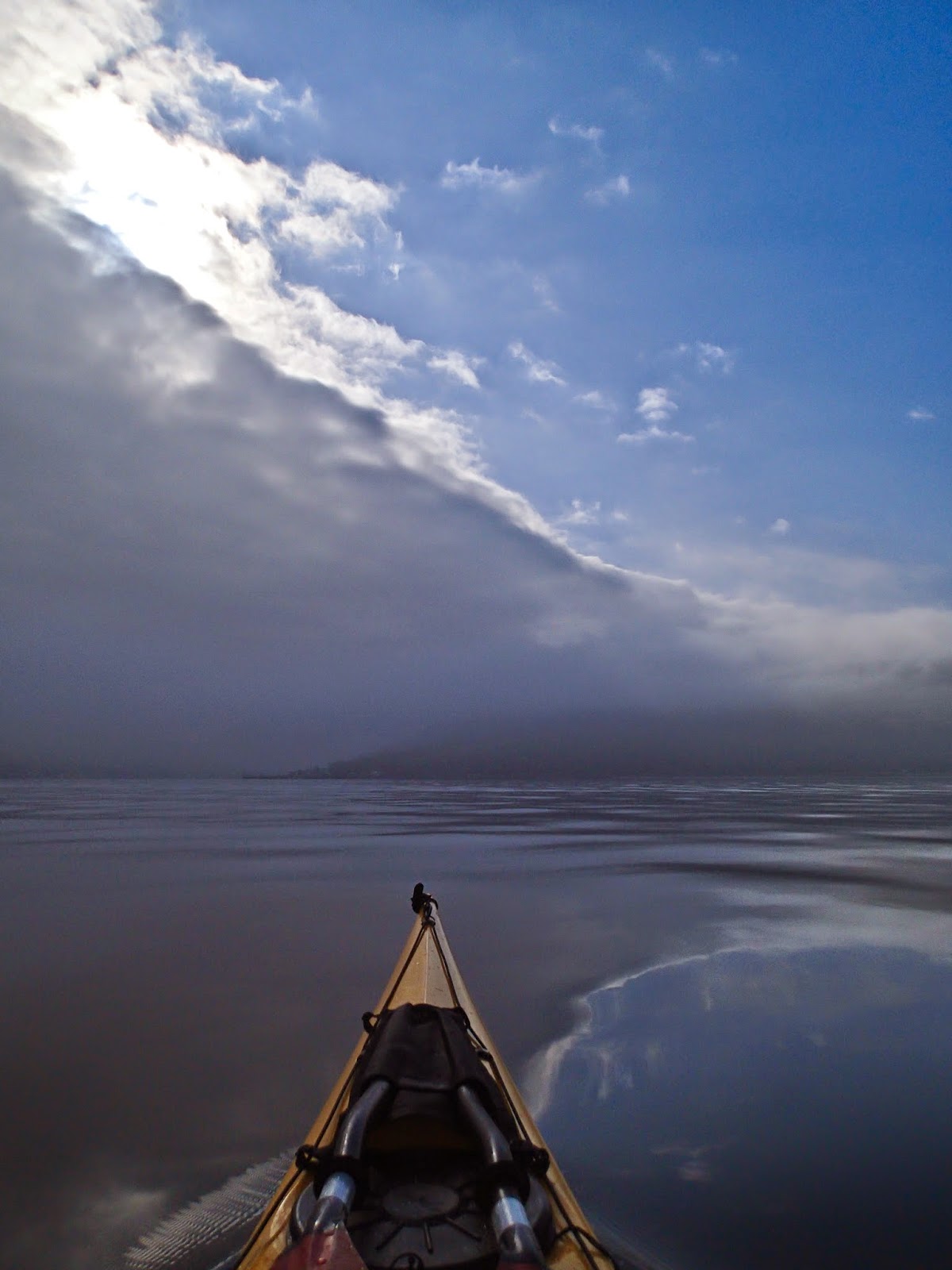 Above us the cloud sheet was drawing westward in slow majesty, the translucent light changing by the second.  We seemed to be on the edge of something greater; there was a palpable sense of something about to be revealed.  For some minutes I lay along the back deck of the boat and just watched the skyscape.  Lit from the east, the cloud sheet was slowly allowing the light to spill onto the water as it moved west.  I had the strangest sense of being drawn upwards and had to sit up after a few minutes to regain my balance. 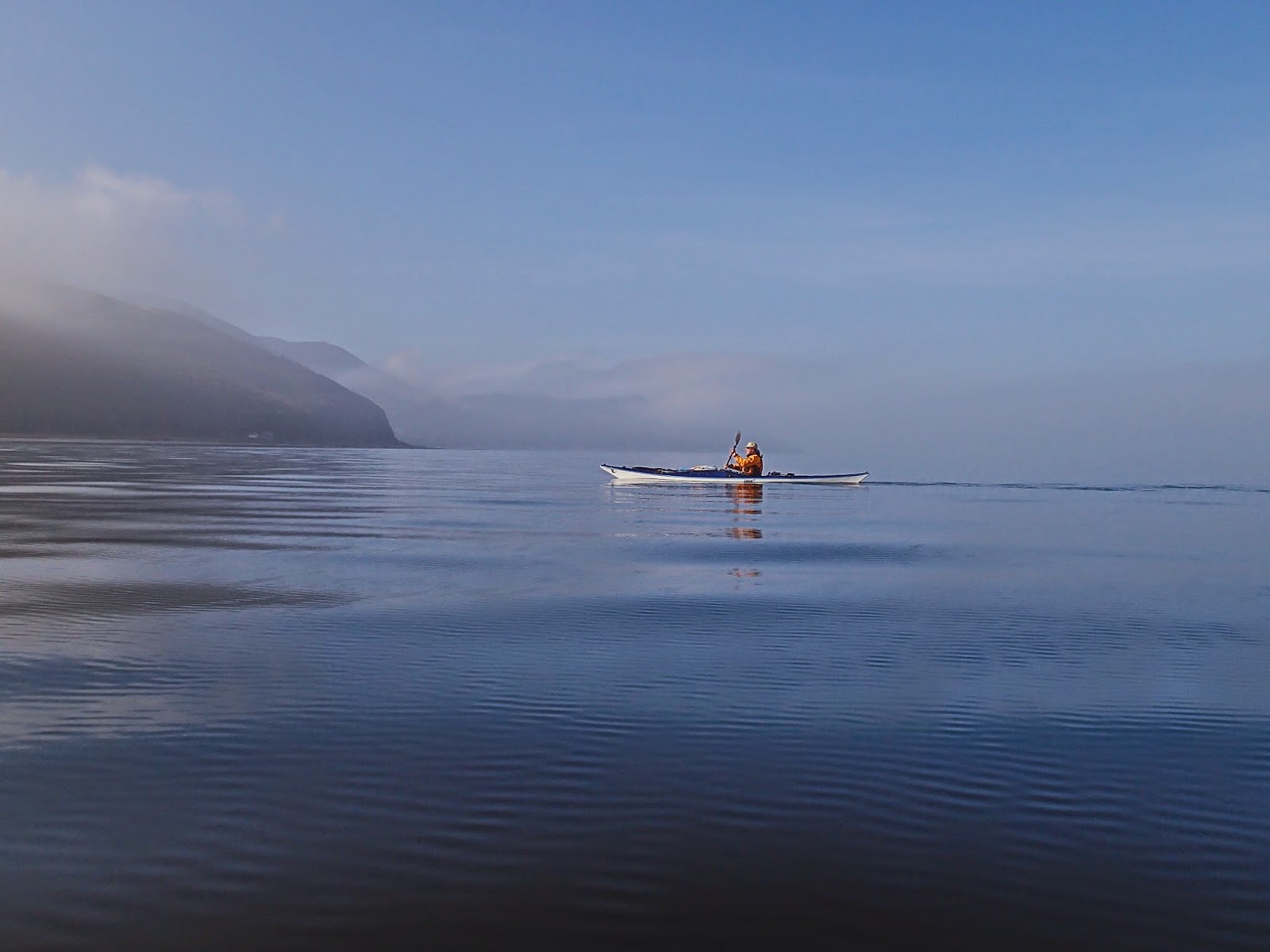 All too soon the sun emerged from above the receding cloud sheet and illuminated the whole of Kilbrannan Sound in that special clear morning sunlight.  The scene was gorgeous, but somehow couldn't match what we'd just experienced.  We paddled on in silence; lost in thought.  Any words would have been utterly superfluous.

From the first hint of a clearance in the mist to the emergence of the full morning sun had taken just forty minutes.  Those forty wonderful minutes will not soon be forgotten by any of us.


Postscript: Back at home I looked out my well-thumbed copy of W.H. Murray's peerless book "Mountaineering In Scotland" to search out a passage in which he describes a clearance of mist on a mountain top and his spiritual response to it.  Although I don't have anything remotely akin to Murray's spritual perception, for brief minutes on the Kilbrannan Sound I feel that I came close to understanding the essence of what he was conveying in this passage.
Posted by Ian Johnston at 21:06