An Arran Amble - peace and light 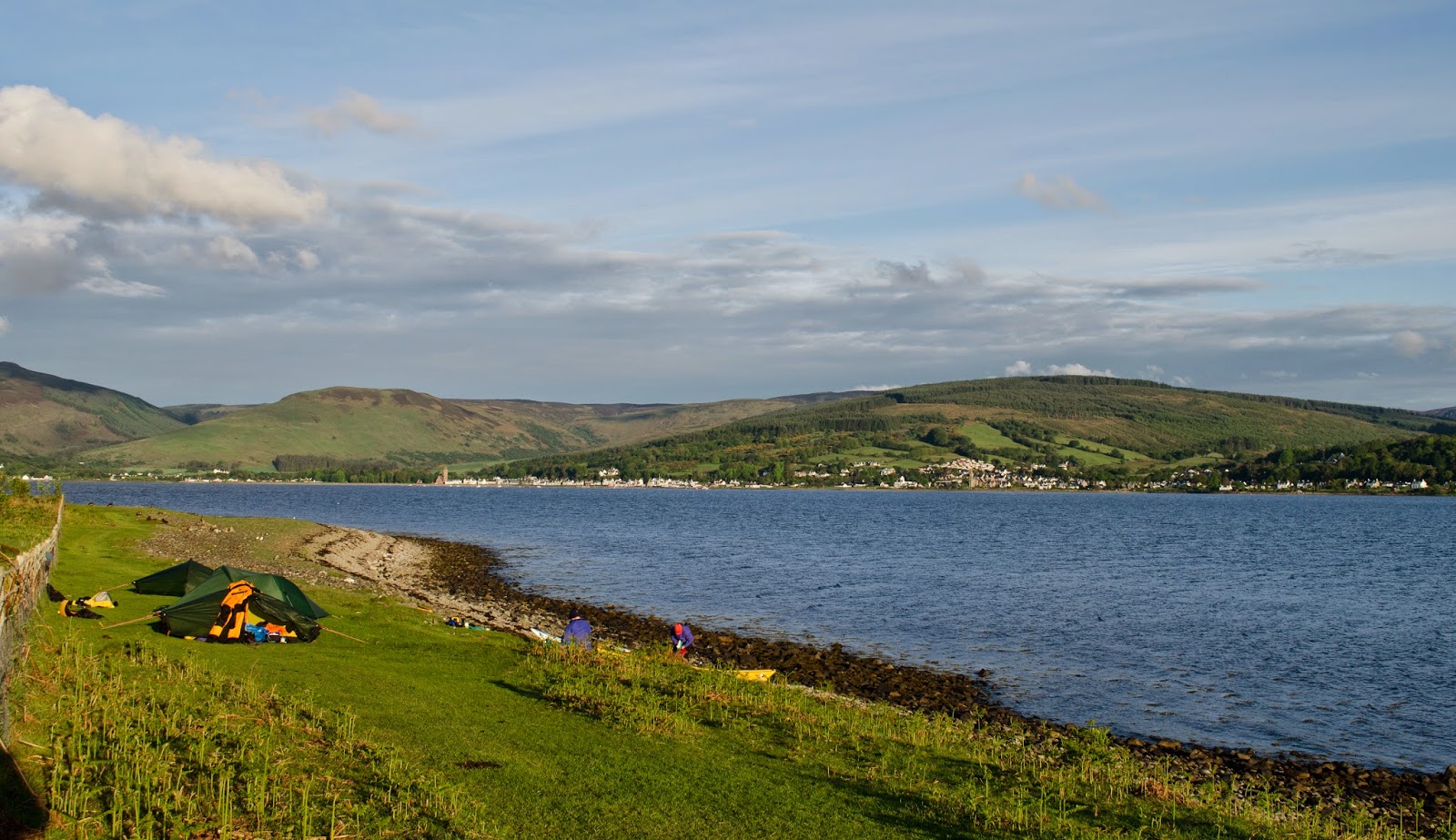 The rain passed through overnight and we woke to a beautiful morning, fresh sunny morning.

Just as we were completing the packing of the boats and preparing to leave, one of the volunteers from the Samye Ling community walked along the path around the point.  She was friendly and polite and seemed genuinely interested in our journey.  As we had already packed away our camp there would have been little point in her discussing camping, but she did take a discreet glance around our site.  No trace - it's our practice anyway and the fire we'd enjoyed the previous evening had been erased by the overnight high water.  A few minutes later and another volunteer arrived from the opposite direction; surely no coincidence.  Again, she was friendly, and learned a good deal about the island and it's history from a chat with Douglas (who has a female ancestor born on this island and native to Arran all her days).

It's clear that the monks of this community still feel that they can influence access and the right of responsible camping - we have no doubt that had we arrived early in the evening we would have had a visit from a representative asking us to move on.  We would have politely declined and exercised our right (under the law) of responsible access.

"Access rights extend to wild camping. This type of camping is lightweight, done in small numbers and only for two or three nights in any one place. You can camp in this way wherever access rights apply but help to avoid causing problems for local people and land managers by not camping in enclosed fields of crops or farm animals and by keeping well away from buildings, roads or historic structures. Take extra care to avoid disturbing deer stalking or grouse shooting. If you wish to camp close to a house or building, seek the owner’s permission. Leave no trace by: taking away all your litter; removing all traces of your tent pitch and of any open fire (follow the guidance for lighting fires) not causing any pollution."


Our camping spot was discreet, out of both sight and sound of the island's inhabitants and we moved on early in the morning.  We didn't experience any difficulty, though others have and indeed two kayakers were "strongly discouraged" (but not prevented) from camping a few nights later.  Douglas blog here has links to previous access issues on Holy Island. 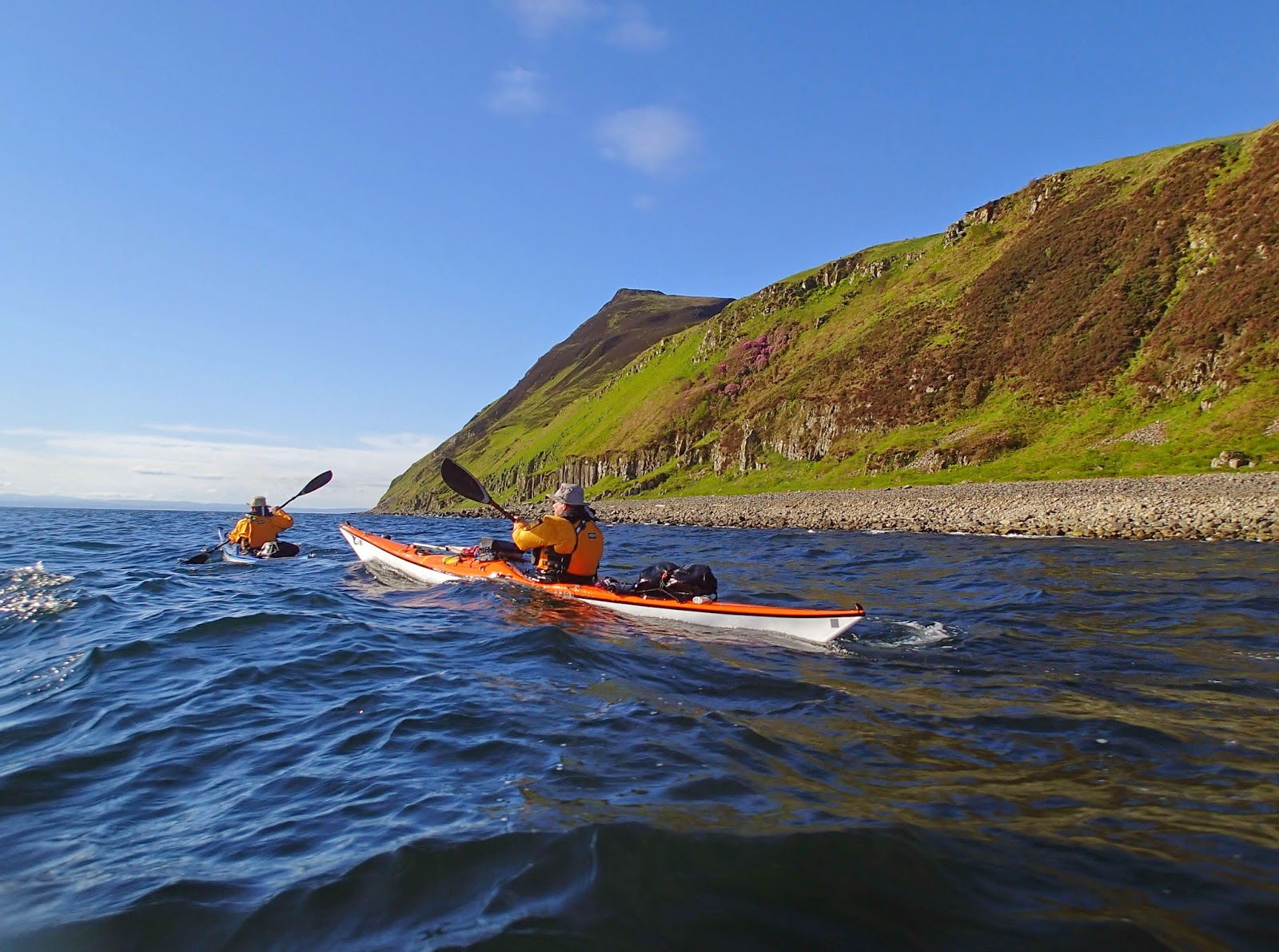 Back on the water, we paddled along the east coast of Holy Island...... 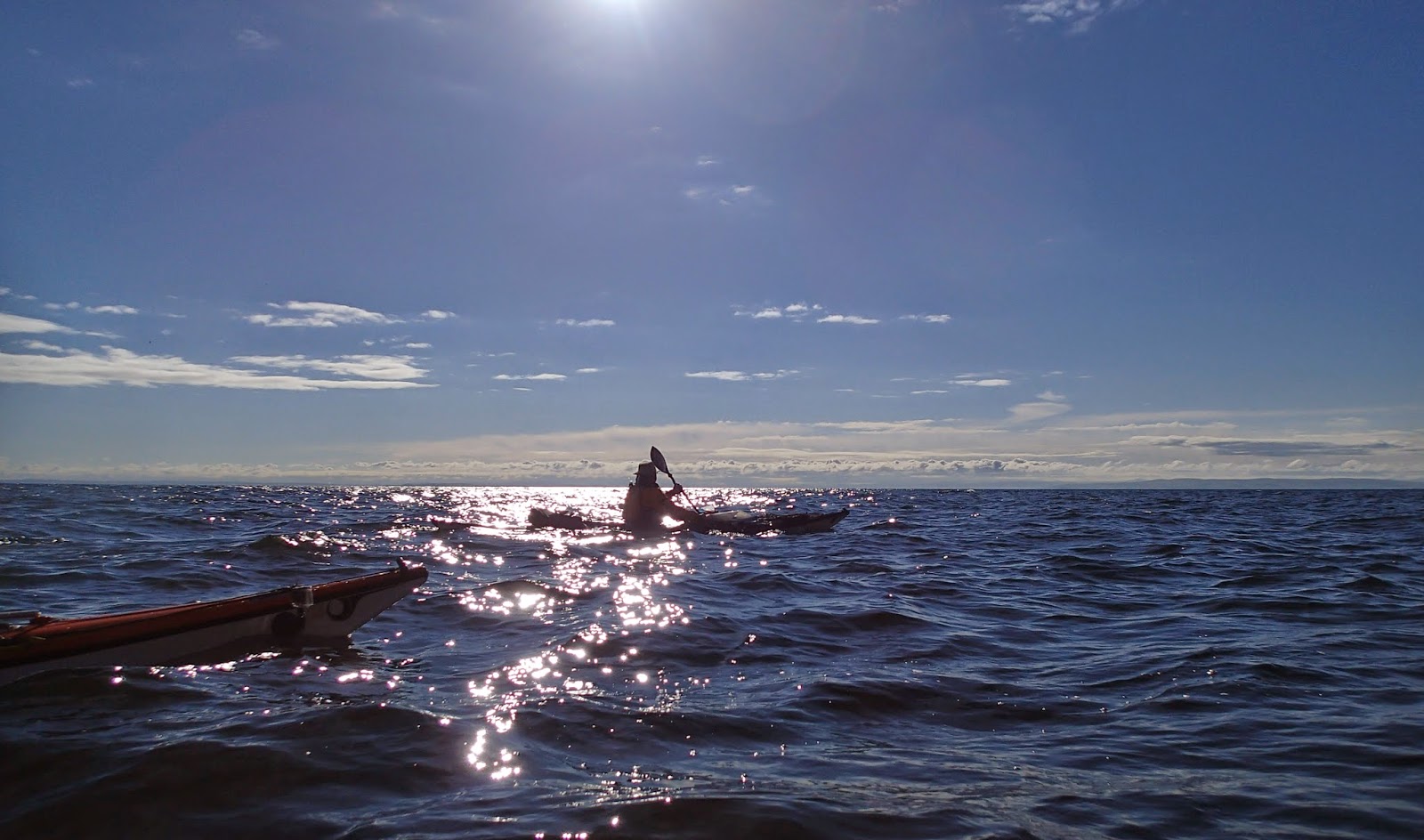 ...on a bright, glittering sea. 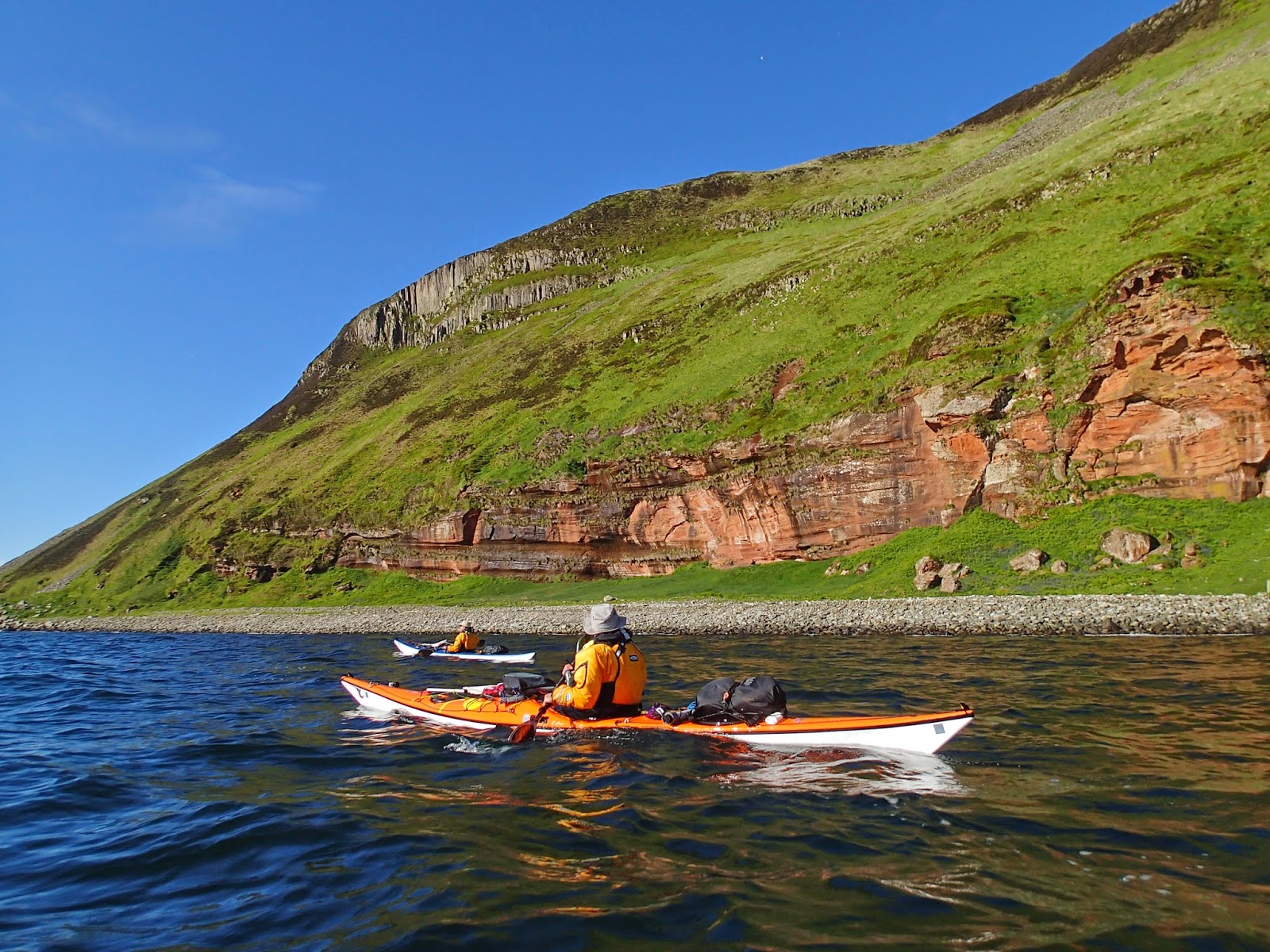 Approaching the southern end of the island we spotted one of the numerous geological features of  the Arran area; the basal New Red Sandstone of the shore overlaid by columnar basalts, the contrast is quite striking. 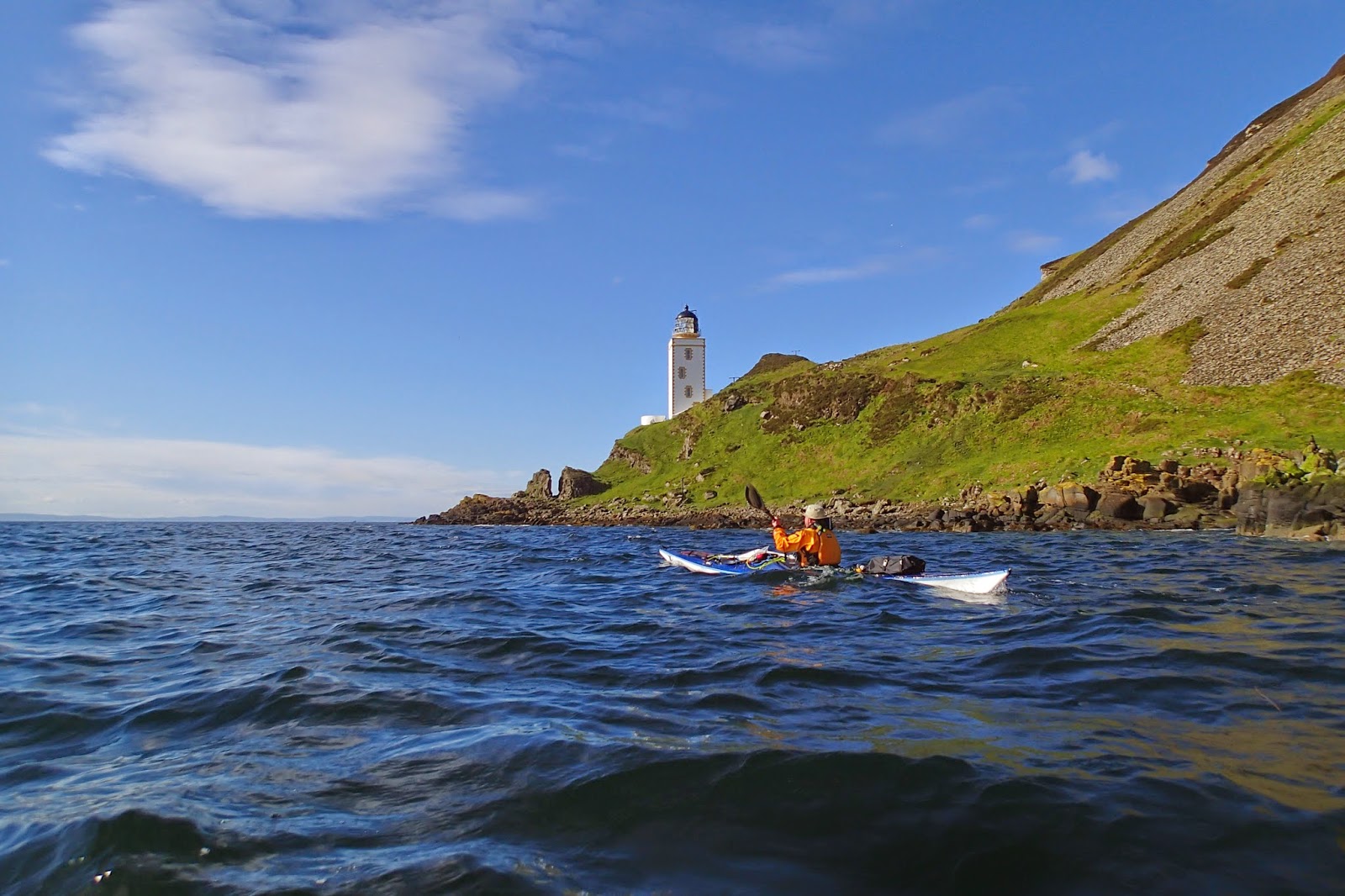 There is a lighthouse at the south-east tip of Holy Island, at the appropriately named Pillar Rock Point.  We chose not to land and explore either of the lighthouses because, though we like lighthouses a lot, these are in use by the community as spiritual retreats and we had no wish to disturb the occupants. 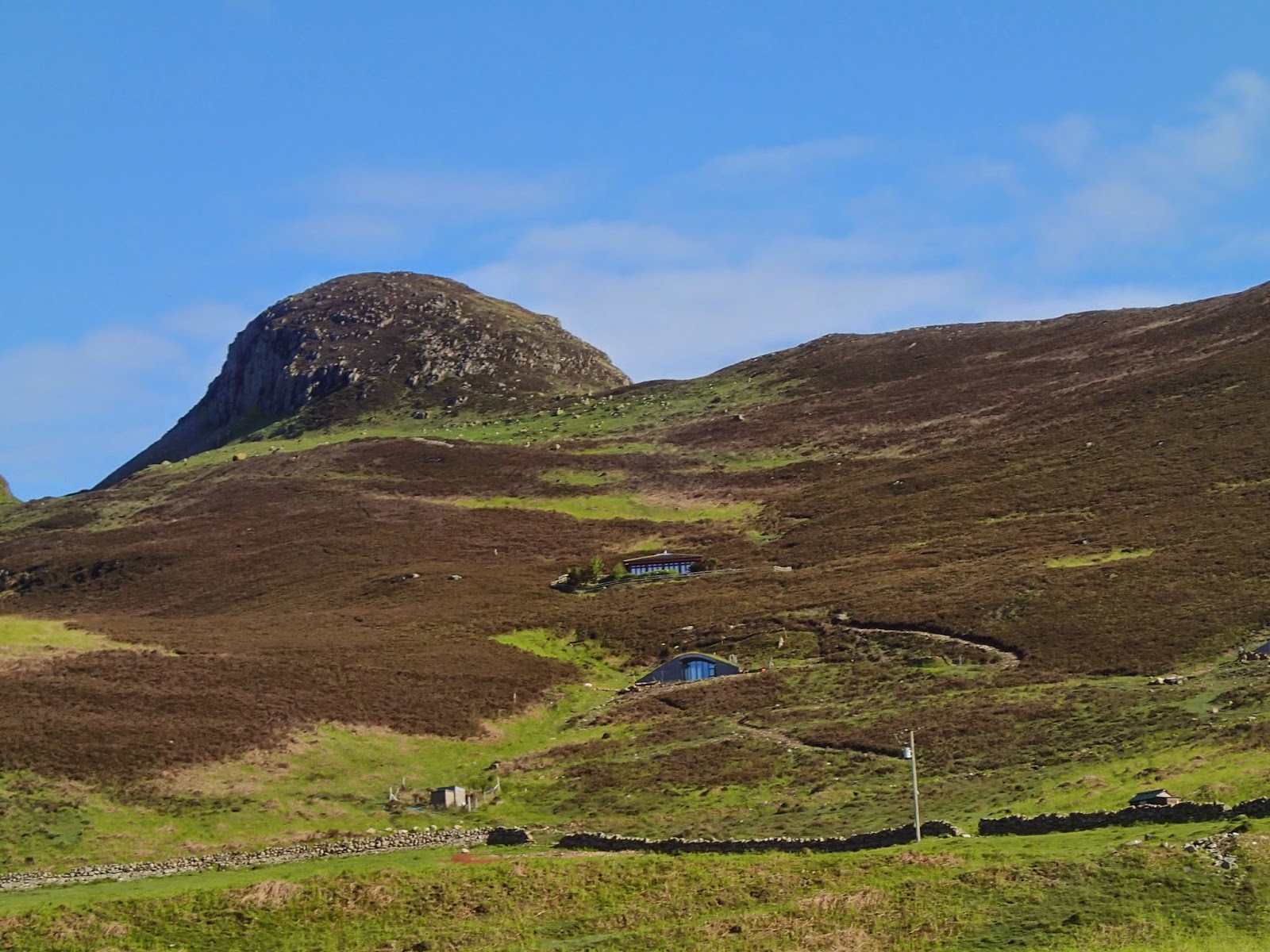 The south of the island is where some of the monks, including the abbot, live.  A winding path leads to the abbot's residence on the slopes of Mullach Mor. 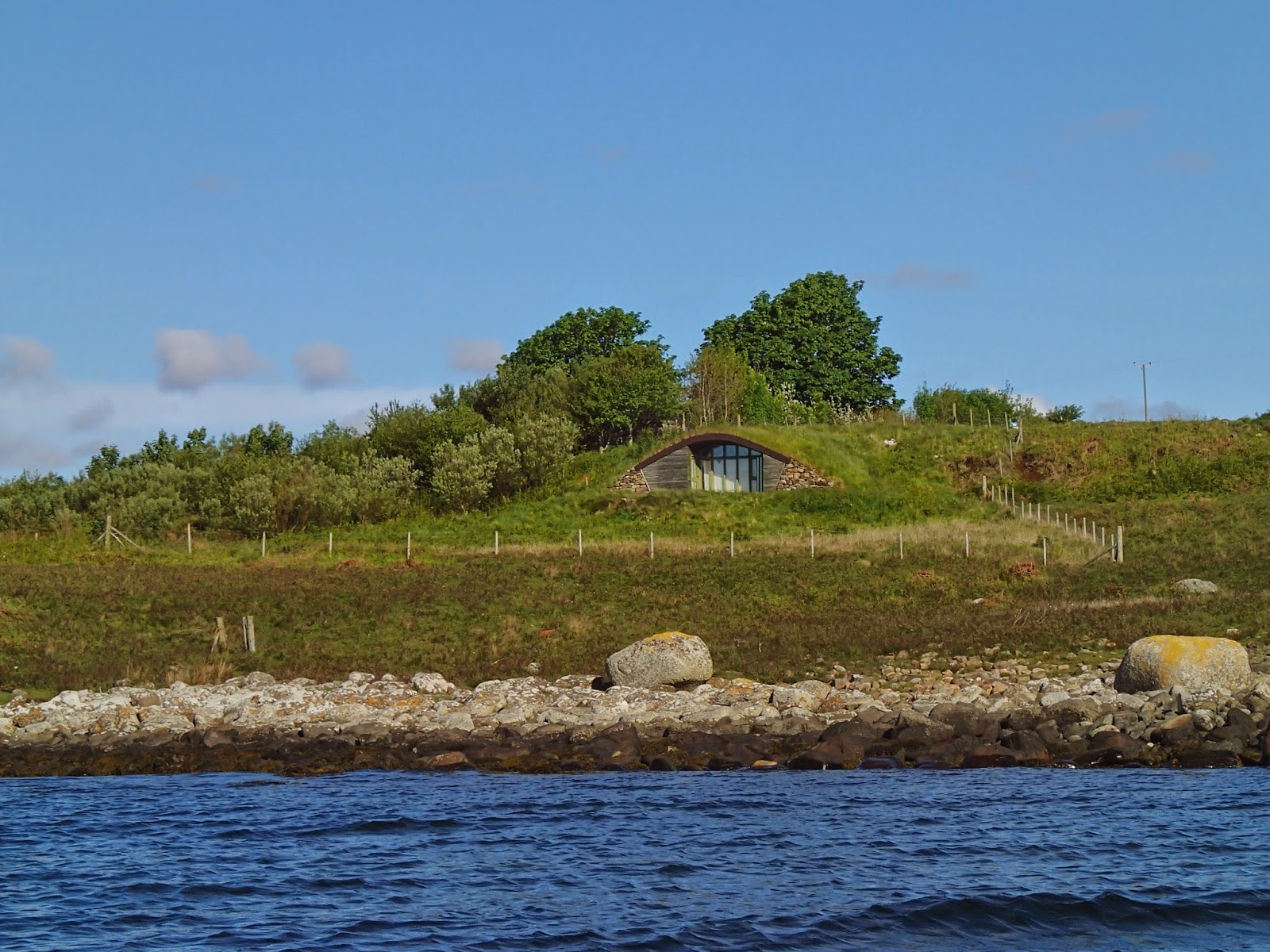 The houses here are ecologically designed and fit into the environment superbly.  The Buddhist monks aren't the first religious users of Holy Island, as the name might suggest.  In the 7th century a cave on the island was the home of St Mo Las, then in the 13th century a monastery was founded by Ranald, Lord of the Isles.  There is also evidence that the followers of  the Norse King Haakon sheltered on the island on their way home following defeat at the battle of Largs.

Apart from these houses at the southern end of the island, most of the present day infrastructure is in the north of Holy Island where the monks have founded a Peace centre.  Dry stone dykes have been repaired, the orchard restocked and a vegetable garden provides food.  Thousands of native trees have been planted; the presence of the Woodcock we saw is an indication that the woodland is well established.  Environmental considerations are important to the order; water is supplied by springs, heating is by solar panels and sewage is treated in reed-beds.

There is much to admire about the Samye Ling order's stewardship of Holy Island; we hope that in time they may become more tolerant of the occasional sea kayaker passing through on a journey, and abide by the spirit and letter of Scotland's Access law.. 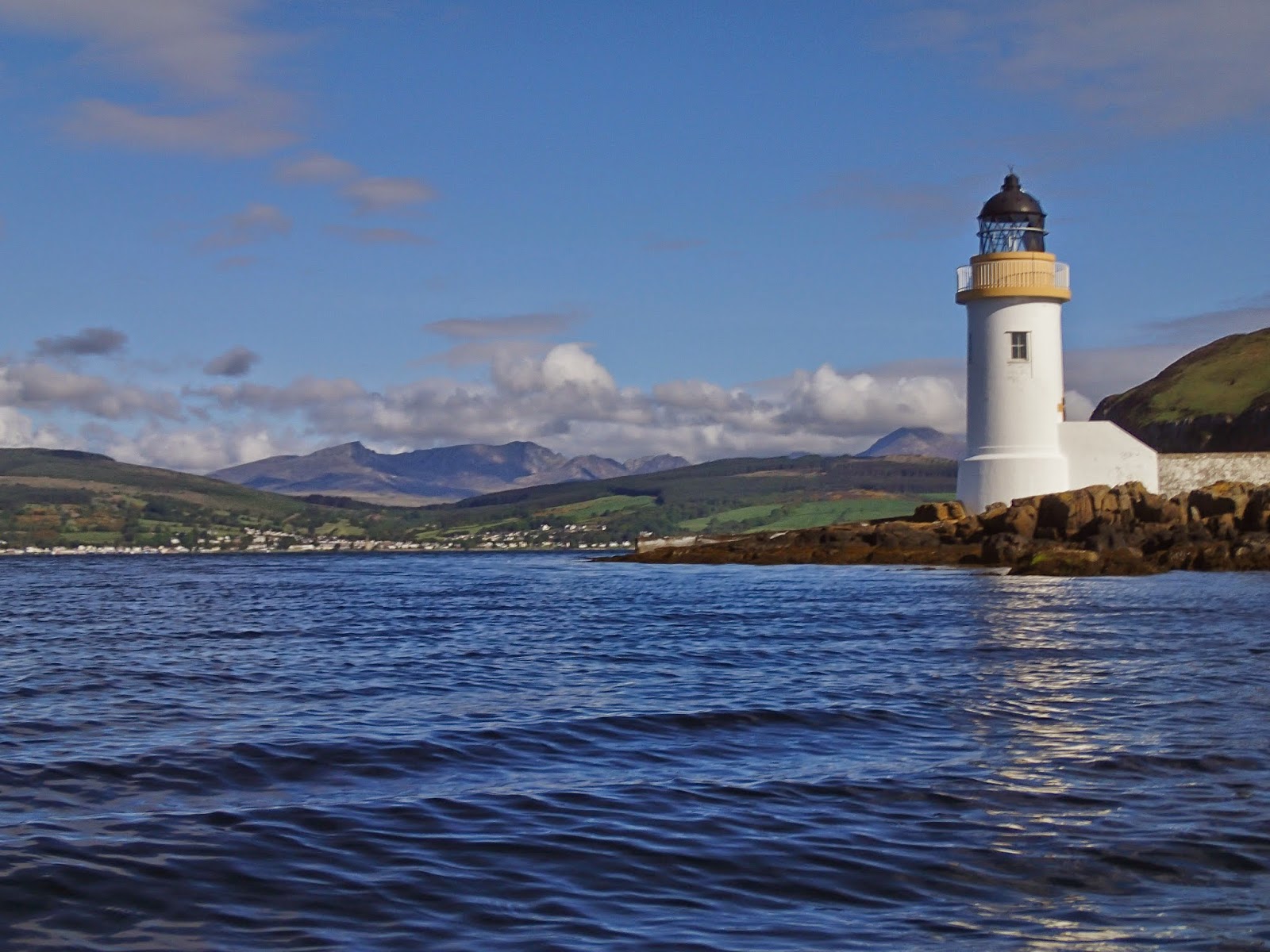 Given the Buddhist owners, it's perhaps fitting that the other lighthouse on the island is the Inner Light; and as it is passed a superb view of Arran's hills opens up.  We left Holy Island with our own small sense of peace and light.
Posted by Ian Johnston at 09:24