Around Kerrera to Oban 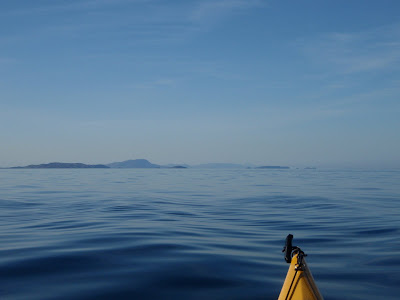 Leaving Lismore early to take advantage of the last of the ebb, I made a 9 km crossing of the Firth of Lorn towards the south end of Kerrera. To the west, the view opened up to Seil, Luing, the Garvellachs, the Paps of Jura and the distant smudge of Colonsay on the horizon. It was glassy calm. 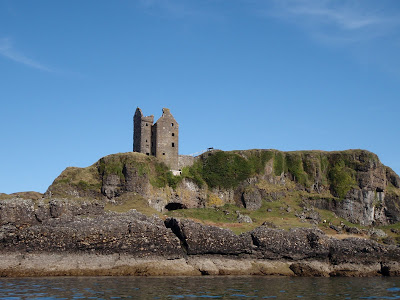 Travelling along the south coast of Kerrera, Gylen Castle came into view. Yet another MacDougall stronghold, it was besieged by General Leslie's Covenanting army in 1647. The garrison surrendered, but the local minister persuaded the Covenanter troops to massacre the prisoners. There were no survivors.

It's a difficult landing below the castle, so with a boat full of kit I decided against trying. I found a better spot for a rest stop in the Sound of Kerrera. The island is easily visited from Oban, and has a range of walks with great views.

Oban bay was a complete contrast to the paddling of the previous couple of days. There was lots of boat traffic and bustle. I paddled across the bay and out ot the north channel, heading back toward Ganavan Bay. 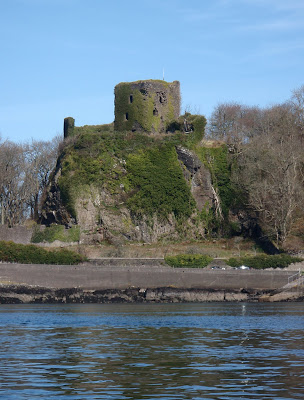 Dunollie Castle guards the north channel. Yes, it's another MacDougall fortress! Originally built in the 13th Century, the main ruins date from the 15th Century. 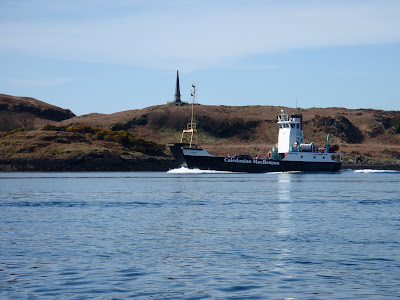 On the Kerrera shore, the Calmac ferry MV Eigg passed the Hutcheson monument. David Hutcheson founded one of the companies who would eventually form Caledonian MacBrayne.

Just around the headland, I arrived at Ganavan Bay to end my short trip. It was a glorious sunny day and the sandy beach was well populated with sandcastle builders and even the occasional hardy person risking a swim.
I'd paddled 70km over the two days and a bit, had wonderful views, great weather - and the midges aren't around yet!