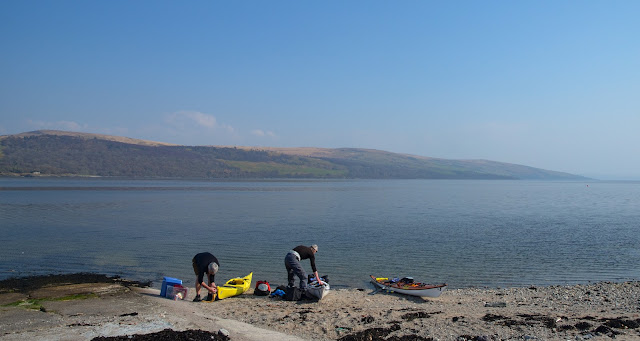 The third week of March promised some very fine and warm weather in Scotland.  Having studied the forecasts and checked availability we decided on a sea kayak trip over four days and three nights in the Firth of Clyde and Loch Fyne.  Allan, Raymond and I would start near Tighnabruaich in the West Kyle, Donny would launch his F-RIB from the same spot and Douglas and Mike would kayak from Portencross on the Ayrshire coast to join us for an overnight camp.

Our planning was very flexible, there was no fixed itinerary other than getting out on the water for a journey and to enjoy the fine weather.  From previous knowledge of the area we had several potential wild camp sites in mind for our first night and were able to keep in touch through the day to decide which one would work best for our varied starting points and times.

It's a fair drive from Aberdeenshire to Tighnabruaich, but Allan and I made good time and after stopping for brunch en route we were packing the boats shortly after 1pm - Raymond arrived a few minutes after us from his home near Stirling. We noted Donny's car in the parking area so he was on the water already, a message from Douglas and Mike indicated that they had set off late morning and the weather could not have been better....the plan was coming together! 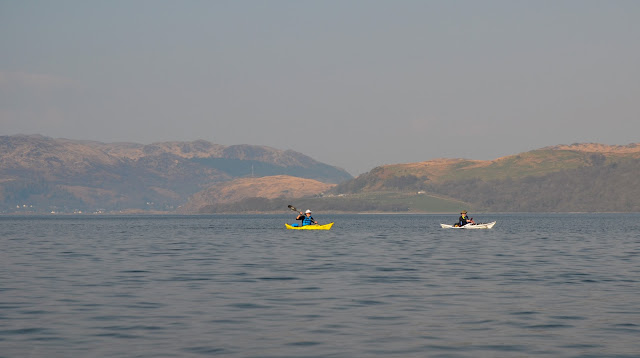 We paddled south down the West Kyle of Bute and past Ardlamont Point into open water at the mouth of Loch Fyne, it was a cracking day to be on the water. 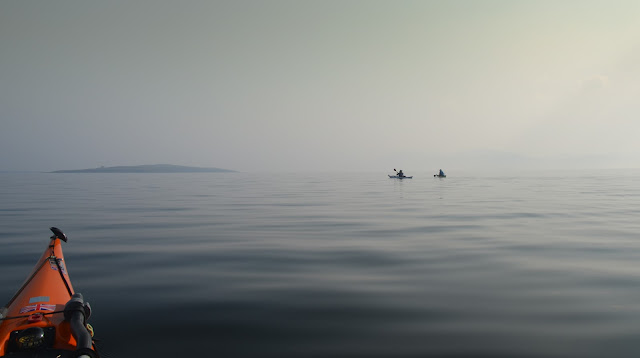 The slight breeze dropped completely as we crossed to the north end of the island of Inchmarnock - a couple of messages exchanged just as we set off had confirmed our meeting point as the south end of the island where we knew we'd get a good camp site provided that it wasn't inhabited by cattle. 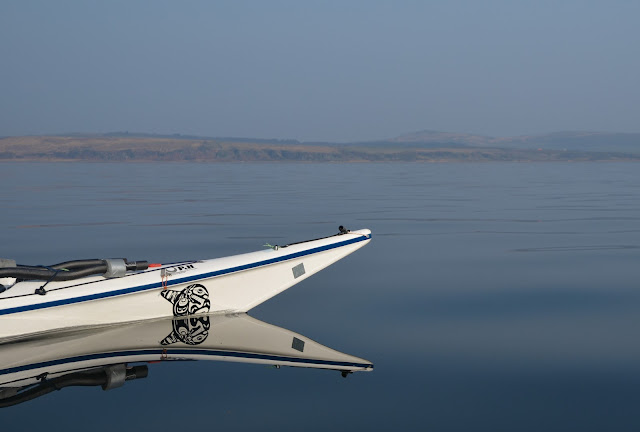 We couldn't quite believe the conditions we paddled in...warm sun on the face, a heat haze and perfect reflections on mirror calm water.  All the more remarkable, conditions were due to be similar for the whole week - and the clocks hadn't even gone forward! 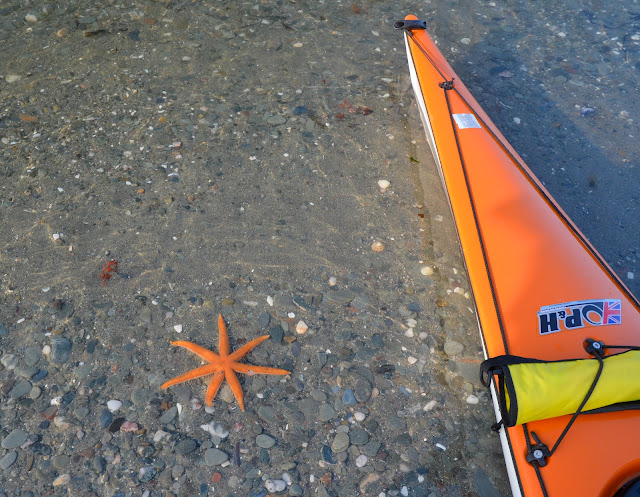 We landed at the shingle spit at the north end of Inchmarnock for coffee and a leg-stretch, greeted by this bright orange Seven Armed Starfish (Luidia ciliaris) which was a very neat colour match with the deck of my Cetus MV.

"Inchmarnock" means Marnoc's Island and is named for the Celtic monk St Marnoc.  His name appears in several other place names in south west Scotland including the town of Kilmarnock.  Near where we landed a stone "cist" or burial container was excavated to reveal the remains of a Bronze Age lady buried with a jet bead necklace and a finely made dagger.  the remains were carbon dated to about 3500 BC and the lady (subsequently named the "Queen of the Inch") re-interred beneath a heavy glass pane. 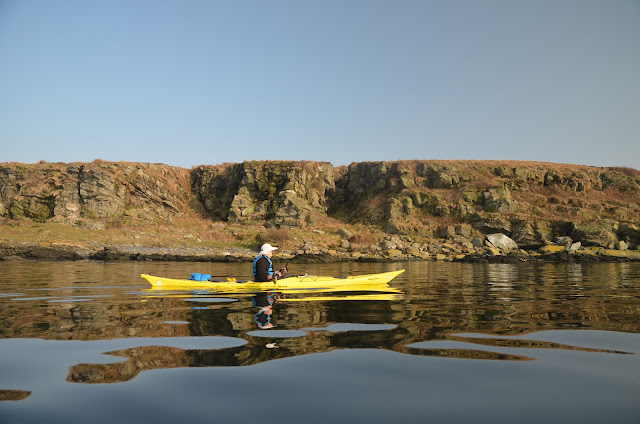 Rested and refreshed, we paddled at a relaxed pace down the west side of Inchmarnock, sighting deer and a Peregrine Falcon along the cliffs.  It didn't feel like an afternoon to be rushing along. 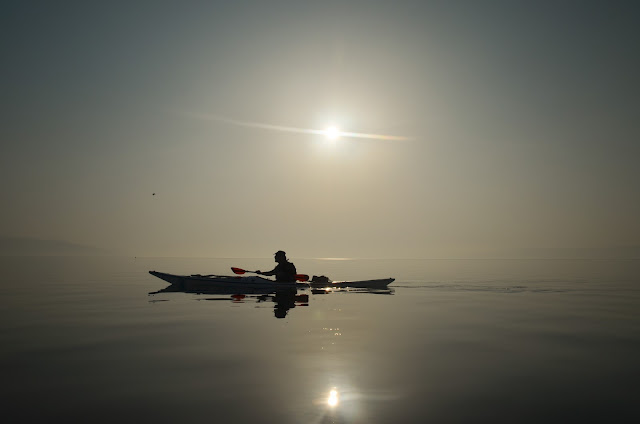 In fact, quite the opposite, this was an afternoon to take things very easily and to enjoy the beautiful weather. 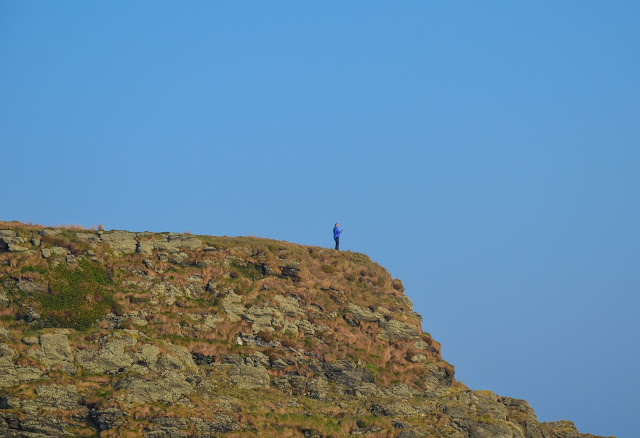 A call on the VHF radio from Douglas alerted us that we were just a few hundred metres from the beach above which we'd camp for the night.

Douglas took this wonderful panoramic image of Allan, Raymond and I just about to arrive at the camp site; I think it really sums up the day and the superb position. 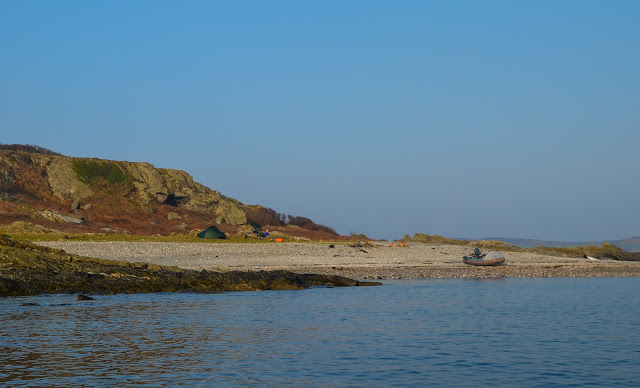 From the water the position is no less superb, a gently shelving shingle and pebble beach with an area of flat turf above.  This place is sometimes frequented by the herd of Luing cattle which are grazed on Inchmarnock - this breed can be aggressive and don't make good neighbours if camping.  It's their home, so if they're around we go elsewhere to camp! 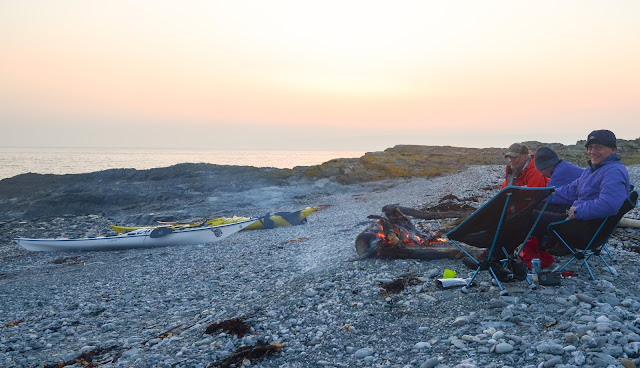 After putting up our tents and settling in we joined Douglas, Mike and Donny for dinner around the camp fire.  this early in the Spring there was plenty of driftwood for a fire to be lit below the high water mark.  Raymond, Allan and I had each cooked a fresh meal for one night of this trip - we started this evening with a chilli con carne and rice, accompanied with a glass of red wine - no need to rough it!
This trip was significant for a couple of reasons, the first being that this was the first time we'd been out together for some time, and the first overnight trip of the year for most of us.  The second reason was that all the people on the trip apart from me are retired or semi-retired....and I was imminently to retire.  So, this was a very special induction into the club! 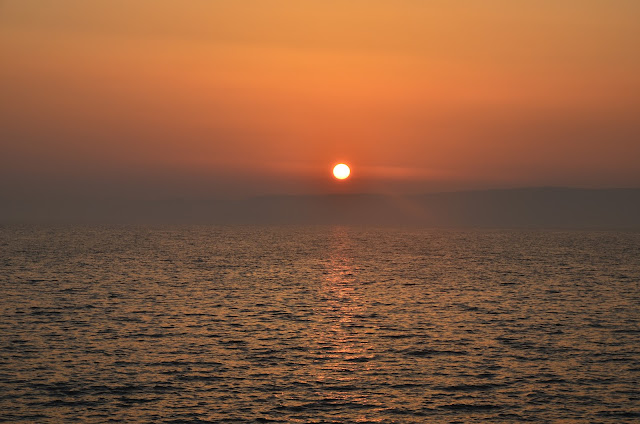 Sat by the fire on a lovely evening in a superb location, sharing a dram with good friends....I think I could get to like this retirement thing! 😊
Posted by Ian Johnston at 12:54