To hell in a hailstorm 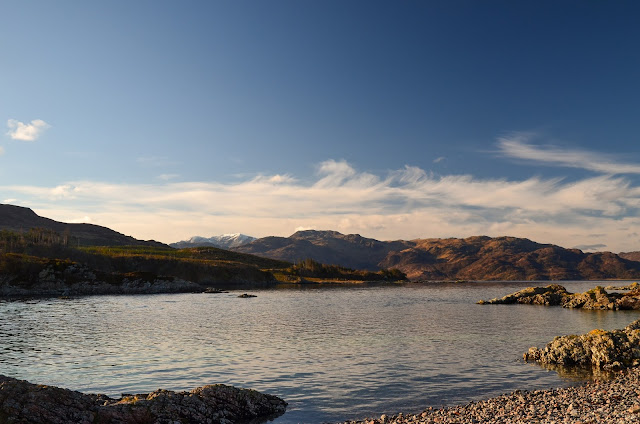 After a chilly night, we woke to a lovely morning at our camp on the Sound of Sleat.  Handily, as it was Springs the tide would be fairly high in the mornings meaning that we'd only have a long carry with our boats at one end of each day of our trip. 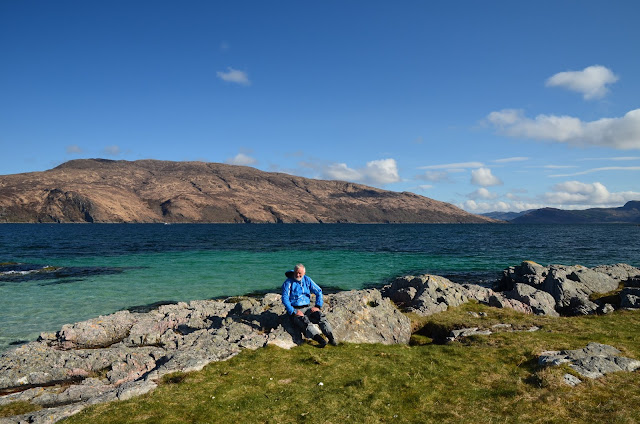 The cool air was very clear and every colour was really "zinging" - Raymond's paddling attire of sea-blue top and grey trousers were in perfect colour coordination with the scenery! 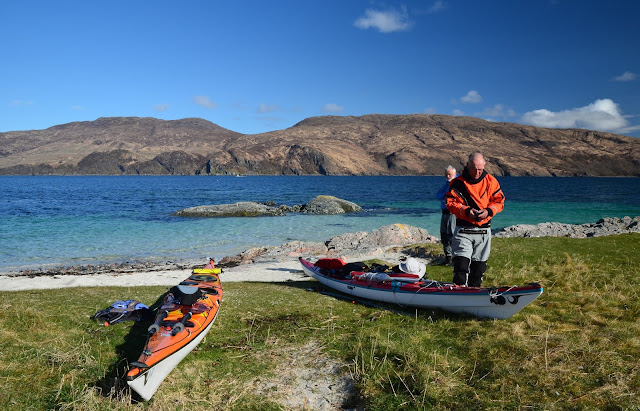 A leisurely breakfast taken, tents down and final preparations complete, we had just a short carry with our heavily laden boats to the water..... 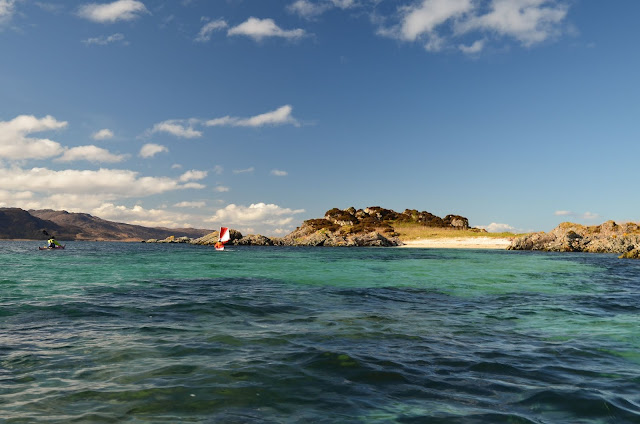 ...and soon were off down the Sound in truly glorious conditions. 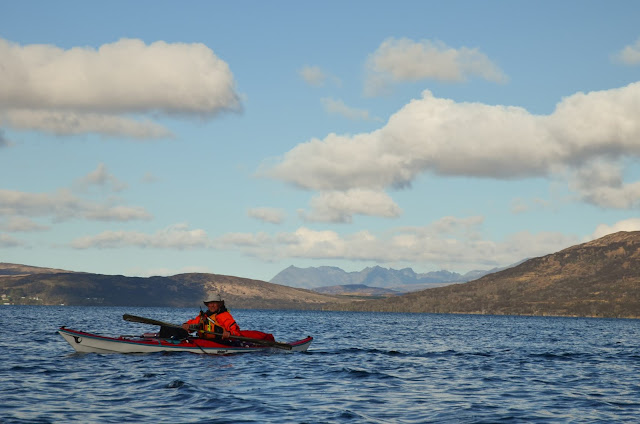 As we paddled south a view opened up through a gap in the hills to the Cuillin of Skye, the iconic skyline drawing both eye and memory - what days have been enjoyed on that ridge! 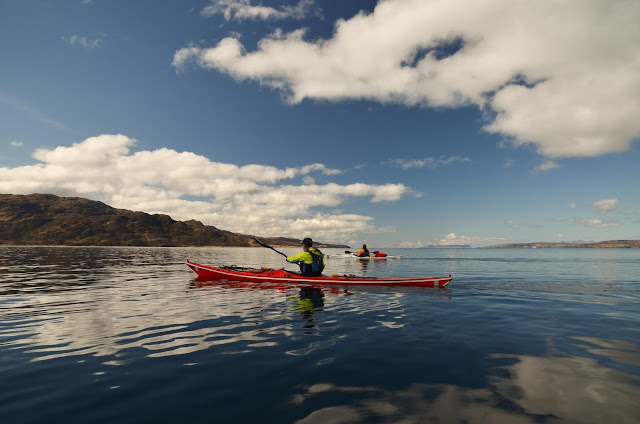 Our route took us south across the mouth of Loch Hourn which the previous afternoon had been whipped by a strong wind and raked by steep breaking swells.  No such issue this morning though as we paddled the 4km wide mouth in flat calm conditions.

A glance over the shoulder stopped us in our tracks as a more open view of the Black Cuillin opened up, the main ridge to the left with gars Bheinn prominent at the end of the ridge and the mighty Blaven with Clach Glas on the right. 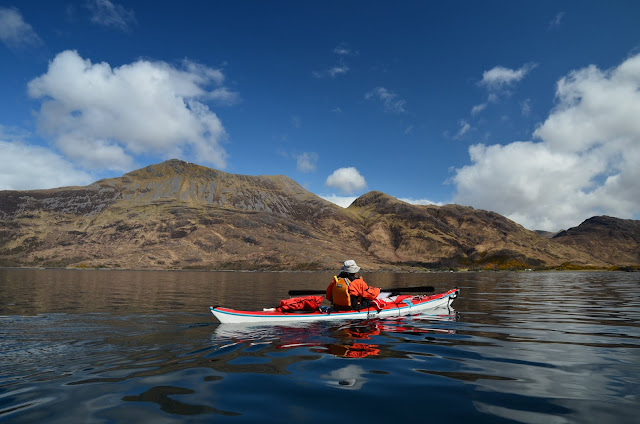 After a coffee stop on the south shore we turned our bows inwards and headed along the south shore with the sun at our backs and a view across to Beinn Sgritheall (Scree hill) - one of the loosest mountains in Scotland to climb - it does what it says on the tin! 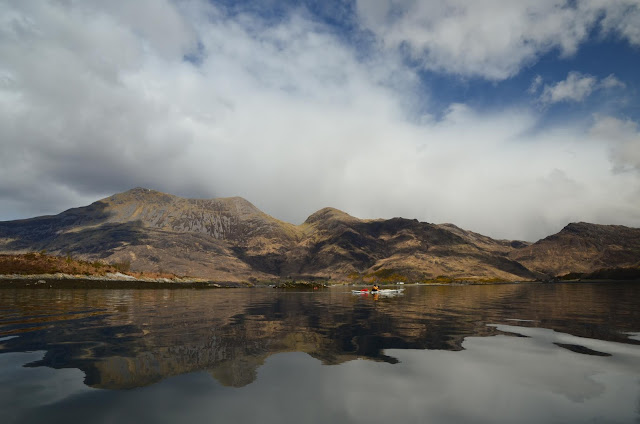 Conditions were very atmospheric, alternating between warm sunshine and chilling air as snow and hail showers passed.  Remarkably, we were missed by all of these through the morning. 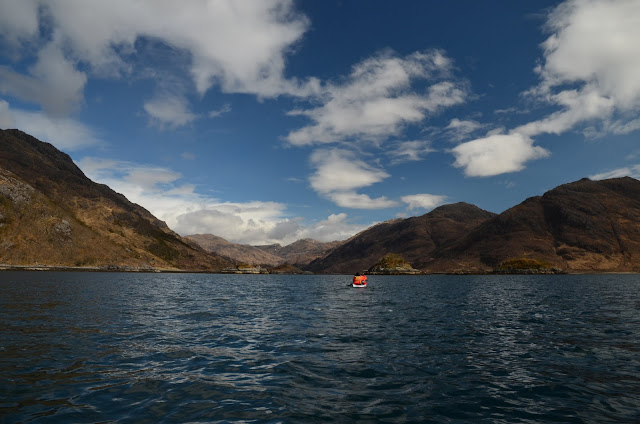 After a lunch stop we paddled into Barrisdale Bay where Loch Hourn takes a twist and becomes very fjiord-like.  Initially it's difficult to make out the route through the Caolas Mor (big narrows) but it soon becomes clear as one approaches.  The channel is only a few metres wide and has very strong tidal flow; we'd timed our passage here carefully.
Loch Hourn has a well-deserved reputation for fierce weather - indeed one translation of the name is Loch of Hell!  Situated on the edge of Knoydart which "enjoys" the highest rainfall  anywhere in the UK with annual totals exceeding 4.5 metres.  The loch's position sandwiched between high mountains, west facing aspect and narrow topography result in fierce winds and squalls....as we were about to rediscover!  Although the weather here can be superb for many days on end - that's not the norm..... 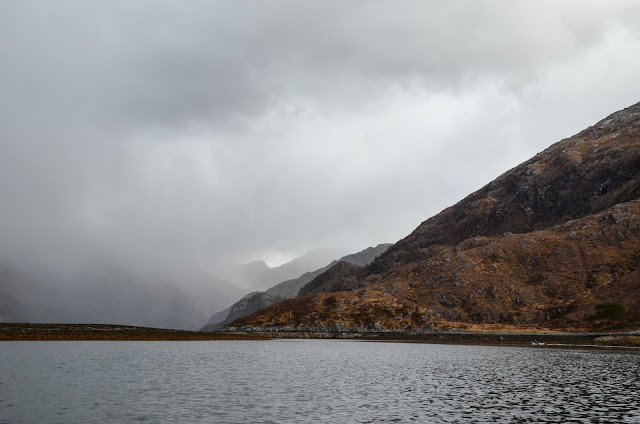 We arrived at the narrows just as a squall gathered at the head of the loch and swept down towards us.  Donny had already gone through in his F-RIB and pulled into the shore to sit it out.  Douglas and I were already into the throat of the channel, which is just a few metres wide, when all hell broke loose.
The squall arrived with an instantaneous rise in wind and a frightening roar.  We simple bowed our heads into lashing hail and tried to hold position by paddling hard.  For fully ten minutes we were battered by wind, hail and spray - then just as suddenly as it had arrived, it passed.  We all gathered on the shore of the spit at Caolas Mor, a little battered and more than a little chilled.  We decieded that the best course of action would be to warm up by doing some more paddling and so got back in the boats and headed farther into the narrow upper loch. 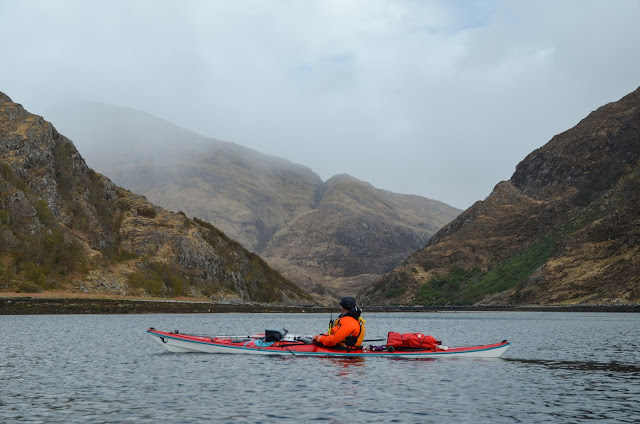 We made it as far as another narrows leading to the tiny Loch Beag and the road end at Kinloch Hourn.  This is one of the more remote spots in Scotland...although we were just 2km from the end of a road, that twisting, precipitous and narrow ribbon of eroded tarmac goes through totally empty country for fully 37km/23 miles before reaching a main road.  The ebbing tide was pouring out from here and the whole area dries out at low water - we could go no further.  Turning back, we headed down the ebb tide towards our intended camp site.
Posted by Ian Johnston at 21:38