Time and tide on the shore of Loch Hourn 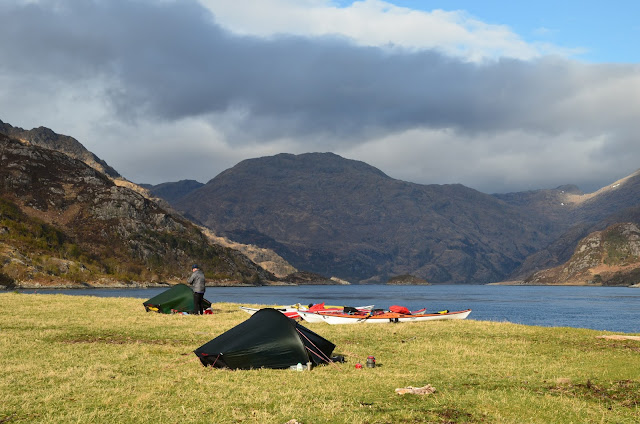 A leisurely paddle back along the shore of upper Loch Hourn took us back to our intended camp site on the point where we'd sheltered from the worst of the earlier squall.  The kayakers could carry our boats above the tideline, Donny moored his F-RIB "Guppy" in a small bay close by where it would be well out of the tidal stream.  There was plenty of space to camp here and good ground to pitch our tents; we got set up and did the usual sorting of kit after a day on the water.
I really enjoy this aspect of trips whether by kayak or on foot - a reasonably early arrival at camp with time to enjoy the evening and to appreciate the setting.  This is a pretty remote spot, takes a bit of getting to and is well worth spending some time at.  The flow of the tide past the camp was quite hypnotic, it was fascinating watching the development of boils and swirls on the ebb and then the flood.

Through the early evening and while there was still some energy in the weather we were treated to a wonderful range of light as showers built over Kinloch Hourn.  The area around Loch Quoich gets some the highest rainfall totals anywhere in the UK and is used to "head" hydro power schemes - there's often plenty of energy potential falling from the sky! 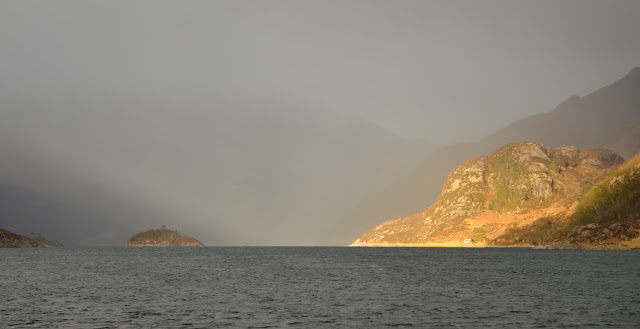 We were pleased to see the showers remain concentrated at the head of the loch while we stayed dry and in a light breeze. It wasn't particularly warm, but cool and dry was fine by us. 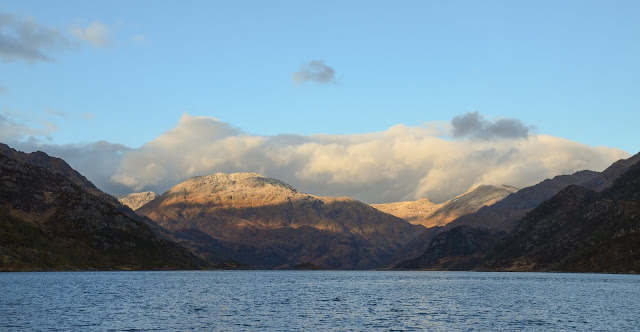 As the sun dipped, the shadows deepened and increased the contrast with the sunlit hills, the highest of which still had a smattering of white from the earlier hailstorms - it was developing into a lovely evening. 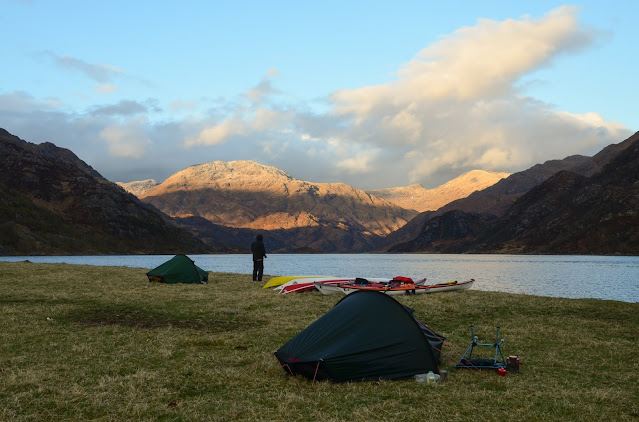 After a dinner of home-made chilli  followed by baked fruit and custard, both kindly supplied by Raymond we secured the boats for the evening and made our way down below the high water mark to light our fire.  This early in the season there was no shortage of firewood - which as things turned out was a good thing. 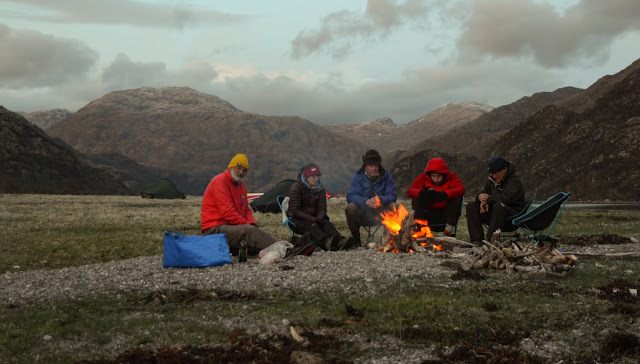 We lit the fire right on the previous evening's tide mark, but miscalculated by about 30 minutes of tide....with the result that we experienced "the lost fire of Loch Hourn"!  Managing to rescue some hot embers, we re-lit a fire on the shingle further up, but still below the Spring tide line.  We were glad of that fire, it was a fairly cold evening with a chilly breeze and though enjoyable to sit around chatting after so long apart, we didn't stay up too late.  The cloud began to dissipate as we were heading for our tents and we had hopes of good weather the following morning.  We were certainly not to be disappointed.....
Posted by Ian Johnston at 19:38