Through both lockdowns I've been exploring local hills and routes and there will be a whole series of "catch-up" posts at some point.  Great as this was, it was a relief to get to the point where travel restrictions could be lifted and we could get "away".
In the week that Covid-19 restrictions were lifted sufficiently to allow travel outwith our own local authority area, Lorna, Allan and I met at Inverness and drove on to meet up with Douglas who'd travelled from south Glasgow, Raymond who had travelled from north Glasgow and Donny who had come up from Taynuilt near Oban.
You'll be able to follow this trip in "Sea Kayak tri-vision" by checking out Douglas' blog starting here, and Donny's Youtube channel here. 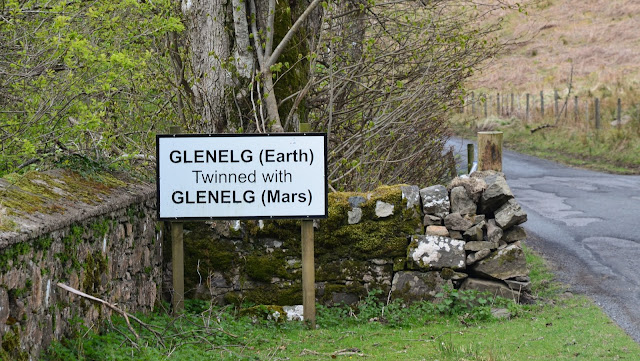 Our rendezvous at Glenelg takes some getting to; down the main road towards Skye and then a twisting drive on the single-track road over the 339m/1112ft pass of Mam Ratagan.  Mind you, it's a lot closer than the twinned location on Mars!  The strange association was instituted in 2011 when NASA was looking for a palindromic name for a location on the Martian surface which the "Curiosity" rover would visit twice - and Glenelg is Scotland's only palindromic place-name.
We parked our cars at Bernera beach and checked with a local lady that they'd not be in anyone's way for a few days.  We took our time packing, it's been over a year since we last packed boats for a multi-day adventure!  Finally all was ready.  Our friend Donny was using his 2.75m folding RIB (F-Rib) "Guppy" and set off a little ahead of us to play in the tidal stream at Kylerhea.  We'd timed our departure to take advantage of the last of the south going tide which would push us down the Sound of Sleat (pronounced "Slate") towards our intended camp site for the first night. 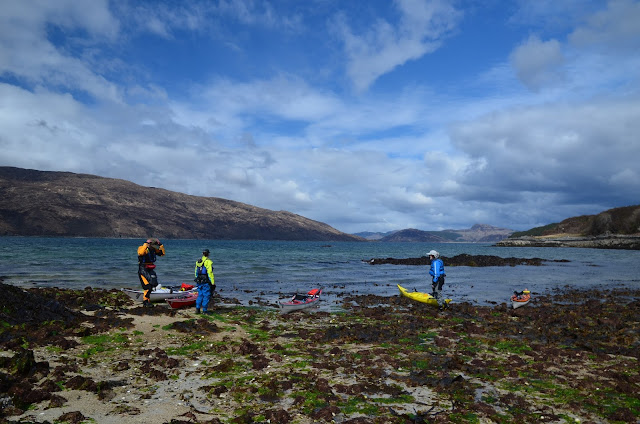 We'd deliberately scheduled a short first day as we didn't set out until early afternoon.  A couple of hours of steady paddling got us back in the rhythm of travelling in fully laden kayaks and it wasn't long before we reached our intended camp. 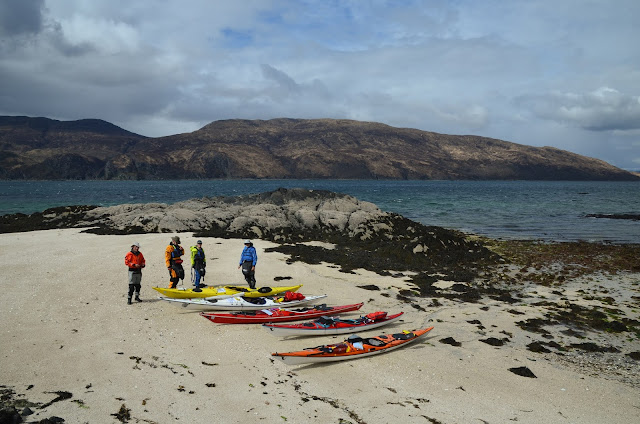 As it was low water and Springs, we had a fair carry to get the boats up - as there were five kayakers we were able to lift even the laden boats and move them in two stages; firstly up to the beach to give us time to sort our camp.  We moved them to the same place as our tents later on.  Donny anchored "Guppy" in a lagoon around a sheltered point on the other side of our camp. 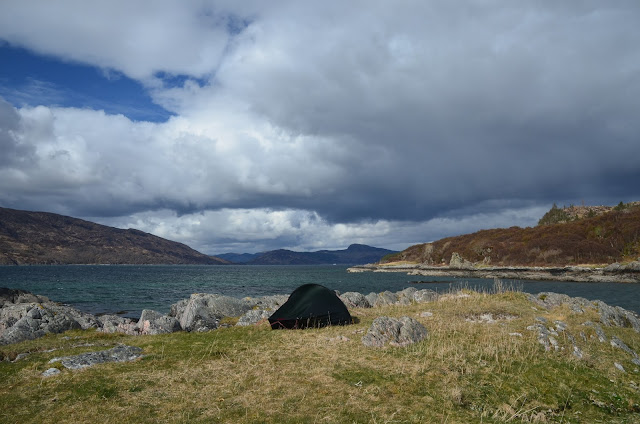 We pitched our tents and got a cup of tea on....we'd arrived and another adventure was underway! 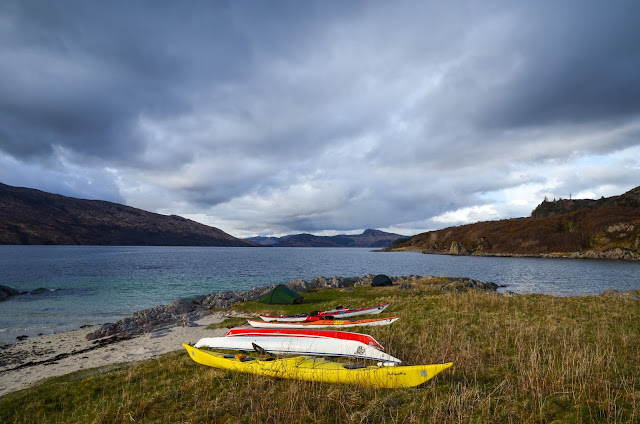 Our camp was sufficiently spacious that we had choices of where to put the tents...which is not always a good thing as several pitches looked equally promising!  To get our boats above the Spring high water mark we moved them up to the turf - which was actually a little higher than mine and Douglas' tents! 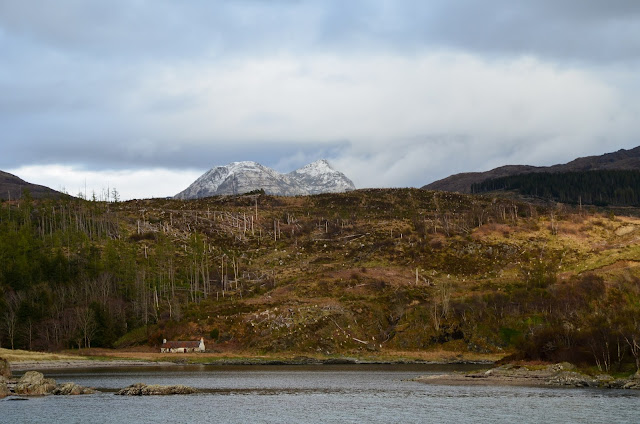 Our camp looked across a sheltered bay to a ridge, above which the upper slopes of Beinn Sgritheall (scree mountain) soared.  A couple of heavy showers blew through, sending us into our tents temporarily - and each one left more snow on the mountain. 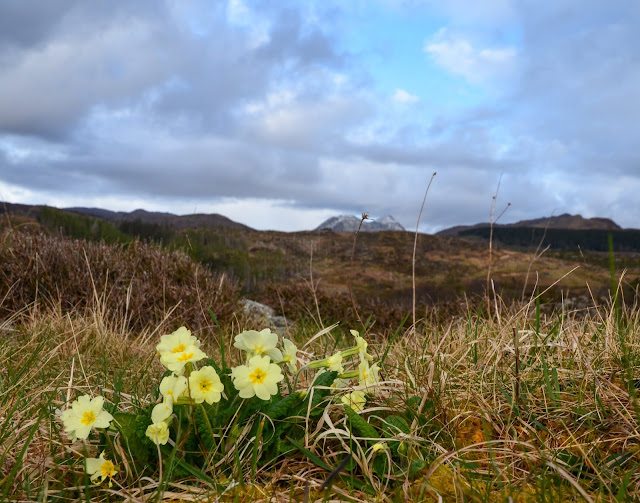 While the temperature was on the cool side, it was undoubtedly Spring.  Bright clumps of Primroses (Primula vulgaris) dotted our camp, splashes of colour among winter-bleached grasses. 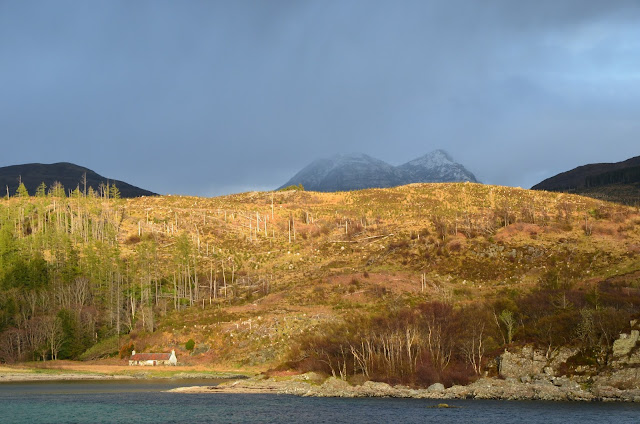 The play of light was really quite special and the occasional shower was well worth sitting out to watch the change of colour and form during the late afternoon. 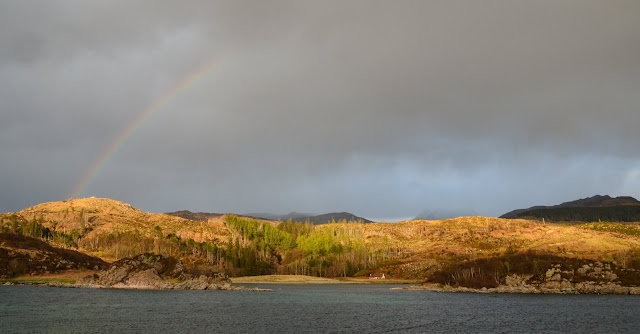 A rainbow stretched across the bay; too broad for my camera lens to get it all in as it arced up over one side..... 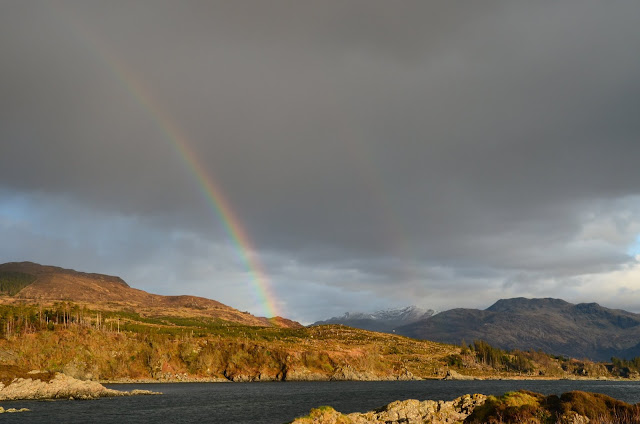 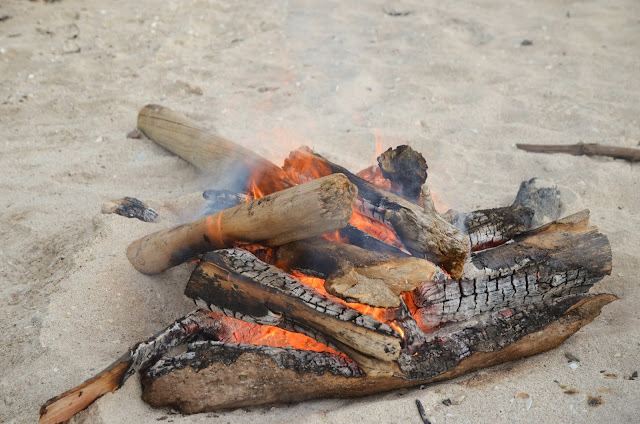 Dinner was a superb chicken casserole followed by home-made carrot cake - both courses courtesy of Lorna.  I was unsurprised to find that there were large quantities of driftwood along the shore; the absence of people around to collect it for over a year meant that we could gather what we needed from close at hand, and even to just collect the driest pieces.   The fire was lit below the high tide mark which meant that by the early hours of the morning all trace of it would be erased.  We sat long into the evening around the fire, catching up with each other after not having been together as a group for so long.  It felt so good to be away and underway.....
Posted by Ian Johnston at 21:33