Late Summer in a jar

Over the weekend we noticed that the Blackbirds and Starlings were starting to work over the Rowan (Sorbus aucuparia) trees in the garden.  As the clusters of red berries ripen it becomes a bit of a race for us to gather a basket before they all get eaten!  The berries seem irresistable to all kinds of birds and the Rowan has an interesting adaptation in that the berries need to pass through the gut of a bird before the seeds they contain will germinate.

We cooked the berries with an equal weight of cooking apples until the mixture became a thin orange porridge, then strained the lot through a cloth overnight to extract a couple of litres of rose-pink fluid.  This liquid is then boiled up in a 60:40 proportion with sugar until setting point is reached. The whole process is shown here, and the result looks like late summer in a jar! 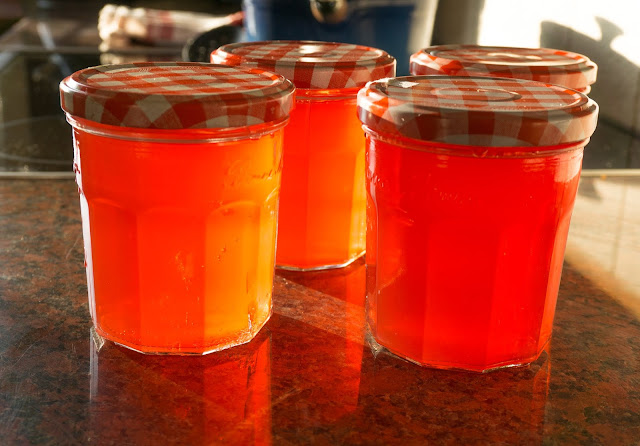 Rowan and Apple jelly goes superbly well with meats and cheeses and is the secret ingredient in our venison casseroles.  It needs to mature for a few weeks and will keep for a year, slowly darkening in colour.

It had been a bit of a surprise to see the birds begin eating the berries in the first couple of days of September - we felt it was earlier than usual.  We still had a jar of jelly left from 2018's crop which was dated 15 September, and looking further back over the blog to 2016 and 2012's entries it certainly seems that the "normal" date we've made this preserve has been in the second half of September.
Posted by Ian Johnston at 20:49