Top to top to Tap

I'm lucky to have Bennachie as a neighbour. One of the most prominent hills in the north east of Scotland, a glimpse of the distinctive outline of the Mither Tap (Mother Top) means "home" to generations of Aberdeenshire folk.  Bennachie inspires a real fondness in people and there's even a dedicated band of volunteers known as the Bailies of Bennachie who look after the hill and its environs.  I climb it regularly by a variety of routes, but there was one which I hadn't done.

Lorna, Allan and I met up on a bright late summer day to do one of the longest routes on Bennachie, a traverse from one end to the other of what's essentially a long ridge with a number of "tops".  They live closer to the hill than me and have a clear view of it from their house - a very desirable feature in any property I feel!

We pre-positioned a car at the end of our intended walk and drove back west to the top of a feature known as the "Lord's Throat", a wooded valley carrying a minor road.  A rough track leads to a sand quarry and after a bit of scratching about we climbed above the quarry and onto the open hill above.  a view opens up straight away to the furthest tops of Bennachie above the valley of the River Don. 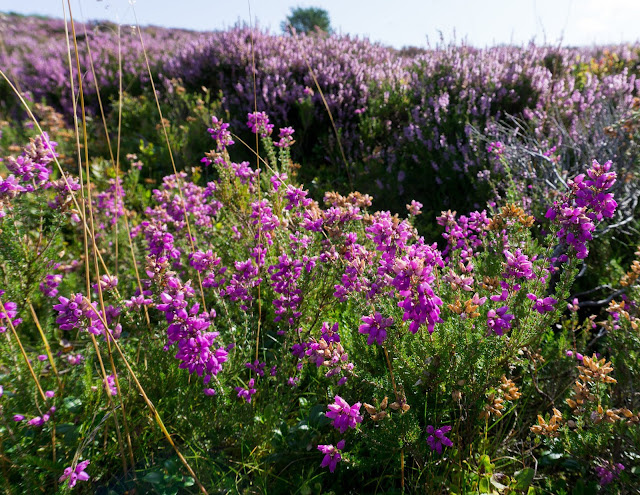 The heathers were all in full bloom, the colours stunning.  This is the larger flowered Bell Heather (Erica cinerea)..... 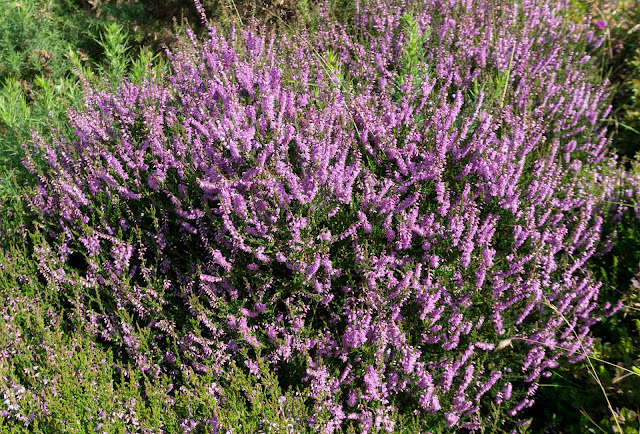 ...and this is the more ubiquitous Ling heather (Calluna vulgaris).  As we walked our boots raised clouds of honey-scented pollen and one of the dominant sounds was that of the bees collecting pollen - we saw several species on this part of the hill. 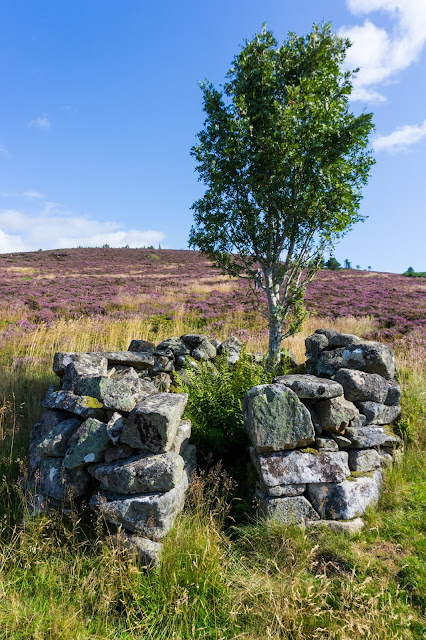 This is a corner of the hill I hadn't previously walked and I was intrigued by a line of very old and long-disused shooting butts arranged in a line upslope.  Drystone built, the may have been turfed on top when in use and each had an offset entrance for the "gun".  Interestingly, almost every one harboured a Rowan tree.  Rowan (Sorbus aucuparia) seeds germinate in an interesting way; if you plant them they just won't grow.  The seeds are contained in a bright red berry which are irresistible to many species of birds.  the berry and seed must first pass through the gut of a bird in order to germinate; and of course will benefit from having a blob of guano fertiliser to boost its chances.  The berries are irresistible to some humans too - they make a superb jelly to accompany meats and cheeses!

Rowans are one of the most common trees in Scotland, and are the tree which reaches higher altitudes than any other species here - up to 870m/2850ft in a few places.  There's a rich folklore surrounding the tree; it's associated with protection and was commonly planted at the gable end of a house to afford protection from witchcraft in particular.  Rowans rarely live longer than 150 years so it's possible to guess the dates of some ruins by the Rowans near to them.  Here, in a lovely piece of symmetry, the works of man provide protection for the Rowan - the seeds dropped by a bird have fallen into the grouse butts and the seedlings have grown within the circular embrace of the wall, protected from weather and from browsing animals until well established. 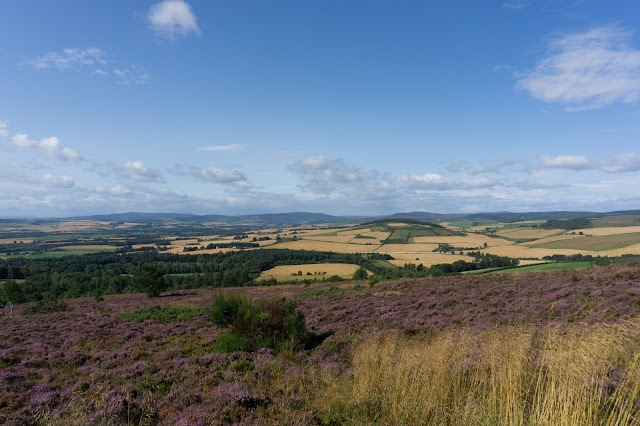 From near the summit of the first "top", Black Hill, there's a wide view over the Aberdeenshire countryside.  Due to its relative isolation from surrounding high ground such good views are a feature of the whole of Bennachie. 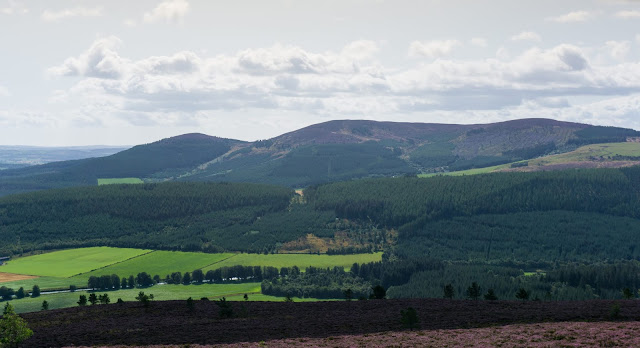 From Black Hill the ridge proper swings into an east-west orientation and as we continued west the views just kept coming.  We took a slight detour to the "top" of Hermit Seat (who was the hermit I wonder and what was his story?) and past Hummel Craig.  A Hummel is a stag with no antlers and Craig is a derivation of Crag.   From the next "top" of Watch Craig we looked over the valley of the River Don to Pitfichie Hill and Cairn William.  Allan and Lorna were just able to see their house from this point! 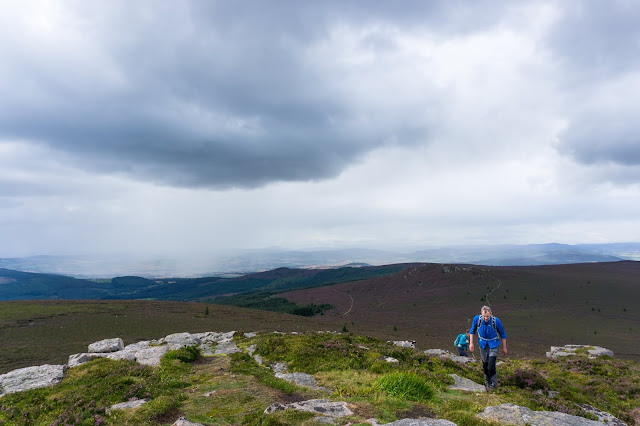 Once up on the higher ground the paths on Bennachie are really good going and distance just reels away.  In quicker time than we'd anticipated we found ourselves on the rocky tor of Oxen Craig. At a modest 528m/1736ft this is the highest point of Bennachie but probably visited by only a small percentage of the folk who climb "Bennachie".  Behind us rain showers were strafing the land further west...it seemed we'd probably get wet before the day was done. 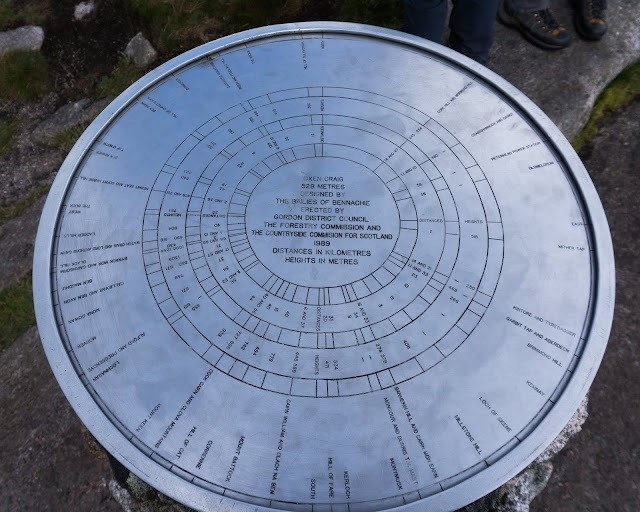 A view indicator plaque identifies some of the hills and key features to be seen from Oxen Craig, including some at considerable distance.  The view ranges from the city of Aberdeen in the east, round to the hills of Angus in the south, to the Cairngorm giants almost 70 kilometres away and round north to Peterhead and the Buchan coast - an enormous sweep of the northeast of Scotland. 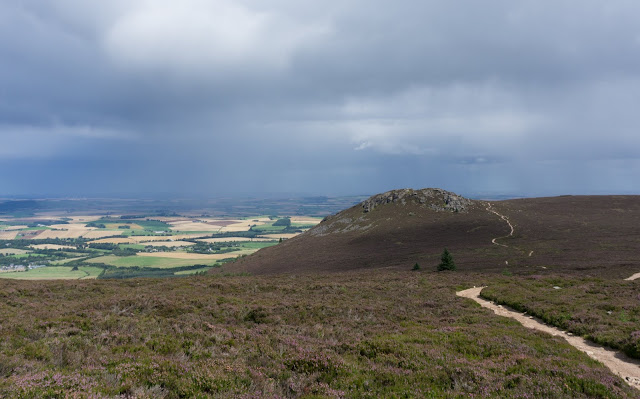 We sat out a shower below Oxen Craig and once it had passed headed slightly off the main line of the ridge to another "top", Craig Shannoch. 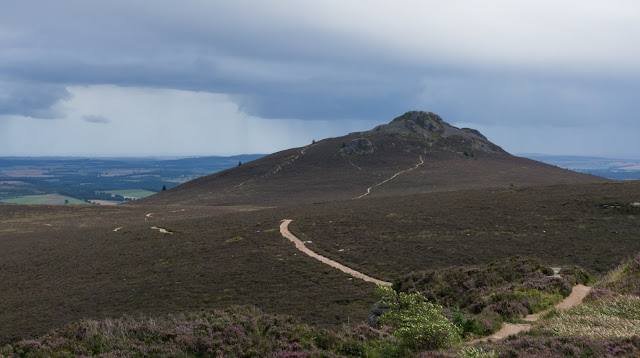 From Craig Shannoch there's a good view across to the main attraction of any walk on Bennachie - the Mither Tap.  In fact the Mither Tap is Bennachie for most folk; the name of the whole hill is a derivation of Beinn a' Chioch (hill of the breast) and it's the Mither tap which is the most visible, most prominent feature.  Across a huge swathe of Aberdeenshire you can look for it - the eye instinctively drawn to a familiar outline.  Bennachie, always Bennachie - it's what inspires such affection for the hill.  The Tap is a granite plug from the heart of a long ago eroded volcano and has considerable steep drops on three sides.  I'd guess that only about one in a hundred people who climb the Mither tap go on to walk to the "real" summit of Oxen Craig - such is the draw of the Tap. 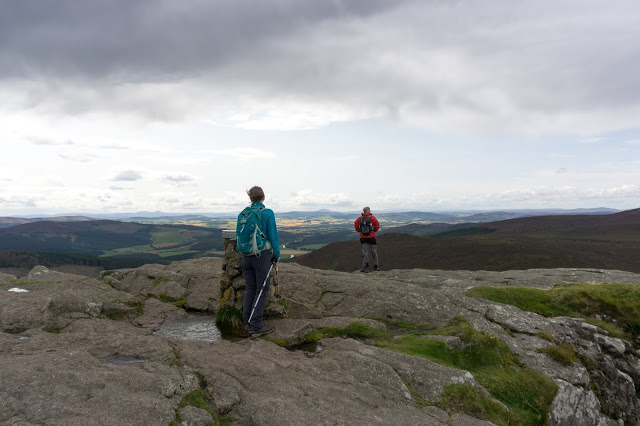 We climbed to the summit, almost able to lean on a tearing westerly wind.  We'd traversed top to top to reach the Tap, a fitting end to the high ground of Bennachie. 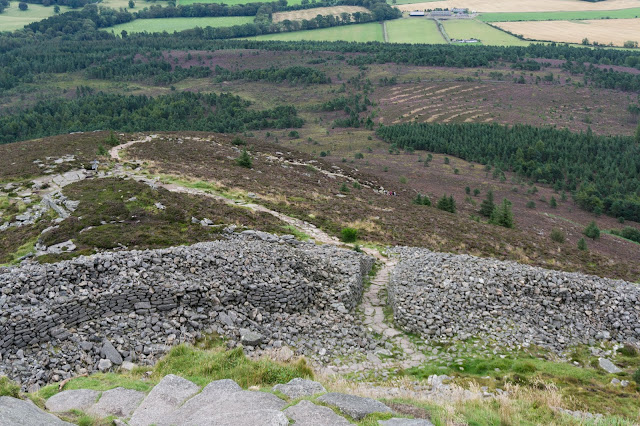 This place has a long history of use.  Being so prominent prompted the building a hillfort here.  Constructed during the Iron age and possibly occupied as early as 1000BC, it seems to have been developed for a long period and may have been the site of the battle of Mons Graupius (which gave its name to the Grampian region and mountain range) where the Picts were heavily defeated by a Roman army.  The aerial pictures on the Canmore site show the extent of the ruins. 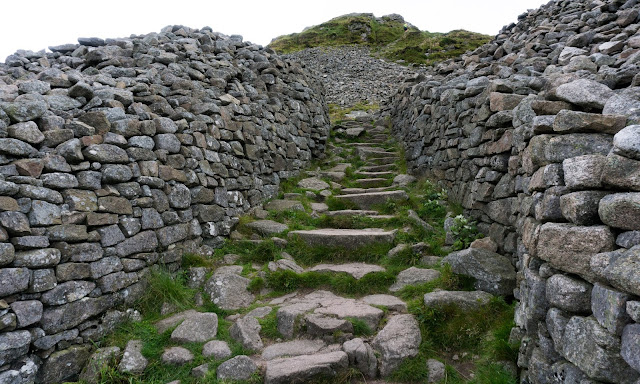 The curving entrance to the upper fort is particularly well preserved - here you can really walk through ancient history. 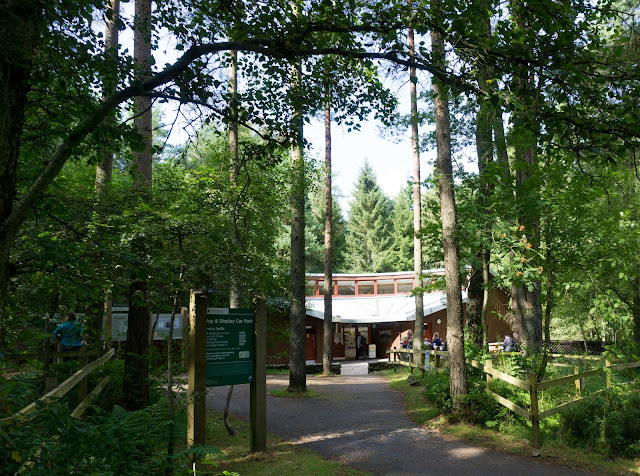 The descent from the Mither Tap to the Bennachie Centre is knee-jarring, steep and in places rough.  Although the shortest route in terms of time and distance I've always thought this the least attractive way to climb the Mither tap.  There are a number of ways to reach the Tap, as shown on this downloadable map, or you could always do our longer route of around 10kms!  We'd enjoyed a superb day doing this route; it's one all three of us will repeat.
Posted by Ian Johnston at 21:12