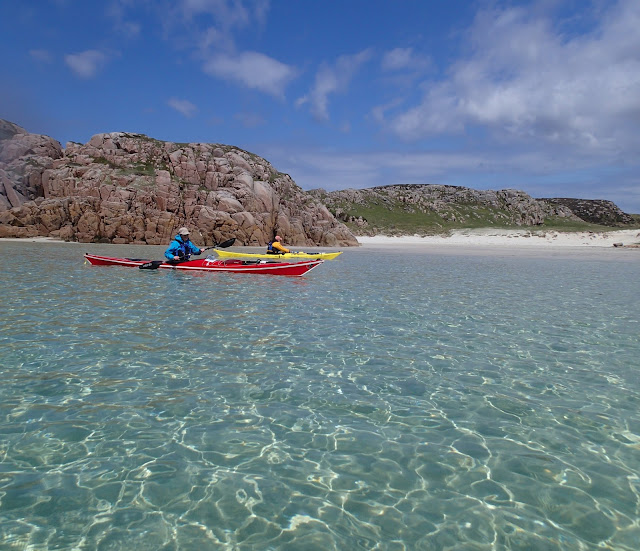 After an extended luncheon stop at Balfour's Bay on Erraid we got back into the boats to continue along the south coast of the Ross of Mull.  We had no specific goal in mind, just to explore the coast and then turn around to head back to Fidden.  If you visit this bay on a sunny day such this - you'll find it a hard spot to leave! 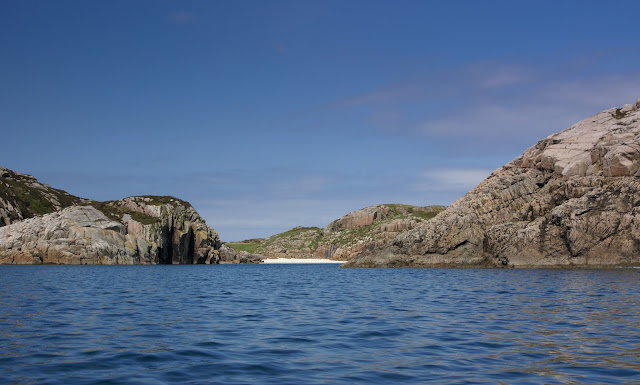 As we headed east along the rocky shore there were intruiging glimpses into other small sandy bays - it's a stretch of coast where many hours can be spent; short paddles between stunning beaches. 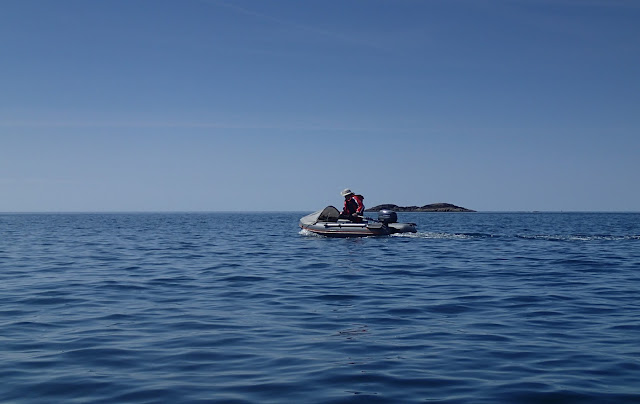 Donald went ahead in his F-RIB, intending to visit a couple of the larger skerries which form the inner part of the Torran Rocks. 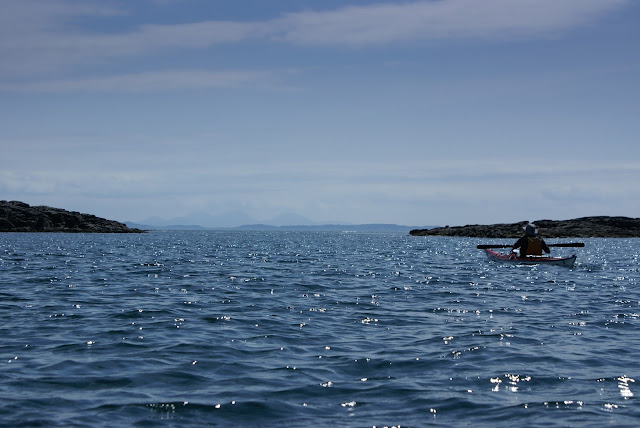 As we followed at a slower pace, Douglas and I spotted a familiar silhouette through the haze on the horizon..... 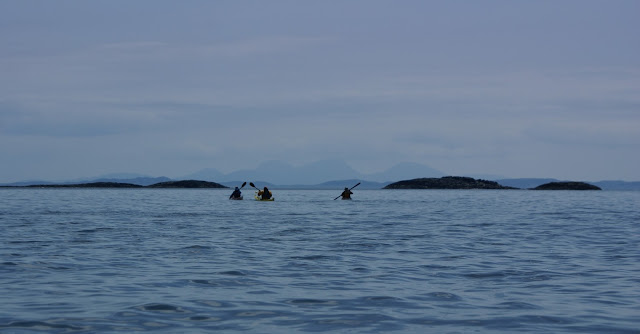 ...beyond the skerries and the low-lying shape of Colonsay rose the unmistakeable outline of the Paps of Jura. Our memories of a superb Spring trip to Jura still were still fresh - a place I'm very keen to return to!

In the foreground are some of the innermost skerries of the Torran Rocks.  This scattered group of rocks, islets and reefs lies to the south of the Ross of Mull to an extent of some 25 square kilometres.  They're well named - Torran is "Thunder" in Gaelic and a hint of the nature of the reef system can be found in some of the individual rock names such as "MacPhail's Anvil".  The largest of the rocks are up to 10 metres above high water but many are hidden and for every rock and hazard which shows above the surface there's as much shoal water below.  Hamish Haswell-Smith, in his indispensable guide "The Scottish Islands" describes the Torran Rocks as "scattered over a wide area like dragon's teeth.  They lurk menacingly just below the surface, occasionally showing themselves in a froth of white spittle".

Part of the reason that the Torrans are such a hazard to shipping is that they lie right in the track of vessels heading to and from the Firth of Lorn and up and down the west coast of Mull, as can be seen from this large scale map.   It was in response to the mounting toll of shipwrecks in the 19th century that the Northern Lighthouse Board authorised Thomas Stevenson to build the Dubh Artach light, one of the great "sea lights", it bridges the gap between the lighthouses at Rhinns of Islay and Skerryvore.

There is a passage between the Torran Rocks and the Ross of Mull, normally used by smaller vessels.  Coming up over our right shoulders, a rather larger vessel was rapidly overhauling us..... 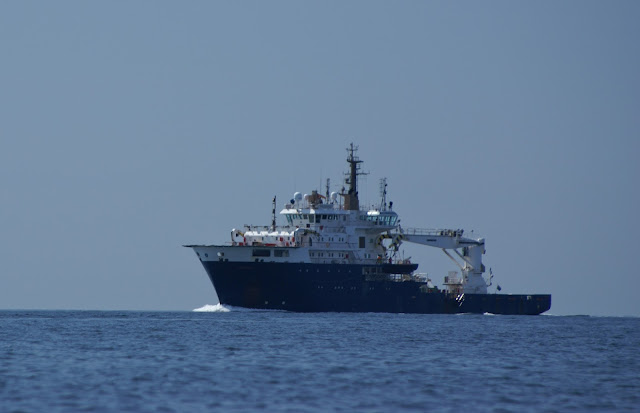 ..she's the Northern Lighthouse Board's tender "Pharos", one of two large vessels operated by the NLB.  She's 84 metres long with a beam of 16.5 metres, but a shallow draught of just 4.5 metres which enables her to operate close inshore.  We figured that if any vessel would have knowledge of the intricacies of the coastal routes around Scotland, it would be "Pharos"! 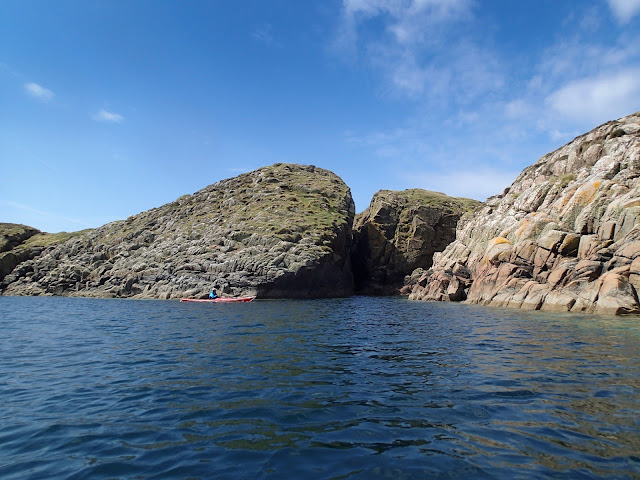 We next came to Eilean a' Chalmain (Dove island), a rocky place where we found this rock formation resembling a frozen wave. 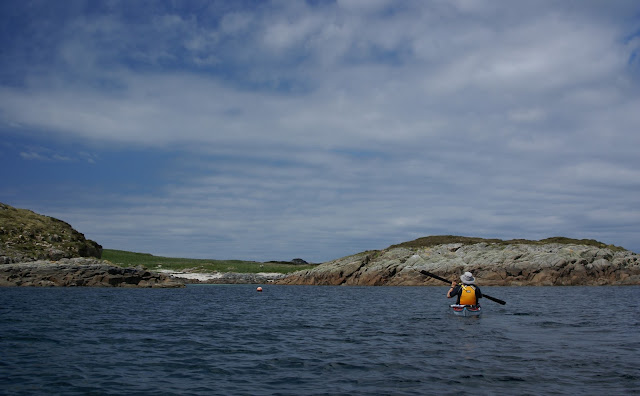 Hidden on the east side of the island, Douglas knew of a possible landing place, and sure enough a flash of white sand backed with grass was tucked into in a corner of the island. 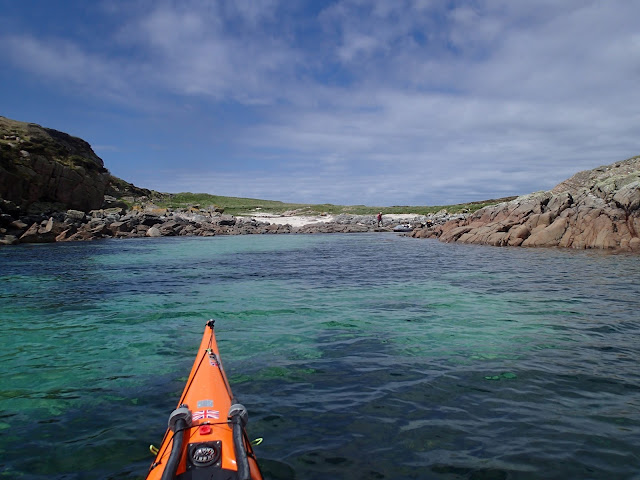 At first the landing appeared to be blocked by boulders....... 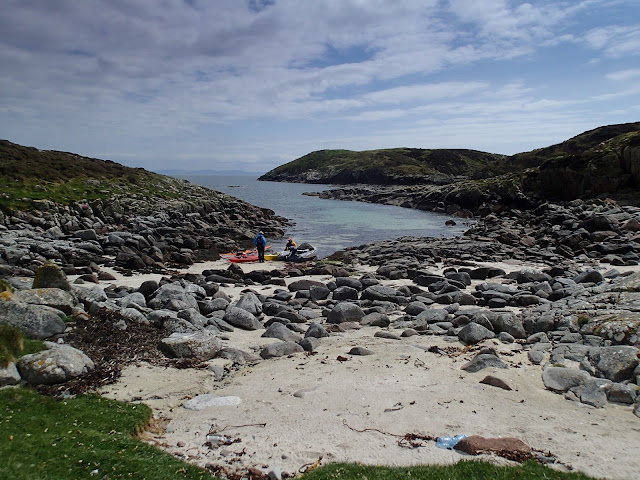 ...... but we found a strip of sand just large enough for us all to land and stretch our legs. 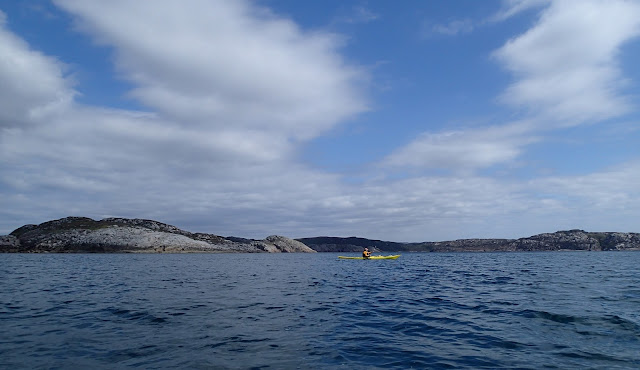 We now decided to head a little further along the coast to visit one of the two beaches named "Traigh Geal" (white beach) - there's always time on a  sunny day for another beach!  As we left Eilean a' Chalmain though, the sky to the north told of a coming change in the weather as a cloud-sheet reached across the Ross of Mull towards us.  Perhaps our luck with the sunshine had run out....