The third day of our visit to the Ross of Mull and Iona dawned fine and sunny with a forecast of increasing northerly wind in the afternoon. We hoped to cross back to Iona and visit the Abbey before the day visitors crossed from Mull on the Calmac ferry....but as we took breakfast an altogether larger vessel full of visitors arrived in the Sound of Iona and anchored... 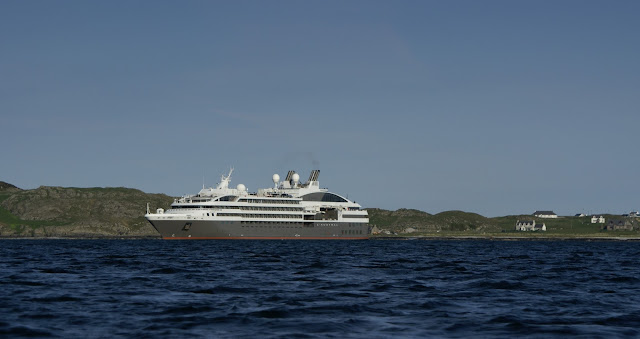 If we wanted a crowd-free experience at the Abbey and the other historical sites of Iona, it would be far better to get there before the cruise passengers! 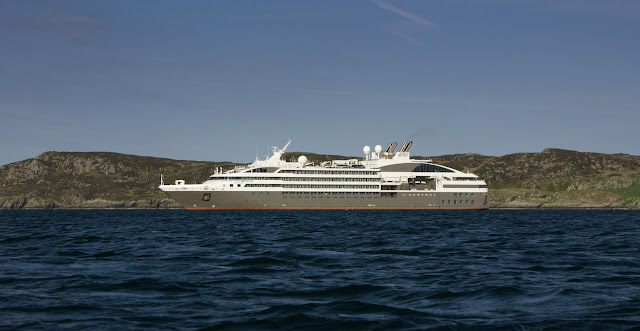 L'Austral is a French owned cruise ship - described by her owners Ponant as a "mega yacht".  She's registered in the  French Polynesian islands of Wallis Futuna and flies a French tricoleur ensign.  She's 142m long with a beam of 18m and can carry up to 264 passengers in her 132 luxury cabins supported by a crew of 139. 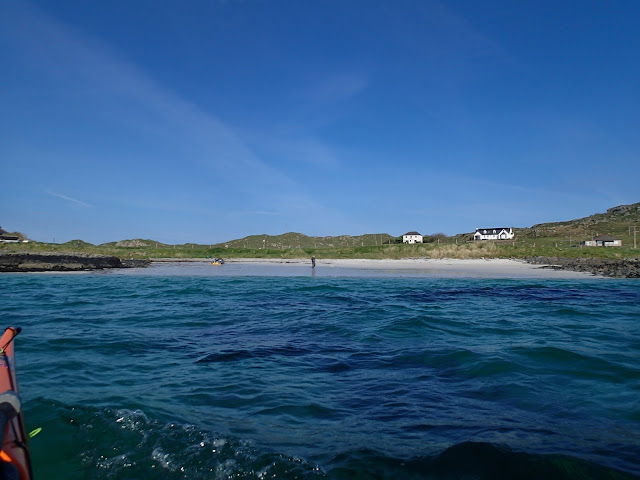 Our boats are a maximum of 5.25m (less in the case of Donald's F-RIB) and each carry one crew member in (comparative) luxury.......

We were on the water shortly after breakfast and made another crossing of the Sound of Iona, aiming for the beach just south of the main settlement on the island - Baile Mor (Big Town).  Donald crossed ahead of us and made use of an inflatable roller to move his boat up above the high water mark. 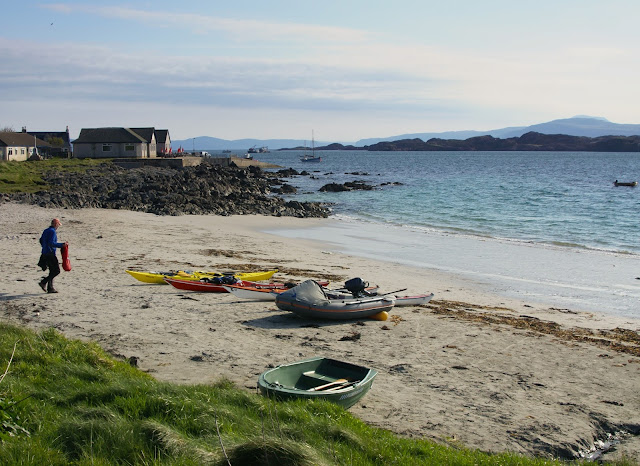 This beach is one of the better known on Iona, if not the most scenic.  In 862 the monastery on Iona suffered one of a series of Viking raids and 68 monks were killed on this beach, which is known as Port Nam Mairtir, or Martyr's Bay.

Our intention in landing at Port nam Mairtir was much more peaceful than that of the Vikings, but nevertheless we were in a hurry to get to the Abbey before the crowds arrived, so we headed straight from the beach towards past the village of Baile Mor. 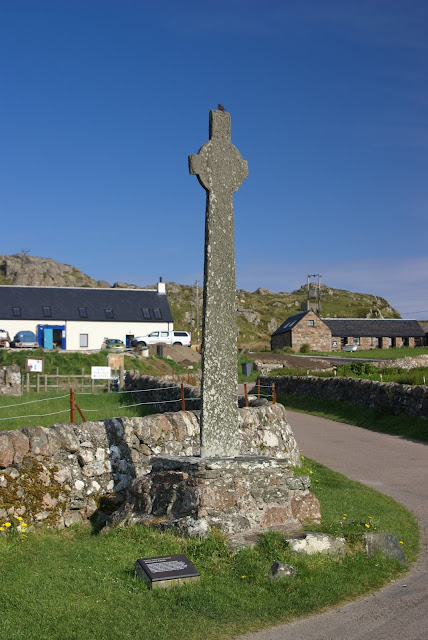 Iona is particularly rich in stone crosses, some of them very old.  The first we came to is by no means the oldest but is striking nevertheless. Set at the side of the road to the Abbey, McLean's Cross dates from around 1500 and was placed where mediaeval pilgrims could pray as they approached the abbey.  On the face the cross bears interlace designs sprouting from the tails of two two fantastical beasts, the reverse has a crucifixion scene.  The McLeans were a powerful clan in the mediaeval period and this cross was paid for by them as a public show of wealth and piety. 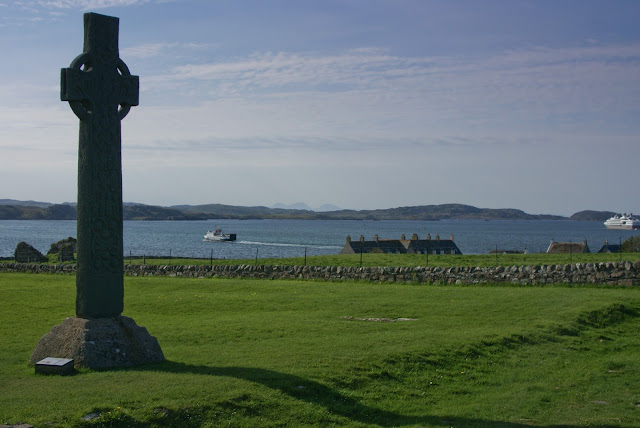 The mix of tourism and religious sites is a curious one and Iona's Abbey is certainly something of a tourist honeypot with significant entrance charges. The Abbey wasn't yet open for visitors when we arrived, but it's possible to visit most of the site outside "opening times" and we left a small donation towards upkeep of the site.

The ground on the landward side of the abbey contains the largest of the crosses and the largest carved cross still in situ, the impressive St Martin's cross.  Carved from a single piece of grey epidorite stone which is possibly from Argyll, it has stood overlooking the Sound of Iona and the many crossings of vessels for over 1200 years.  The east face is carved with biblical scenes in low relief........ 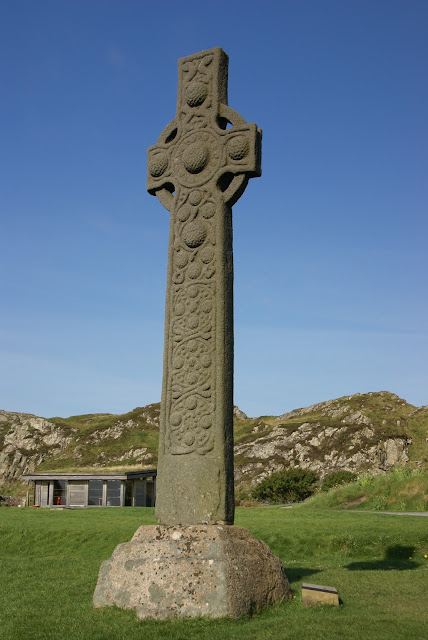 ..while the west face is carved with bosses and interlaced serpents.  The arms of the cross have slots which may have held either extensions or decorative panels.  The distinctive cross and circle design is a feature of "Celtic" crosses and may well have its origins right at the opening period of Chrisitanity in the west of Europe.

The Celtic church sought to convert the poulation to Christianity and one of the ways which this process could be assisted was by incorporating exiting pagan sites and symbols into the new religion.  Building churches and monasteries near to or over the top of pagan ritual sites was quite common, and it's thought that the circle symbol associated with sun worship may have been incorporated into the Christian cross to produce what we now recognise as a Celtic cross. 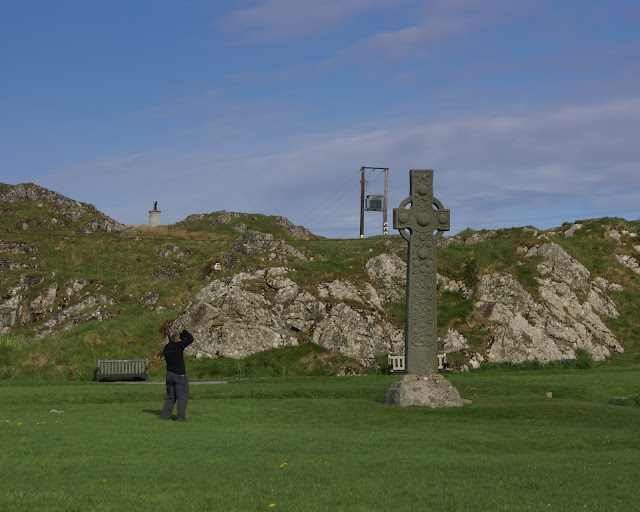 At 4.3 metres tall, St Martin's is a very impressive cross and given its age, is in remarkably good condition. 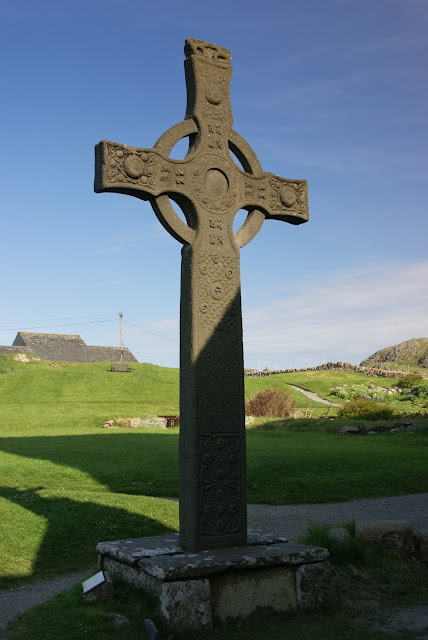 The next cross we visited looks old but is in fact a replica.  St John's cross was erected around AD700, at about the same time as the small chapel of St Columba's shrine.  It was carefully positioned so that late in the day a shadow of the cross is projected onto the doorway of the shrine chapel, emphasising the sanctity of the place.  The use of this chapel which is believed to be the burial place of Columba is enduring and we didn't enter because a lady was inside at quiet prayer. 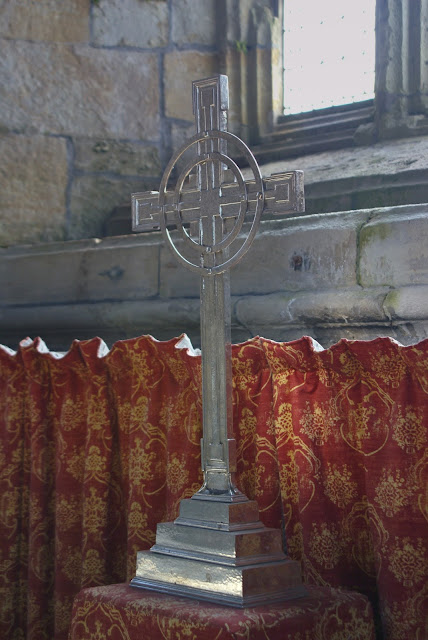 Inside the Abbey church itself, on top of a comparatively modern Communion table made from Iona marble is this fine silver cross, again in a Celtic style........ 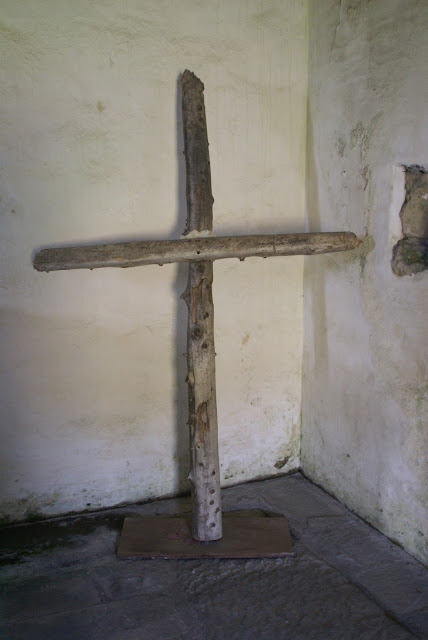 ...and in seeming contrast to the simple wooden cross standing in St Oran's chapel, where some of the graves of the Lords of the Isles are marked.

There are more crosses to be seen at the Abbey museum including some of the oldest, but it was too early in the day for this to be open.
Posted by Ian Johnston at 15:20