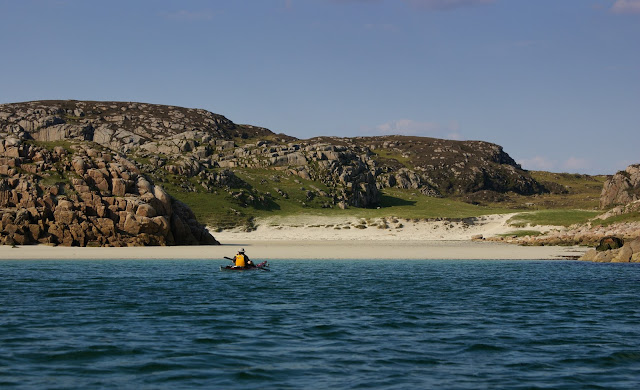 This beautiful bay at the south of Erraid is marked on Ordnance Survey maps as Traigh Gheal (White Beach), but is better known as "David Balfour's Bay" after the principal character in Robert Louis Stevenson's novel "Kidnapped".

Robert Louis Stevenson (RLS) was born in 1850 into a famous dynasty of lighthouse builders.  His father Thomas was one of three brothers active in the Stevenson firm at the time - Alan had completed the Skerryvore lighthouse southwest of Tiree in 1844, considered by many to be the most graceful and technically perfect lighthouse anywhere in the world.  In 1867 Thomas and another brother David were joint Engineers to the Northern Lighthouse Board (NLB) and were appointed to oversee construction of a tower light on the Dubh Heartach (now spelled Dubh Artach) rocks, along with the Engineer who would supervise most of the actual construction, Alan Brebner.

Dubh Artach is a boss of black basalt at the outer edge of an extensive reef system which includes the Torran (Thunder) rocks which extend out from the Ross of Mull for many miles.  As can be seen in this large scale map, the rocks lie right in the track of vessels heading to and from the Firth of Lorne and heading from the Atlantic to the North Channel for the ports of the Clyde and the Mersey.  Erraid was chosen as the shore base and the quarry for Dubh Artach, the granite was of excellent quality and there was a shelter for the shore works.  A small village and port was established to load the cut stones, the Stevenson "template" was to try out the precise fit of each interlocking stone (which weighed several tons each) prior to shipping out to the rock.

In 1870 a rather reluctant RLS found himself on Erraid understudying his father and uncle.  He had little interest in the family lighthouse trade, preferring instead travel and writing.  This was anathema to the Victorian values of hard work and service by which Thomas Stevenson lived and RLS' failure to accede to his father's desire for him to follow the lighthouse trade would be the result of many quarrels and would strain their relationship to the end of Thomas' life.  In his own later life, RLS came to appreciate the towering achievements of his family much more and looked back on his time touring the lights and on Erraid with some fondness.  The Dubh Artach light was completed and lit in 1872.  Automated in 1971, it still shines out its two white flashes every 30 seconds, visible for 20 nautical miles.  The author Bella Bathurst has written a very readable book covering of some of the Stevenson lighthouses, including chapters on the construction of Skerryvore and Dubh Artach.

RLS didn't waste his leisure time on Erraid in 1870 and must have explored the island thoroughly when not engaged in his apprenticeship.  He had a real skill of observation and used what he saw to good effect when he wrote "Kidnapped" in 1886.  In one of the most memorable parts of the book David Balfour and Alan Breck Stewart find themselves unwilling passengers onboard the brig "Covenant" which is caught among the Torran Rocks in a gale at night, the bursting spray all around the ship lit by moonlight.  Despite desperate efforts to win clear, the "Covenant" is driven onto a reef and wrecked.  David is thrown into the sea and survives drowning by clutching onto a broken spar.  It is at Traigh Gheal he is washed up, exhausted and freezing.  He then spends several wretched days surviving on shellfish, which make him very ill, believing he will die on the island before two Gaelic fishermen make him understand that Erraid is a tidal island (the name is from the Gaelic Arthraigh meaning just that) and he manages to wade ashore to the Ross of Mull where his adventures continue.  The combination of historical fact, vivid description of actual places and great paced adventure make "Kidnapped" my favourite of all RLS' novels. 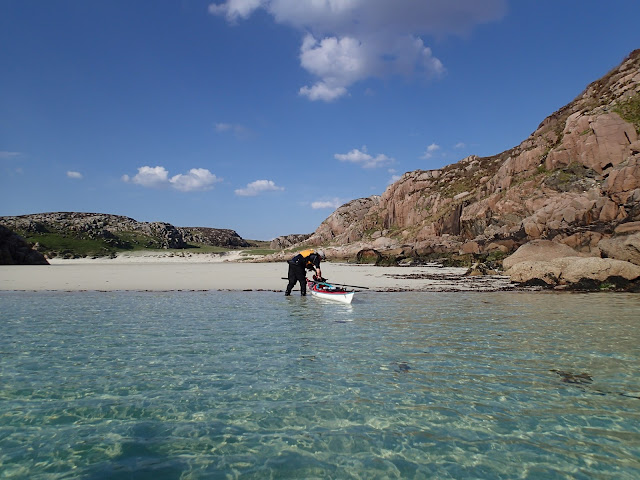 Our own landing at Traigh Gheal was something of a contrast to David Balfour's - we landed in hot sunshine on an early summer afternoon with everything we needed for immediate comfort! 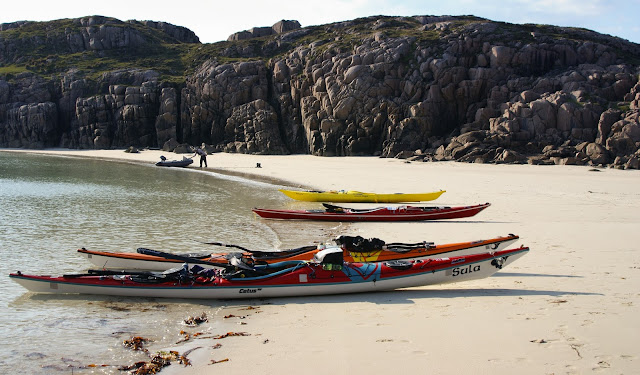 Once our boats were drawn up on the white sands we took our gear up to some nearby rocks...... 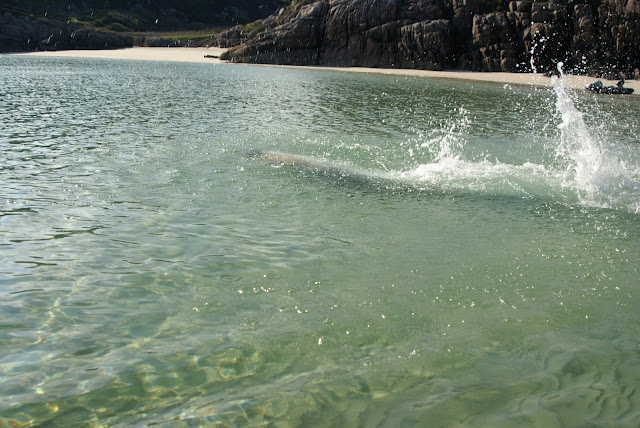 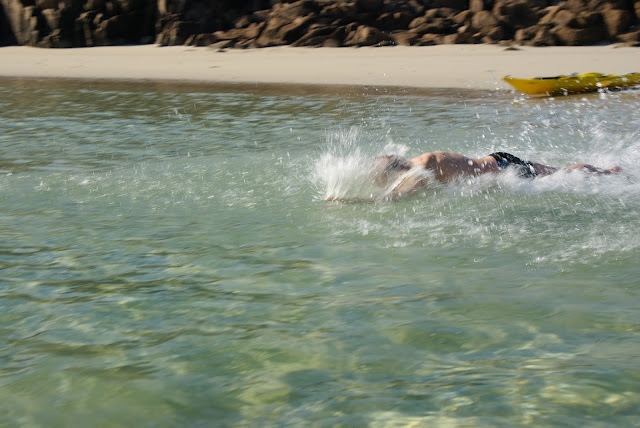 .......emulated David Balfour in taking a swim.  We can report that the water was beautifully clear, and on the refreshing side of cool.  The contrast of an air temperature of 24 Celcius and a water temperature of 9 degrees Celcius produced a stinging exhilaration, and we didn't linger too long before heading up to sit and dry off in the sunshine whilst taking a late second luncheon. 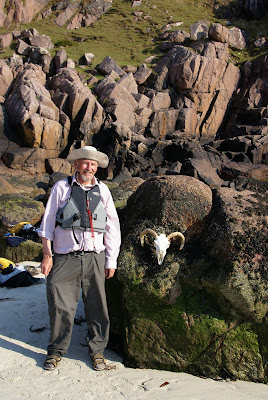 Donald had been doing a little exploring while we swam, which had clearly left him with a healthy appetite.  He felt no desire to further emulate David Balfour in eating raw limpets, but had obviously enjoyed his light lunch.........  :o)

After lingering at Balfour's Bay for an hour or so we packed the boats with some reluctance - on a day such as this it's a hard place to leave. 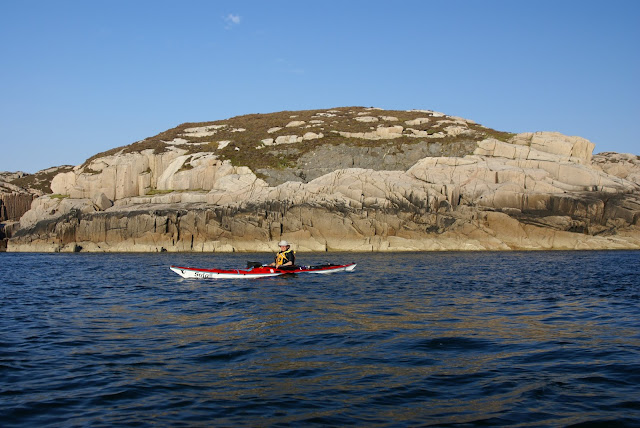 Heading back around the tip of Erraid we had the choice of either heading directly back to Fidden via the Tinker's Hole to have an early dinner, or exploring the skerries and islands off Erraid and cooking dinner later.  With such lovely weather and daylight until at least 2200, this really wasn't a hard decision to make, so we headed out into the maze of rocky outcrops west of Erraid..... 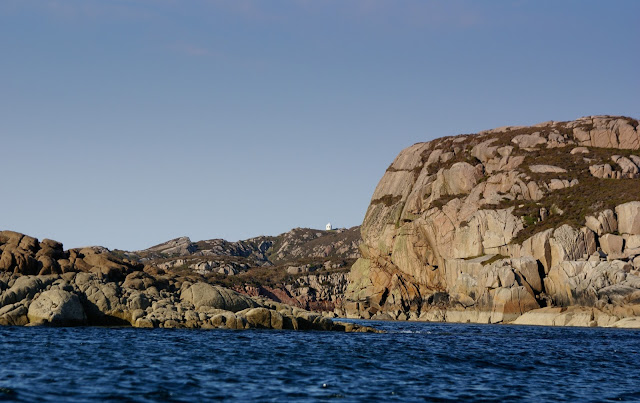 ....passing the entrance to the Tinker's Hole channel.  On the highest point of Erraid, the small white tower is the former observatory and signal station used to communicate with the Dubh Artach light and, when the station at Hynish in Tiree closed, Skerryvore.  With the advent of radio, signalling was moved to Oban and the observatory fell into disuse but has been well preserved. 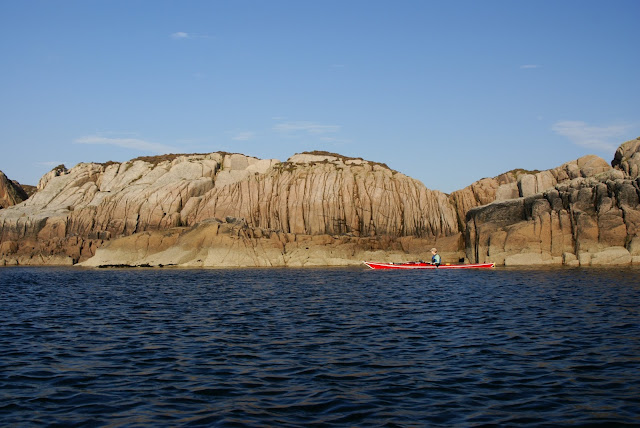 We started up the chain of small islands, looking for a spot Douglas had mentioned as being worth visiting.... if we could find it!