Finding our marbles on Iona

The second day of our sea kayaking trip to Iona was forecast to be another sunny day with a fresh breeze towards late afternoon.  We were on the water soon after breakfast and headed north a little way up the coast of the Ross of Mull before heading out across the Sound of Iona.  This crossing isn't a long one but has a reputation for rough water due to a combination of tidal movement and shallow depth.  When the wind is against the tide here overfalls and rough water can be expected.

We crossed in calm conditions with a light breeze and we were able to enjoy the views up the Sound to Iona's famous abbey church. 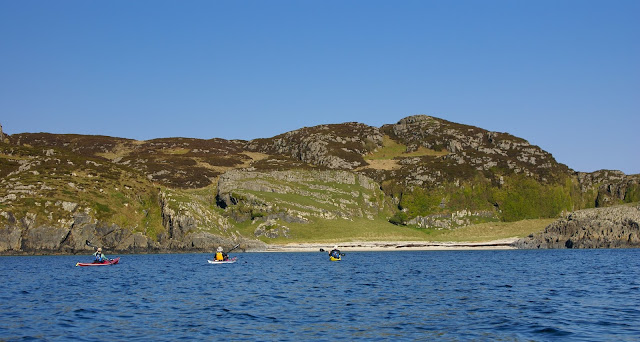 We headed straight for the prominent white sands of Traigh Mhor (big beach!) for our first landfall on Iona, and as we began to enter shallower water........ 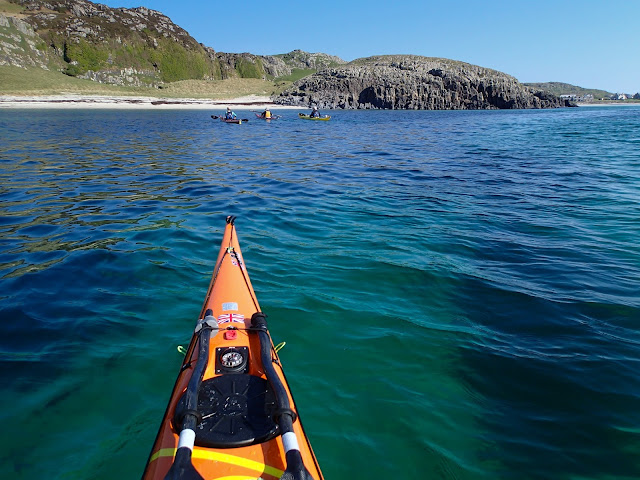 ....the colours of the seabed began to appear beneath us - what a morning it was to be out on the water! 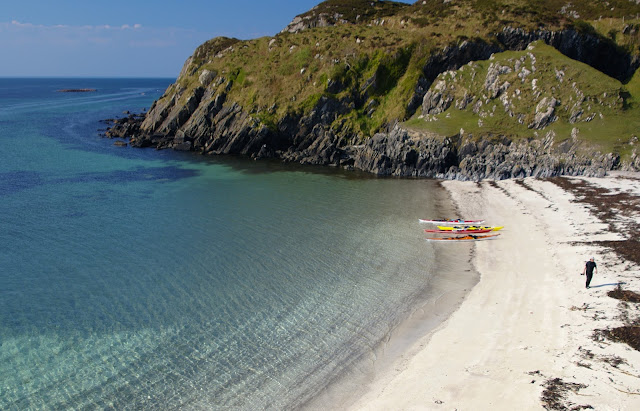 We climbed up onto a grassy mound forming the north end of the beach to look down on our boats drawn up on white sand above crystal clear water.  This was to be the first of many beaches we'd land on during the day and each one had this jewel-like quality. 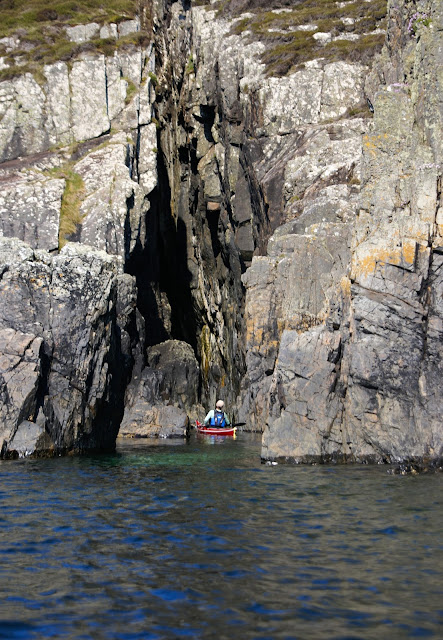 The Iona coast south of Traigh Mhor is rocky with some cliffs and geos.  We took our time and explored wherever it was possible to paddle...... 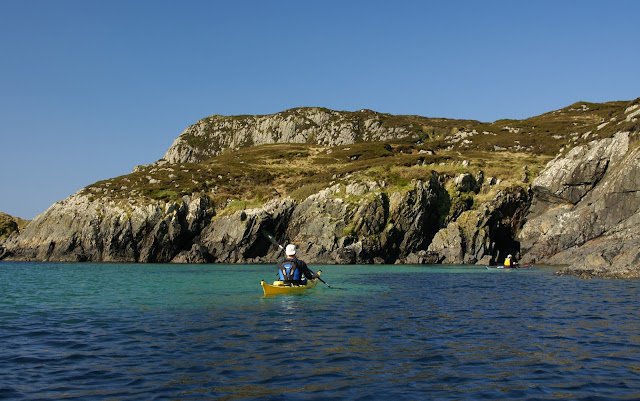 ...and took time to enjoy the view below, the colours of the sea and the warm sunshine. 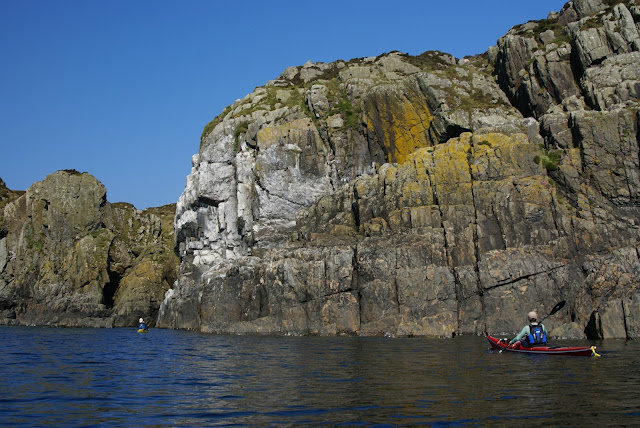 On the east coast of Iona the bedrock is Precambrian sedimentary rock, mainly heavily metamorphosed sandstones, siltstone and limestones of a similar age to the Torridonian sandstones of north-west Scotland, while the southern end, the west and north is formed of ancient Lewisian gneiss.  There's a useful guidebook to the geology of Mull and Iona produced by Scottish Natural Heritage (SNH) which can be downloaded free here. 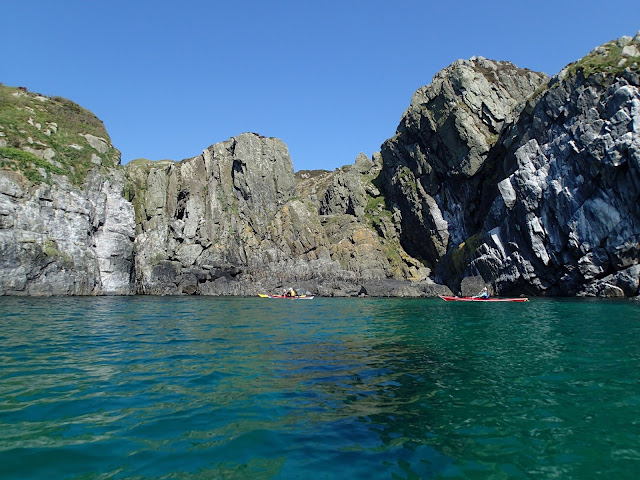 The crumpled rock forms slabby cliffs, grey in colour and streaked with white from the many seabirds which nest on the ledges.  It's a complete contrast in colour to the bright pink rocks of the Ross of Mull....... 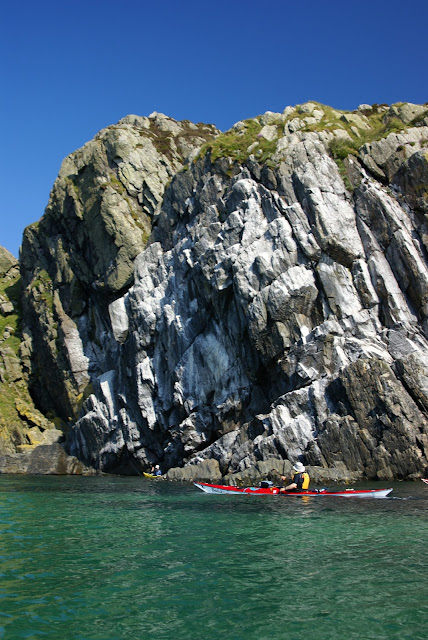 ...but has its own attractions - especially for the seabirds.  We paddled slowly southwards, looking for a type of rock long associated with the island of Iona...... 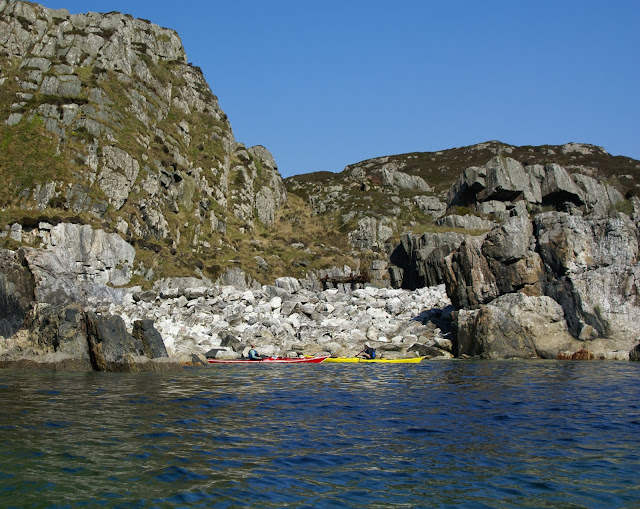 ...and finally "found our marbles" in this small bay.  One of the constituent rocks here is a limestone  metamorphosed into a fine marble containing streaks of white and green.  It was quarried from mediaeval times until the early 20th century and was often used for ornamental pieces - a large slab forms the communion table in Iona Abbey church. We could still see remains of the quarry machinery, cranes and wires among the jumble of blocks.

"Iona Marble" souvenirs are found for sale on the island and elsewhere, but almost all of the rock used for these today is from Connemara - perhaps appropriate given that Columba himself came from Ireland!

All too soon we found ourselves at the south end of Iona and the lure of seeing what might be around the next corner or headland drew us on.  The rock type had changed to Gneiss, but the sea kayaking was better than "nice"...........
Posted by Ian Johnston at 11:23